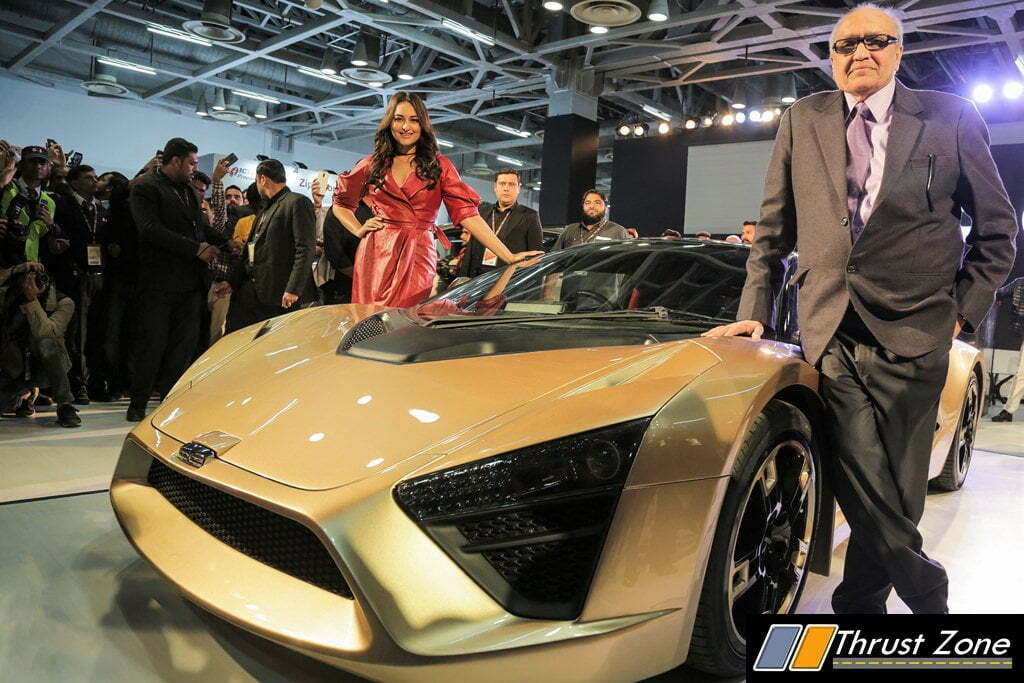 DC TCA Sports Car unveiled at the 2018 Auto Expo by Sonakshi Sinha. The name stands for Titanium, Carbon and Aluminium

At the 2018 Auto Expo Dilip Chhabria took us by a storm by unveiling its new sports car. This latest addition to DC’s stable is known as TCA which is the short name for Titanium, Carbon and Aluminium. Avanti, DC’s first production car saw its fair amount of success and with the launch of the TCA, Dilip Chhabria aims to take things to a higher level.

Sonakshi Sinha unveiled the TCA at the event along with its creator Dilip Chhabria. DC has offered the TCA with enough luxury features and yes it is a mid-engine sports car. In addition to this, TCA also gets some carbon fibre elements.

The design of the TCA takes inspiration from Ferrari’s La Ferrari and the Pagani Zonda. TCA’s bodywork gets many fast lines and adding to the sporty look is the low slung stance. The front fascia gets a large air dam and smoked projector headlights, while the side profile gets a TCA badging at the door and the tri-colour emblem at the rear window. The TCA rides on a five-spoke alloy wheel and gets red coloured brake callipers to add up to the sporty look.

Powering this sports car is a mid-engined 3800cc Euro-6 compliant mill which is mated to a six-speed automatic transmission. This mill churns out 320 horsepower and transmits all the power produced to all the four wheels of the car. DC TCA is a limited edition sports car and only 299 units will be produced. Each car will be personally signed by the man himself, Mr Dilip Chhabria, founder of DC Design.

The production of the TCA will commence from the month of October 2018. once launched it will be DC’s flagship model and we expect it to priced somewhere between 60-65 lakh. Do let us know what you feel about DC’s latest sports car in the comments section below.