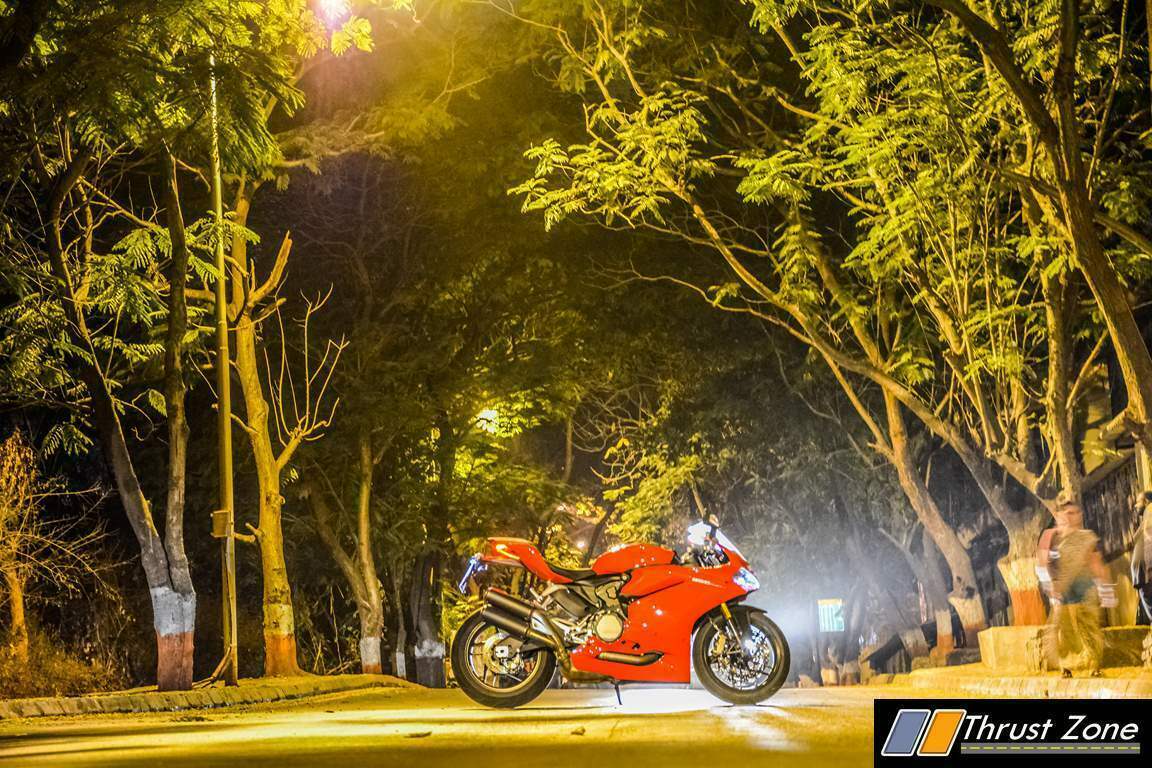 Ducati Panigale 959 has a docile engine, electronics that work with precision and the design that makes heads turns from kilometers away 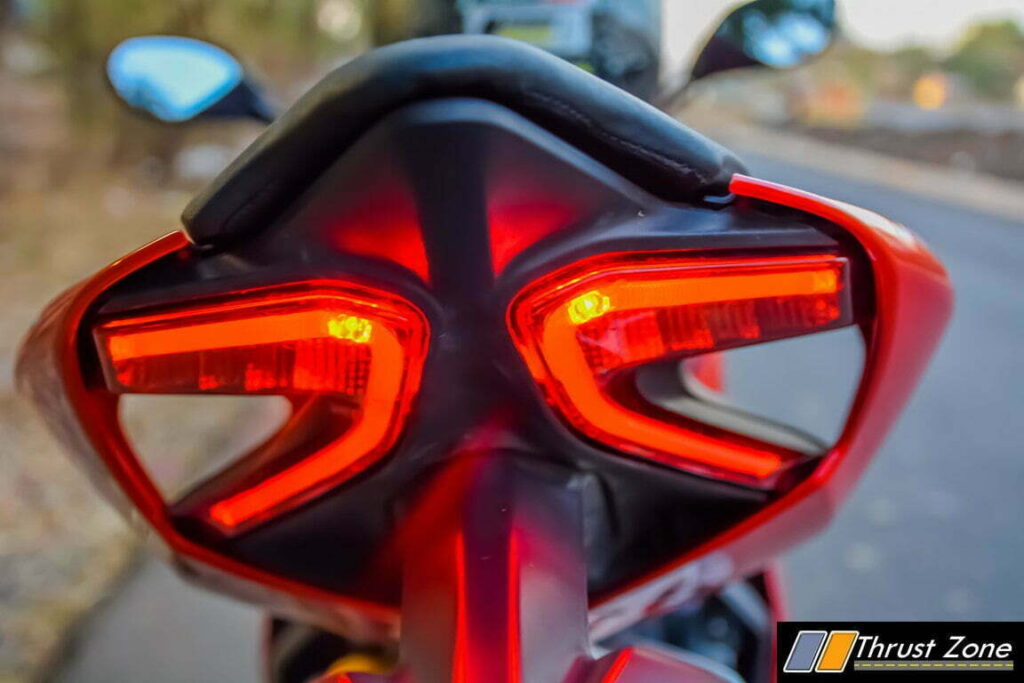 Ducati India is going as fast as its motorcycles in the country. The manufacturer recently said that it has been doing extremely well in the country. All of this is thanks to a large variety of bikes on offer. Ducati Scrambler and Monsters do their job of attracting new buyers. Adventure seekers are the one helping Ducati getting the sales and cash registers ringing. The Multistrada twins are here and as they are really good at what they are supposed to do (which is basically everything) thus customers are choosing them as well. However, you cannot ignore the rich heritage of the superbikes that the company has. Ducati is a superbike maker and everything else was, is and forever be after this fact. 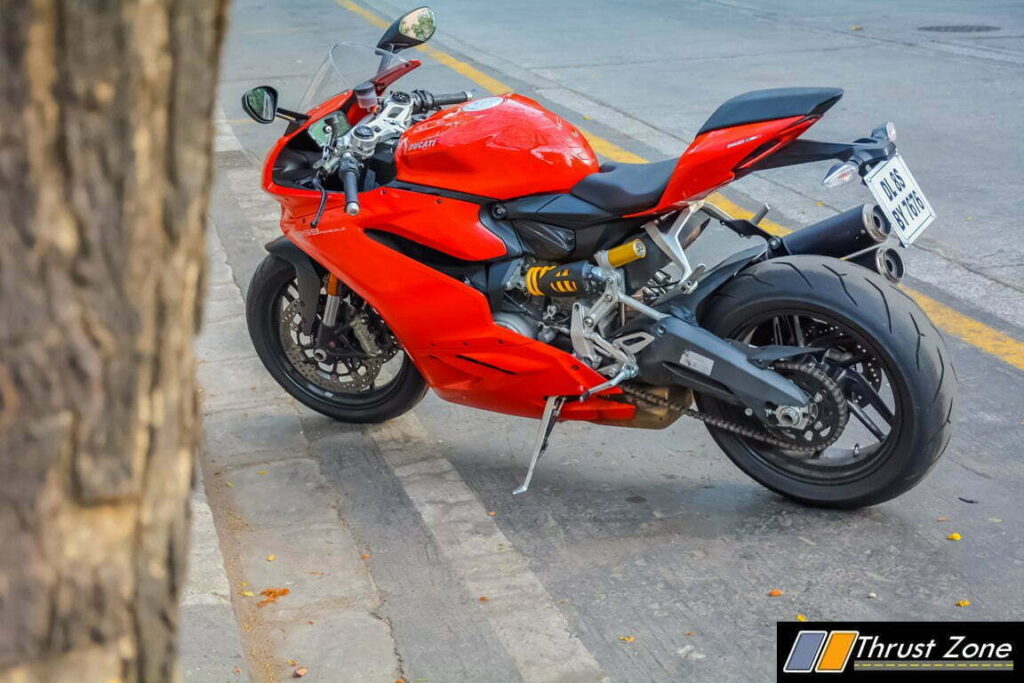 The racing pedigree on offer along with the road bike package for the baby Panigale is hard to ignore if you love sport riding and are a track junkie.  The Panigale 959 replaces the 899 and is said to be much better than proper liter class track monsters of not so distant past. In fact bike’s displacement and power output makes it significantly close to Japanese litre class bikes of recent past and which gets the Panigale 959 all the attention on paper and on road that it gets. However, does the Panigale 959 deserve it? We put it through a thorough road test to tell you how the 959 fares. 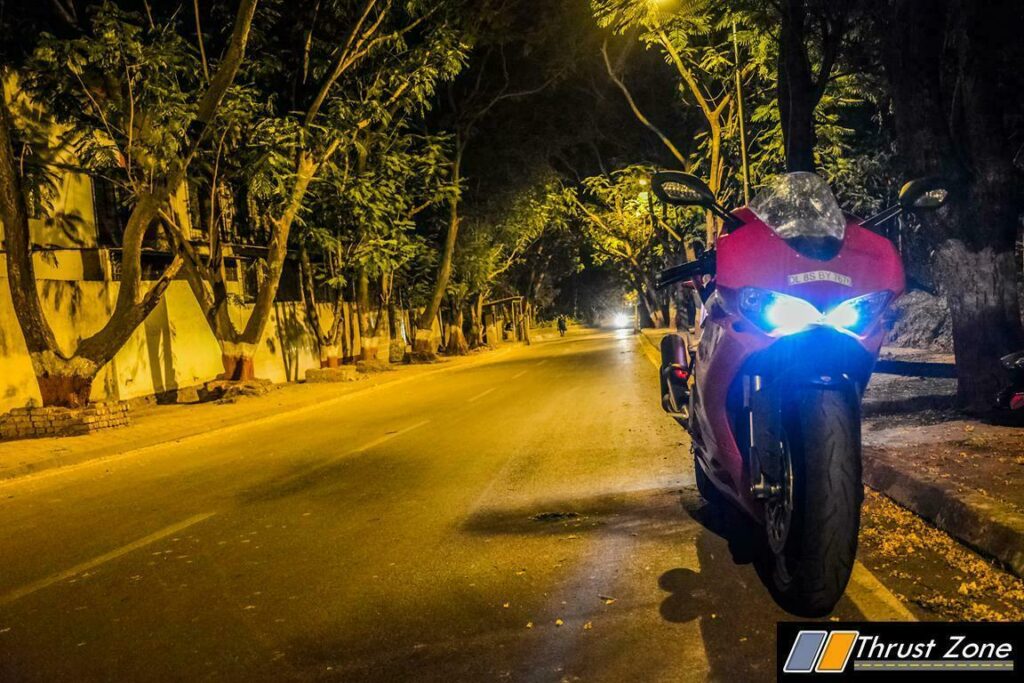 The design continues to be an approach which is timeless and aggressive at the same time. The way head and tail-lamps are done, they invoke passive aggressive character which suits the bike really well. The Panigale with its one large fairing piece on both end which starts from above and extends below with a partition is work of art. The curves and the edgyness on offer is just perfectly executed. The lower part has cuts which then move upwards give it a purposeful look and we are sure it aids in aero efficiency as well. 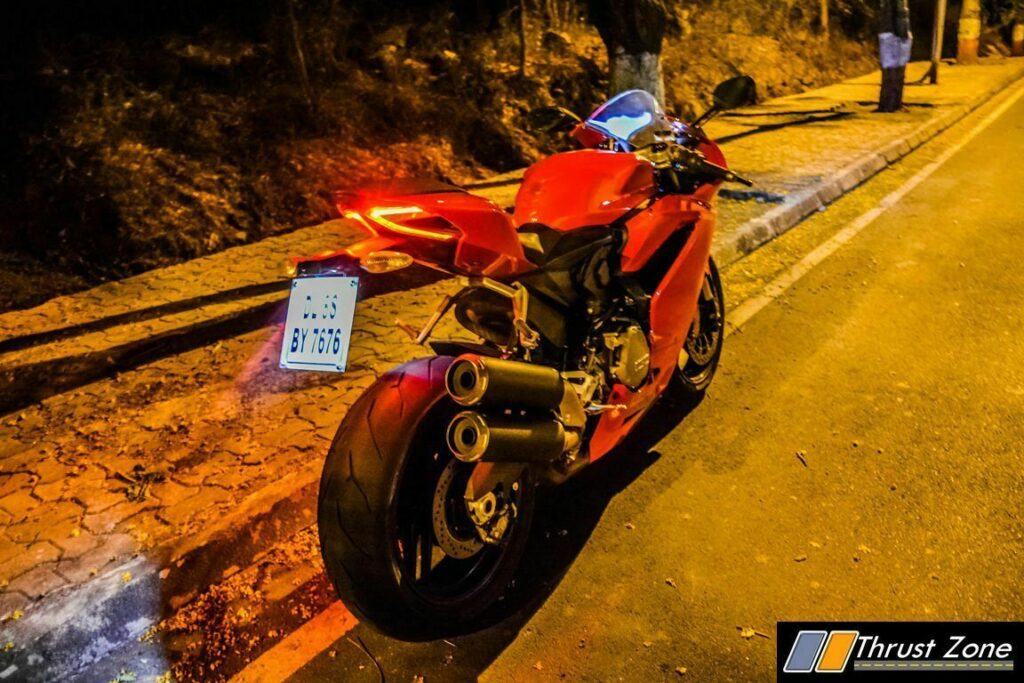 The tail-piece is one large unit which swoops up and houses both seats and is simply a work of art. The sinister tail-lamps make sure it adds 200% more flair to the package. The small fuel tank and stubby cockpit area makes the bike look uniform and dedicated from the aspect of the rider. We thought the exhaust will affect the design much, however, after spending some time we did find the shotgun inspired canisters not fitting well with Art inspired designed motorcycle. All of this makes the bike look aggressive, timeless and still has the relentless charm too woo its audience. 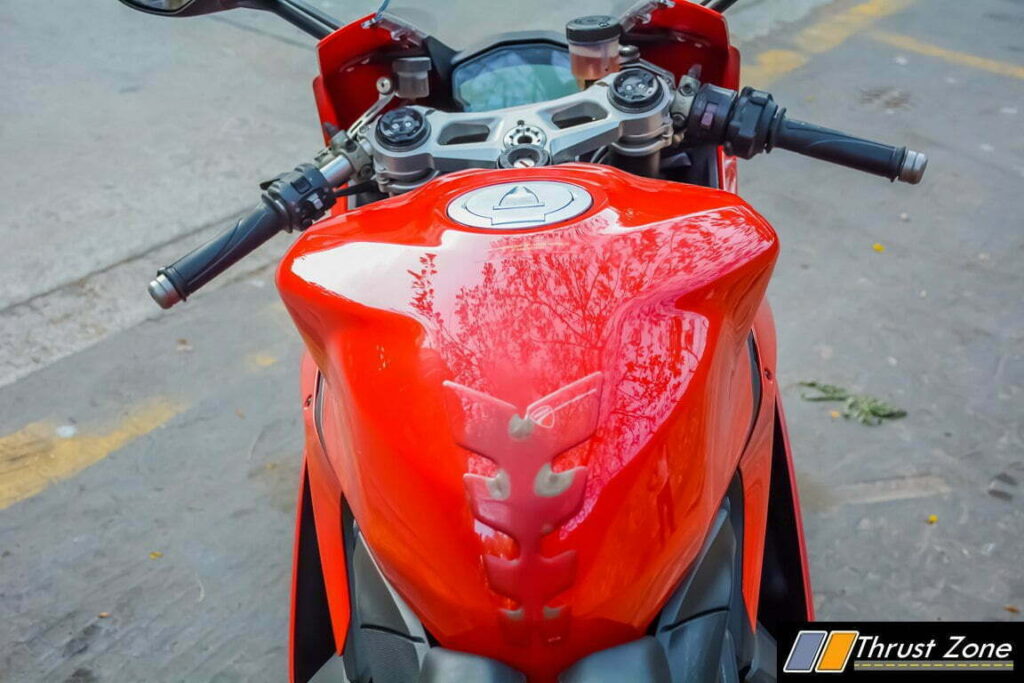 Ergonomics are near perfect when you consider this is a sport bike. It is almost always an achievable  dream to find a comfortable seat on a sport bike and the 959 has it. However, pillion seat is the complete opposite. There is a lot of legroom for tall riders and along with a low seat height of just 810 mm it is an ideal balance. Rear set pegs and mounted very high still allow to grab the tank, which is quite small and hence you keep on touching the engine head and this where we got burns on both sides of our thighs. The tunnel vision can be witnessed even if you are in traffic and target fixating is pretty obvious in most cases, in the beginning that is because of the vision is limited. Typical sportbike character. 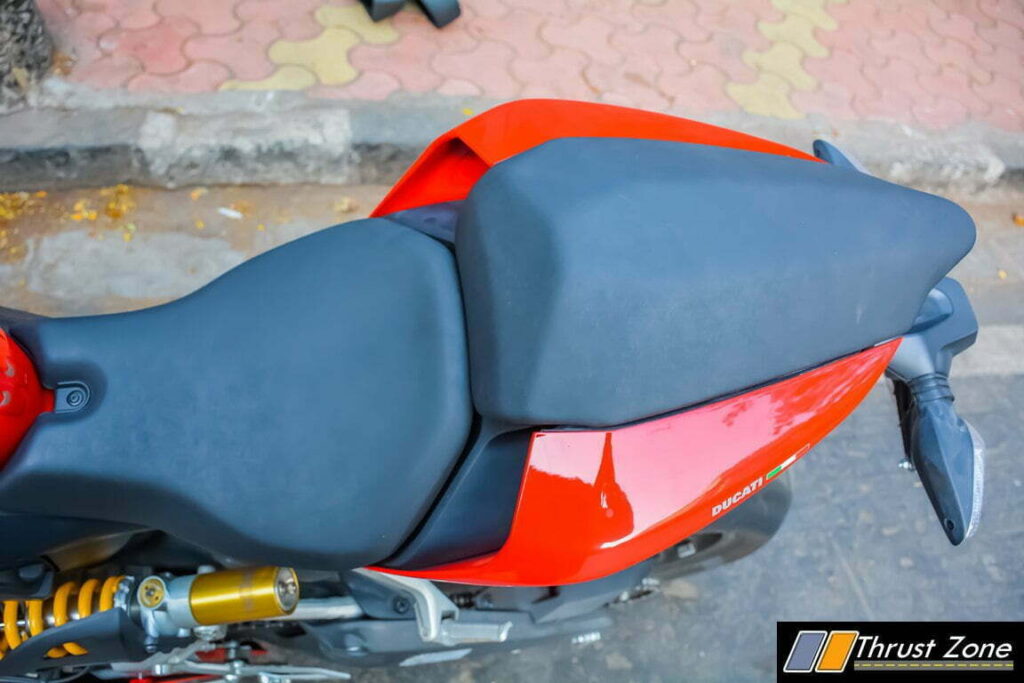 Why we are impressed with ergonomics is because the riding position is committed, as in how you sit on the bike. The clip-on bars are way to low for a sport bike and it feels downright race spec. Your hands are almost 90 degree straight as your grab the bars and it feels like you steering the earth along with the motorcycle. More on that later though. Mirrors are almost useless as they are small, do not fold and vision is quite limited. Overall, a bit of sacrifice but top marks for major areas where comfort and accessibility is provided to all type of riders. 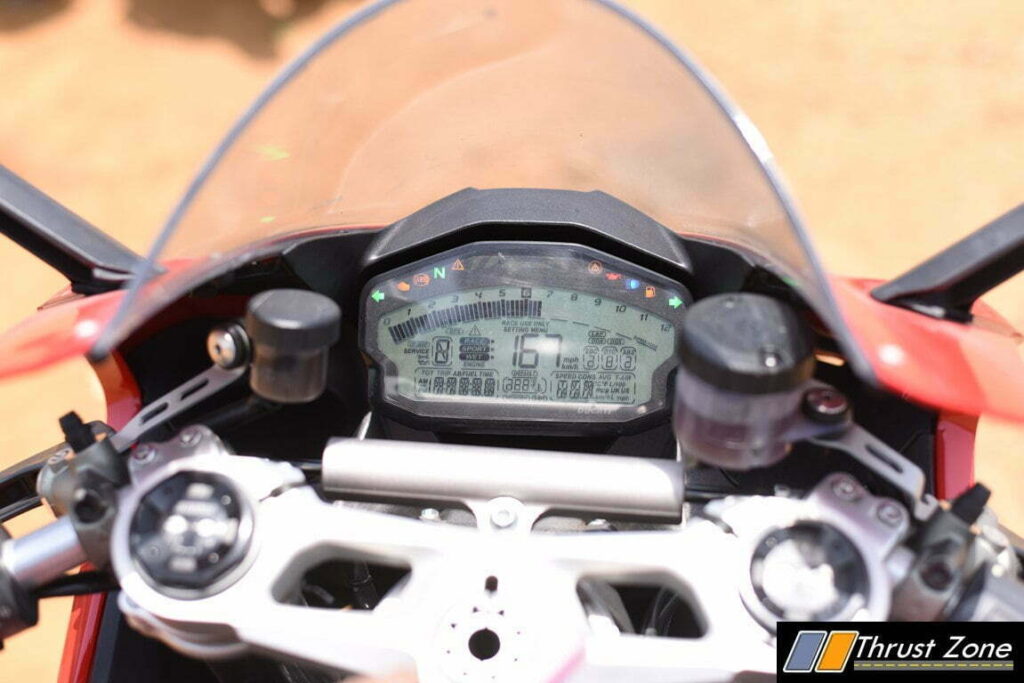 Cluster has all the tell-tale lights and the fuel-efficiency parameters you need on a daily basis. There is no fuel gauge on offer only has fuel warning light. The cluster comes with a lap time as well. The LCD units lets you access the three riding modes, a digital tachometer, speedometer and the usual two trip meters, odometer and outside and engine temperature. The right switch has the fighter jet inspired flip button which has a starter button and it does make feel great every time you start it. Left switch has the upper switch which controls right side of the small screen on the dash and lower button controls the left screen on the speedo. 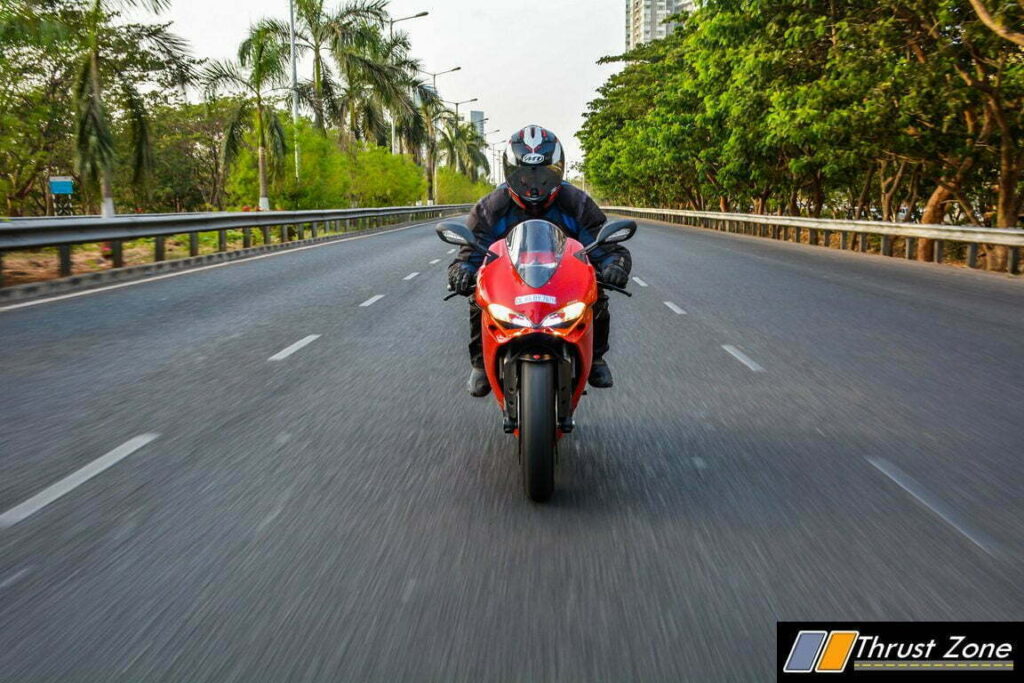 Let’s begin with the electronics. Three riding modes are available and they all are customizable. We found the best setting for city street and highway riding to be Sport. We saw the default option (there are three) which are traction control, ABS and EBC (Engine braking control) After getting EBC to 2 which means lowering it down, it made it rather easier to trundle around in the city at lower speeds as dive would be less at the front on the release of the throttle as it became less immediate. All of this can be adjusted on the fly ONLY if you close the throttle and not use the brakes at the same time. You touch the brakes and adjust riding modes, it won’t happen. 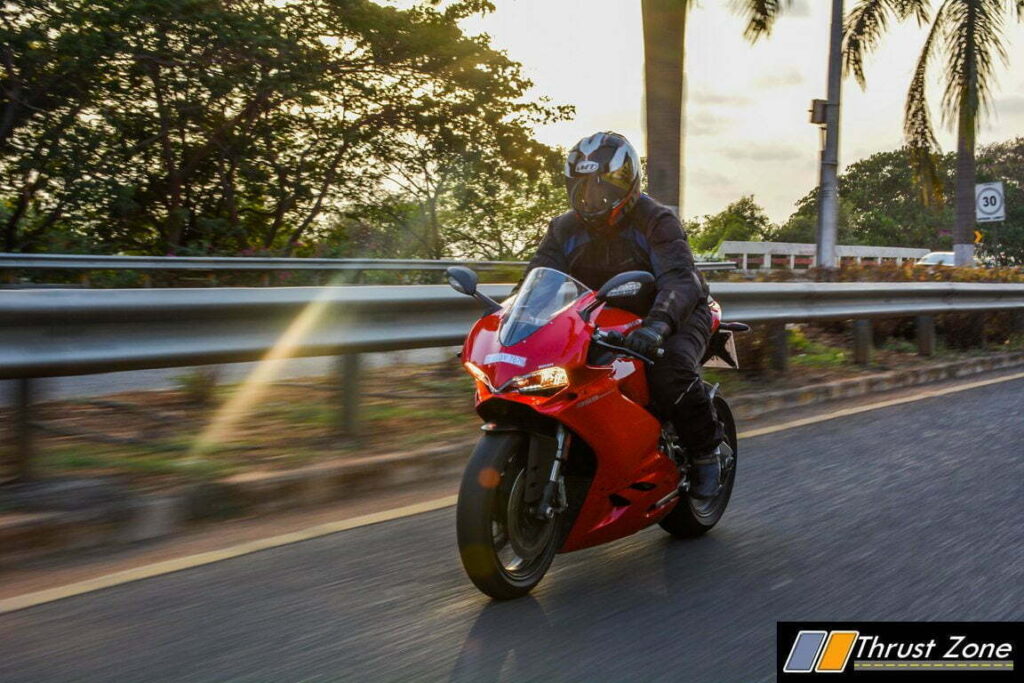 Ducati tells to keep it in Race or Sport mode at all time and even in the city because the WET limits the power and causes the engine to heat more. We did experience something similar. The Race mode is actually makes the bike more smoother and so does the throttle. However, it is still peaky to begin with it. It is best to use sport mode which is less peaky but not very manageable like WET mode. Do the adjustments mentioned above and you can live it with in the beginning. As time passes by, you can find our own settings. 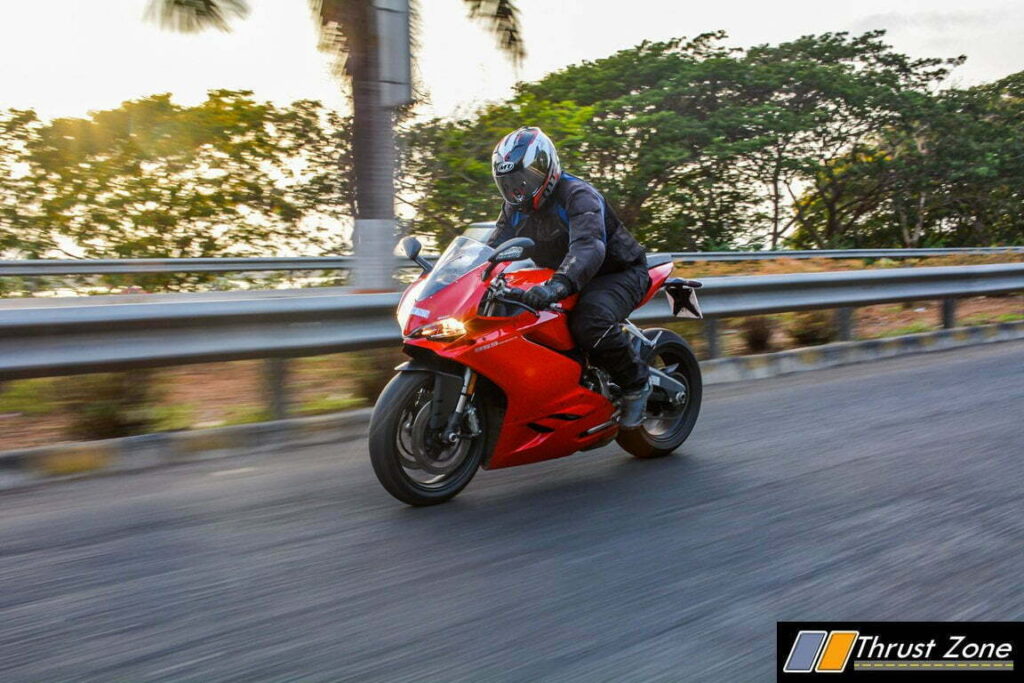 The engine, it is the Superquadro Desmodromic, liquid cooled motor which makes 157 PS of power and 107 Nm of torque. The engine begins with a typical desmodromic clatter associated with Ducati’s as there are lobes controlling the valves and no springs exists to do the same like conventional engines. However, as you find the low-end slightly jerky as it also demands frequent gearshifts. A generic example of the same can be seen in KTM motorcycles as well. Under 5000 RPM, the engine is sane enough and delivers decent grunt, post 5000 RPM, the engine rushes to the redline with all the intake howl, thrust and drama is associated with superbikes. We got 15.5 km/l in our overall testing which includes 50% highway and city. 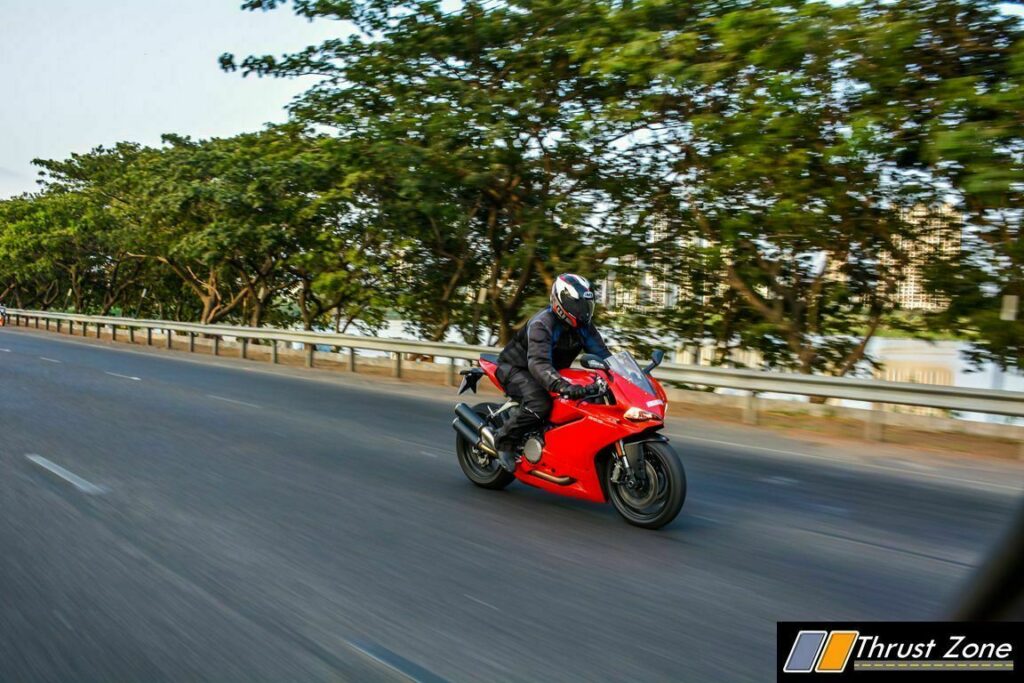 However, it slices the air and sticks to the ground at speeds like 170 km/hr – 220 km/hr like walking to fridge to get our midnight pastry, its that easy and poised. Exhaust noise at that point is mechanical and full of bass, but it isn’t exactly extremely loud of the past Ducati’s. This clearly has to do iceberg friendly Euro 4 emission and noise levels. You can find noise insulation inside the fairing panels to make sure it meets all demands. NVH level are good enough and there is just mild amount of vibration felt on the pegs. Gearbox is smooth, clutch is light and Ducati quick shifter does it job on upshifts and is not available on downshifts. The 959’s highlight is how exits corner, thanks to clever gearing which is a right mix of narrow power band and taller gearing, you always have power to charge out of a corner. 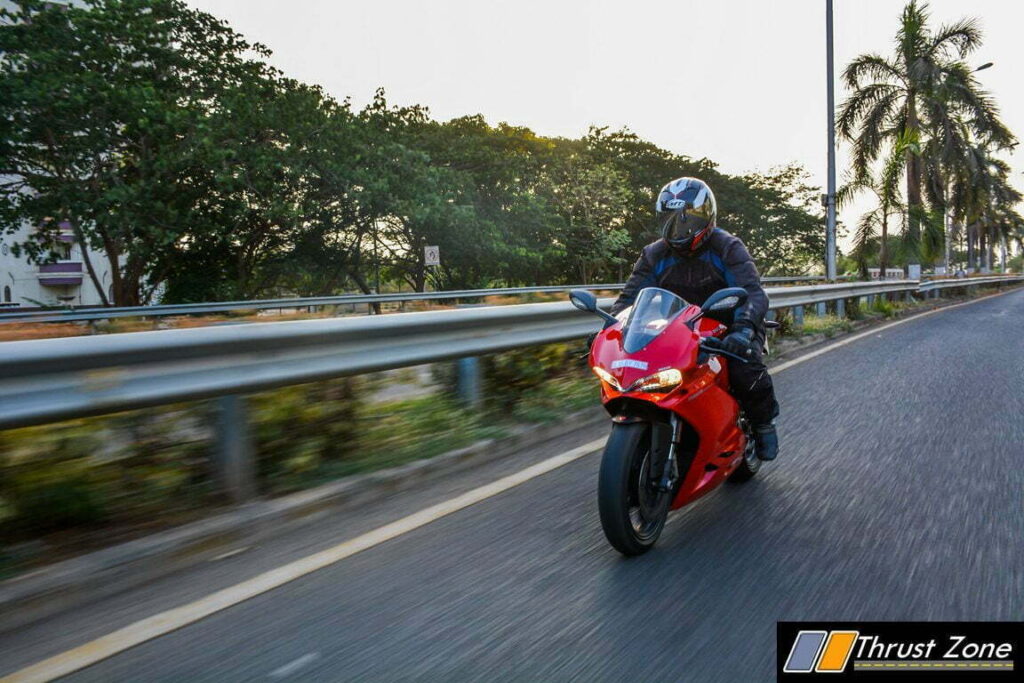 Armed with a monocoque chassis, adjustable suspension on both ends which include Showa Forks at the front and Ohlins rear shock at the rear and M4 monobloc calipers at the front makes for interesting spec on paper. On our Indian roads, the suspension setup on our bike was on the softer side and before we stiffened it up a bit, the motorcycle was riding stiff but compliant enough for our roads. 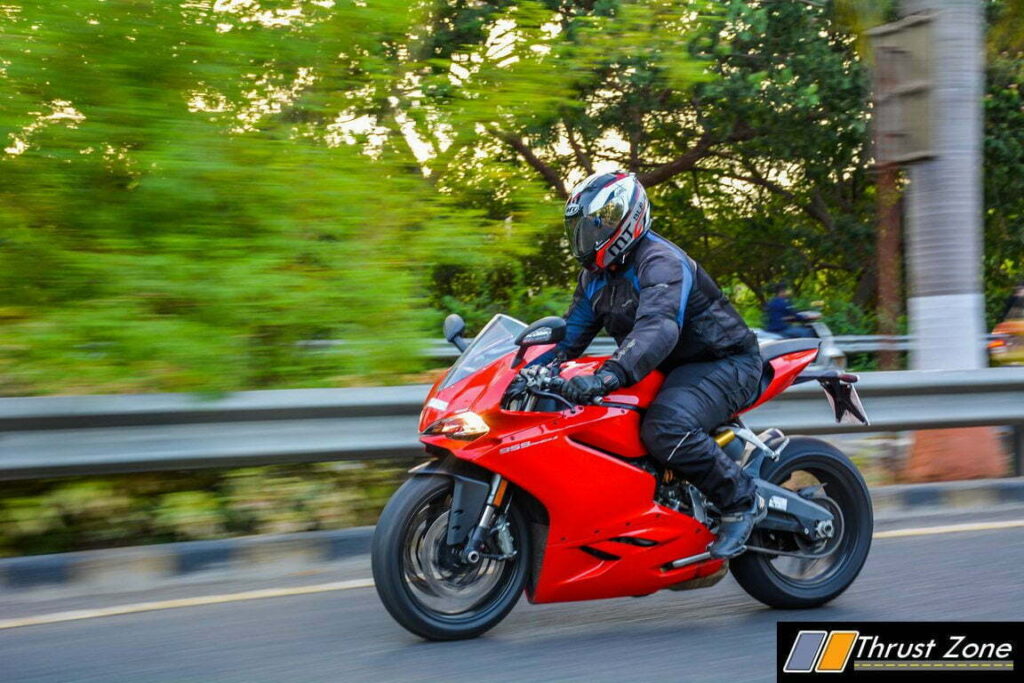 Stiffening saw the motorcycle resulting in harsher ride quality and hence we found an ideal setup once again for our roads. Quick tip on adjusting, the rear suspension can be adjusted by just using the key rather than getting a screwdriver. Chassis performance is spectacular, the best possible tuning for dampers and spring also means that the agility on offer was excellent and the motorcycle weighing exactly 200 kgs fully fueled was nimble enough to weave through slow and dense traffic. 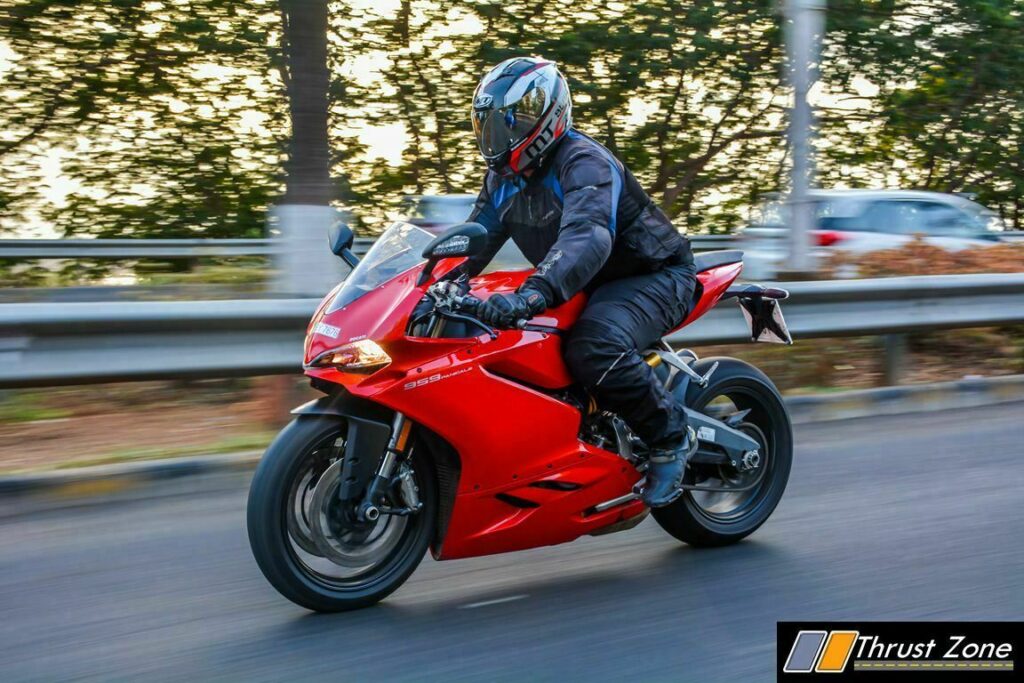 Short wheelbase, a fantastic front geometry and intense feedback thanks to massively dedicated riding position which makes you grab the bars with almost 90 degree angle means you are steering the earth and the motorcycle at the same time and that means the feedback level is incredible, a word still underrated to describe the front-end. Counter steer, dip into corner, grin and exit out with the help of an engine which always has power is extremely rewarding every single time you do it. In terms of braking, the initial bite is superb and post that there is a lot of progressive power at the front. 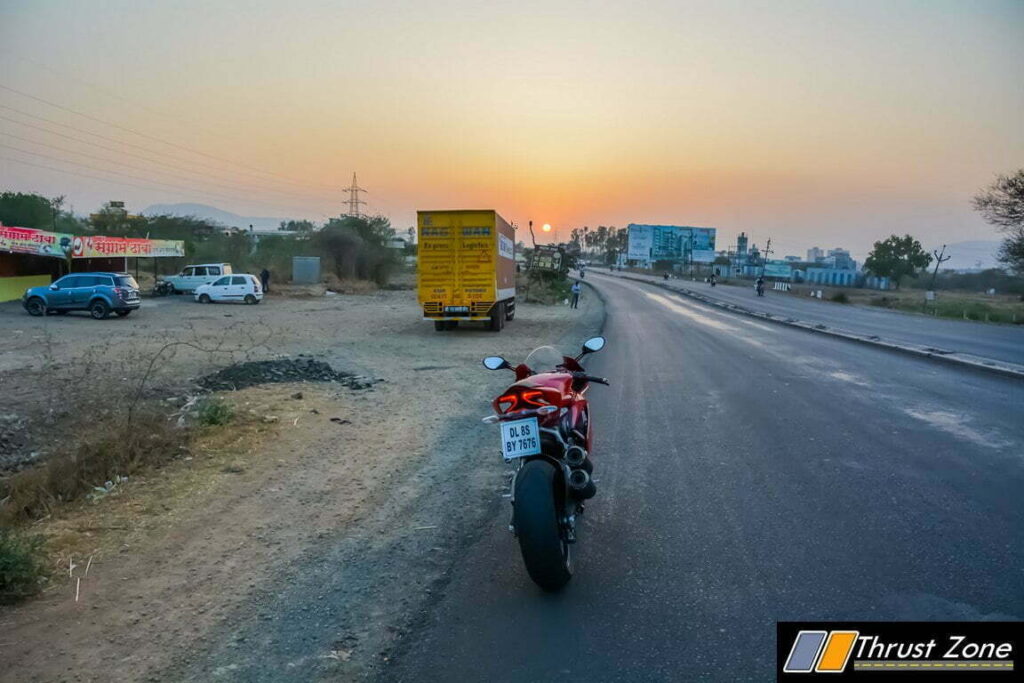 959 has to be the most docile, rewarding and one of the finest motorcycle to come out of Bologna gates. The Panigale’s approachable aspect in riding dynamics, price along with racing heritage makes it impossible to resist if you are track junkie or a hardcore sport biking enthusiast. Litre class performance from other bike available in the upper middle weight segment with a price tag to match is a deal you cannot ignore. 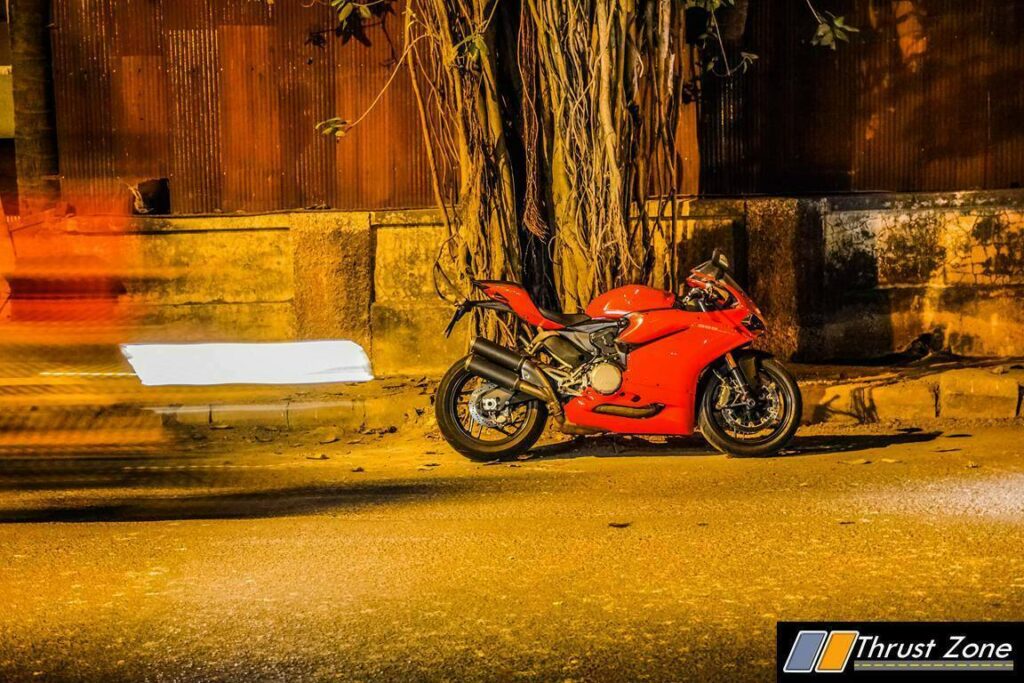 Ducati’s ever increasing dealership and service network promises to help you get through smoothly to long lasting ownership experience. Yes, it is a bit to focused for daily riding and that is where the Strada’s and the Monsters come in. However, sport biking craze continues worldwide and India is no exception to it. And yes, most importantly, if you want to get that side stand down, use the toe and not the heel, it actually works, thank us later. 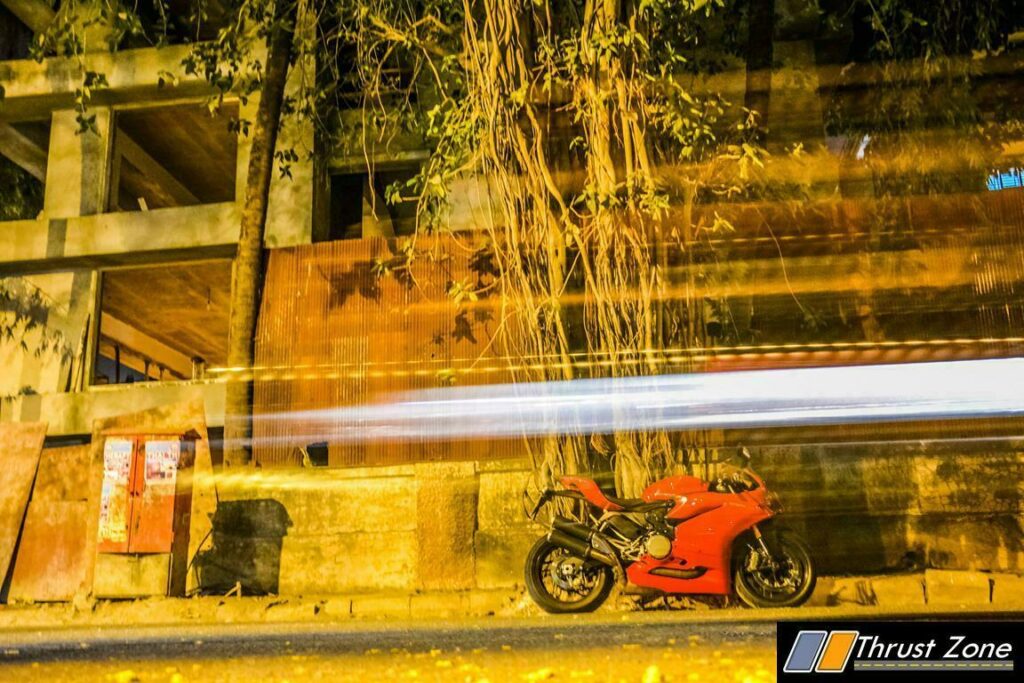