Ducati Streetfighter V4 Lamborghini – Do You Really Want It!? 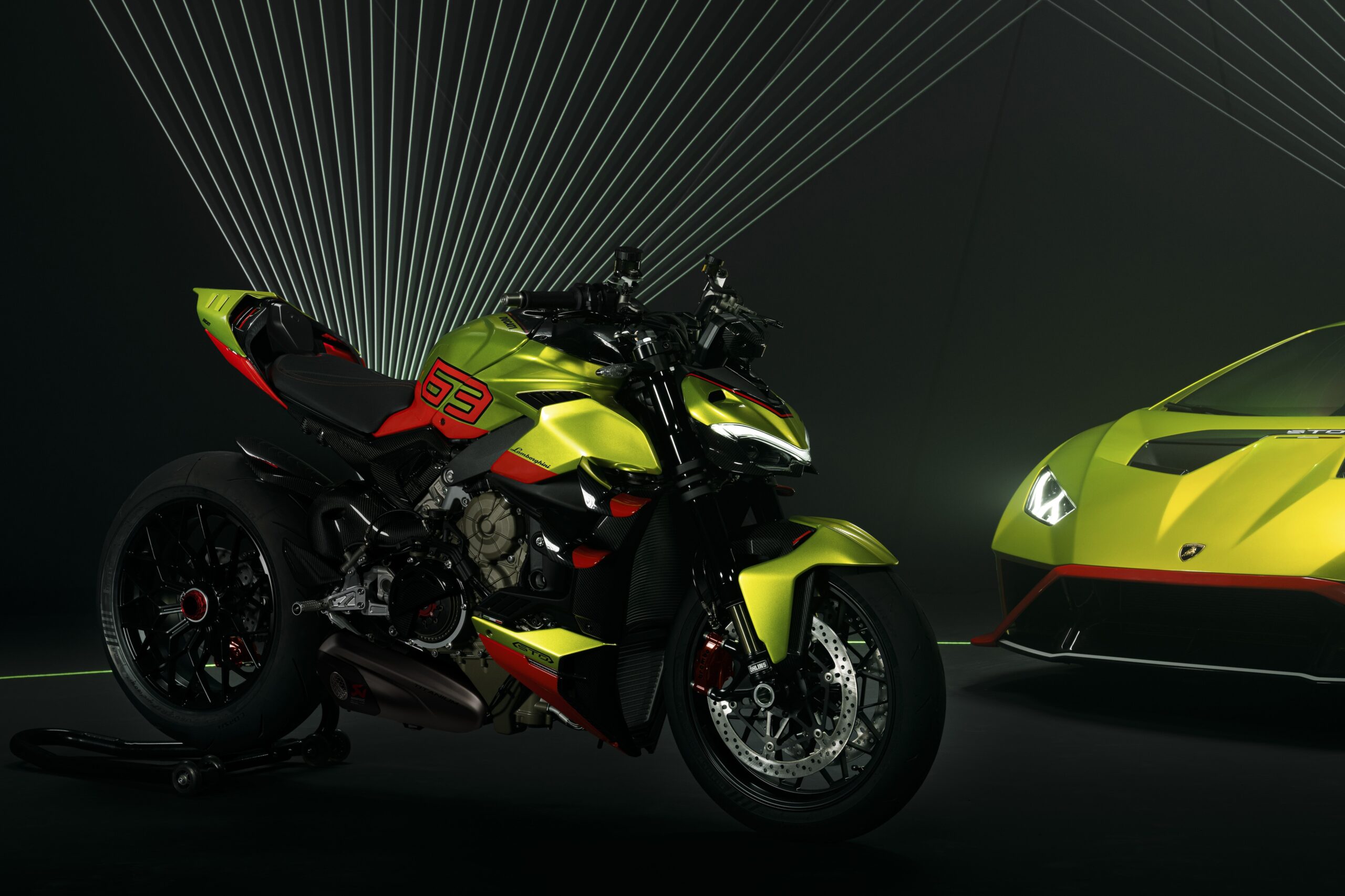 Ducati Streetfighter V4 Lamborghini has been unveiled to the public (here is the link to the official presentation). The most attractive and exclusive Ducati Streetfighter ever produced is a motorcycle that perfectly embodies the values ​​of extreme performance, sportiness and exclusivity shared by Ducati and Lamborghini, two brands of excellence that have contributed to writing the history of Motor Valley and that renew and enhance their collaboration with this special project. The final result is a magical combination of technology, performance and beauty, capable of making fans dream from the very first glance.

By applying the technical base of the Panigale V4 S ’23 and integrating elements that characterize the DNA of Lamborghini, Ducati has created a hyper-exclusive model. The bike will be produced in a numbered series limited to 630+63 units and it reworks the concepts that gave life to the Lamborghini Huracán STO.

The Huracán STO is the highest-performing model ever made of the Huracán family, a supersports car created with the sole purpose of offering all the sensations of sports driving and the technology of a real racing car in a model approved for road use. An approach with light materials and functional design come together to express outright performance.

Lamborghini style features have been transferred to the Ducati Streetfighter V4 Lamborghini, starting with the forged wheels made specifically for this bike with the design of the Huracán STO. The rear rim is enriched by the presence of a single titanium locking nut, also with a Lamborghini design.

The Centro Stile Ducati has redesigned the superstructures of this special bike drawing strong inspiration from the Huracán STO: on the front mudguard, tank cover, belly pan and tail, all new components, grille extractors, vents and air intakes have been obtained explicitly recalling those present on the car. Specifically, the mudguard is inspired by the integrated air vents in the Lamborghini “cofango”, the extractors obtained on the belly pan follow the cooling intakes of the rear brakes of the Huracán STO, those present on the side covers of the tank recall the vents on the front fenders of the car while the extractors on the single-seater tail refer to those on the bonnet of the Lamborghini.

A further testimony of the obsessive attention to detail that characterizes this bike is the fact that all the carbon components (including the aforementioned front mudguard, belly pan, radiator cover, wings, tank cover and tail) are made using the same texture visible on the supersports cars of the Sant’Agata Bolognese company. The saddle of the motorcycle is also inspired by the finish of the seats of the Huracán STO thanks to the presence of highlights in the same colour as the superstructures.

The Ducati Streetfighter V4 Lamborghini is enhanced by further precious components: adjustable rider foot pegs and lightened brake and clutch levers in billet aluminium (in collaboration with Rizoma), and the heel guards, the saddle pad, dashboard cover and ignition switch cover as well as the sprocket protection made of the special carbon fibre used for the bodywork components. The same carbon fibre is used in parts assigned to heat protection in the covers of the rear head and manifolds of the relative cylinder bank, but also in the headlight support, in the rear mudguard and in the rear subframe guards.The side view of the Ducati Streetfighter V4 Lamborghini is finally also enhanced by the Akrapovič exhaust silencer in titanium with carbon fibre end cap. 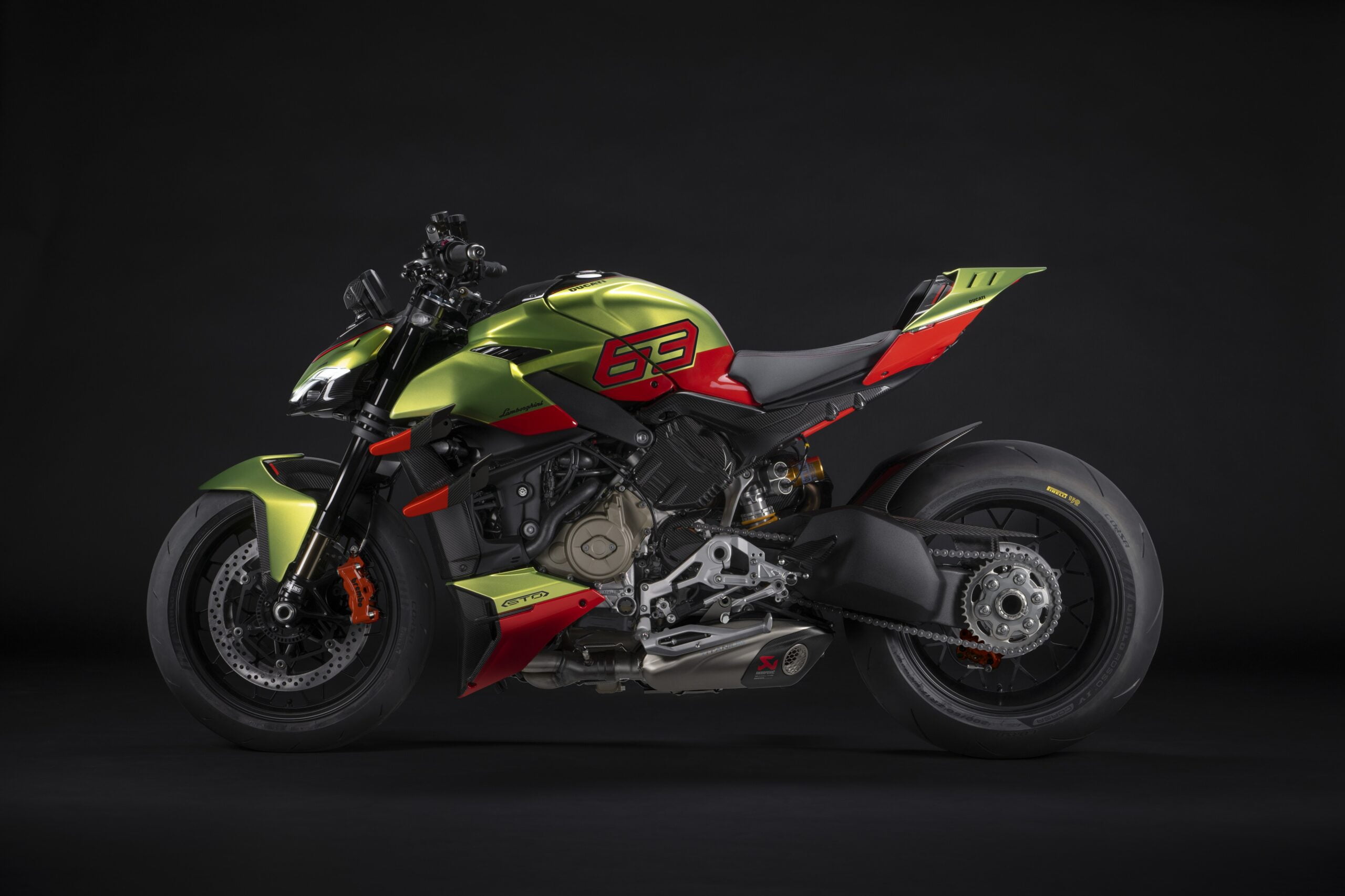 The name of the model and the serial number of the bike are shown on a metal plate inserted in the central tank cover. The number is also machined from solid on an aluminium insert of the ignition key and appears on the TFT dashboard during ignition, together with a celebratory animation showing the Ducati and Lamborghini badges and the silhouette of the model

630 examples of the Ducati Streetfighter Lamborghini will be made in Verde Citrea/Arancio Dac, one of the specific colour combinations of the Huracán STO. Brembo wings and brake calipers are also coloured in Arancio Dac, the latter with a contrasting black logo. The Öhlins stays and fork legs are black.

In addition to the 630 Verde Citrea/Arancio Dac units, Ducati is offering an even more exclusive series of 63 bikes, called Speciale Clienti , which are only available to 63 Lamborghini customers. These customers, through a direct collaboration with the Centro Stile Ducati, will be able to configure their Ducati Streetfighter V4 Lamborghini Speciale Clienti with body colours and wheels exactly like their Lamborghini. It will also be possible for them to choose the colours of the brake calipers among those included in the palette (Yellow, Red, Black and California Orange, in addition to the standard colour) and the details of the saddle among the four available versions.

The heart of the Ducati Streetfighter V4 Lamborghini is the 1,103 cc Desmosedici Stradale engine with a power output of 208 hp (Euro5 EU version), characterized by a counter-rotating shaft, desmodromic distribution with four valves per cylinder and Twin Pulse firing order derived from MotoGP. On the Ducati Streetfighter V4 Lamborghini the engine is characterized by having a dry clutch, as on the Ducati MotoGP and Superbike.

The aluminium Front Frame uses the engine as a stressed element. The suspensions are Öhlins Smart EC 2.0 semi-active units, while the Brembo braking system relies on Stylema calipers and 330 mm discs. The aerodynamic package, based on carbon biplane wings integrated into the tank side covers, stabilizes the bike at high speeds without compromising agility and handling. The kerb weight is 197.5 kg.

The Ducati Streetfighter V4 Lamborghini is supplied with a series of accessories that increase its appeal and ease of set-up for track use. They start with the open carbon fibre cover for the dry clutch and continue with the caps for the removal of the number plate and rear-view mirrors, a racing fuel cap and a motorcycle cover in the same colour as the bodywork. The equipment is completed by an aluminium certificate of authenticity, on which the frame and engine numbers are shown, to guarantee the originality of the bike and to further underline its exclusivity.

This unique collaboration is reinforced by the possibility, reserved for Ducati Streetfighter V4 Lamborghini owners, to complete the look with a limited edition helmet, jacket and leathers, featuring a colour scheme that echoes that of the motorcycle.

Furthermore, for purchasers of the special customer version, the leathers can also be customized in the colours used for the configuration, limited to the choice offered by the Dainese palette.

The Ducati Streetfighter V4 Lamborghini was unveiled on the occasion of the San Marino and Rimini Riviera Grand Prix at the Marco Simoncelli World Circuit. The collaboration between Ducati and Lamborghini, which had already given life in 2021 to the Siàn-inspired Diavel 1260 Lamborghini – so successful that it sold out in a few days – will also continue on the MotoGP circuits. In fact, starting from the San Marino and Rimini Riviera Grand Prix, the shield of the Sant’Agata Bolognese company also appears on the Desmosedici of the Ducati Lenovo Team.