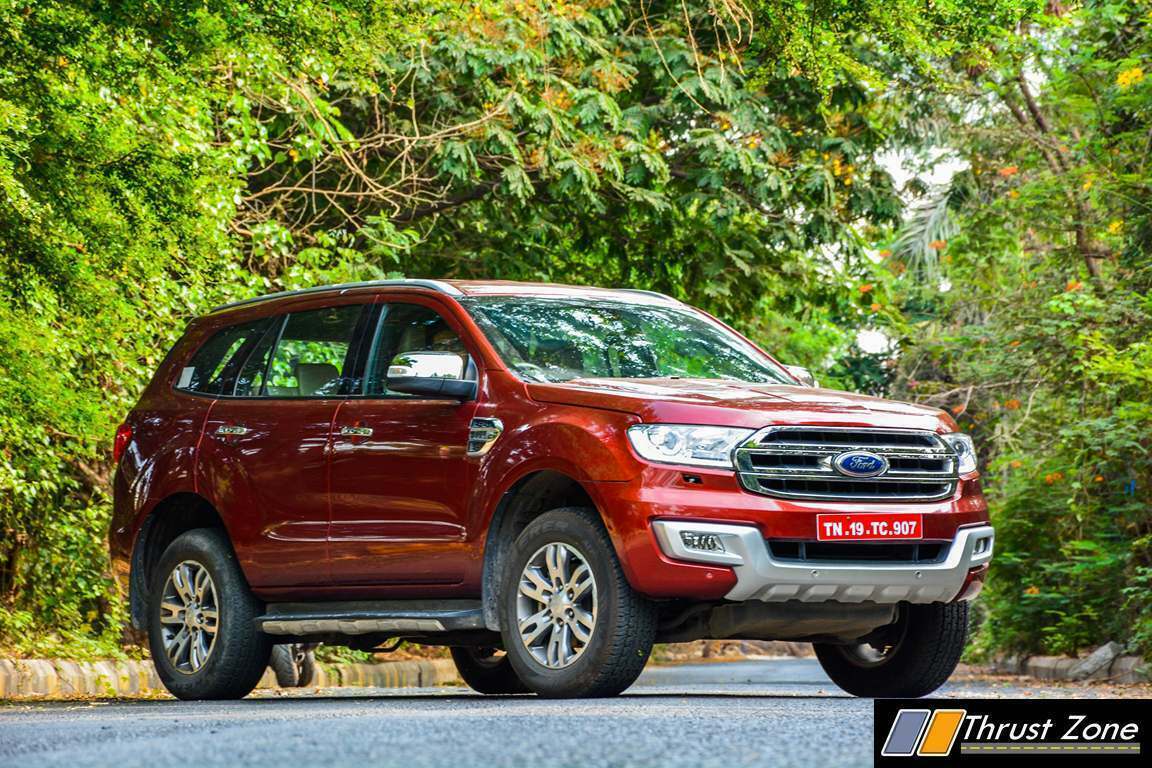 Ford Endeavour with the 2.2 litre engine makes for fantastic entry point into the SUV world as it packs dynamics, features and a premium quotient

Let’s admit the fact that the SUV market has been growing strong and hard over the past decade. We have seen all kinds of SUV’s. Right from Rs. 50 Lakh SUV to a 10 Lakh SUV and even a Rs. 7 Lakh SUV arrive and win volumes as well. In every dimension, segment and price tag there is an SUV. The Indian market though saw two types of the Rs. 20 lakh SUV, which is now a 30 Lakh SUV segment thanks to intense amount inflation and the 20 Lakh SUV segment still exist with a lower spec offered. 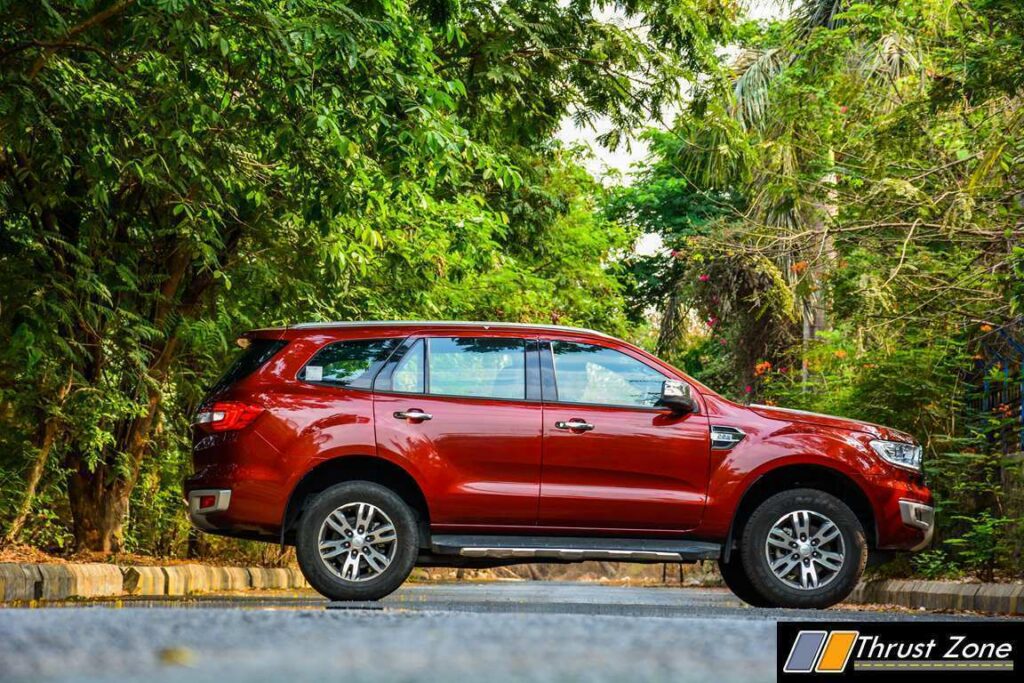 The war has always been between two giants in two categories. Safari vs Scorpio and then there was the Fortuner and Endevaour. Ford almost gave up and did not update its SUV, while Toyota banked on its brand and gave us the Fortuner which was quite modern for its time. Endevaour was left moslty unattended until 2015 by Ford and then the story of the new generation Endeavour started getting momentum and it arrived absolutely right on time, just before new Fortuner came. We were eagerly waiting to get our hands on it and now we have spend a good amount of time driving it. Our first impressions? Let’s find out! 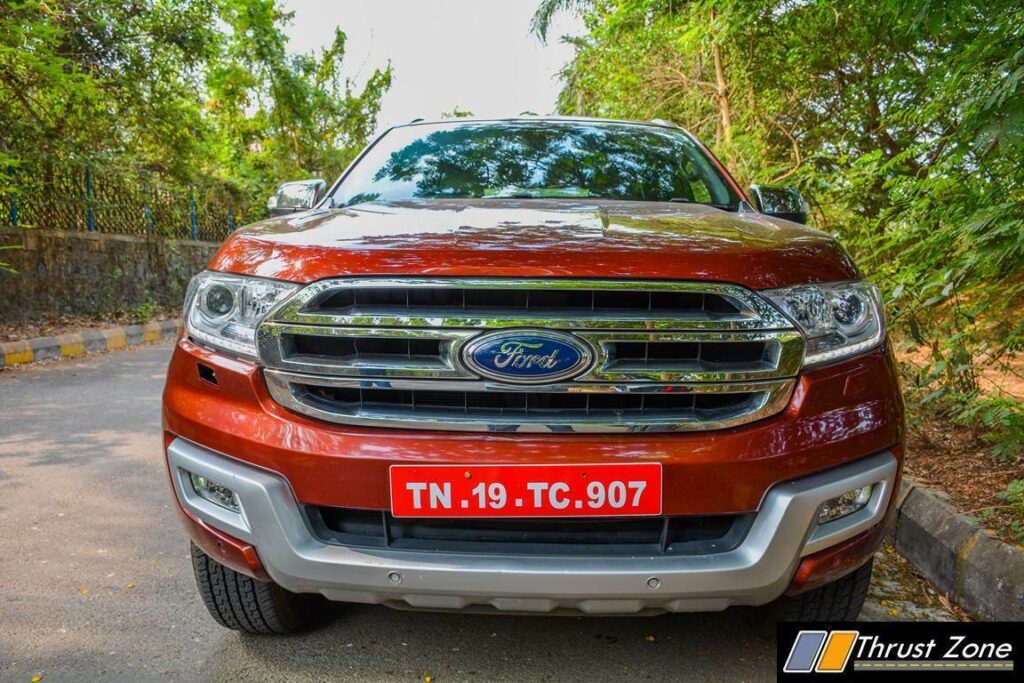 When it comes to the design, this Ford is all set to be a future classic SUV of its time. The clean lines, the muscular look that comes from large doors and windows, the subtle drop of the c-pillar kink is just very pleasing and invokes elegance and brutal appeal at the same time. The way the roof line drops also hints a very tiny bit of the coupe like design which has attention to detail done right! 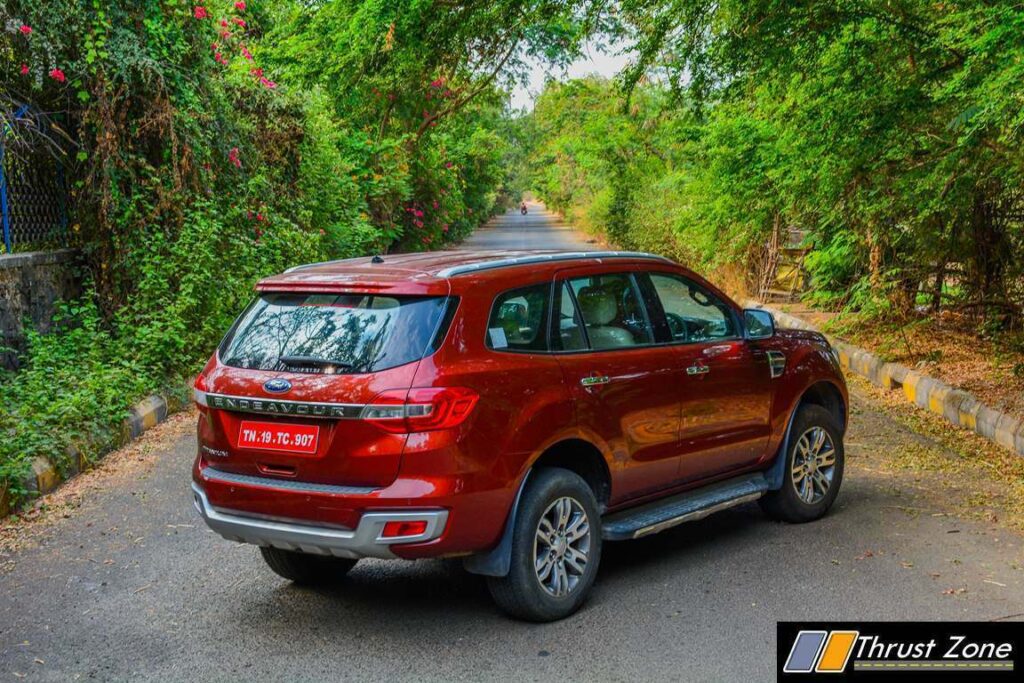 The front is fairly butch, yet clean and not busy, with a large front chrome grille, a large Blue Oval badge adoring the part proudly and a huge bumper with skid plates. The chunky wrap around head and tail-lamps are well done and have the LED’s to grab attention when the light gets low. The side profile with scissor inspired spoke wheels of the alloys look great on those large wheel wells. The rear is yet again quite intimidating to look at with a lot of chrome, metal and glass used in the right proportion. Fit-finish is top notch and the build quality, the solid doors are proper Ford indeed. Overall, we are quite impressed with the SUV when it comes to every design element. 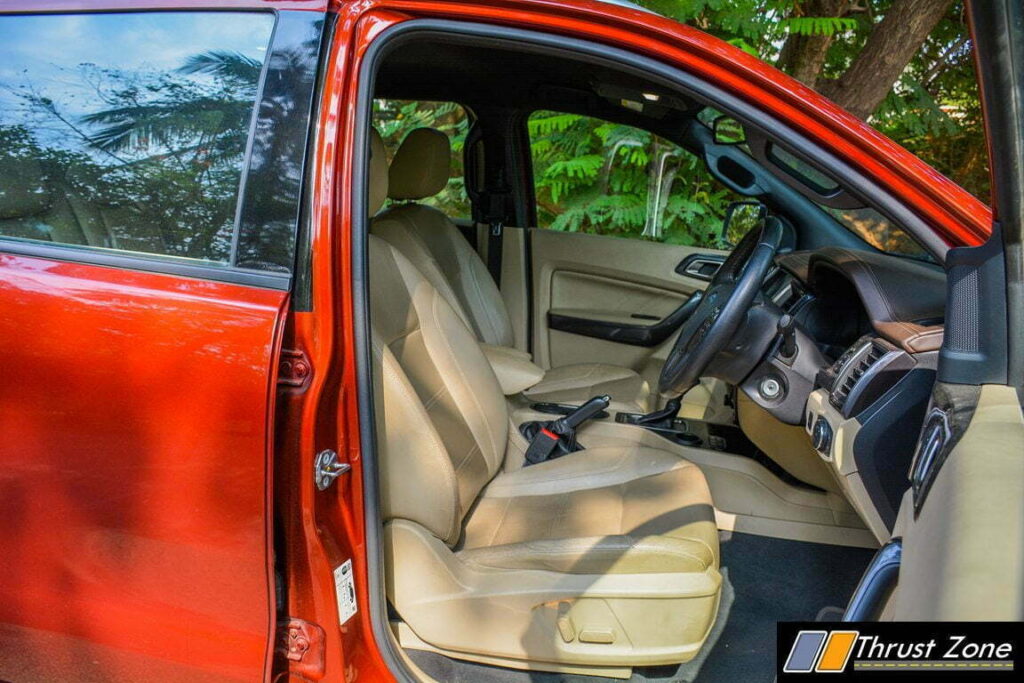 Interior is where the Endevaour shines yet again. The high quality materials, the leather cladded upper dashboard, the large touch screen has everything you need. The subtle use of chrome, piano black finish, ups the premium experience. There are no button, secondary screen or anything to play with it. The A/C and volume controls are there, but they can also be adjusted from the steering as wheel as the screen. There are plenty of storage spaces in the cabin, which places a vital part in making the SUV a practical place to be in. We like a particular feature which is the door lock and unlock button which is usually just on the driver door is found on all doors. 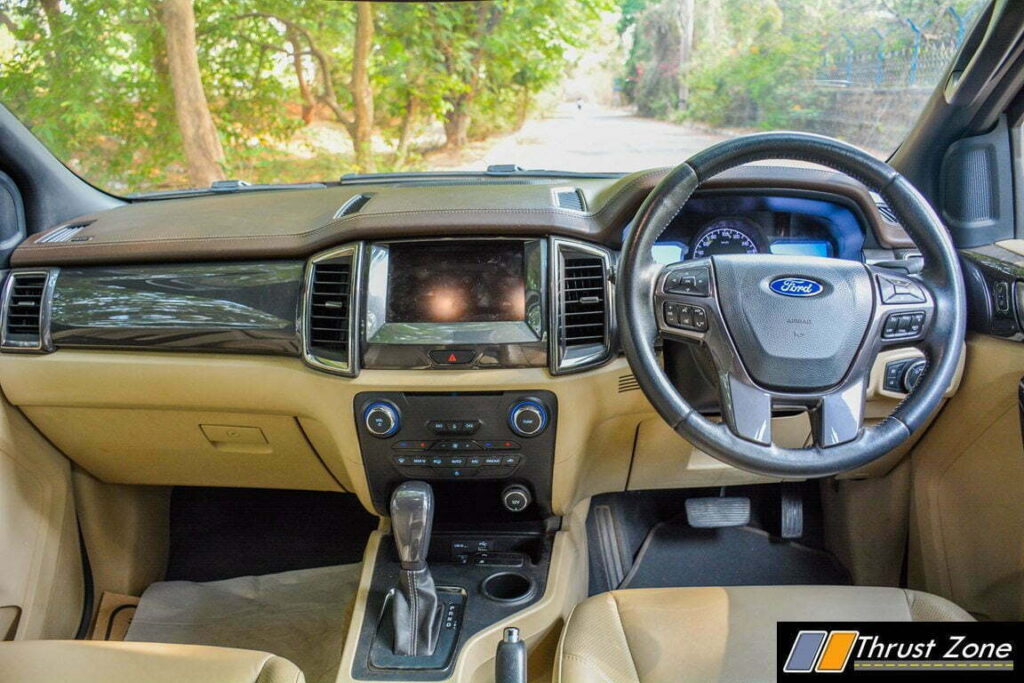 The steering has the largest amount of buttons on any steering we have seen till date. There are four navigation buttons on both sides of the steering and there are the usual buttons for volume, phone, cruise and voice control. Those navigation buttons let you decide what you want to see on the screen besides the speedo. Left side offers which menu to choose from and the right shows host of information about speed, fuel economy parameters, tachometer, trip meters, date clock and other essential MID functions. 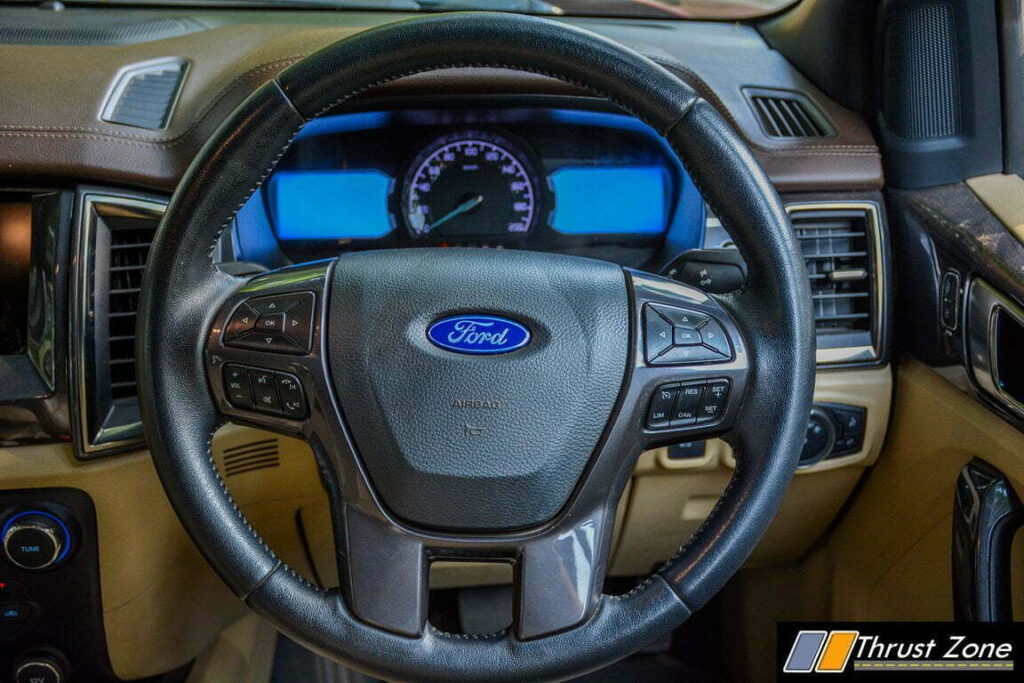 Feature list is quite extensive, we had the 2.2 litre which excludes top of the line features, but nevertheless, it is loaded as well. There are all the connectivity options you require in today’s age, there is fantastic 10 speaker audio system, a touch screen with SYNC 3 which reads your messages for you and displays new one like notifications. 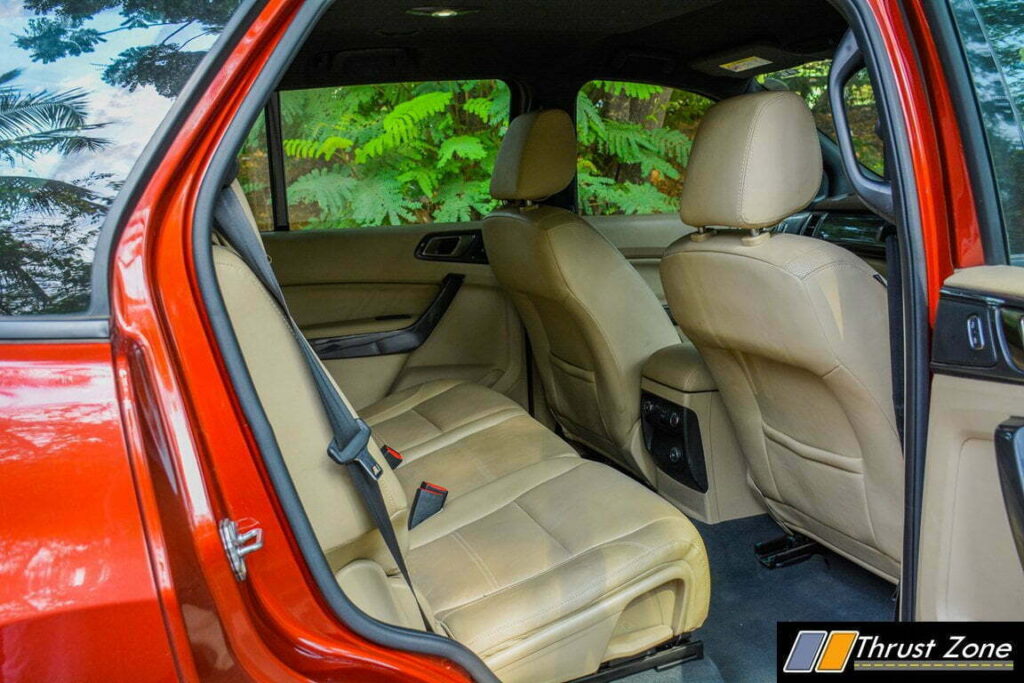 The SUV also comes with dual zone climate control, which worked very well. Leather seats, driver power seats, automatic headlamps and wipers, power tail-gate, tyre pressure sensor, xenon headlamps with LED DRL, headlamp washers, all four power windows with anti-pinch along with auto up and down, keyless entry, front and rear parking sensors, fully electric ORVM’s, a battery saver and parking camera. When it comes to safety, Ford is offering everything on every variant. Things such as 7 airbags, ABS and EBD along with traction control, ESP and emergency assistance are standard. 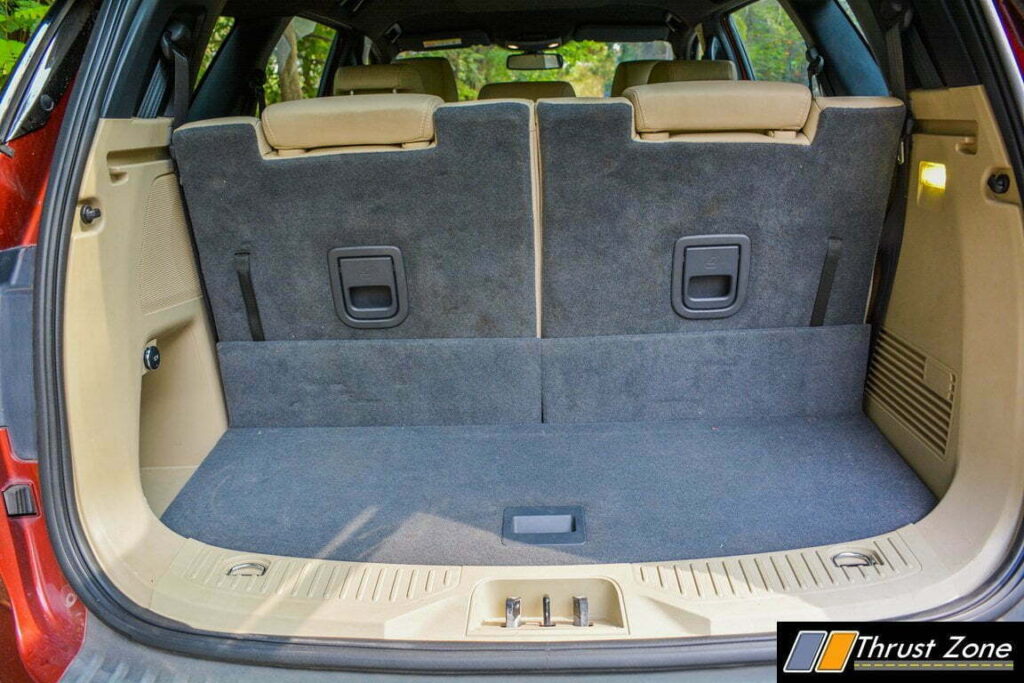 When it comes to space, the SUV does offer decent amount of head, shoulder and legroom. However, it isn’t class leading, but not less or a deal breaker in anyway. Getting into the third row is a bit difficult but it has a decent amount of space in it for adults and roomy enough for kids. 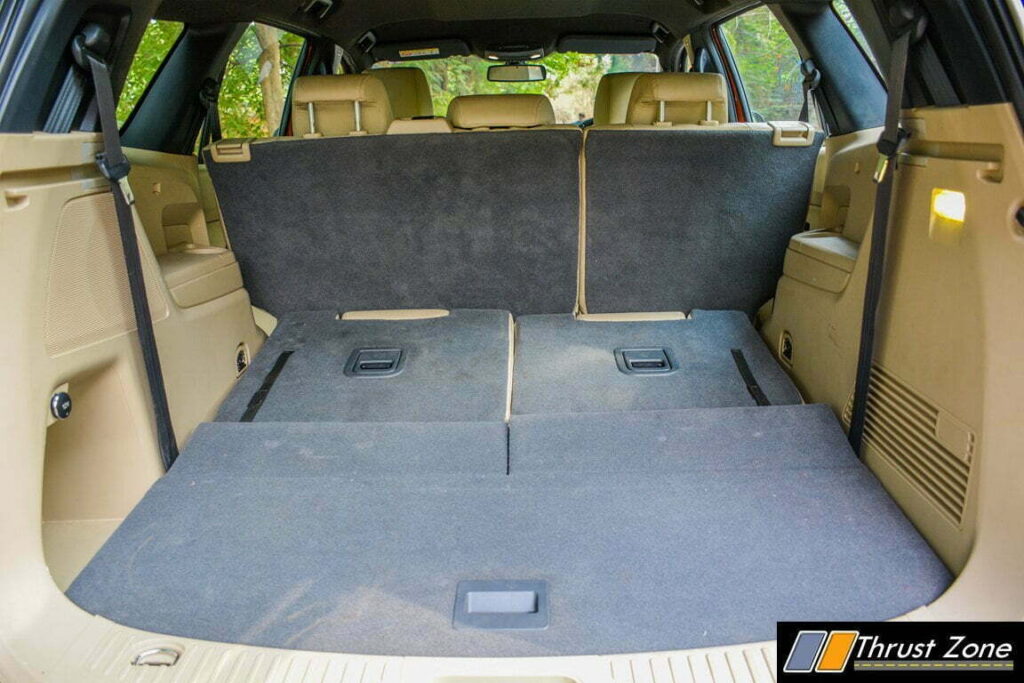 The seats are supportive in all three rows which helps the case even further. There is a good amount of boot space with 7-seats up and when folded, there is a huge amount of space to load any kind of luggage you want to put in there. The glove-box is large and illuminated, the dead pedal was big enough, the A/C worked well in Mumbai’s sub 40 degree heat, the headlight controls are European in approach as the dial is located on the left side. The speedometer does look retro and modern at the same time. 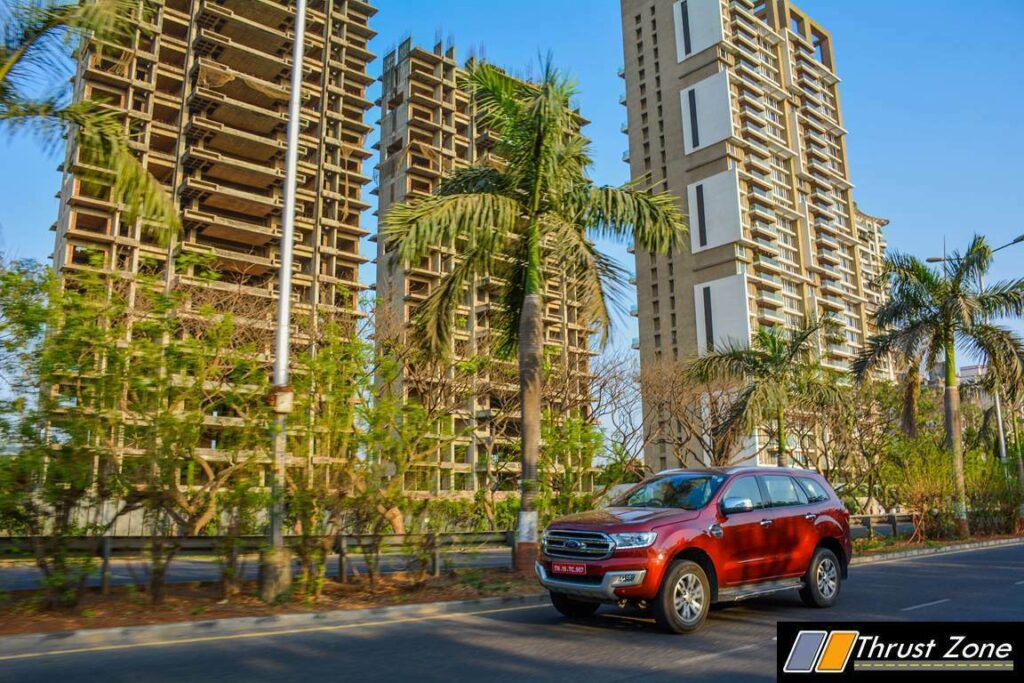 When it comes to the performance, the 2.2 litre unit we had was the 4×2 variant with an automatic gearbox. The motor makes a big 160 PS of power and 385 Nm of torque. The 6-speed torque convertor gearbox is mated to this engine. On paper, the numbers are big, but so is the kerb weight of the SUV. Over 2.1 tonnes, the SUV is heavy even with this base engine. The performance in turn does get affected, the turbo lag is well controlled though, but there is still enough with the transmission shifting a bit slow. 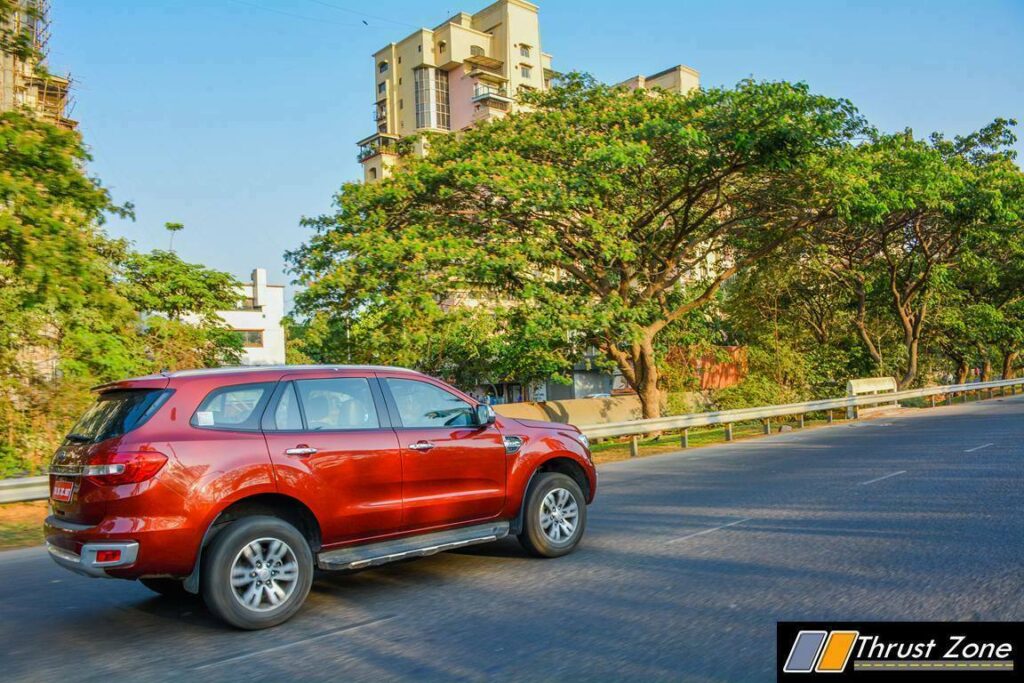 The delay between asking and getting power from the engine is little high than expected and the blame goes to kerb weight. The motor does build up speed, the top-speed is a healthy 170 km/hr on the GPS system of ours and acceleration of 0-100 km/hr got done in 12.4 seconds. We were expecting sub ten seconds for this SUV. Sports mode does turns things up when it comes to engine and transmission reaction times, but the economy starts dropping too. 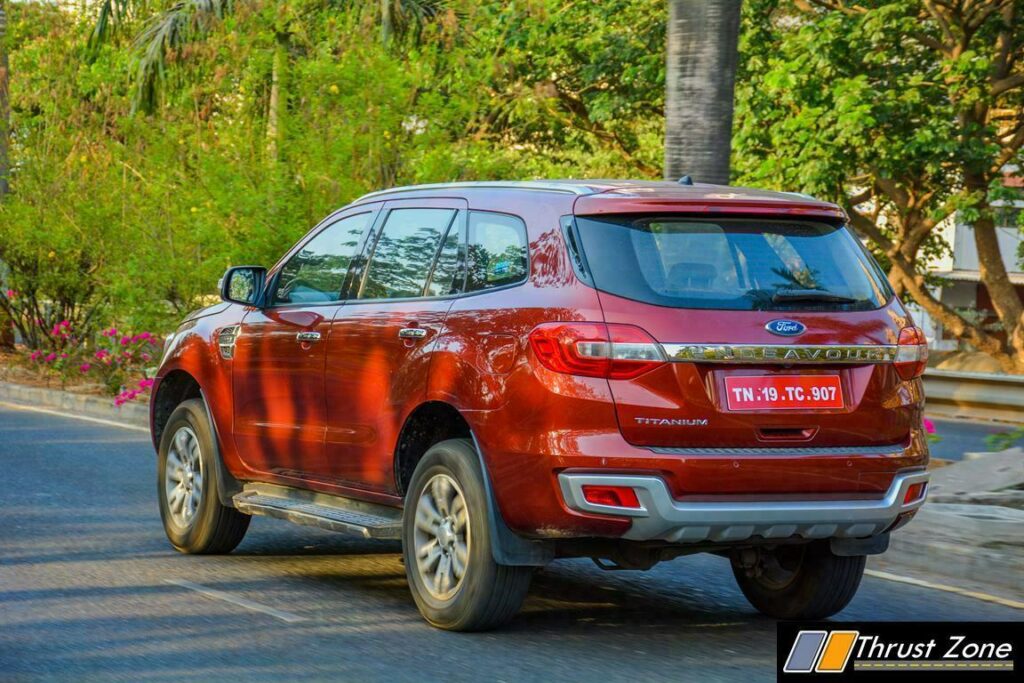 Driveability in the city isn’t an issue and the performance on the highway isn’t dull either, it is the time that it takes is marginally higher for the SUV this size and with this engine. What makes the SUV truly shine is the NVH level. Our team during our testing said and I quote “we only heard the engine twice” This was during the entire test period of 3 days and 500 odd kms. The extremely silent cabin, the superb audio system kept us company rather well. Fuel-efficiency stands at 9.3 km/l. 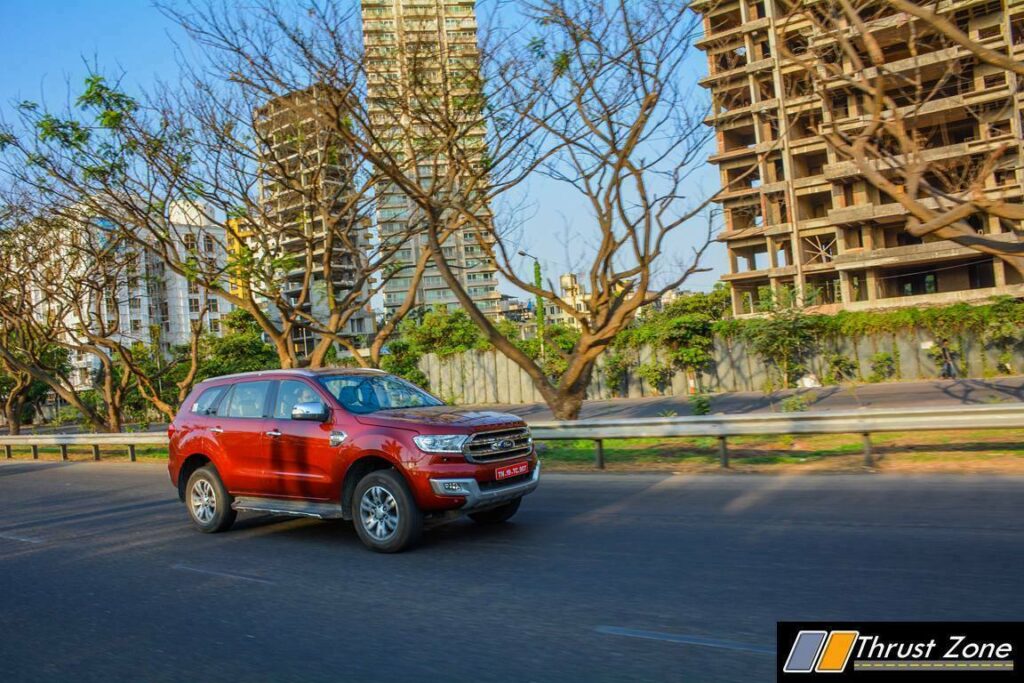 Dynamically is where the Endeavour shines. The short wheelbase, the independent suspension and superior brakes allow to push the SUV of this size hard. Body roll is extremely well controlled, the tyres do a good job on the road and off-road as well. The SUV loves to oversteer whenever the occasion arrives. Traction control turned off, and it can do way too much than expected. 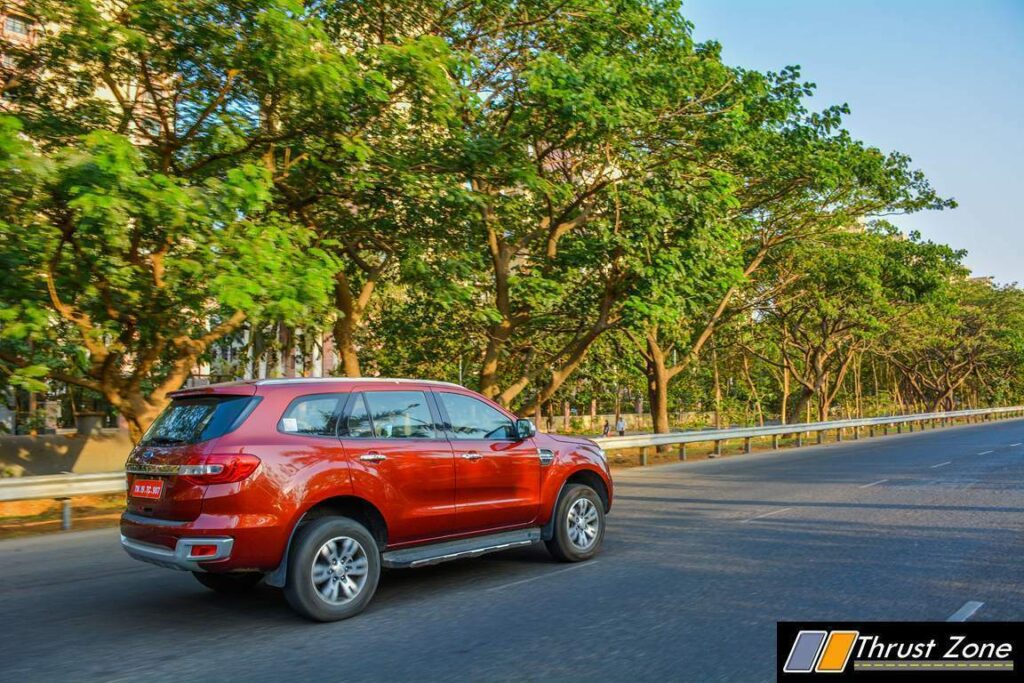 The ride quality is slightly jittery at low to medium speeds over, but as the pace quickens, the jittery-ness vanishes like magic. The ride becomes extremely comfortable while cruising on the highway and the SUV can do the same for hours. The steering is very light for traffic duties and parking and maneuvering isn’t a big issue if you find the size for the vehicle in the first place. Steering despite easy of use is precise and feedback is enough for confidence inspiring driving. Overall, one of the best riding ladder on frame vehicles we have ridden, but there is still a minor room of improvement. 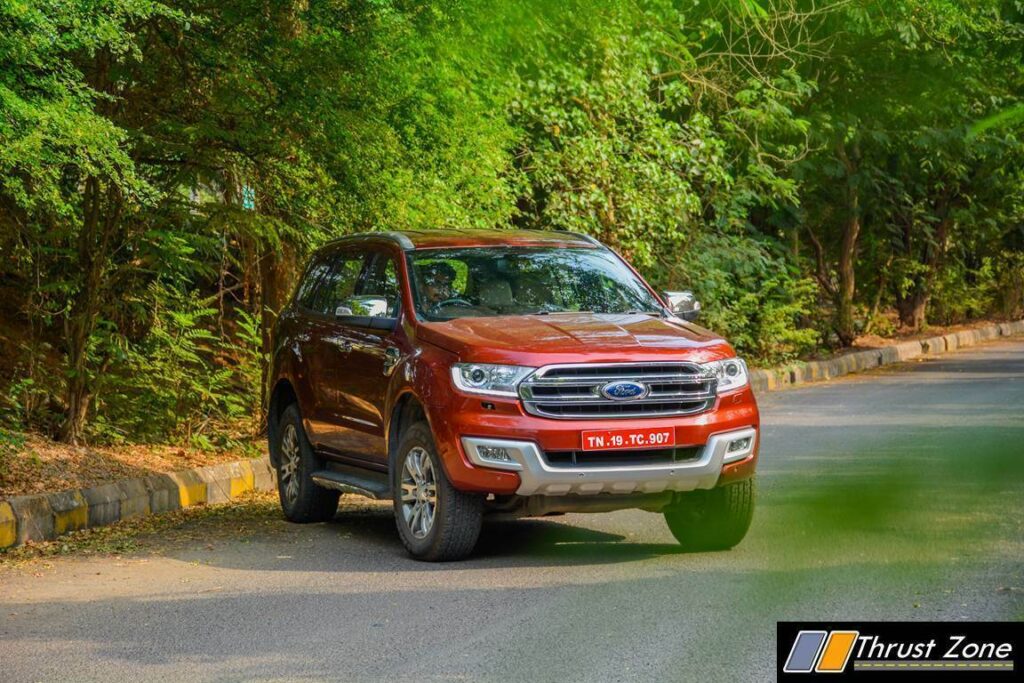 You may think that the mechanical package, the well thought pricing, overall package in terms of features and interior quality works in its favor. However, that isn’t the only case. The highlight, one of them is the design, which is far more elegant and simple in its approach towards its customer. Ford is heavily emphasizing on its service cost which is lower for the Endevaour as well along with the small car that it is sells along. 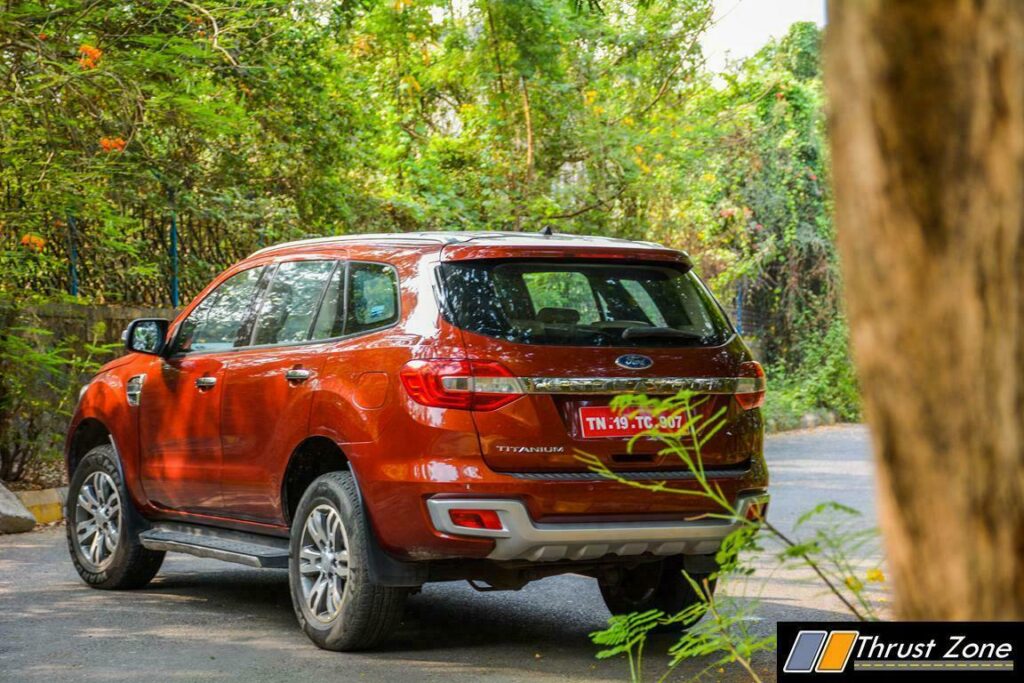 A point where its rival scores high as well, the Ford then, it isn’t left behind. Ford has a winner and the kind of numbers it is already doing since a year, speaks a lot, they are far more superior and they show signs of growing and matching its competition in due course of time. Why? One test ride and a bit of time with the SUV will make you realize that this is something that you always needed in an SUV of this size and price.