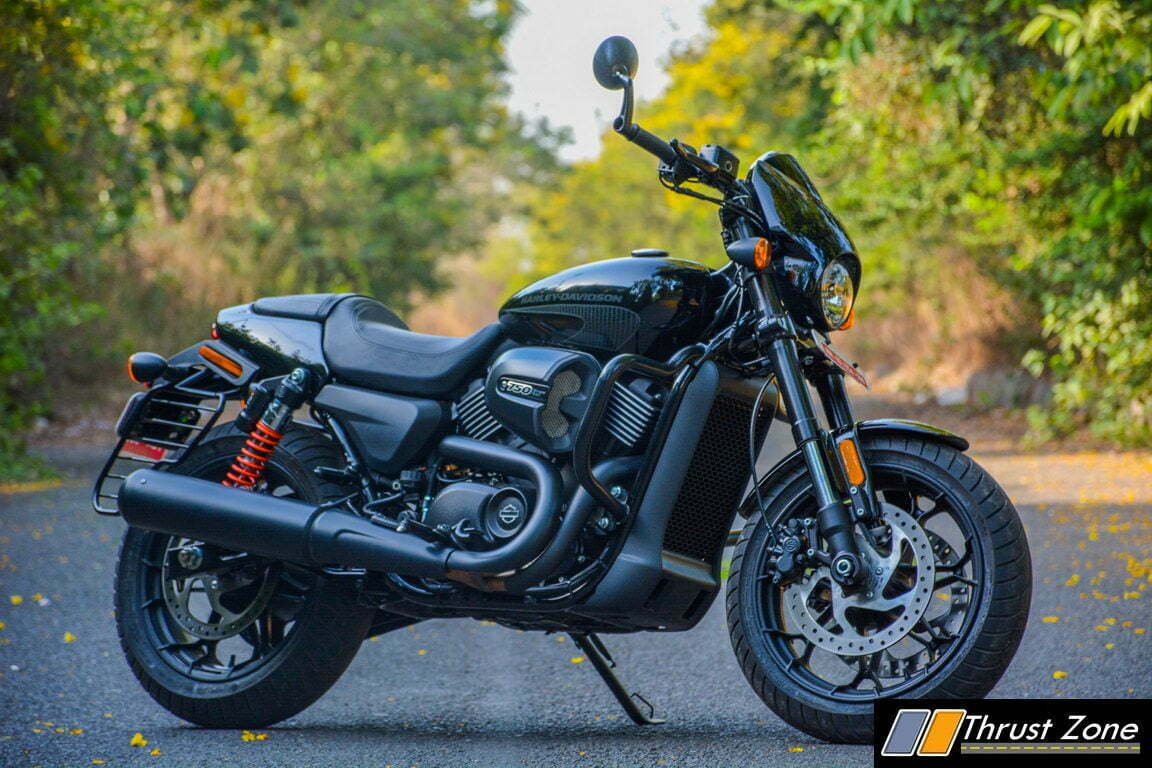 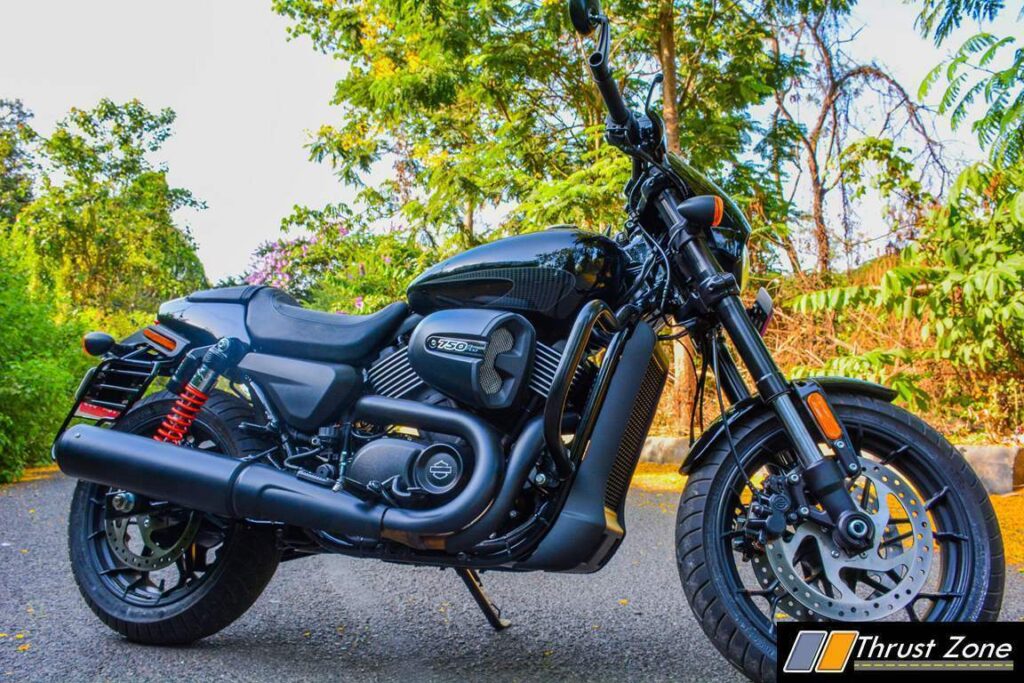 Harley-Davidson is making sure they are catering a market which nowadays loves entry level big bikes, superbikes and high-end motorcycles as well. HD came to India with its entire range and the rest followed all these years. 2014 was the time when it showcased the affordable Street twins such as the 500 and 750 and later that year, the manufacturer chose to launch just the 750 in the country. The motorcycle had mixed reactions over the time and even at the launch.

The motorcycle was low on quality, chassis dynamics weren’t great, cost cutting was evident and what was in its favor was the engine. Harley has upgraded everything in the standard 750 for the year 2016, but 2017 witnesses this, the Street Rod 750. The motorcycle gets everything what the Street 750 deserved, but comes with a new name, as a new package and asks for more money. How is the Street ROD 750 then, we are the first to test it on home soil and we let you know what its like. Read on below! 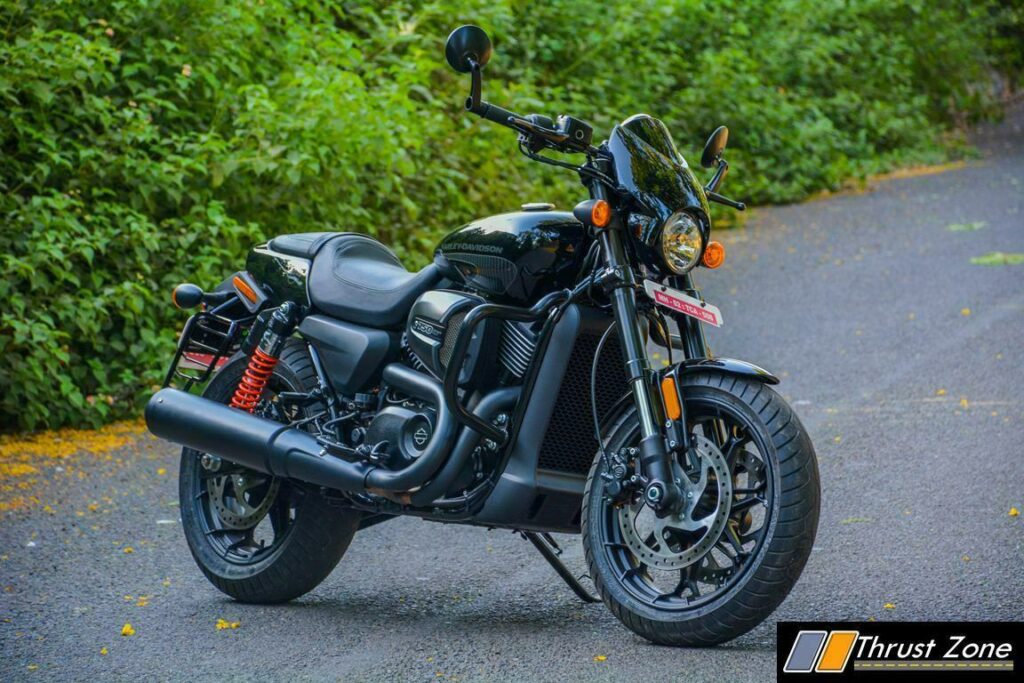 Styling wise, Harley has used the base Street 750, added a cowl on the headlight, kept the fuel tank similar and has added a new tail-piece to make it look cooler. Rear mudguard is ‘forged’ and is a boxy unit. Springs are red in color, exhaust is stubbier and the engine breather is all new this time for the motorcycle. Cosmetic changes are minimum, but the mechanical bits such as the USD Forks, fatter tyres, large twin brakes on offer which makes the bike stand out more than the cosmetic changes this time. Something we will discuss later in this review.

Fit-finish is far more polished affair now, wires are well tucked than before and overall we would still not rate 10/10, but a 8/10. There are reflector as part of the BSIV package at the front and the rear. Headlights remain the round unit, but the rear tail-lamp is now different and is an LED unit. 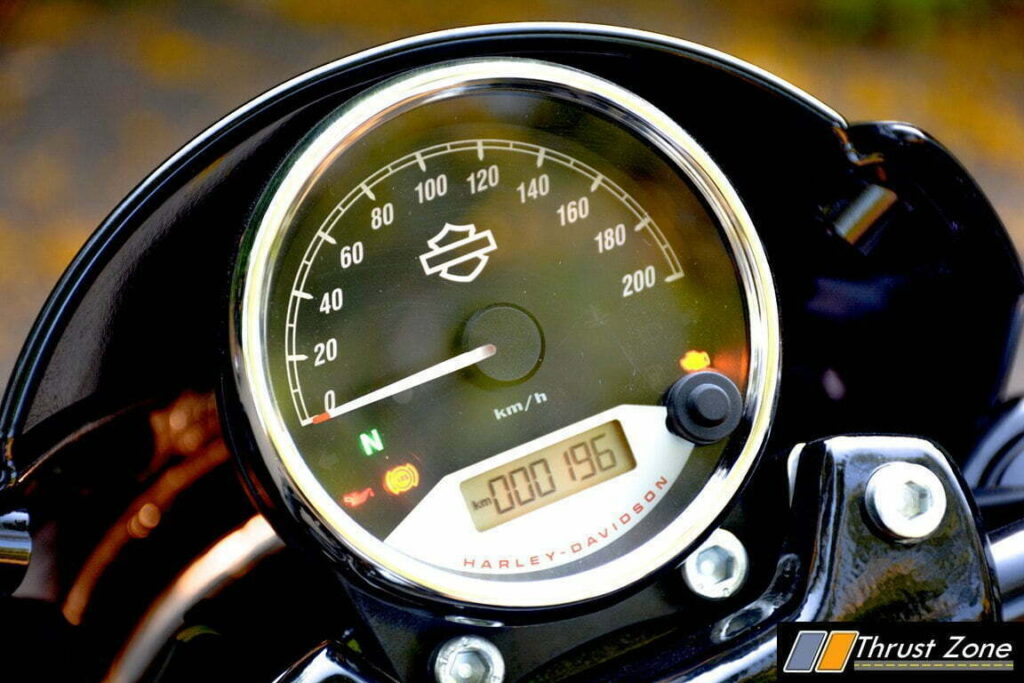 Feature list also remains the same as before as there is a single round dial which is all in one unit. The dial displays speedometer which showcases odometer, tell-tale lights which includes solitary turn-indicators, fuel warning light (no gauge), ABS light and other lights such as high beam and neutral shift light. Tachometer and gear position indicator is the screen displayed when you use the toggle button fixed inside the same dial. Switches remain identical, quality has gone a notch above from the past and the lack of pass light switch continues. 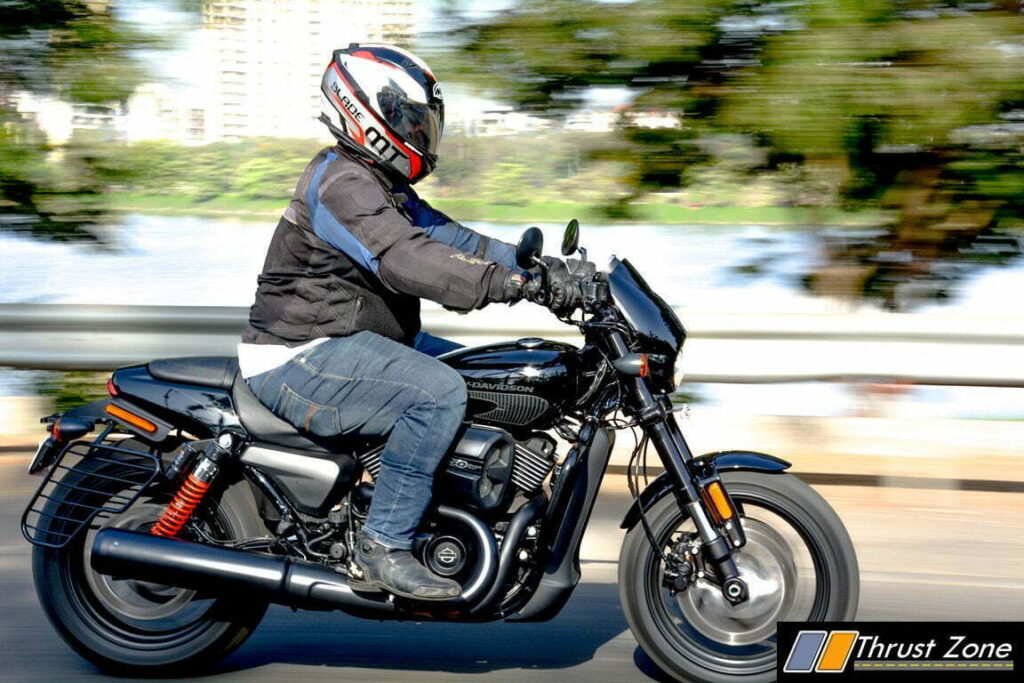 The footpegs are center set, but they have been moved a bit towards the rear than the Street 750. You sit higher, the seat feels more comfier than before and as with the base bike, the pillion isn’t welcome unless he/she is slim and lettuce loving/eating supermodel. However, the sore point is that, again, after the Street 750, Harley hasn’t kept taller riders in mind. The ergonomics are downright cramp for them and smaller riders may also find it a bit of squeeze, but they will find adjust to situation sooner or later. The same cannot be said for taller riders, who are above 5’11. 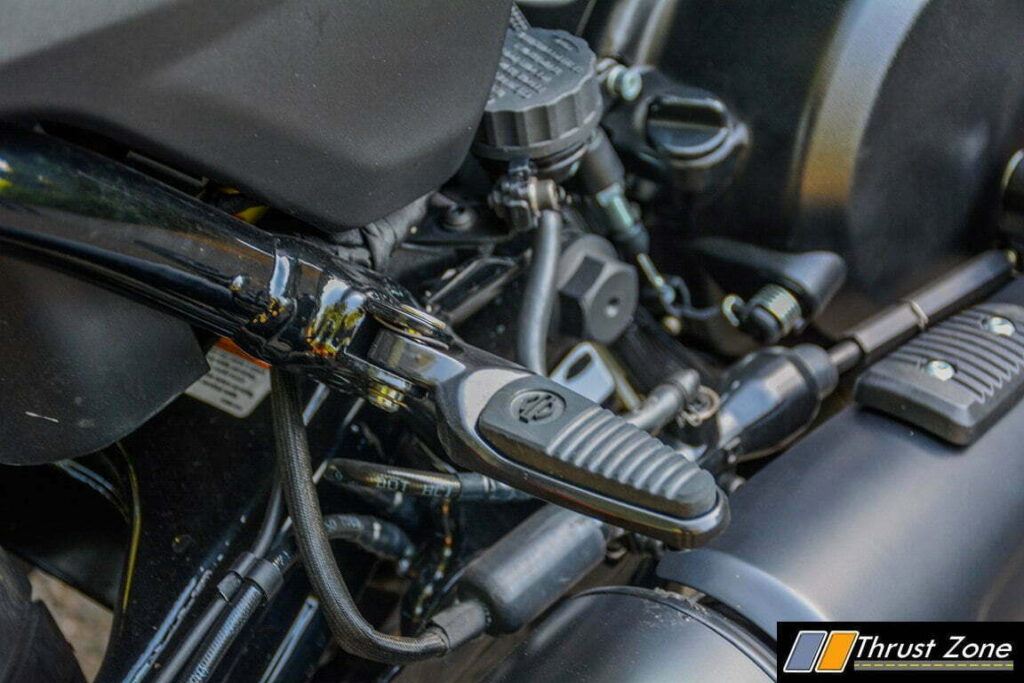 Handlebars are downright flat which lends you a drag bike feel and steering in corners and leverage while taking twisities is a lot higher than before. The height has been raised due to suspension and chassis tweaks which helps in giving a right balance over the Street 750. Taking a u-turn is now a proper big bike affair as it is cumbersome. Overall, slightly more comfortable and offers a more sportier and likeable feel than before. 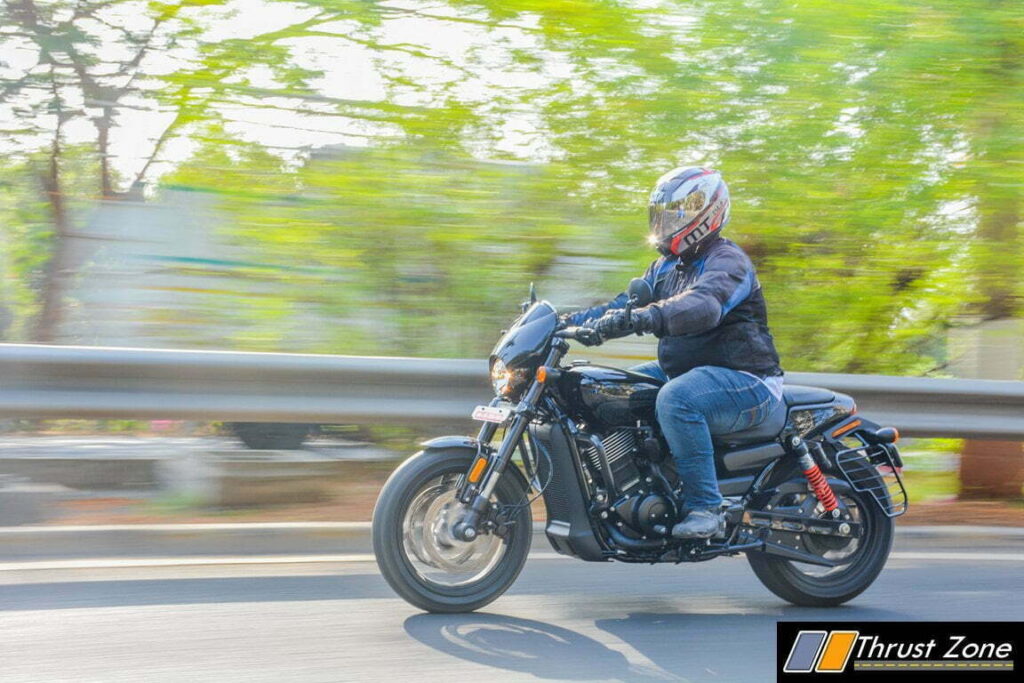 The engine is where the Street 750 wooed enthusiast who ignored everything after they had a taste of the same. Harley says it makes 11% more power and 5% more torque over the Street 750. This should result it in making around 50-52 PS of power and a confirmed 62 Nm of torque. The RPM has been raised to 9000 RPM instead of 8000 RPM which helps in stress free cruising at higher speeds than before. The engine continues to be powerful, torquey and has power throughout the rev band. 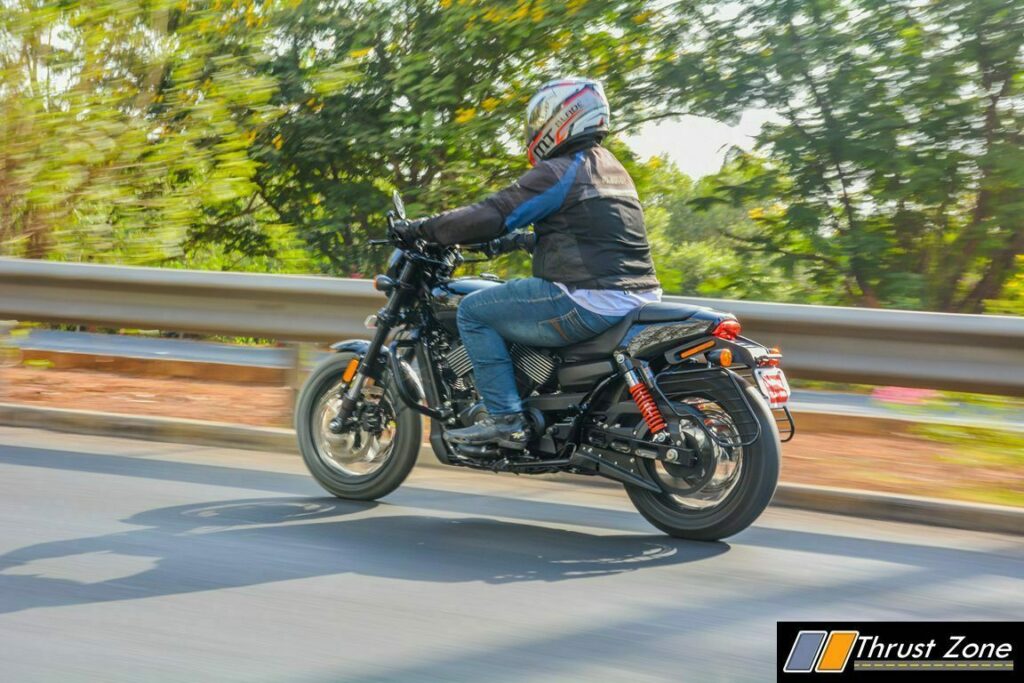 The 6-speed gearbox is smooth, the clutch action is light and the motorcycle goes ahead with the twist of the throttle in any gear and any RPM, but not with the same urgency as before. The low-end torque has been sacrificed a bit to provide a much motorcycle like powerband, which means there is more mid range and top-end power. The engine is now super smooth, silent, but the V-Twin buzz is there. The exhaust note just got even more mute than before thanks to emission norms which has taken the decibel level down. 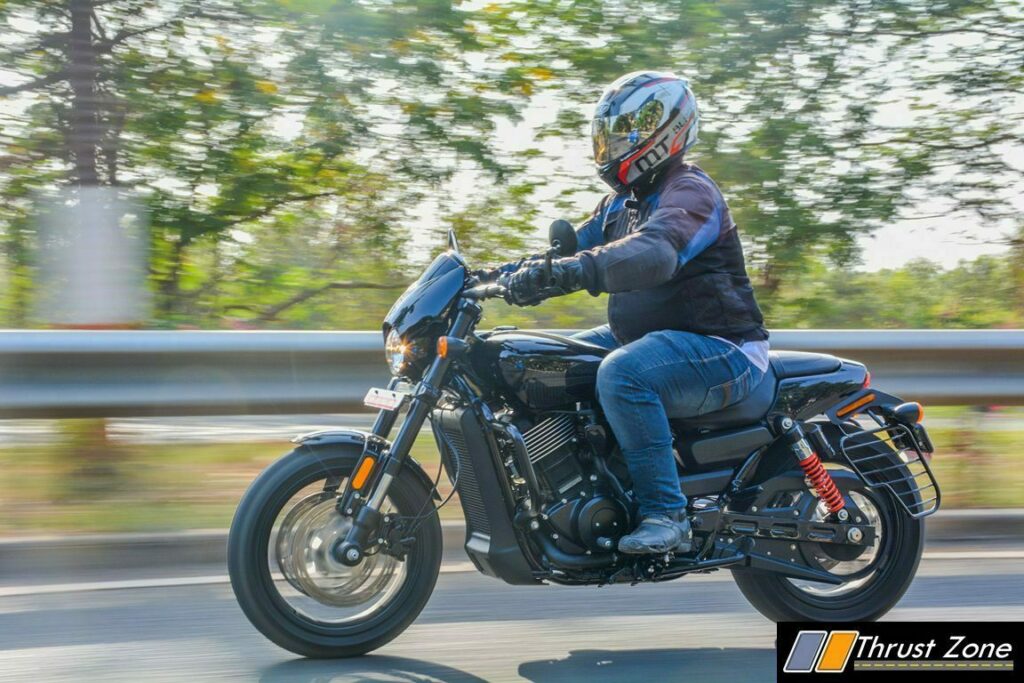 The heat seems to have decreased. Our testing ground was 30 degrees and plus and riding in traffic we did not witness bothersome heat, apart from touching the cylinder head with the back of our thighs. of course, with all cruisers if you get stuck in bumper to bumper traffic, the heat can be irritating. The throttle response is much better and the fuelling is not jerky. However, throttle is snatchy at slow speeds by a subtle margin, which is apparent as the front dives slightly down every-time that happens by a small margin. Revolution X engine just got a big evolutionary change and it is for the good. Don’t worry about the sound, aftermarket exhaust by HD-India itself will make you feel better about riding a Harley. 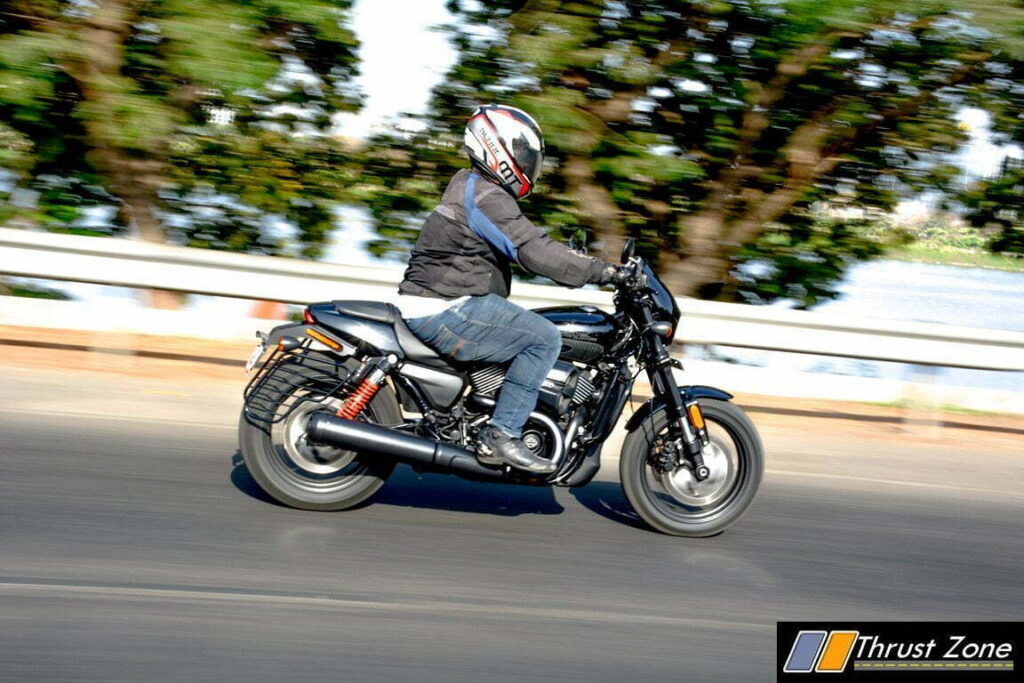 Dynamically, the chassis is stiffer, the major highlight is the inclusion of USD front forks at the front and gas charged 5-step adjustable dual sided shocks. The ride quality is taut and compliant at the same time. Not very harsh. Feedback from the front is good enough, the massive decrease in rake is apparent and the motorcycle is very eager to change direction. However, the long wheelbase doesn’t make it super responsive orange motorcycle that most of us enthusiast are used too. However, the effort by Harley in this area is apparent and is a job well done indeed. 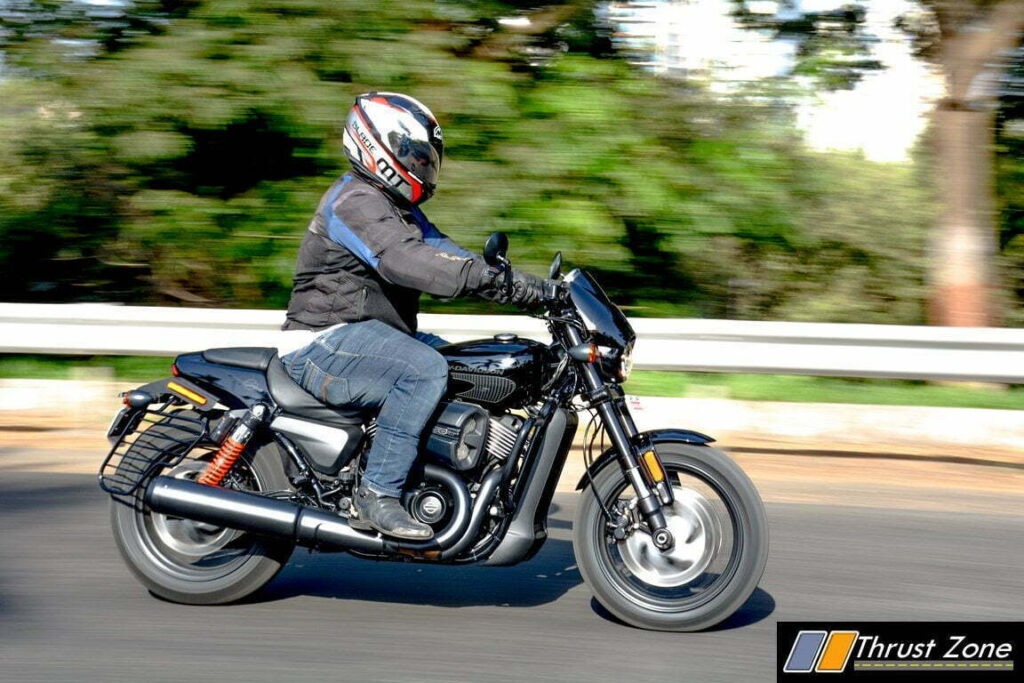 The brakes, they are better than before, however, in true HD tradition, there is no initial bite at all. Post that there is a lot of progressive power which will make the big bike, even at high speed stop on time. Backed by ABS and sticker MRF REVZ tyres which are custom made for this motorcycle feel light and disconnected at the same time, but do the job really well. ROD 750 is agile in the city, stable at high speeds in a straight line and while taking large sweepers. All the ride height, ground clearance and raised pegs means no worrying of scrapping unless you go to track and find its limits. 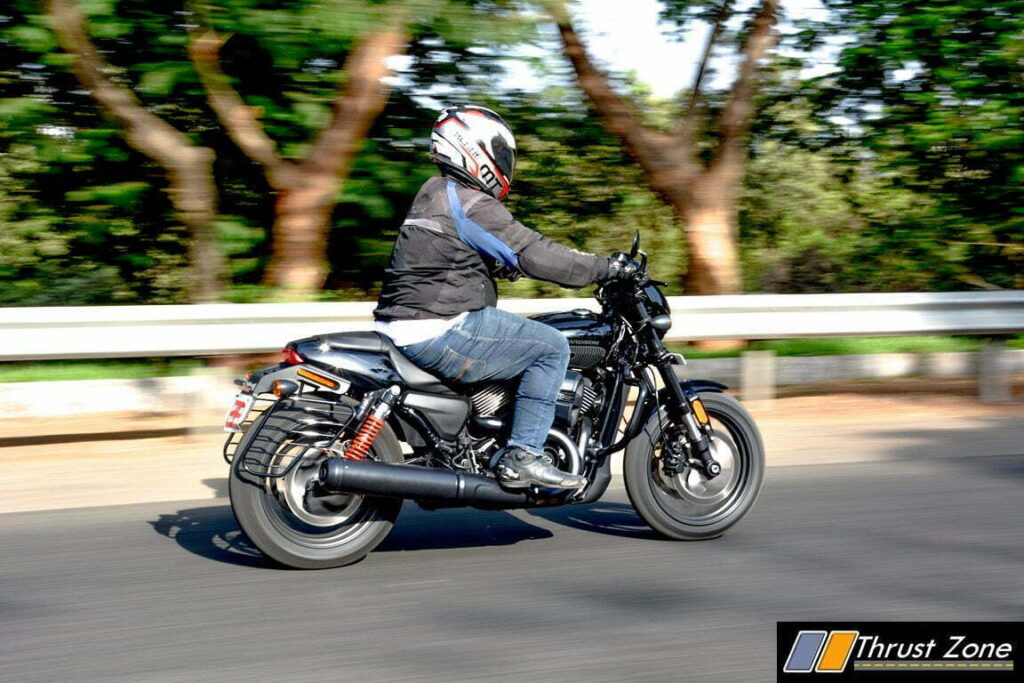 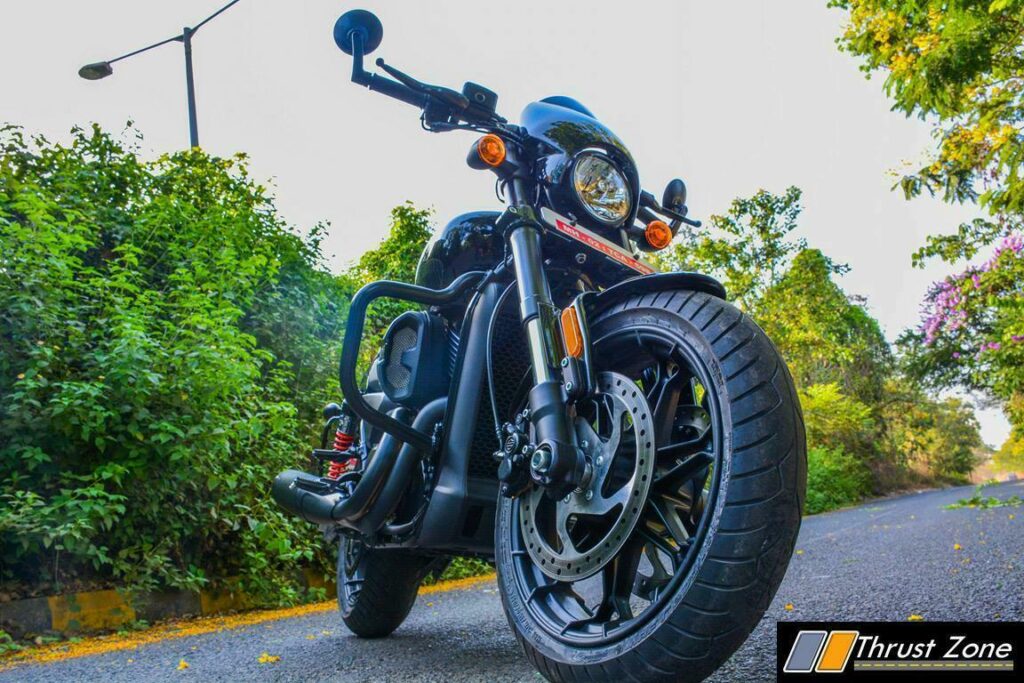 Overall, the hype for ROD 750 is worth it. The motorcycle is dynamically much better, all the flaws from the base bike are gone and the Street 750 platform spawns a motorcycle which is a desirable Harley for the enthusiast on a budget that comes after a long time. Street ROD 750 isn’t the ideal bike to do long distance if you are a taller rider, the shorter the rider the better it is. Like other Asian nations, India doesn’t have many tall riders and this idea then, should work with the masses rather well. In fact, if he or she has the money but loves sportier motorcycles and wants an Harley at the same time, the Street ROD 750 is just the bike for you.