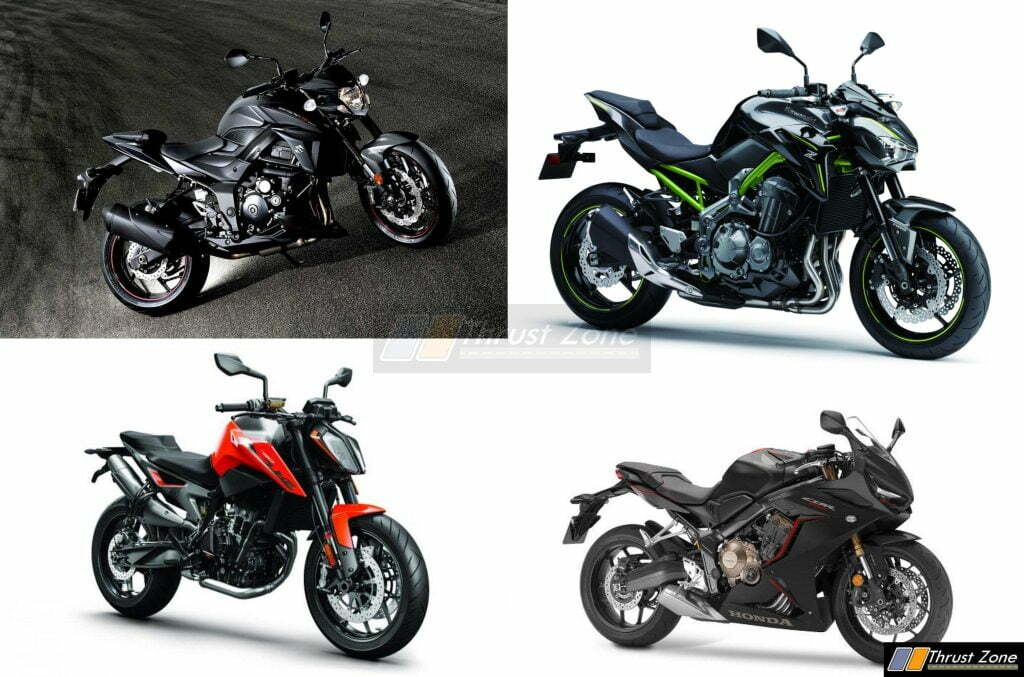 Some Days ago, Honda officially announced that they have commenced with the bookings for the CBR650R. According to the reports it also suggests that Honda will launch the CBR 650R at a very competitive price which will be less than Rs 8 lakh. The bookings for the same will be available through its premium dealership chain – Honda Wing World Dealers. With the launch of the CBR 650R nearing by, let’s have a look at how it competes with its rivals such as the KTM Duke 790, Kawasaki Z900 and the Suzuki GSX S750 on papers.

In terms of the dimension, the Honda CBR650R has a length of 2130mm and height of 1150mm and this makes it the longest and tallest in this comparison. This will be an added advantage to the CBR 650R as it will help in better riding dynamics and it will also help providing a better space for the pillion rider. The Suzuki GSX-S750 and the Kawasaki Z900 are a bit heavier than the Honda CBR 650R, but it is the KTM Duke 790 which is the lightest of them all as it weighs 174 kg. But if we compare the 2019 Honda CBR 650R with the previous CBR 650F model which was launched, it is now six kilograms lighter and this in turns has also improved the power to weight ratio by eight percent.

Honda equips the CBR 650R with a USD Fork in front which is powered by Showa, whereas at the rear it gets a monoshock unit. On the other hand, the suspension duties on the Suzuki GSX-S750 is taken care by standard USD Forks at the front. If we have a look at the KTM Duke 790 and the Kawasaki Z900 it gets a WP USD Fork and a adjustable USD fork at the front. All the bikes get a monoshock unit at the rear. Coming towards the braking duties, all the bikes are equipped with twin discs at front and a single disc at the rear with dual channel ABS unit. In the comparison, only the KTM Duke 790 gets switchable ABS.

On the other hand, the Kawasaki Z900 is powered with 948cc, four cylinder engine that generates 123 bhp of power and 98.6Nm of twist and this makes it the most powerful bike in the comparison. But the Z900 is the only bike which misses out on traction control which can be seen on all the other bikes. With this, the CBR 650 R is the only bike in the comparison that has a lower capacity engine, hence the power and torque produced is comparatively less.

The features and engine capacity of all the four bikes are different but they are and will be priced between the Rs 7 lakh to Rs 8 lakh bracket. As of now the exact price of the KTM Duke 790 and Honda CBR 650R are unknown. But it is expected to be priced in between the exact same price bracket. Dealerships have started taking bookings for the KTM Duke 790 and it is expected to be launched somewhere around March 2019.