Japanese bike maker Honda has finally forayed into a rapidly growing 160-200cc category of with its newest offering, the Hornet 2.0. In this specification comparison review, we pit this new Honda against the TVS Apache RTR160 and Bajaj Pulsar NS160 to find out which one of these comes out on top.

Engine and performance
Powered by a 184.4 cc, single-cylinder air-cooled engine, Hornet 2.0 puts out 17.2bhp and 16.1Nm of max power and max torque respectively. Despite being a brand-new engine, the cubic capacity and the compression ratio of the motor are similar to ones on the Honda CBF190R and CB190R models, albeit Hornet’s output is slightly on a higher side.
Hornet 2.0 and Pulsar NS160 put out identical power figures though Honda has an advantage in terms of higher torque output. Also, Honda weighs 9kg less than Bajaj, thereby further equipping it with better performance. Honda also has an edge over the TVS in both power and torque but its air-cooling technology pales in front of the oil-cooled feature of both Bajaj and TVS. 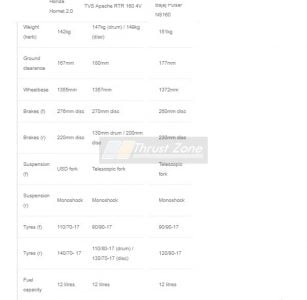 Chassis and Suspension
Anchored on a brand-new chassis, the new Honda Hornet 2.0 the lightest motorcycle in this comparison. Honda has also gone one step ahead and fitted the Hornet 2.0 with USD forks at the front while both its rivals Apache RTR160 and Pulsar NS160 have got the traditional telescopic forks arrangement upfront. There is no difference in the rear suspension as all bikes in the comparison comes equipped with a mono-shock suspension system. Hornet 2.0 has another advantage up its sleeve in the form of a widest rear tire of 140mm and coupled with the largest 276mm front disc, Honda makes a solid impression on chassis, suspension, and braking system. 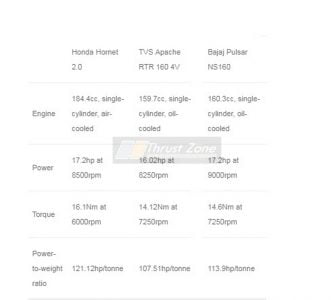 Features and equipment
The digital instrument cluster is a standard part of the equipment on both Honda and TVS while the Bajaj has got a combination of digital and analogue arrangements for displaying the information to the rider. Hornet 2.0 has got all its illumination powered by LED elements although it’s Apache RTR 160 which walks away with the honour of having the most advanced and sophisticated features. Take, for instance, the Glide Through Technology (GTT) of TVS which helps the bike to crawl in congested traffics by feeding fuel into the engine without throttle inputs. Bajaj Pulsar NS160 hasn’t received any upgrade for quite a long time now and hence, it offers regular features sans any modernity.

Style and design
In terms of styling and design, Honda Hornet 2.0 comes across as a sharp, dynamic, and aggressive motorcycle. Thanks to its futuristic headlamp, X-shaped tail lamp, fuel-tank mounted ignition, pillion seat faux air vents, Hornet 2.0 evokes a strong sense of desirability among the prospective buyers. Apache RTR160 also features modern styling as TVS equips the bike with new-age features while making a transition from BS4 to BS6 avatar. Bajaj NS160, on the other hand, is now long in the tooth and lacks the modern repeal of the rivals.

Price
At Rs 1.27 lakh, Honda Hornet 2.0 is the costliest in the lot. TVS Apache RTR 160 starts at Rs 1.04 lakh while peaking at Rs 1.07 lakh while Bajaj Pulsar NS160 costs Rs 1.07 lakh (all prices, ex-showroom Delhi). For extra money spent on Hornet, you’ll receive USD forks, widest rear tire, and largest front disc though the price of the Honda puts it into a difficult terrain where it stacks up close to 200 cc offerings than competing against 160 cc bikes.

BREAKING! Mercedes AMG India Models To Be Localized! GLC AMG To Be First