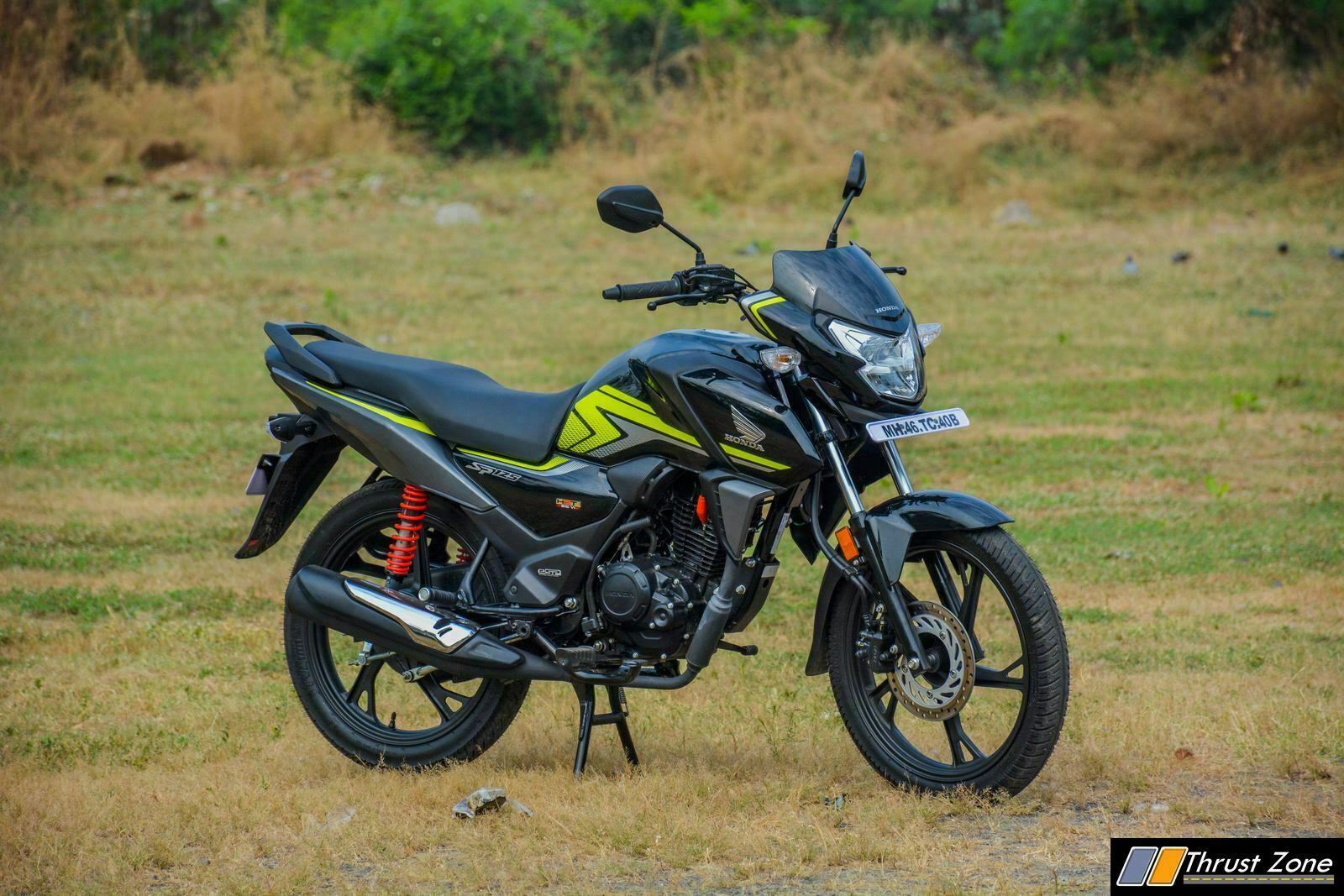 The commuter segment is one of the most valued segments in the Indian two-wheeler market and contributes the most as well. Pricing, mileage, comfort and maintenance are few majorly demanded aspects. Honda has come out with its SP 125 and here’s what exactly makes the bike a potential rival to the other commuters out in the market. The 2020 Honda SP 125 appears and is a very compact 125 cc motorcycle. Compact enough to filter through stop-go traffic in the city or even the alley you’d take as a shortcut. Now make no mistake, the compactness of the bike hasn’t led to any compromise on the looks of it. 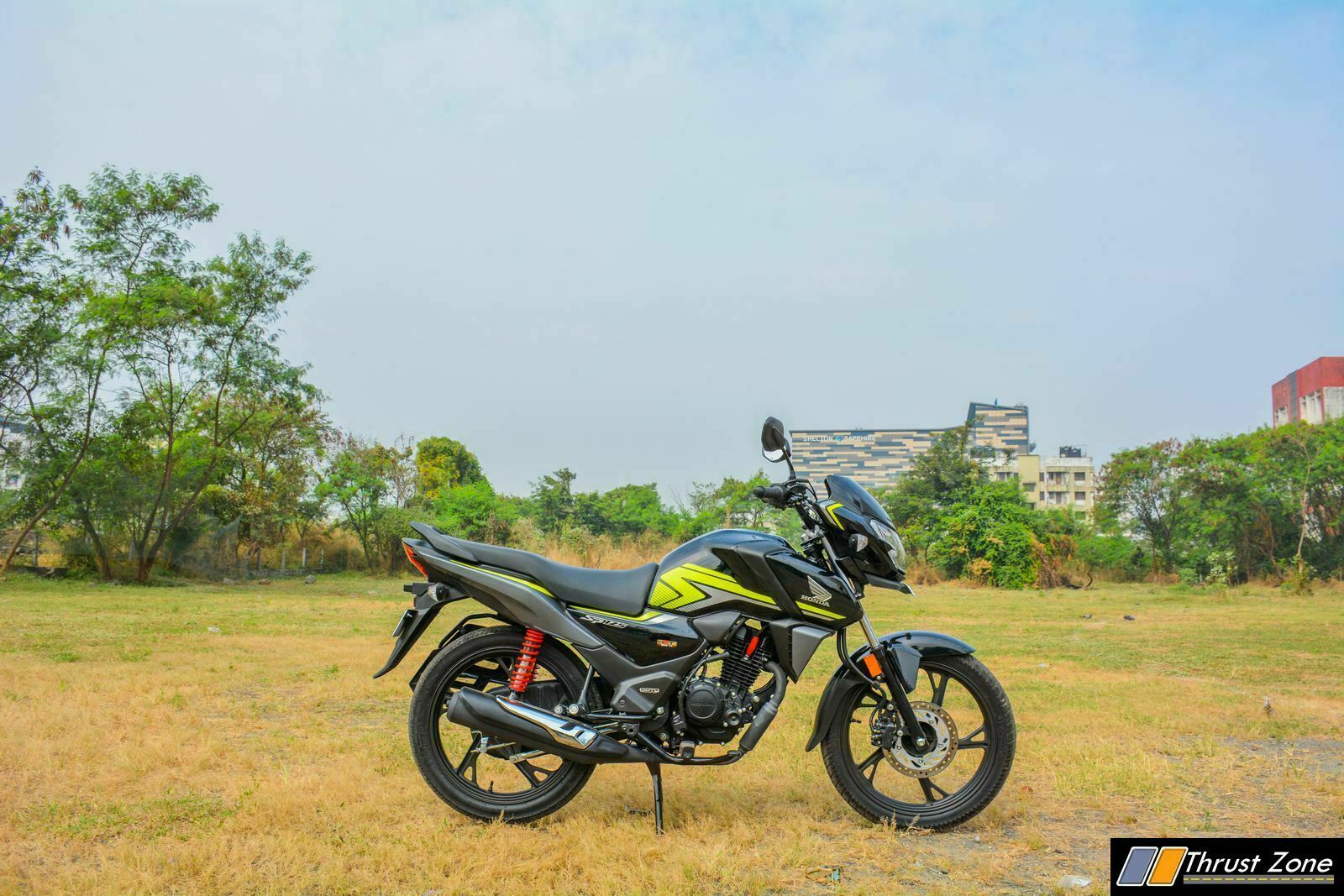 The SP 125 looks decently handsome, courtesy the cladding on the front end of the fuel tank. The front fascia of the motorcycle, namely the LED headlight unit and the surrounds not only serve the purpose of illumination but also add up to the sharp design. For added styling elements, the exhaust has a matt finish topped by a chrome piece over it. The bike is available in 4 paint schemes, Striking Green, Imperial Red Metallic, Pearl Siren Blue and Matte Axis Grey Metallic. 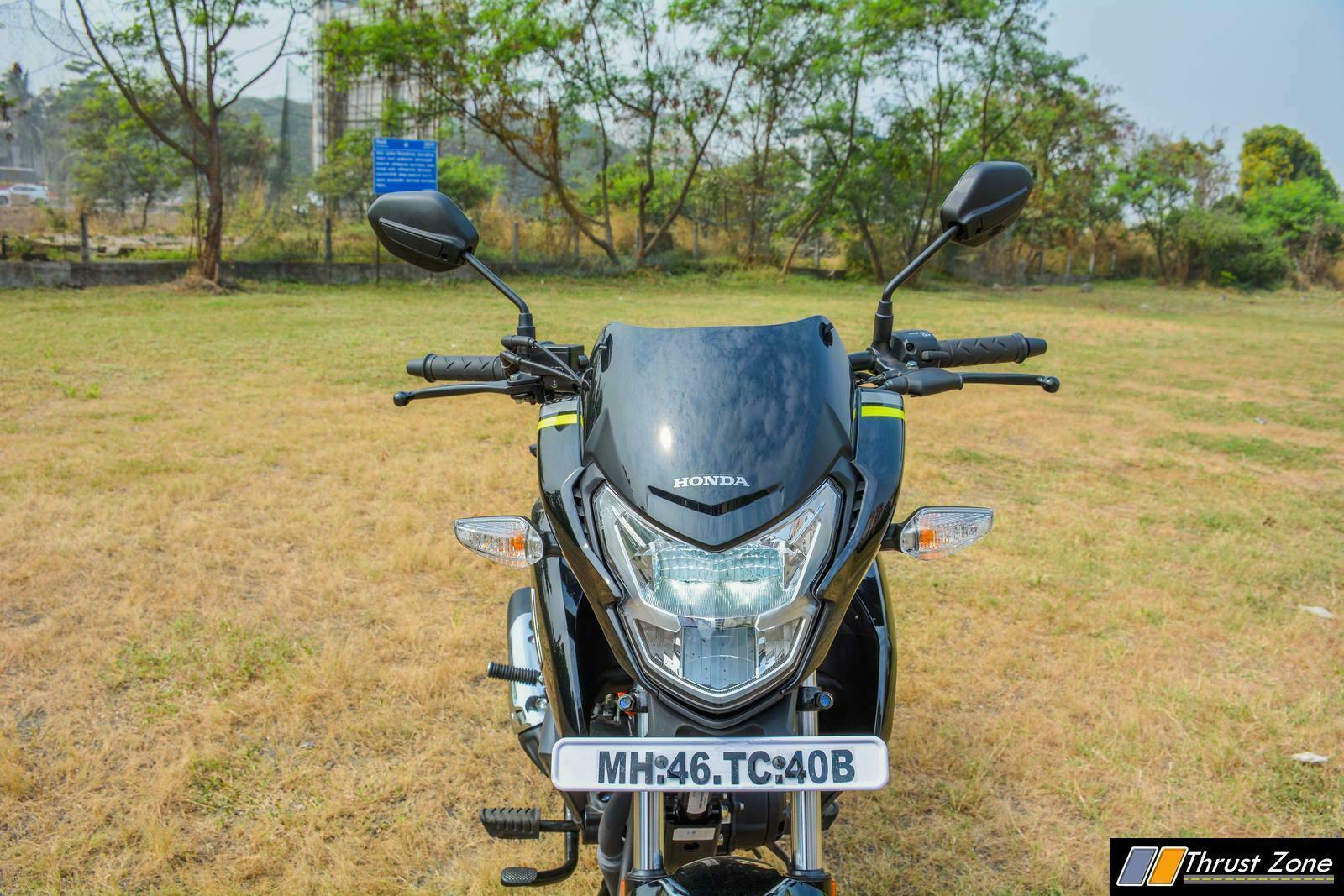 The SP 125 comes equipped with LED bulbs for both, the low and high beam that is controlled via all in one integrated switch. The switchgear quality is good enough and none of the buttons feel flimsy, including the engine kill-switch and two buttons to toggle around the menu on the instrument cluster. Speaking about the full-digital instrument cluster, the setup is very neat and clear. 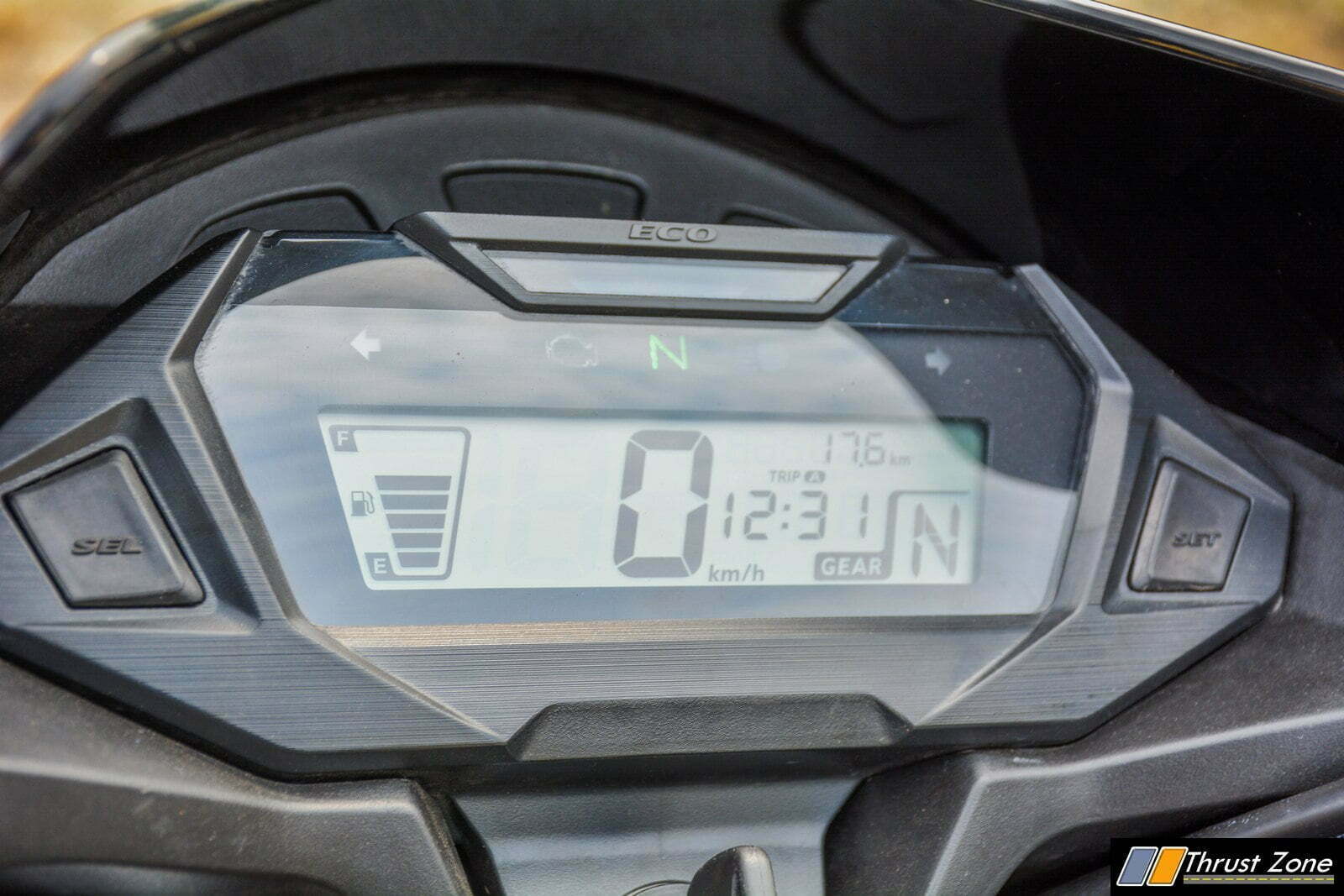 It displays a host of information. Starting from the left, we have the fuel gauge, on-board speed, standard clock time, gear, range, mileage, and the trip meter. Above all the display, we have the neutral indicator light, surrounded by a check engine light on the left and high beam indicator to its right. Honda has ditched the rpm meter and placed a green-coloured light instead. The green light-bar lights up according to the speed and gear engaged showing that the bike is running at ‘efficient speed’. 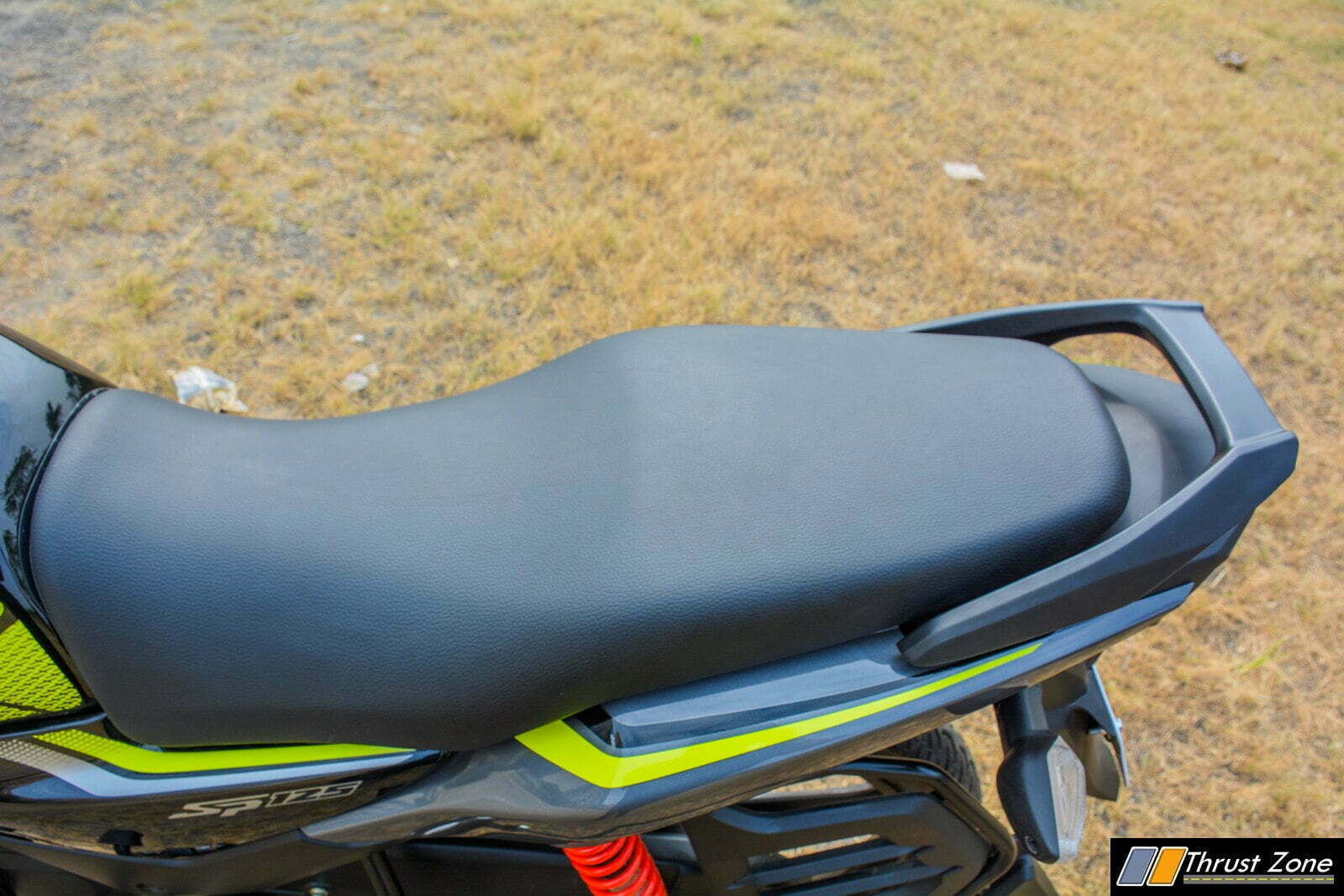 The Honda SP 125 comes with a single-piece seat and no questions asked, it has enough room for the rider and the pillion to move around and is equally comfortable for all-day commuting. The pillion comfort has received equal attention as the bike comes standard with a grab rail wrapped in a soft and grippy material. The footpegs are placed well and have enough distance between the rider and pillion’s feet. The handlebar is wide and mid-set for the rider’s comfort and manoeuvrability. We rode the bike in bumper to bumper traffic and had a good time filtering through the vehicles without awkwardly hitting anyone else’s mirrors. The mirrors on the SP 125 offer unquestionable visibility and make it easy to switch lanes whenever needed. 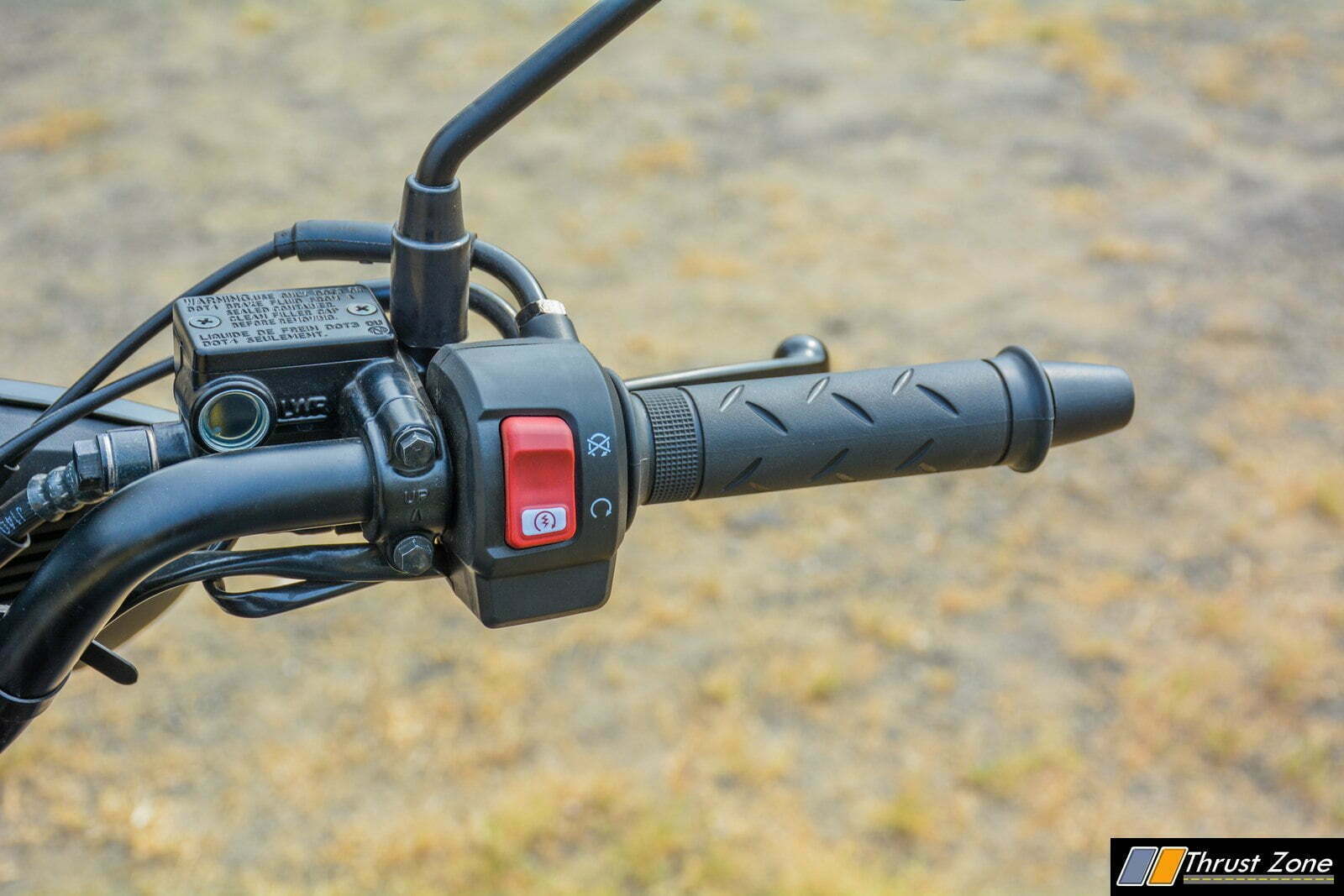 The Honda SP 125 comes equipped with appropriate suspension setup, just like a commuter should. At the front, we have telescopic forks and the rear we have hydraulic shock absorbers. Not being biased but the suspension on the SP 125 is so darn good. Right from running over the potholes to the cheap thrills of jumping over speed-bumps, not once did I feel like getting my spine checked. 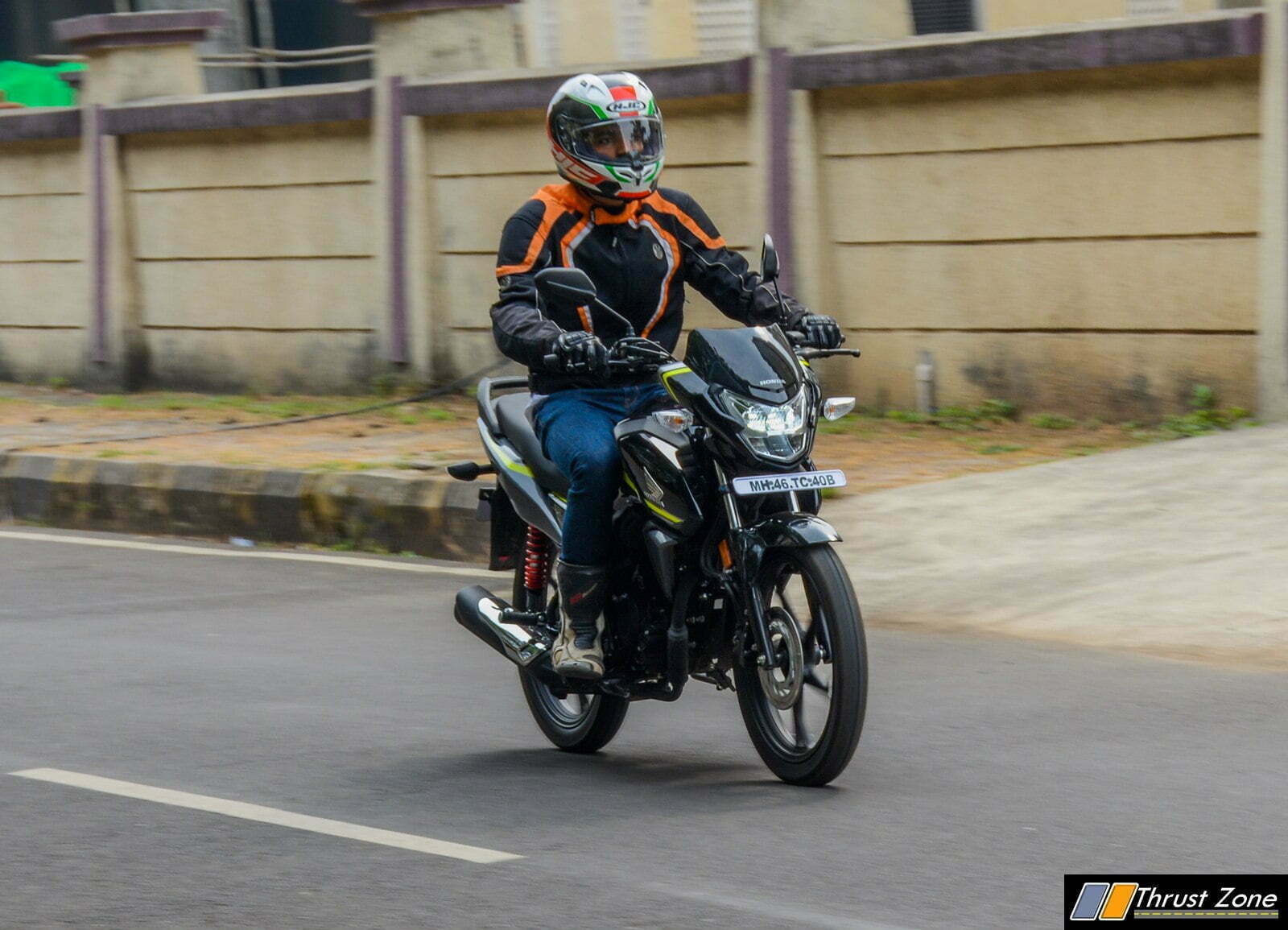 Now the bike checks all the boxes right from the suspension to comfort, nimble handling, but what about the acceleration and the brakes? Well, the acceleration is just like it should be from a 125cc bike, nothing like you will be thrown off the seat with one wheel in the air. The acceleration is docile and the power delivery is linear right from the stop to the top. The punch is good enough to escape mediocre traffic and the engine feels quite peppy. At speeds of 100 kmph and upwards the vibrations do tend to creep in from the handlebar and the footpegs, but that’s bearable. 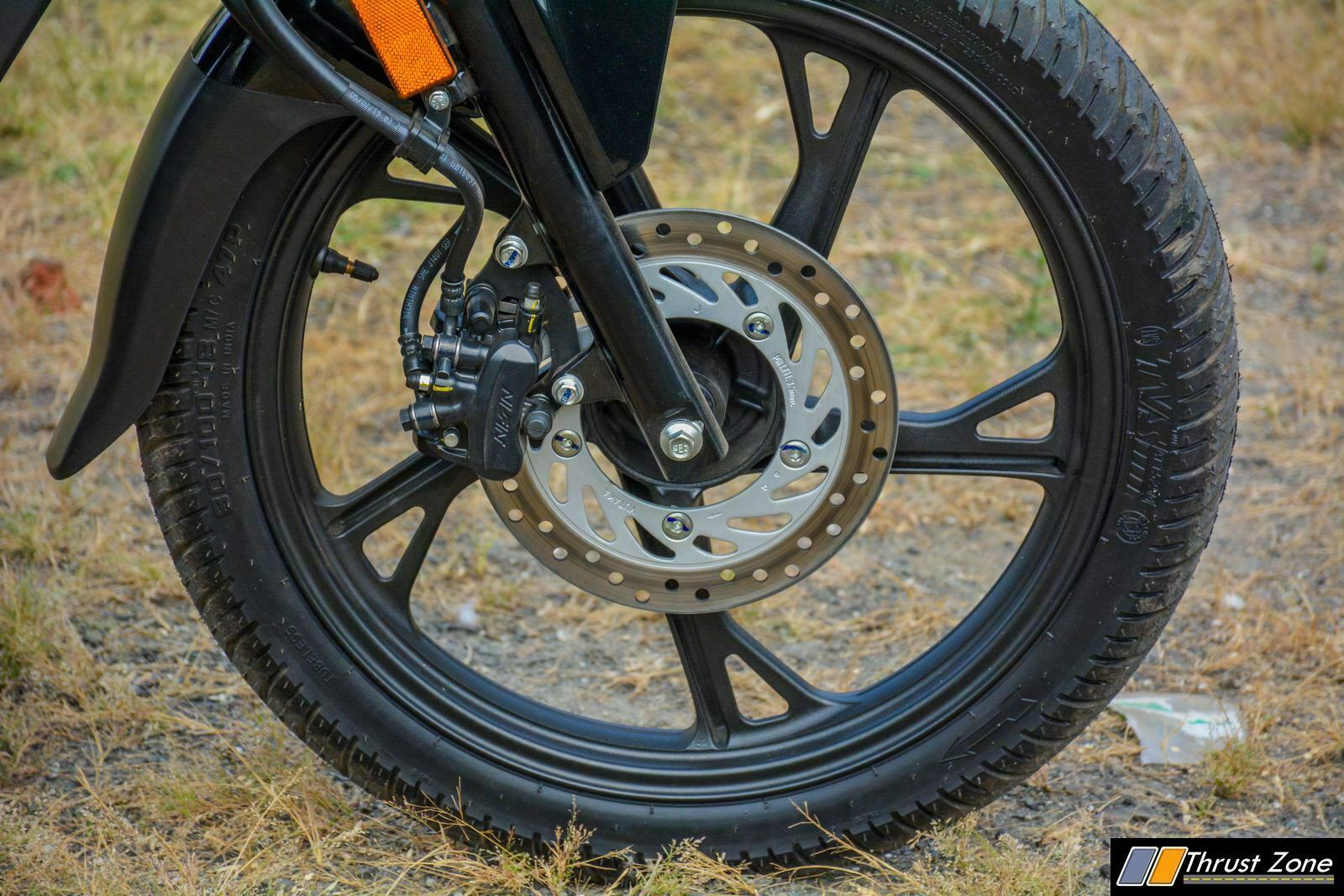 For the eager ones, we managed to clock a top speed of 107 kmph on the speedometer with a rider weight of 64 kgs. Considering that the Honda SP 125 packs in a BS6 compliant, 124cc, 4-stroke single-cylinder engine that churns out 10.7 bhp and 10.9 Nm of torque, the aforementioned top-speed is quite impressive. Thankfully, the engine comes mated to a 5-speed gearbox, and the gearshifts are perfectly smooth. The addition of a 5th cog has surely added to the ride quality and the overall mileage. While Honda claims the SP 125 to have a mileage of more than 70 kmpl, we were easily clocking around 60 kmpl of mileage on the freeways and around 53 kmpl in aggressive city riding with constant up and downshifts. 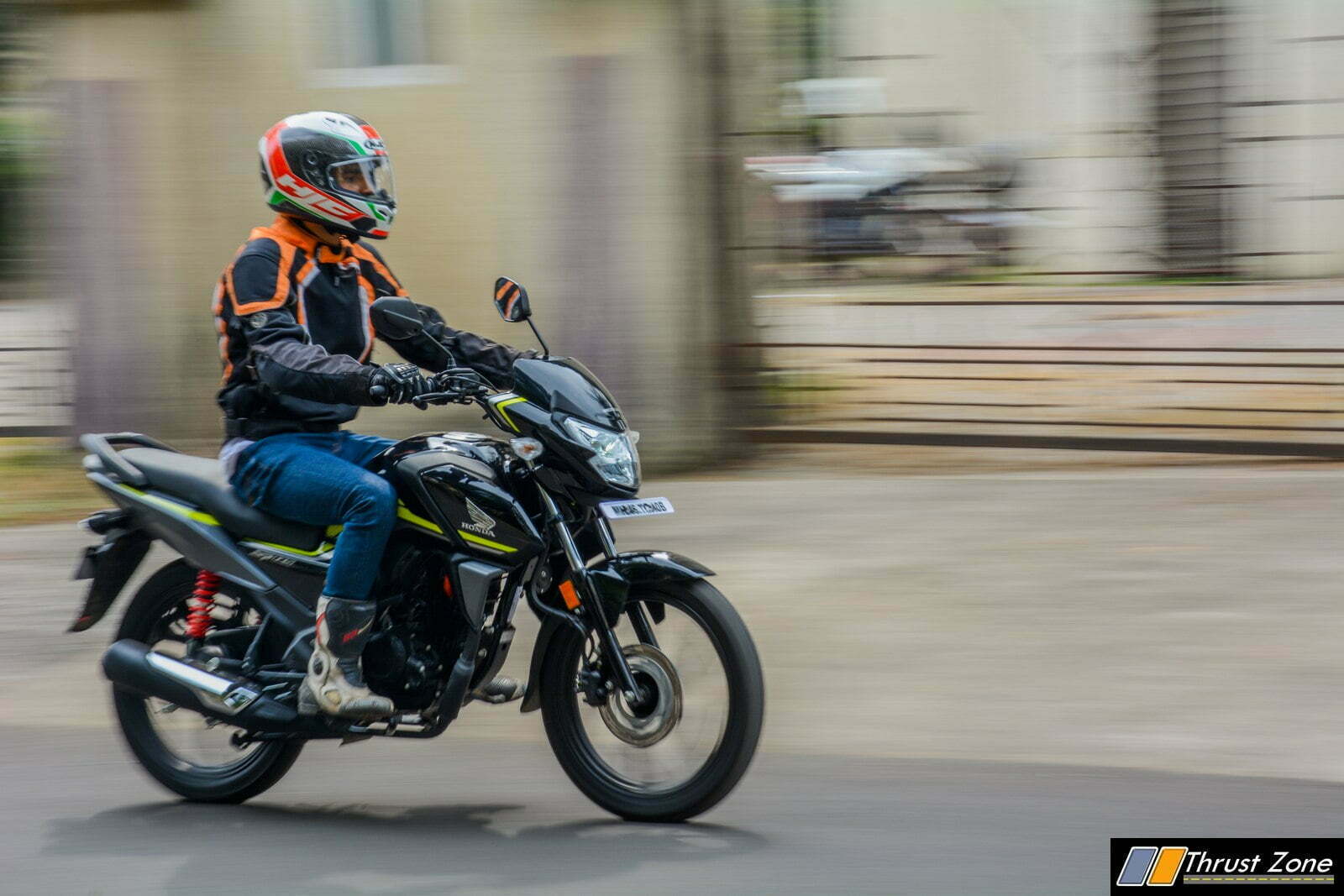 Most of the commuters don’t bother to downshift even at low speeds until the bike would struggle to deliver the power. Well, the SP 125 has the fuelling and gear ratio just right and you won’t have to fiddle with the gears repeatedly. The bike comes with silent start ACG starter motor which keeps the it remarkably quiet when the engine is brought to life. One may only understand how good of a feature it is unless experienced in person. 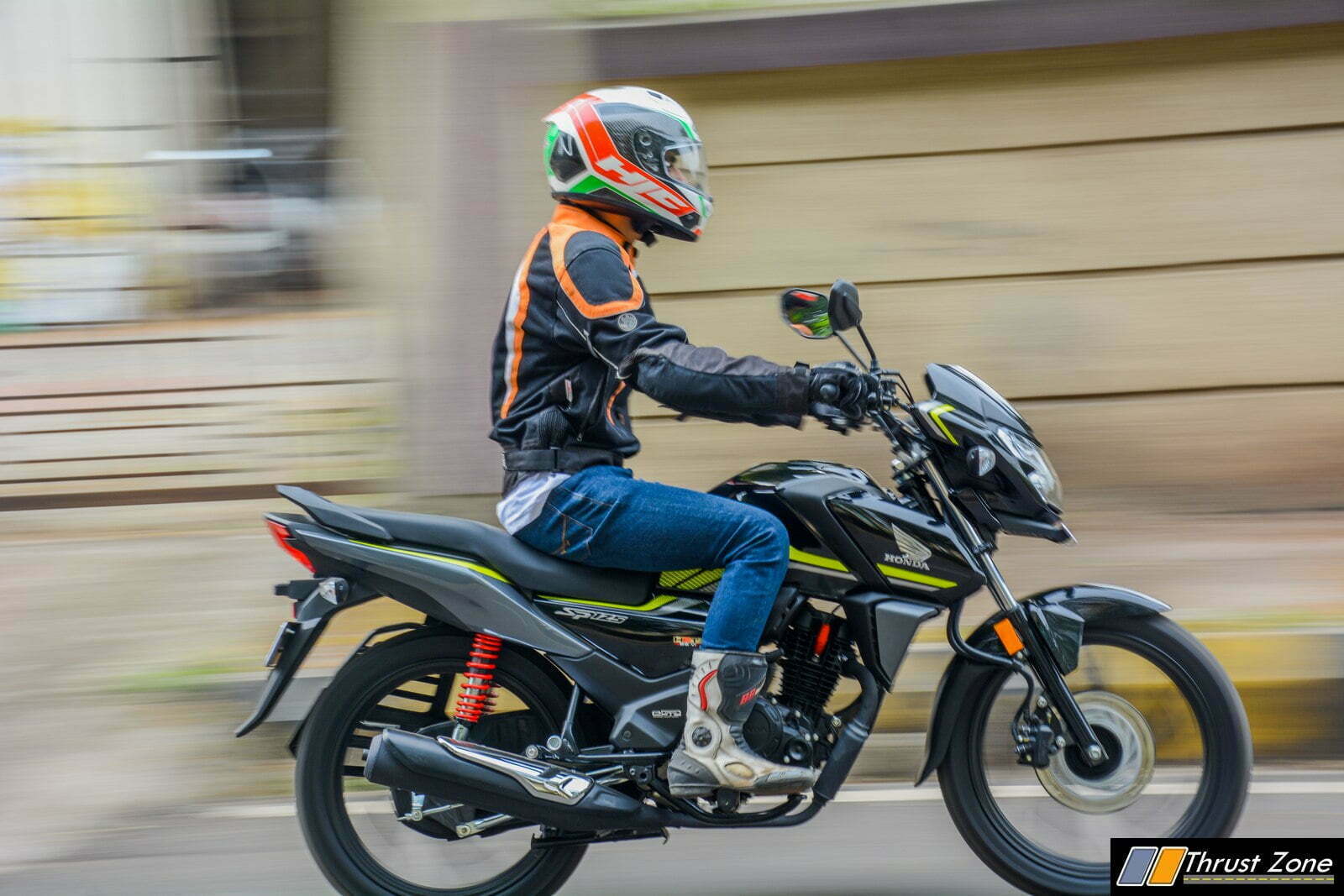 The test bike was equipped with a disc brake for the front and drum for the rear. Regardless of the brake set-up, the SP 125 comes standard with CBS (Combi Braking System). The CBS helps the bike slow down comparatively safer and in a shorter distance. This is done by a dual-channel connected to the brakes, when one of the brakes is put into use, the other brake comes into play automatically. The brakes not only have good fit and finish but also good bite to stop the bike just in time. 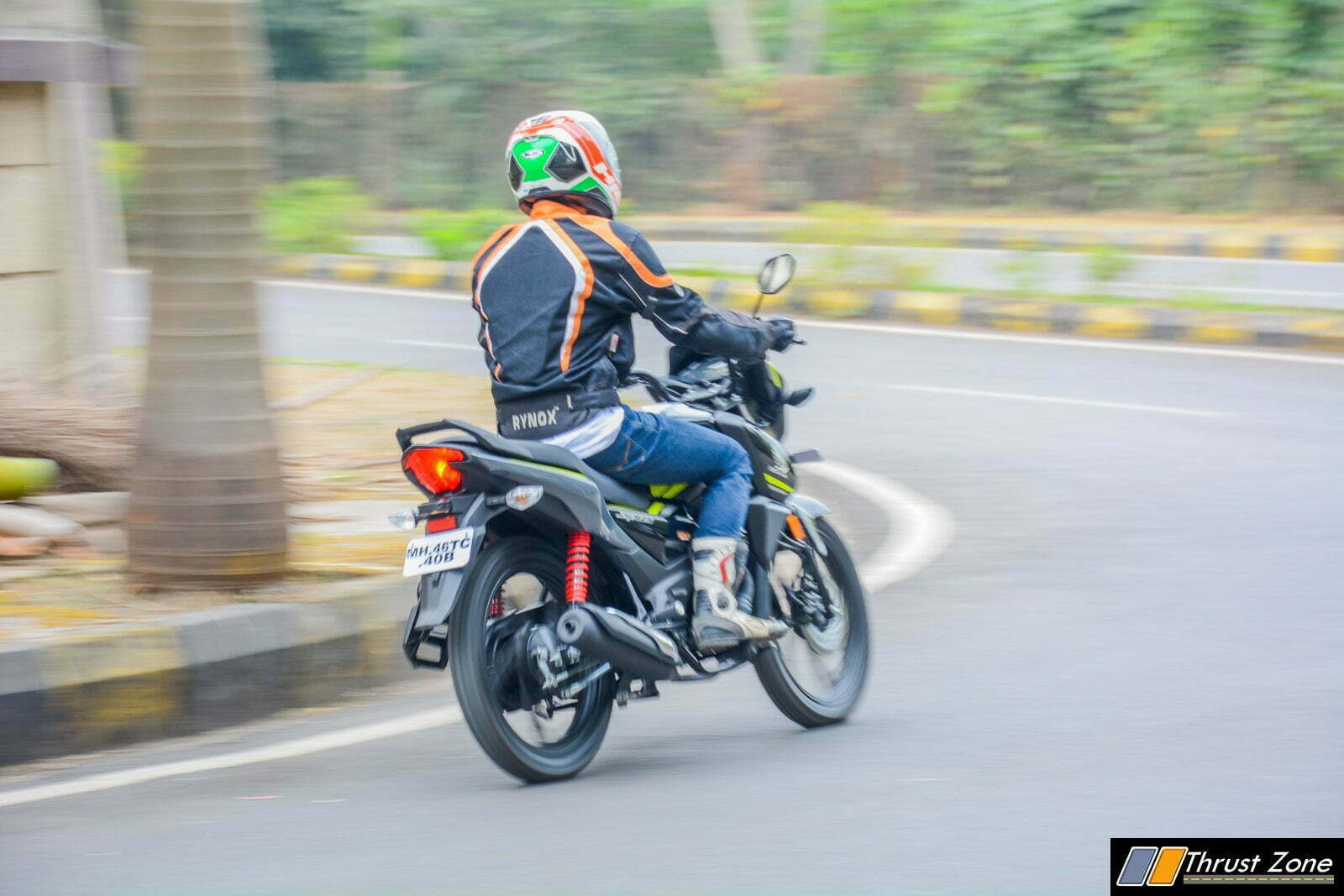 As mentioned before the build quality is up to Honda’s standards and the overall consistency among the panels and other cycle parts is equally good. With the 11 litres fuel tank and an average of 60 kmpl, fuel station visits would be less often. The 2020 Honda SP 125 comes with the kick start feature in case bad luck hits you and the battery runs out of charge. The ground clearance is adequate and not once did we scrape the bottom on the speed bumps. Now if I were to nit-pick, the bike misses out on a USB charging port option, but well there’s not much to complain about the SP 125. 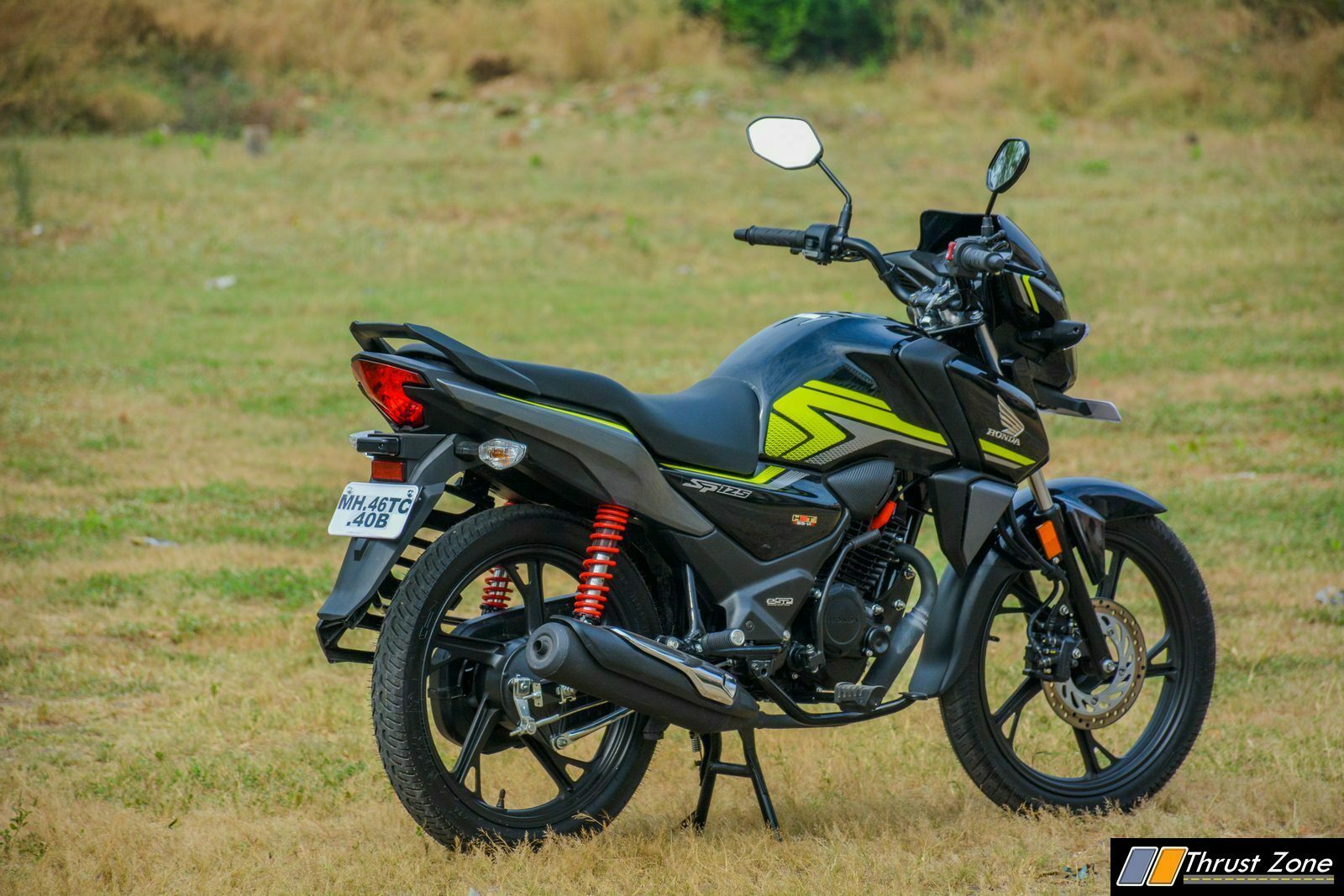 Honda has put up a competitive product out in the two-wheeler commuter segment. The SP 125 surely feels like the one well-settled, adequately rich in features, and promising motorcycle. With a price tag of Rs 78,272 (all prices ex-showroom), the bike offers a decent package overall and does everything a commuter is expected to do. Right from the visual appeal to the performance, Honda has ticked a lot of boxes and made the bike commendable.