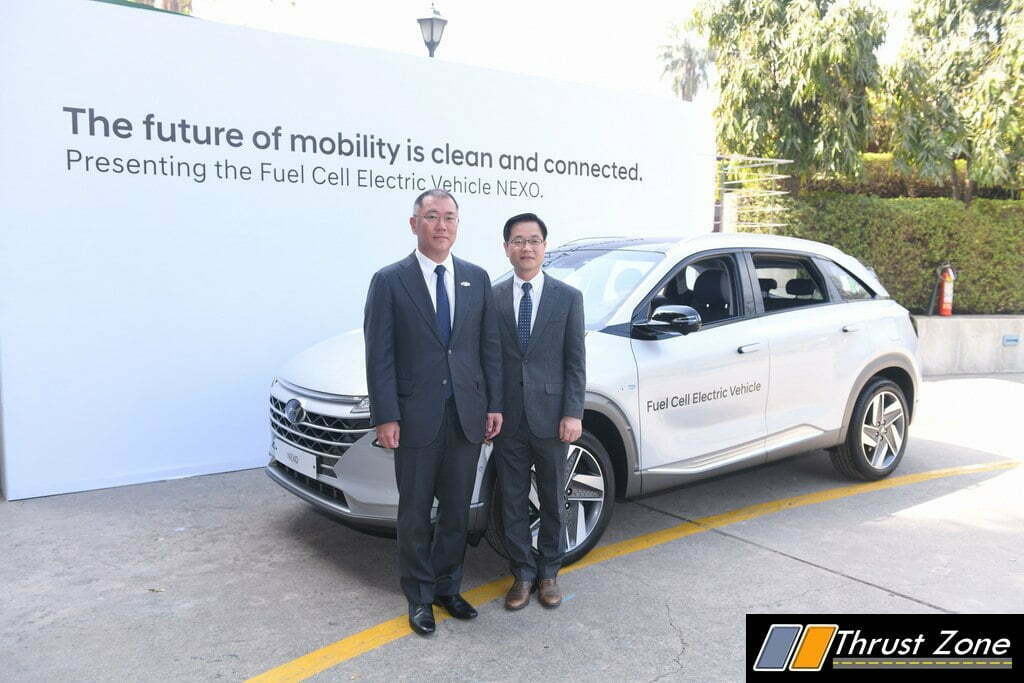 Hyundai Nexo and Kona SUV Showcased as it promises advanced electric and Fuel Cell mobility. 2020-22 launch on the cards.

Agree or not, but electric mobility is the future. In our EV article we stated that the Government will make electric only cars a compulsion and it will do it by 2030. Things have slightly taken a different turn now. The Government knows that it can open up other opportunities until all-electric mobility becomes a reality. Hyundai has jumped into action and after their highly anticipated Ionic Electric, the brand has unveiled the Nexo. Unlike the Ionic, the Nexo is a Fuel Cell Electric Vehicle (FCEV).

The car was showcased at New Delhi and is the first of the 18 eco-friendly models that Hyundai plans to launch across the Globe by 2025. The Nexo is powered via a hydrogen fuel cell and an electric motor working in tandem. The motor develops 163 PS of power and 395 Nm of torque. The inclusion of a fuel cell system and a lightweight structure equals better space on the inside and good performance too. The Nexo can travel upto 609 kilometers on a single tank of hydrogen.

Setting the bar high are features like semi-autonomous driving along with assist functions like Blind spot detection, Lane follow assist, Highway driving assist and remote smart parking assist. What’s all the more interesting is its air purification capacity, which filters 99.9 per cent of particulates in the air thus maintaining low pollution levels in the cabin.

If the Nexo seemed a bit too futuristic, Hyundai has something else in store too. It’s called the ‘Kona’. Recently unveiled, the Kona is another electric car from Hyundai. This electric SUV comes with a choice of two variants. A 39.2kWh battery variant which develops 135PS and has range of 300kms and a 64kWh battery variant which boasts of a 470km range and a power output of 204PS. The motor is common to both and its torque is identical to the Nexo at 395Nm. The top whack that the motor can achieve is 167kmph.

The two variants can be charged using a fast charger in under an hour. A normal AC charger would take around 6 hours for the smaller battery and around 8 hours and 40 minutes for the larger one. What spikes our interest is the construction of the car. Just like a monocoque construction, the battery of the Kona is integrated in the platform itself. This will free up more passenger and boot space making the Kona more practical.

Being a Hyundai it won’t fall short on features. It comes with top drawer stuff like Apple CarPlay, Android Auto, Navigation and Bluetooth along with live traffic information, wireless inductive charging and premium audio system. Also included are driver and safety assist features pretty similar to the ones on the Nexo.

The Nexo is still some time away from turning into a reality; the Kona however is close to becoming one. Hyundai hints at launching the Kona sometime in 2019. When launched, it will be great to see this EV SUV battle against its fossil fuel powered counterparts.