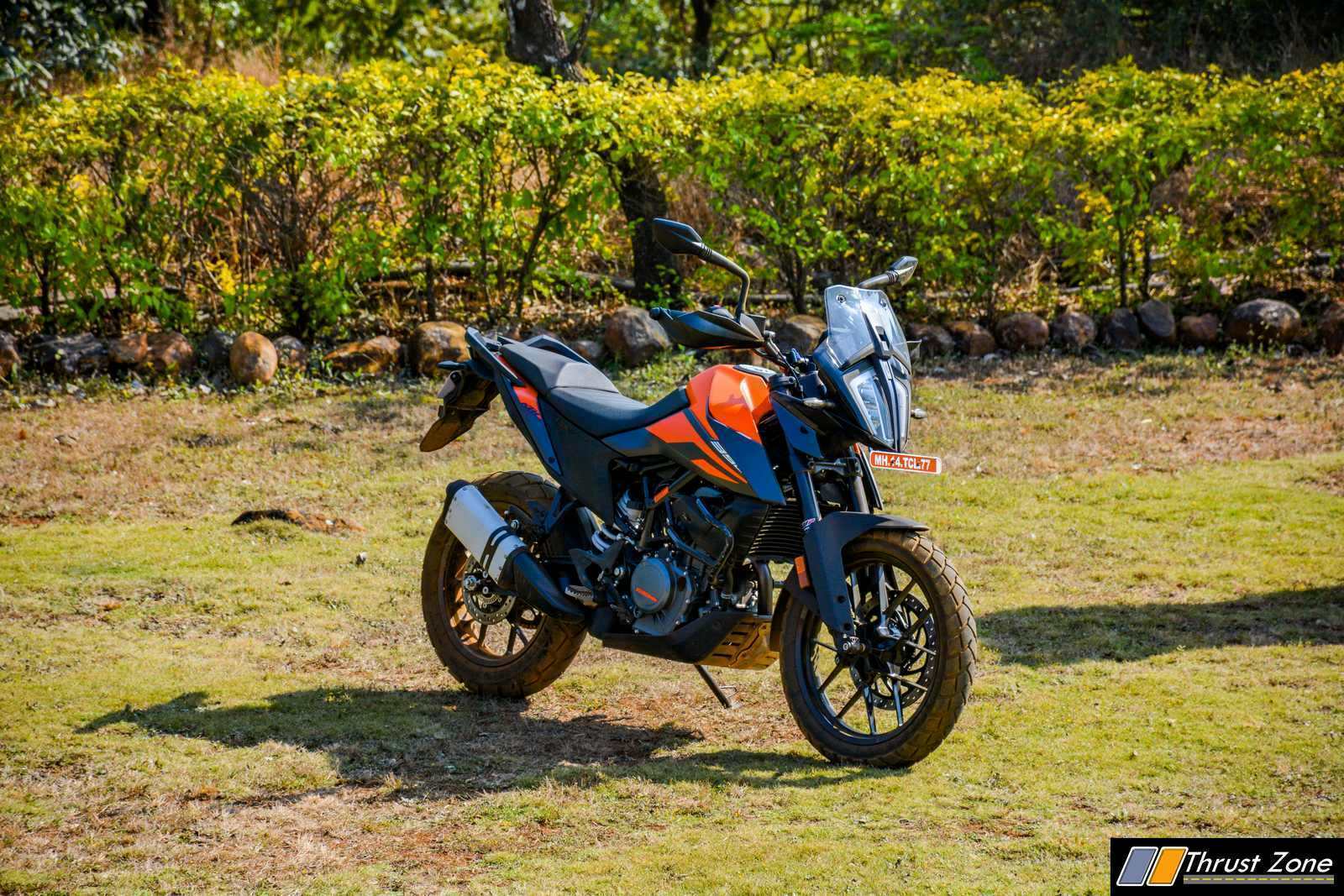 We are human beings and its nothing wrong if I said that we do carry preconceived notions. Now, it can be about anything and everything. Right from the food place that you might try to the new motorcycle that you are about to buy; we all have something or the other strongly held in our mind about it. And just like that, I too had some assumptions about KTM’s Adventure 390 before riding it. Now, to back up all the assumptions are the four years of owning a KTM 390 Duke. Make no mistake, KTM sells motorcycles that are affordable and not cheap. There’s a huge difference between cheap and affordable. KTM has moved volumes when you look at the Indian two-wheeler market and has possibly made a massive impact. 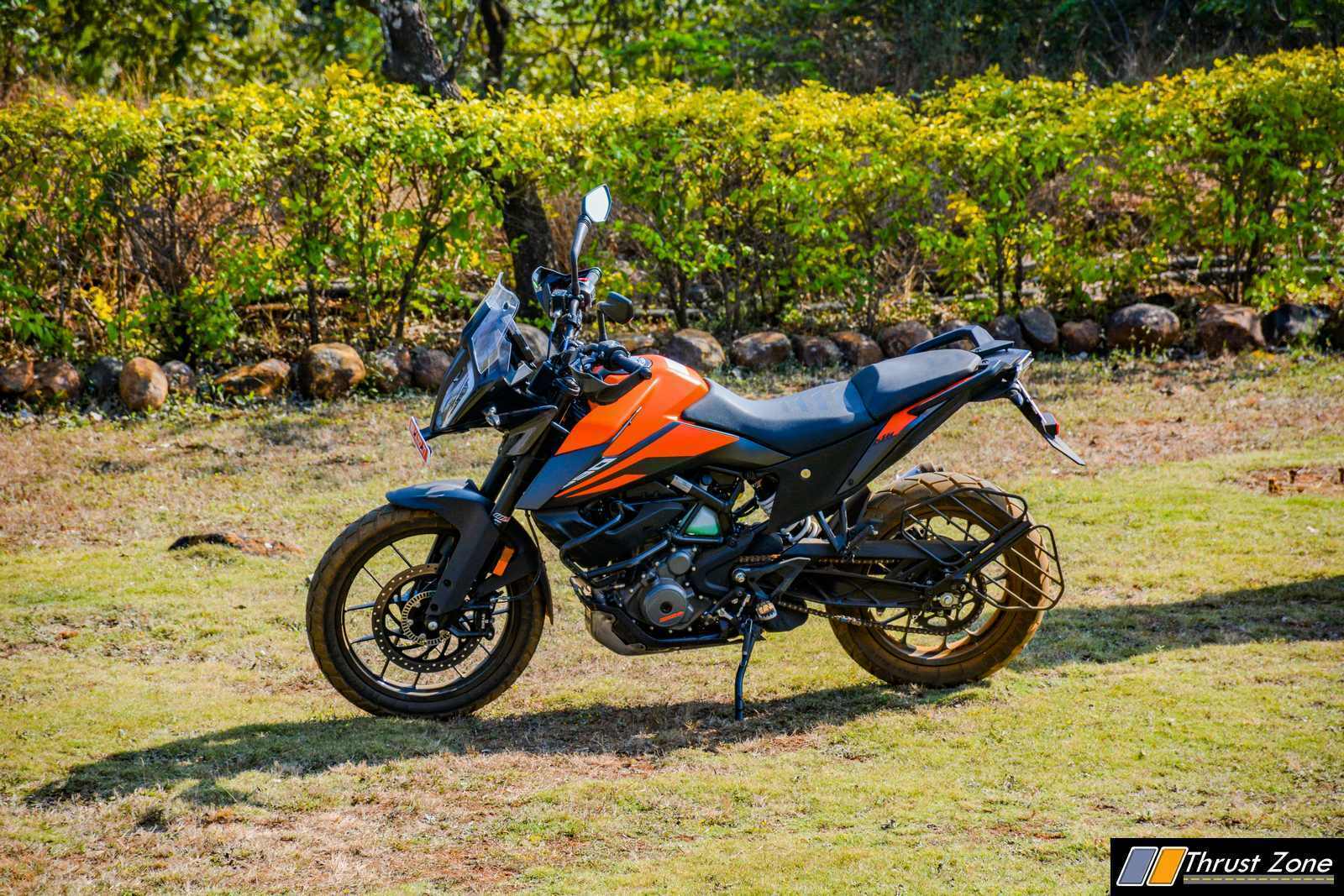 Getting back to the hot topic, the Adventure 390. We had our fair share and got to swing our legs over the Adventure 390. Results you may ask? Cleared the mind and dirtied ourselves, I mean with the mud and dust collected from the trail that we rode it over. Well, let’s go ahead and list out what exactly makes the Adventure 390 an ideal garage mate and what doesn’t. Any KTM motorcycle that you see, has to have the hereditary Orange theme and so does the Adventure 390. KTM says that the overall silhouette is inspired by the championship-winning KTM 450 Rally, and yes, we agree to it. 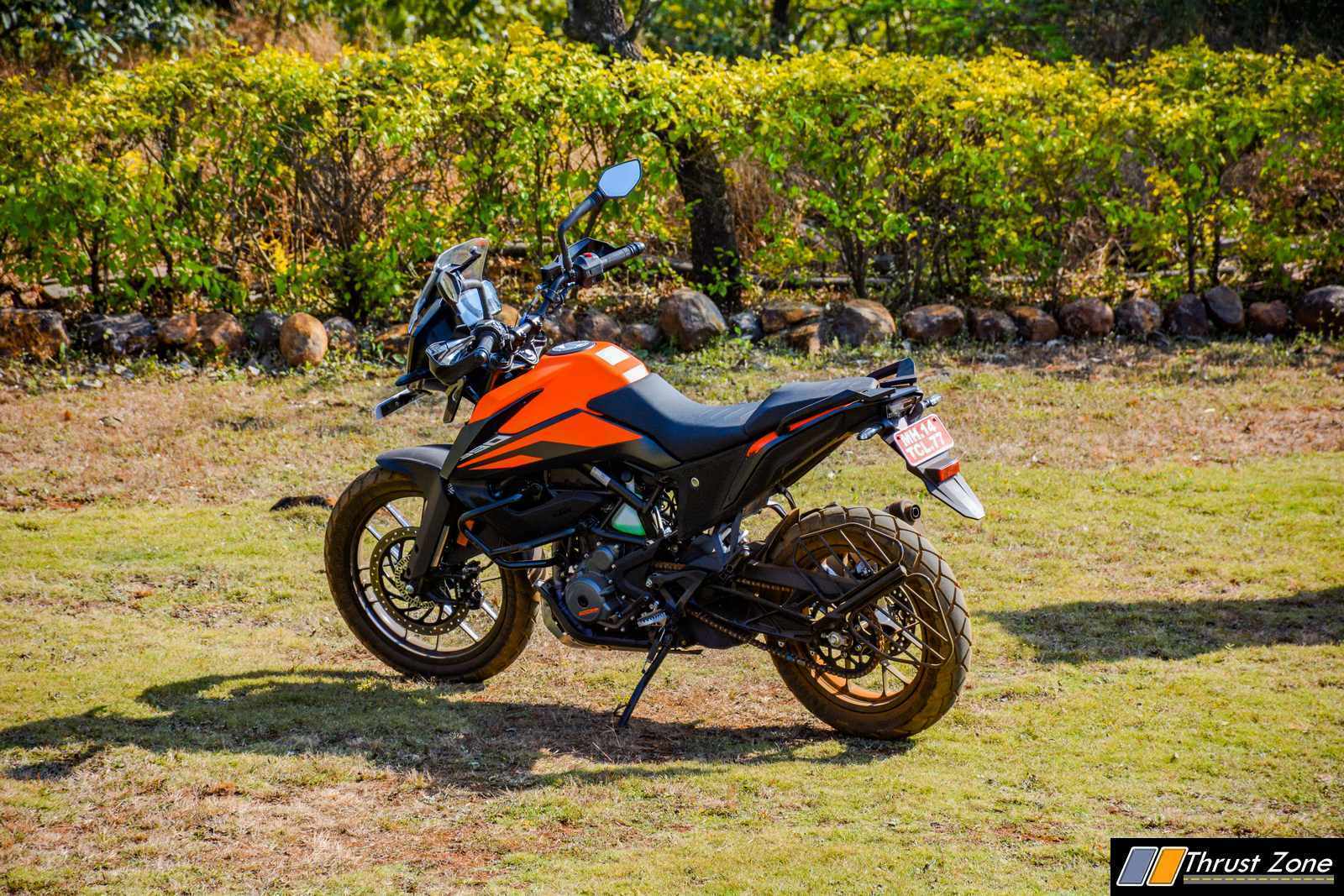 Now, these types of motorcycles, we are talking about Adventure-Tourers, are a completely different breed in themselves. Talking about the looks, they are a bit rough around the edges and not the most appealing if you see. That’s because here the motive is to encapsulate a very dynamic character even if that requires to go opposite from ‘form over function’. The Adventure 390 also features Bluetooth connectivity to connect a cell phone device for the purpose. What else you get is a 12v socket connection for your GPS/phone charger. 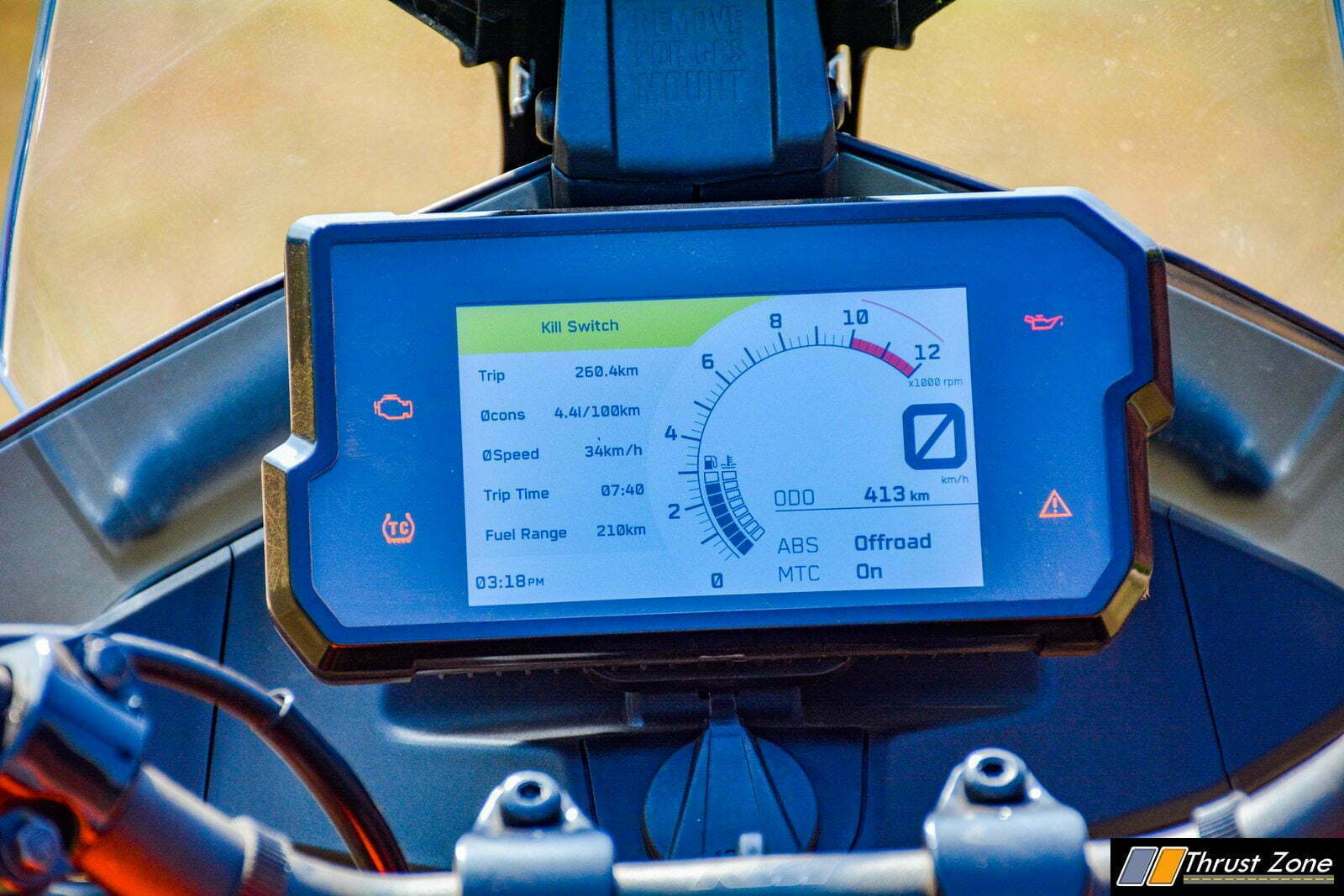 The front end is savoured with KTM’s current signature all-Led headlight unit flanked by LED turn indicators. The tail light is an all-LED unit as well. For now, the bike is available in two paint schemes. One is finished in satin Orange all over with Black body panels and the second paint scheme is White with Orange accents and Black body panels. 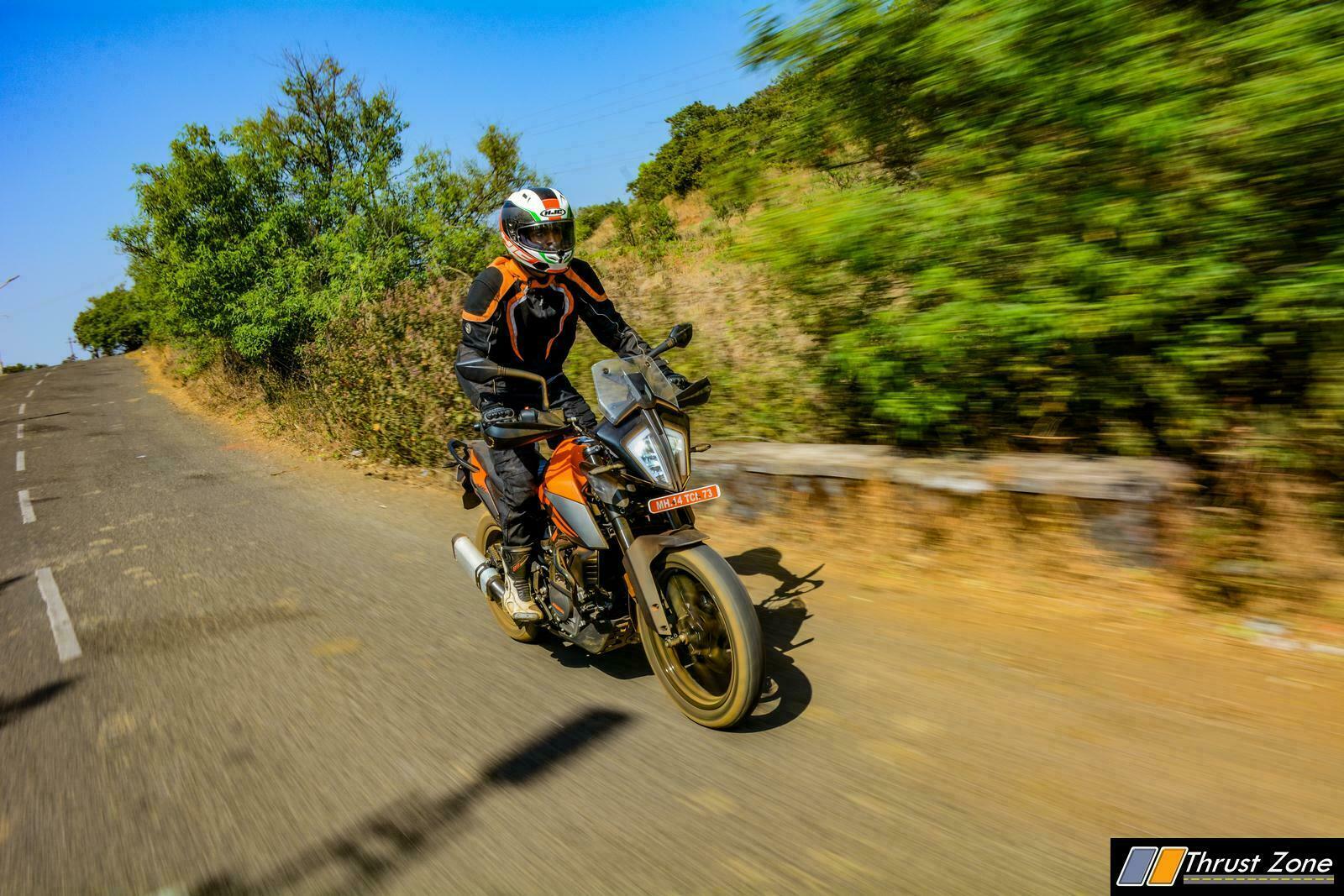 When you ride an adventure tourer on trails that you’ve never ridden before with stones bigger than your skull, you are bound to drop the bike at least once. Well, so happened with us, it’s just that the bikes were dropped more than once and the build quality was truly put to test. The stock crash guards did their job and kept the geometry of the bike intact. Not that the bike is unbreakable or such, we did break the clutch lever partially, but that was it. Apart from the media guys, there was one person with absolutely mind-numbing skills. KTM flew him to India from Australia, to show how trails are to be ridden. Folks, I’m talking about none other than Adam Riemann and if you don’t know him, please, Google! 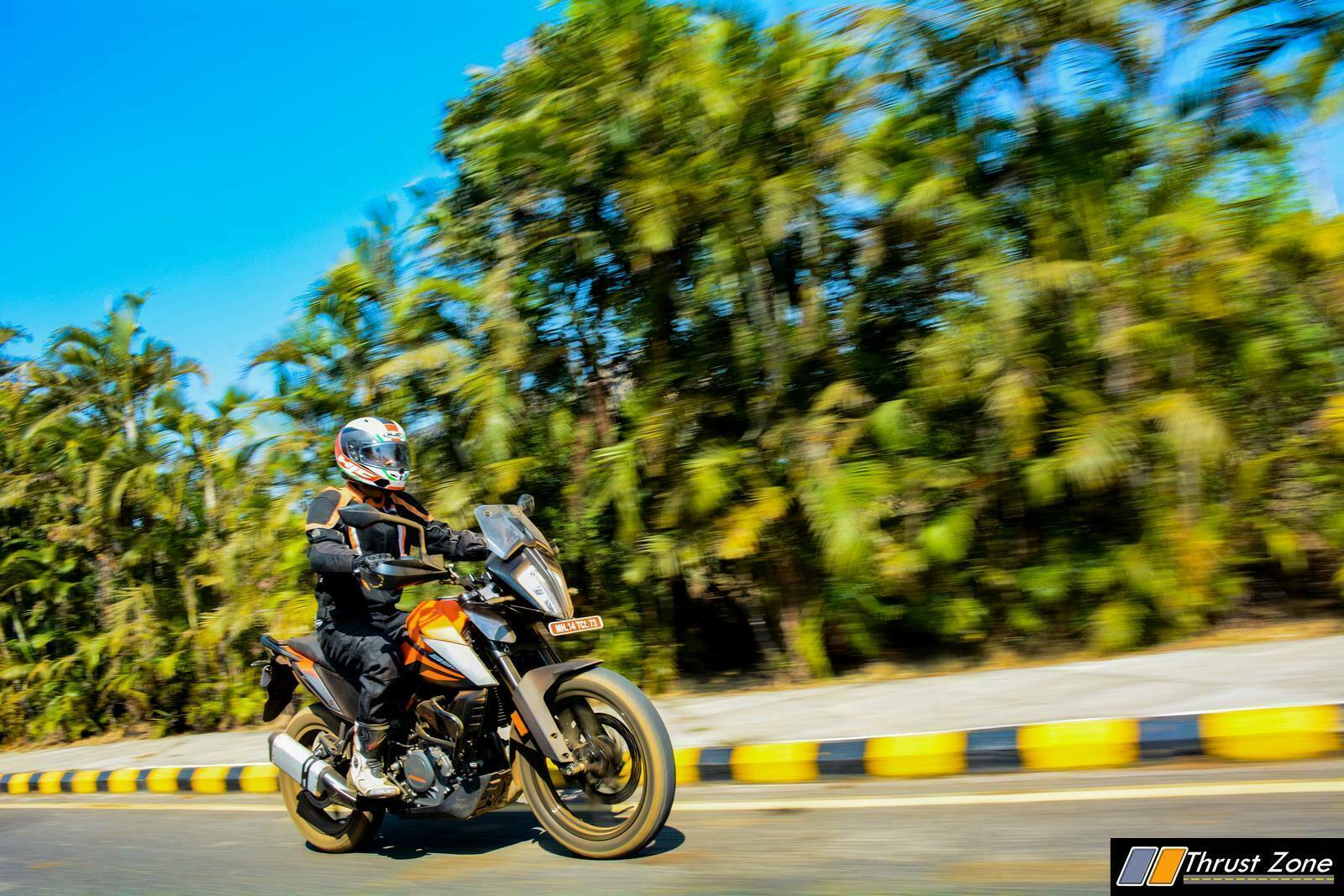 Adam was trashing the Adventure 390 like those teens trash their BMX bikes. Jumping over bumps, popping wheelies wherever he felt like, sliding, slipping, letting the rear go absolute bonkers. The bike seems like it is built like a tank and keeps going on-and-on regardless of the path. The switchgear quality as well is up to the standards and the buttons to toggle around the menu give a good and sturdy feel. None of the switches feel flimsy, even when you keep slamming on them in a hurry. The TFT display is poignant and the rider can easily read the information even while standing on the footpegs. What else has to get credits is the bash-plate down below. The belly took quite some beating while we rode over the rocks slamming it numerous times. But not once it left us worried, as the bash-plate did its job second to none. 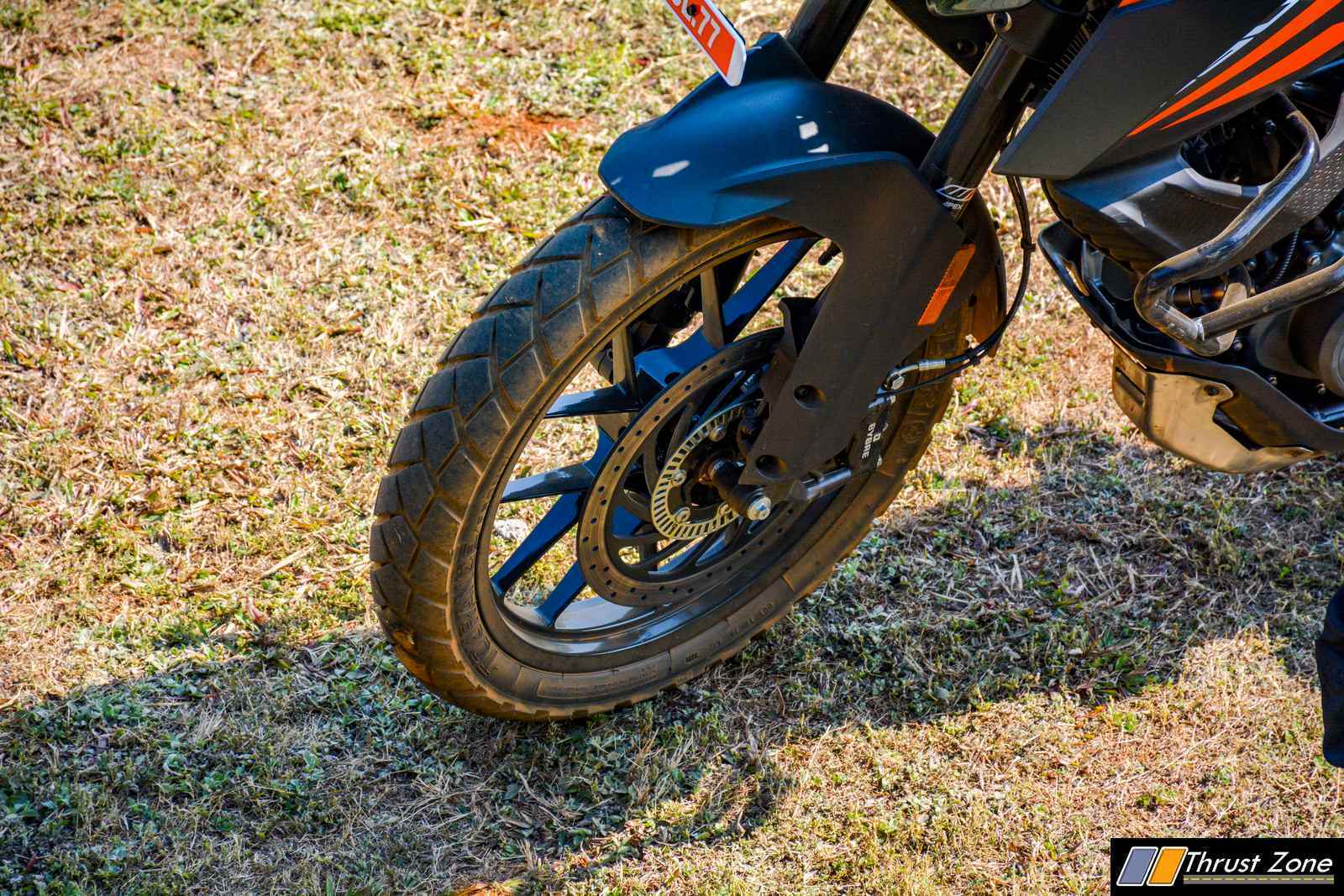 For our short stint of riding the KTM Adventure 390 over both, off-road and on-road, what we deduced is that the gearing is pretty long and you won’t have to fiddle with the cogs repeatedly. Off-road it needs a lot of clutch slipping as low-end torque isn’t instant below 3000 PM. It supports the character of the bike and makes the riding easier and a lot more fun. A good gearbox combined with a peppy engine is the perfect recipe for spirited riding. Topping that is the smooth throttle response and that you will find on the Adventure 390.

The power delivery is very linear and the torque is accessible throughout the rev band. There is decent low-end torque and mid-range and top-end torque is excellent as before when considering the 390 engine. The engine is surely rev-friendly and won’t mind cruising at triple-digit speeds either. Feedback from the motor is more than enough for you to not rev the life out of it. 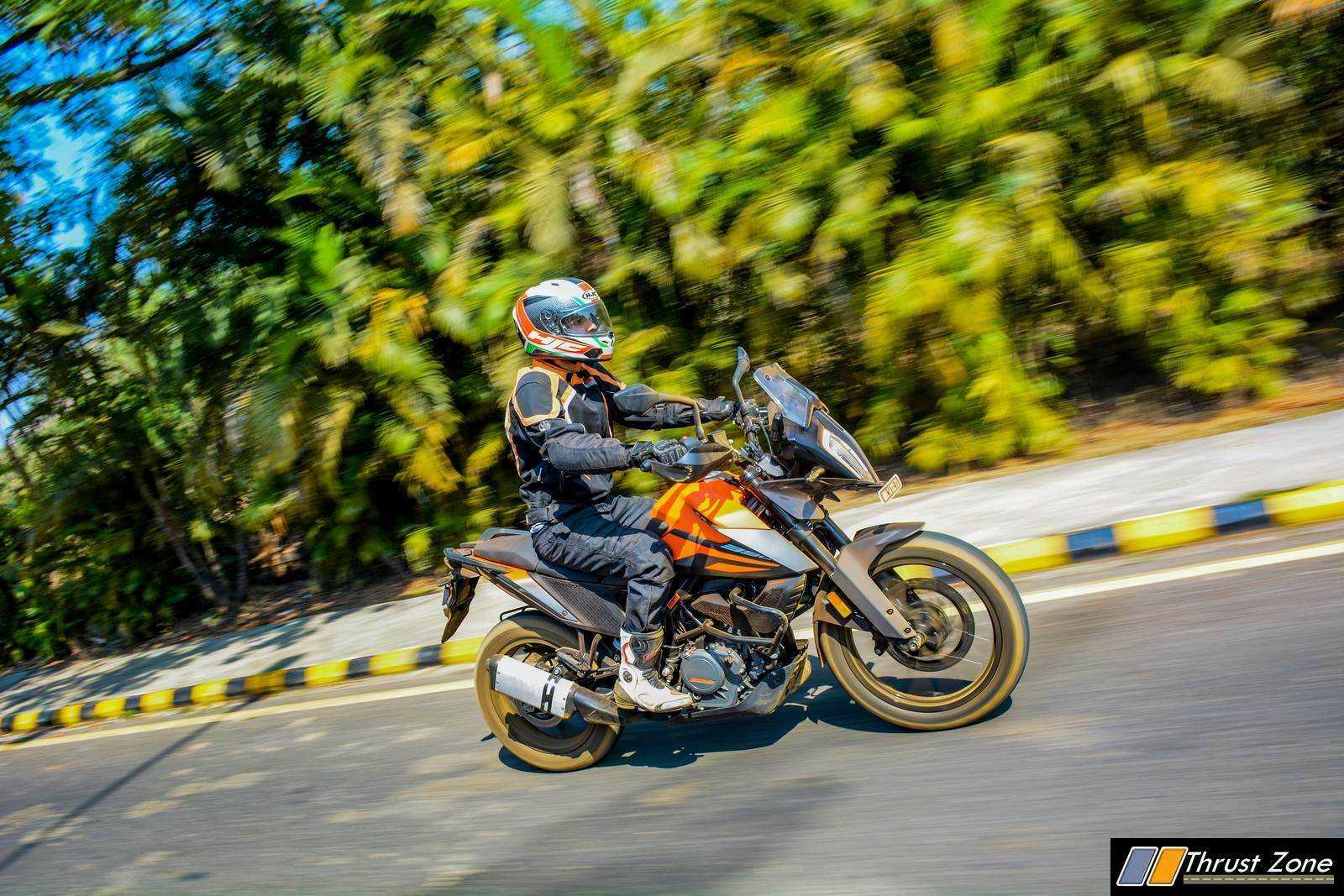 KTM has housed a single-cylinder, 373.2cc motor that pumps out 44 hp of max power at 9000 RPM and 37Nm of max torque at 7000 RPM. And boy, you can put all the horses down with just a whip of the throttle. The engine is mated to a 6-speed transmission that’s equally smooth. The electronics package requires separate attention and you will find all of it towards the end of this piece. 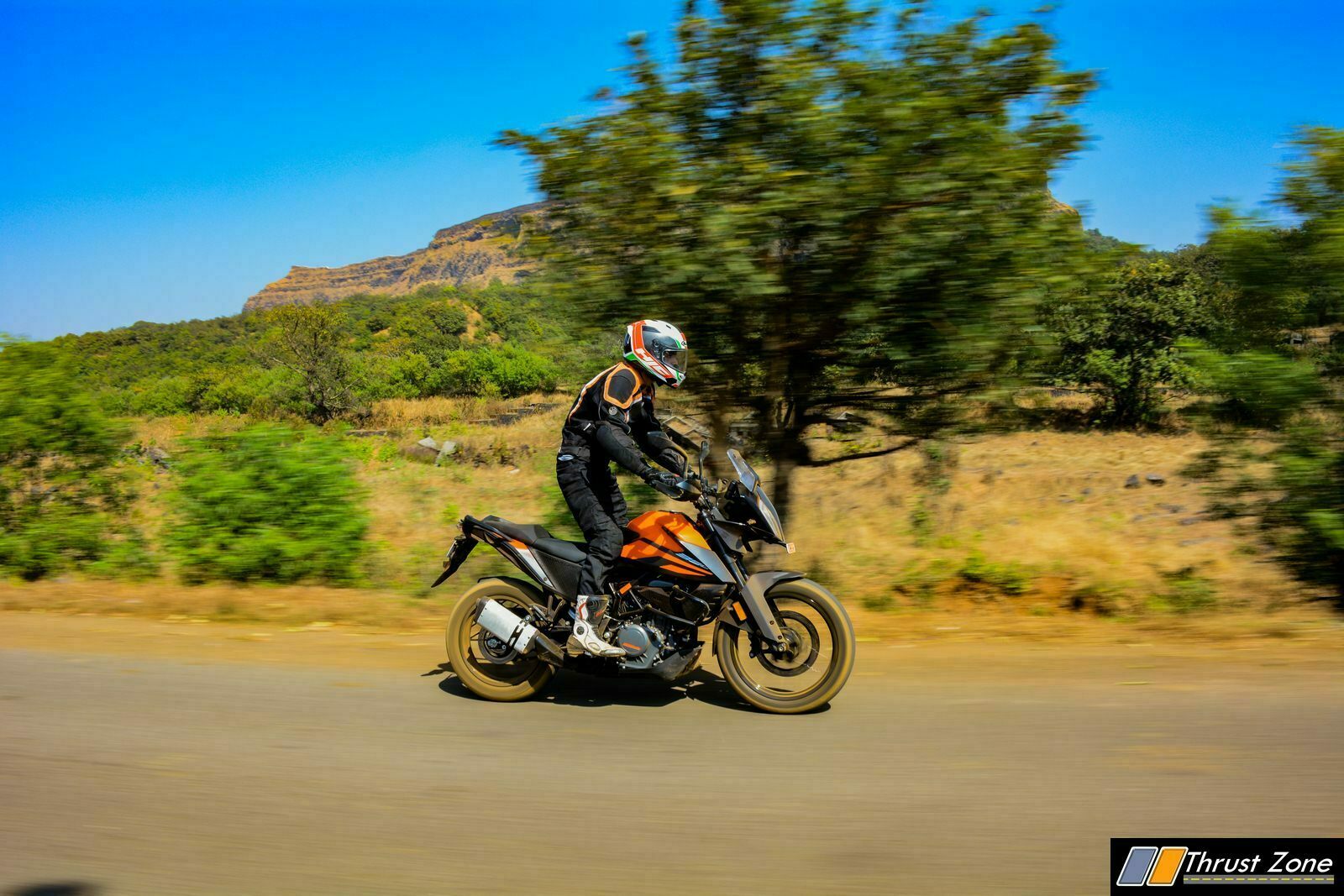 At the front is are the WP Apex 43mm Upside down forks and at the rear we have WP Apex Shock Absorber. The stock suspension tuning is just fine although KTM decided to go with the non-adjustable set up to keep the pricing sharp enough. No doubt, the Adventure 390 truly shines when off-roading but that shouldn’t let one question its road riding capacity. Small bumps, pot-holes? No biggie for the Adventure 390. Now, you’d expect a bike of this character to be equipped with spoked wheels, but not here. KTM has shoed a pair of alloy wheels to Metzeler’s Tourance, dual-purpose tyres. At the front is a 19-inch alloy and the rear gets a 17-inch wheel. Oh, did I mention that even after 3 days of being ridden at the rocky trail, not one bike had cracked alloys? Courtesy to the Cast Aluminium as well as high sidewalls of the tyres. 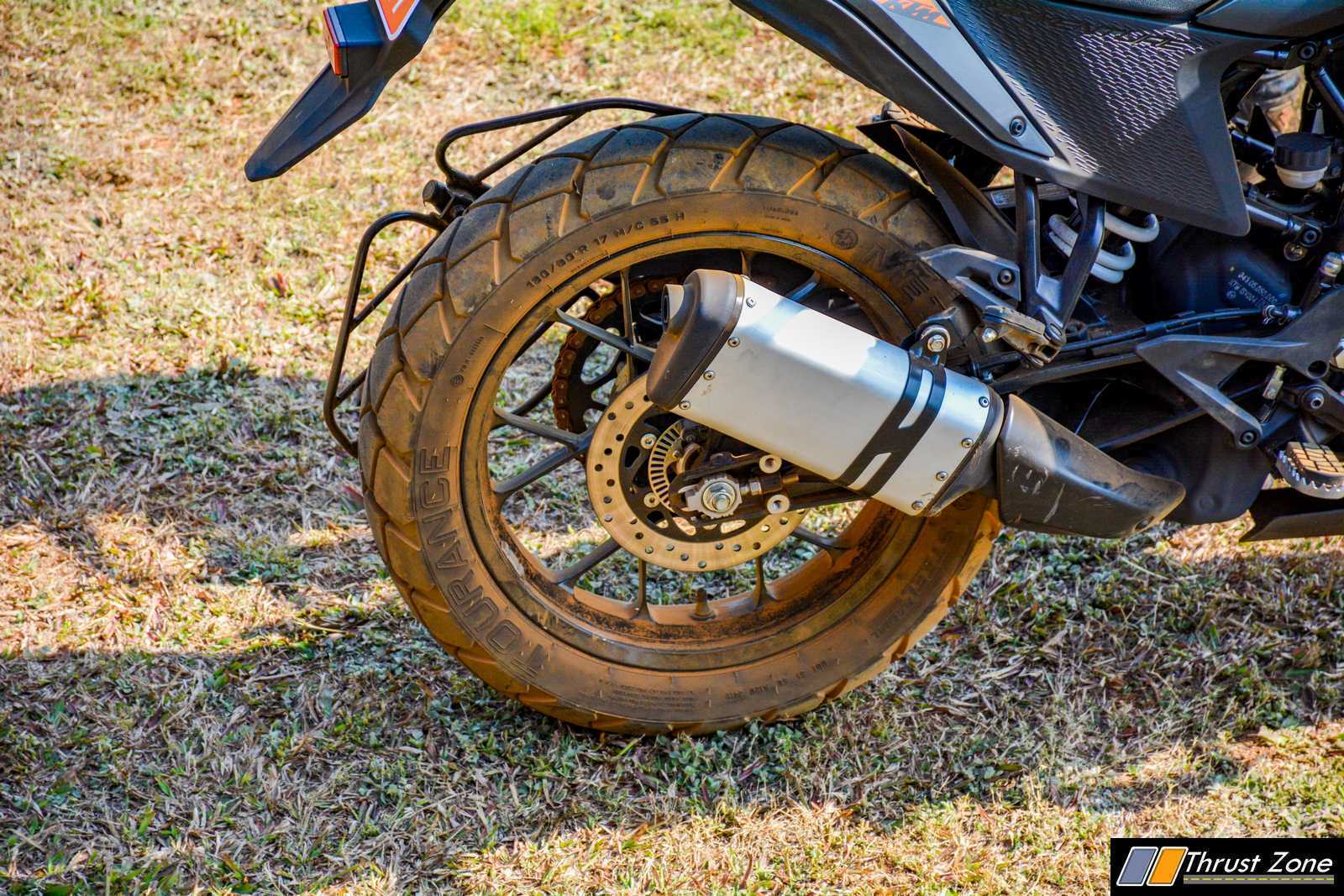 Braking duties are done by ByBre. A 320mm disc brake at the front and 230mm at the rear. Goes without saying, dual-channel ABS is standard and for all those who would like to know, the ABS unit is from none other than Bosche. Electronics, it was only right to keep a separate part for the electronics on offer with the KTM Adventure 390. The bike comes stock with ride-by-wire, cornering ABS that can be switched off completely while off-roading, MTC or rather say Motorcycle Traction Control, Quickshifter and Autoblipper, and all of this can be operated with just a tap on the switches on the left-hand side. 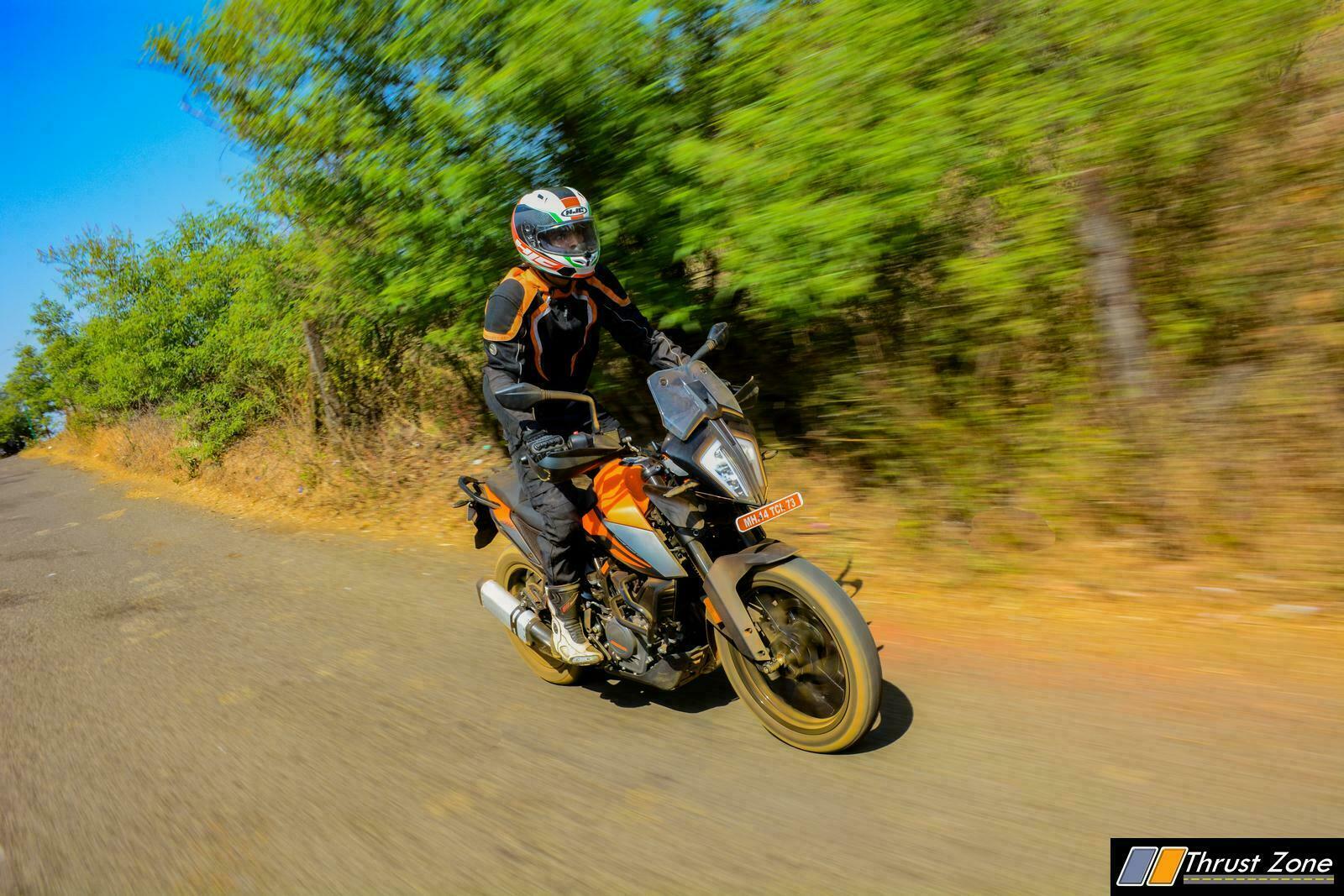 The Adventure 390 surely looks rugged and stands adequately tall with a seat height of 855mm. But once you hop on the bike, it doesn’t feel all that intimidating. Even with a kerb weight of 177 kg, the Adventure 390 won’t make you reconsider a gym membership. Flicking it around and changing direction won’t necessarily leave you in sweat either. From asphalt to off-road, the bike adopts it’s surrounding impressively well. 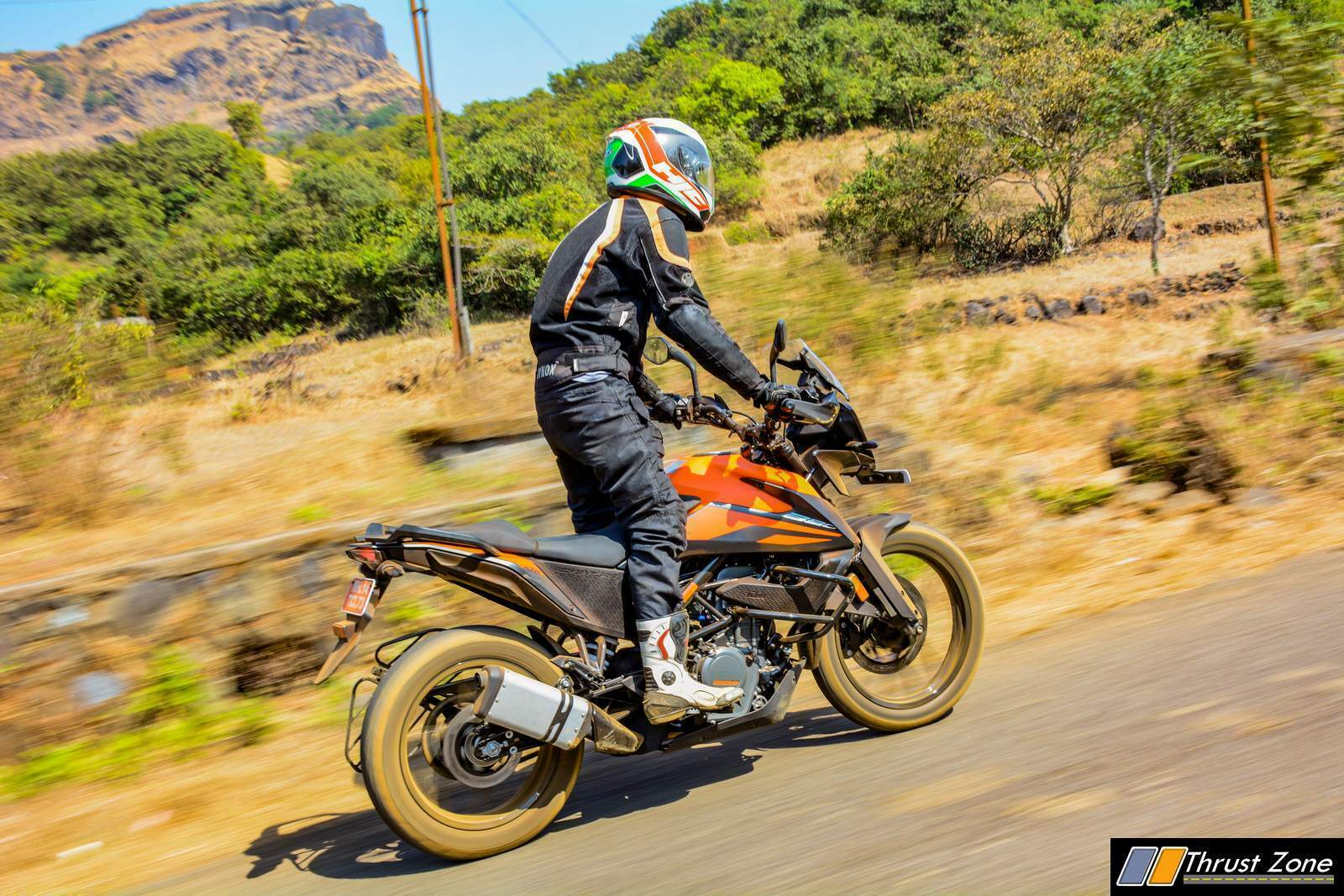 We had a lot of fun turning the traction completely off and letting the rear fishtail while gassing out aggressively. As mentioned earlier, the throttle response is darn smooth, courtesy the ride-by-wire. Not nitpicking here, but at times, the Quickshifter and the MTC have a mind of their own. While testing on road, the Quickshifter refrained from engaging for more than a couple of times.

Talking about the MTC, it is justified for the traction control to go back into default settings whenever you stall the bike or kill the engine. But instead, the MTC stayed on and off at times, even after firing up the bike after stalling. So that leaves you with the only option of staying on the MTC option menu while riding off-road. This will help you turn off the traction control in case you stall the bike at any point in time. 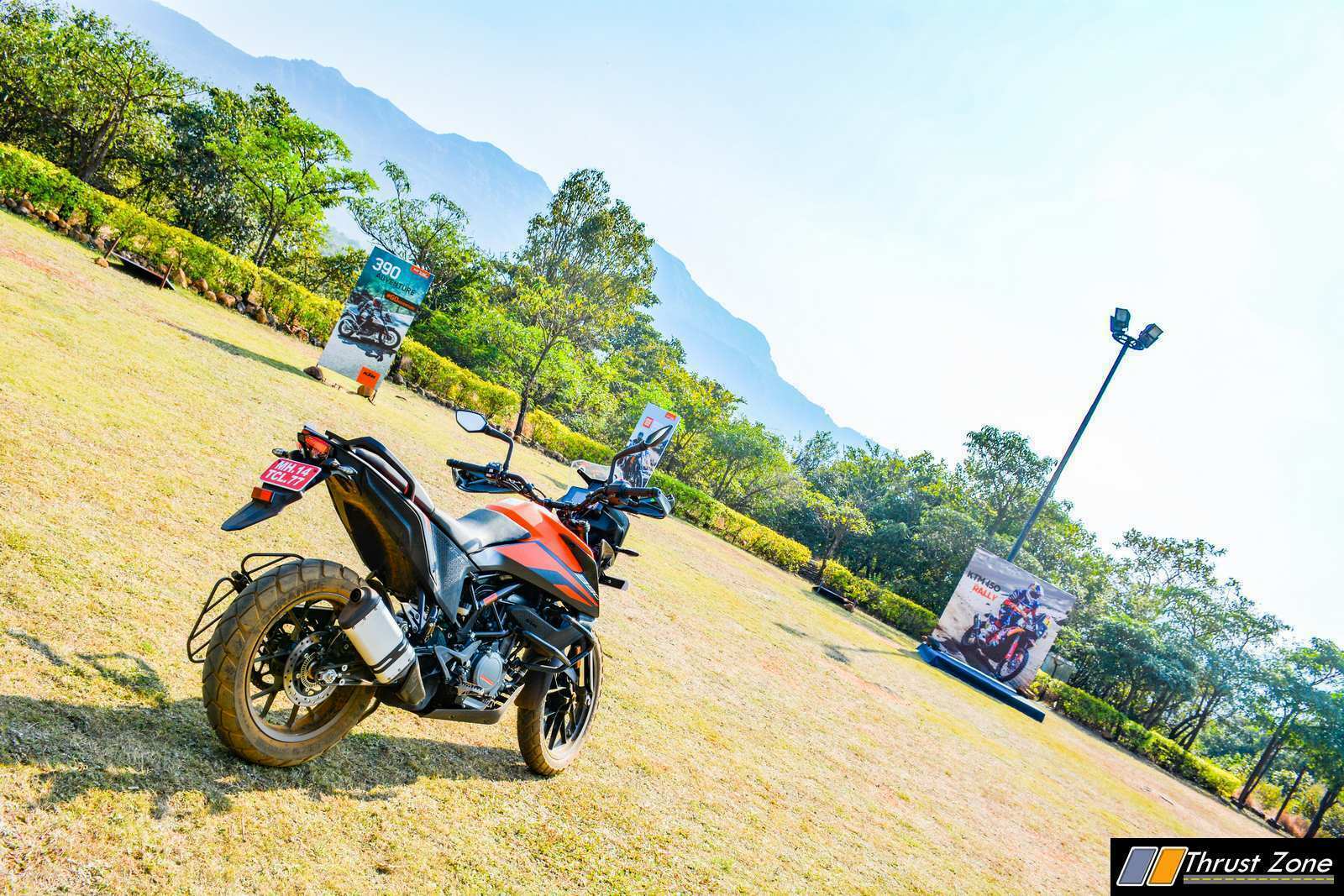 At a price tag of Rs 2.99 lakh (ex-showroom), KTM has offered quite a bit and considering its aftersales services and spare part availability the Adventure 390 seems to be a promising motorcycle. Not to forget, with a fuel tank capacity of 14.5 litres and average fuel economy between 30 to 37 kmpl, the fuel stops will surely be cut down. Lastly, the KTM 390 Adventure has come here to stay at Rs 2.99 lakhs and it will provide everything an Indian motorcycle enthusiast ever needed. Our road test will say more about the same, stay tuned.

Baja SAE 2020 Concludes With Much Excitement and Fan Fare