Mercedes have reveled stunning details about their AMG project one Hypercar, and we bet you don’t want to miss out on this one

Mercedes Benz and its AMG performance division unveiled their all new astonishing Project One Hybrid hypercar at the Frankfurt Motor Show 2017. The Mercedes Project One is one very special car. The project one is total mechanical brilliance. The new hypercar packs staggering 1000 bhp and weighs 1000 kg giving it 1:1 power to weight ratio. Power comes from four electric motors and a 1.6-litre V6 turbo engine. With around 750 hp coming from the 1.6-litre turbocharged V6 engine which can rev up to 11,000 rpm. The rest of the power comes from the electric drive system.

The first electric motor is connected to the engine via the crankshaft at the rear of the vehicle and powers the rear wheels. The second motor is integrated with the turbocharger to help spin the compressor. The third and fourth electric motors are in the front axle and give the Project One Vehicle all-wheel drive.

The Mercedes AMG Project One is as close to as the Formula 1 car on the road than any other car in production today and features the same V6 engine found on the Mercedes AMG F1 championship winning race cars. The hypercar is the most ambitious project undertaken by the company. It marks yet another pinnacle of the successful, strategic development of Mercedes AMG towards a performance and sports car brand. Project one raises the bar in terms of what is currently technologically feasible and thanks to its combination of efficiency and performance which represents an absolute benchmark. 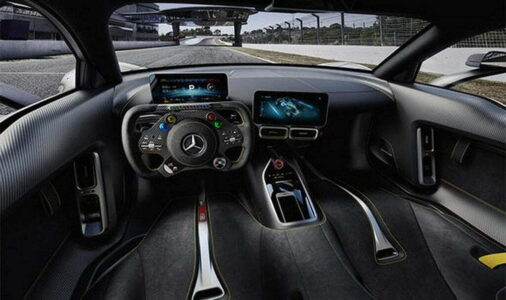 The engine’s crankshaft is attached to an electric motor that can virtually eliminate turbo lag while generating electricity by harnessing the engine’s kinetic energy. In Formula 1 circles, this electric motor is called the Motor generator, Unit Kinetic or MGU-K. The engine and this motor duo drive the rear wheels while producing more than 670 bhp. The engine also features a split turbocharger design that keeps the hot exhaust gasses that power the turbo away from the compressor, thereby leading to more power through cooler and denser air being fed into the engine. 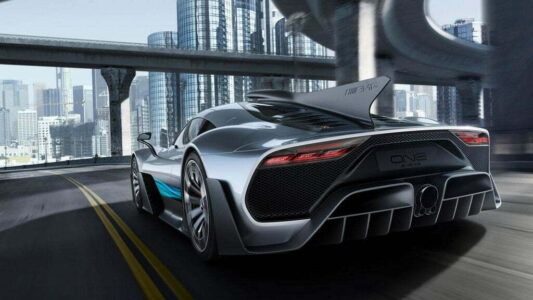 Well that’s a lot of mechanical stats, but trust us driving this wont be that complicated. It doesn’t happen very often that a company decides to put a F1 powertrain into a street legal car and at the same time , Mercedes AMG Project One provides an outlook on how AMG will define driving performance in the future. As the boss man stated the Project One sits above all and is really something special, something that will be special 50 years from now.