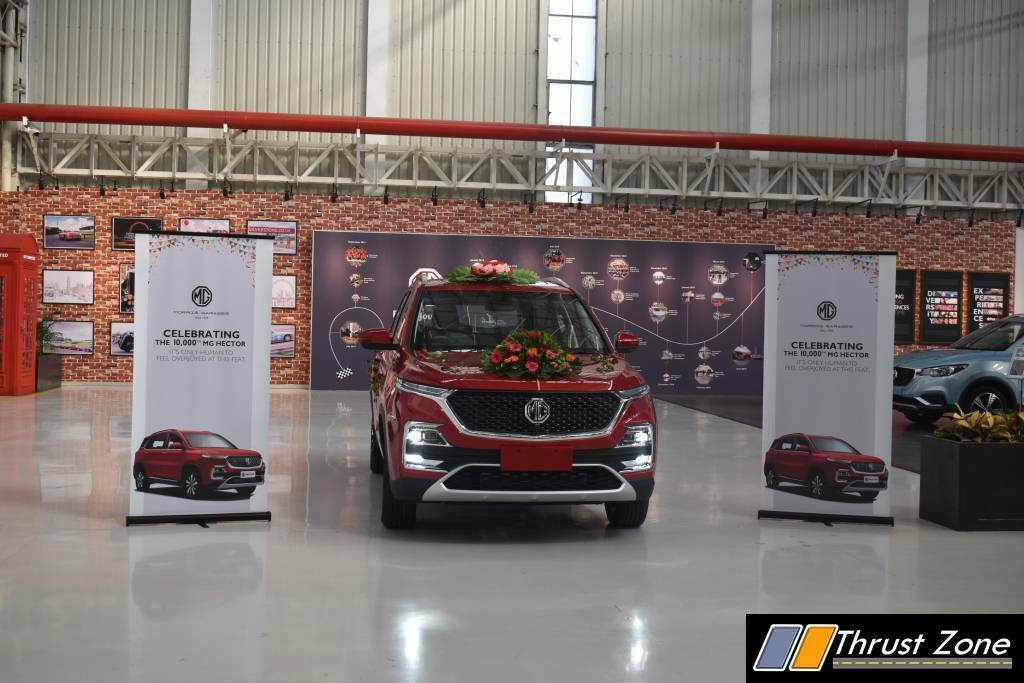 Underlining another milestone in its journey, MG Motor India has manufactured 10,000 units of the HECTOR, its debut offering in India, at its Halol manufacturing plant. The landmark has been achieved within just four months of the Hector’s launch in the country.

The carmaker plans to ramp up its production for its second shift beginning in November this year, in line with the increased component supply from its global and local vendors. It has received an overwhelming response for the MG HECTOR with bookings of over 38,000 units. 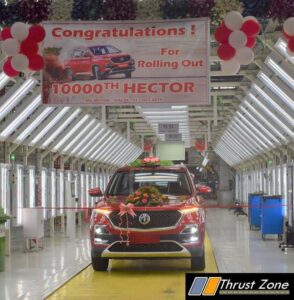 “With the re-opening of bookings, the MG HECTOR has further gained momentum as the most compelling proposition in the SUV-C segment. Our endeavour is to ensure customer satisfaction through timely vehicle deliveries in the coming months,” said Rajeev Chaba, President & Managing Director, MG Motor India. The carmaker has recently re-opened bookings of the MG HECTOR, India’s first internet car, on September 29, 2019.

MG Motor India today also announced that it has delivered a record 700 units of the MG HECTOR on the auspicious occasion of Dhanteras.

To mark the occasion, MG organised various vehicle delivery events across India to congratulate its customers and thank them for their contribution towards girl child education. As part of its association with IIMPACT NGO, the carmaker had earlier announced that it will sponsor the education of one girl child for every MG HECTOR sold in the country.

Making the festive season extra special for its Delhi-NCR customers, the carmaker delivered nearly 200 cars from a single point, marking one of the largest vehicle delivery events on Dhanteras.

Speaking on the occasion, Rakesh Sidana, Director – Sales, MG Motor India, said, “Customers and community are at the core of everything that we, at MG Motor India, do. Our latest round of HECTOR deliveries – one of the highest in a single day, underlines our commitment to facilitating best-in-class experiences for our customers. Our partnership with IIMPACT enables HECTOR owners to contribute to a social cause as well.”

MG Motor India has received an overwhelming response of MG HECTOR with over 38,000 bookings. It recently celebrated another milestone by rolling out the 10,000th unit of the model from its Halol plant.

As part of its commitment to customer satisfaction, the carmaker aims to ensure timely vehicle deliveries to its customers. With plans to ramp up its production with its second shift beginning in November this year, in line with the increased component supply from its global and local vendors.

The HECTOR’s 1.5-litre turbocharged petrol engine delivers 143 PS power at a peak torque of 250 Nm while the 2.0-litre turbocharged diesel engine will deliver 170 PS at a peak torque of 350 Nm. It comes with best-in-class fuel efficiency for both petrol and diesel with the Petrol Hybrid MT returning 15.81 km/l and diesel 17.41 km/l, as per ARAI.
The MG HECTOR has been tested for over one million kilometers in India before entering production and comes with 25 safety features as standard, making it one of the safest SUVs on sale today. ‘