Michelin Uptis is revolutionary if things end up right

It’s been decades since we’ve been witnessing the use of rubber tyres in the automotive industry, it’s highlights and challenges that are served complimentary with it.From selecting the right tyre, to worrying about it’s wear and tear, maintaining the right air pressure, etc. There’s a lot that comes with it. Reports say that every year around 200 Million tyres are scraped early due to damage. The damage can be cause by various reasons, excess punctures, damaged sidewall, uneven wear out etc. But future beholds a change. A change if not radical then for sure appreciable.

Michelin and GM have aimed to give the world an airless tyre by the year 2024, oh by this we don’t mean going back in the past and using the wooden wheels of a bullock cart. But what we are talking about is called Uptis. An airless tyre with leagues above in terms of benefits over radial tyres.

Michelin Uptis stands for “Unique Puncture-proof tyre system” and will be first debuting on a Chevrolet Bolt Electric car. GM has scheduled it’s real world testing later this year on fleet of Bolt Evs in Michigan with an intent of eliminating the regular tyre and wheel with a full assembly for passenger vehicles.

Airless tyre rigs out a number of issues and serves equal benefits if not more to both, the planet and the vehicle. From worrying about uneven wear and tear to punctures, early scraping due to damage, over and under inflation, sudden blowouts, and most important, less raw material and efforts in the making. This isn’t the first attempt of making an airless tyre, back in 2005 Michelin announced Tweel system and Uptis is a production ready version of the same. Difference being, Tweel has been used only in non-passenger vehicles, construction vehicles and other machinery. 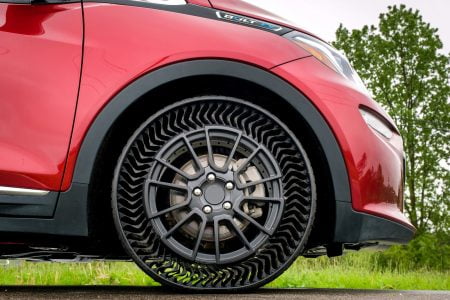 Now with the change of material there are a few questions to be noted, these are in regards of the weight, on-road feedback, cost, etc. Michelin has checked most of them just right. Talking about the weight, Michelin Uptis seems to weigh about 22.5 kilogrammes and that’s between the heft of a regular tyre and one which has gone flat.

Michelin Uptis has an upper hand by eliminating the need of a spare wheel thereby shredding some more load from your vehicle. Feedback to the driver seems to be little or not all compromised. The availability of Uptis seems to be bent more over towards the rental fleets, shared vehicles indicating that it’s not aimed to average consumer needs for the beginning. There’s no thorough data on the pricing and range of vehicles it can be equipped with, yet.