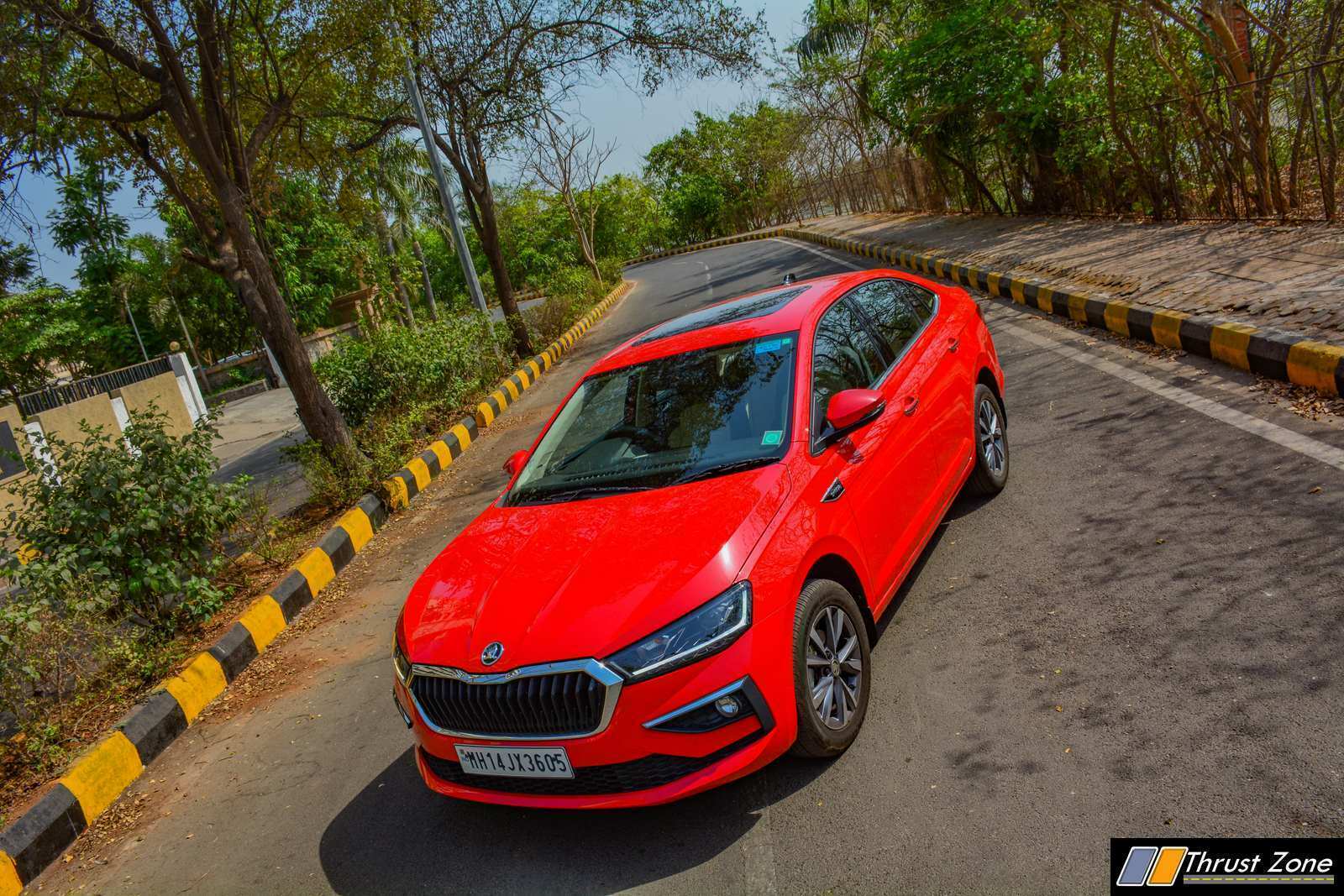 The sedan market was interesting till the point when the Slavia was launched. As of writing this report, which is a bit late, things have changed. The Superb and Octavia are going out of production for a very long duration of time and the other sedans from rivals are also set to come in shortly from rivals such as Hyundai and Maruti. Honda also launched its Honda City hybrid to make it mark again. With the entrance of the Slavia and its cousin, the segment has been rebooted. How good is the Slavia that it can capture the hearts and minds of the sedan lover who thinks SUV’s are the future and present. We found as we spend time with the 1.0l variants of the sedan. 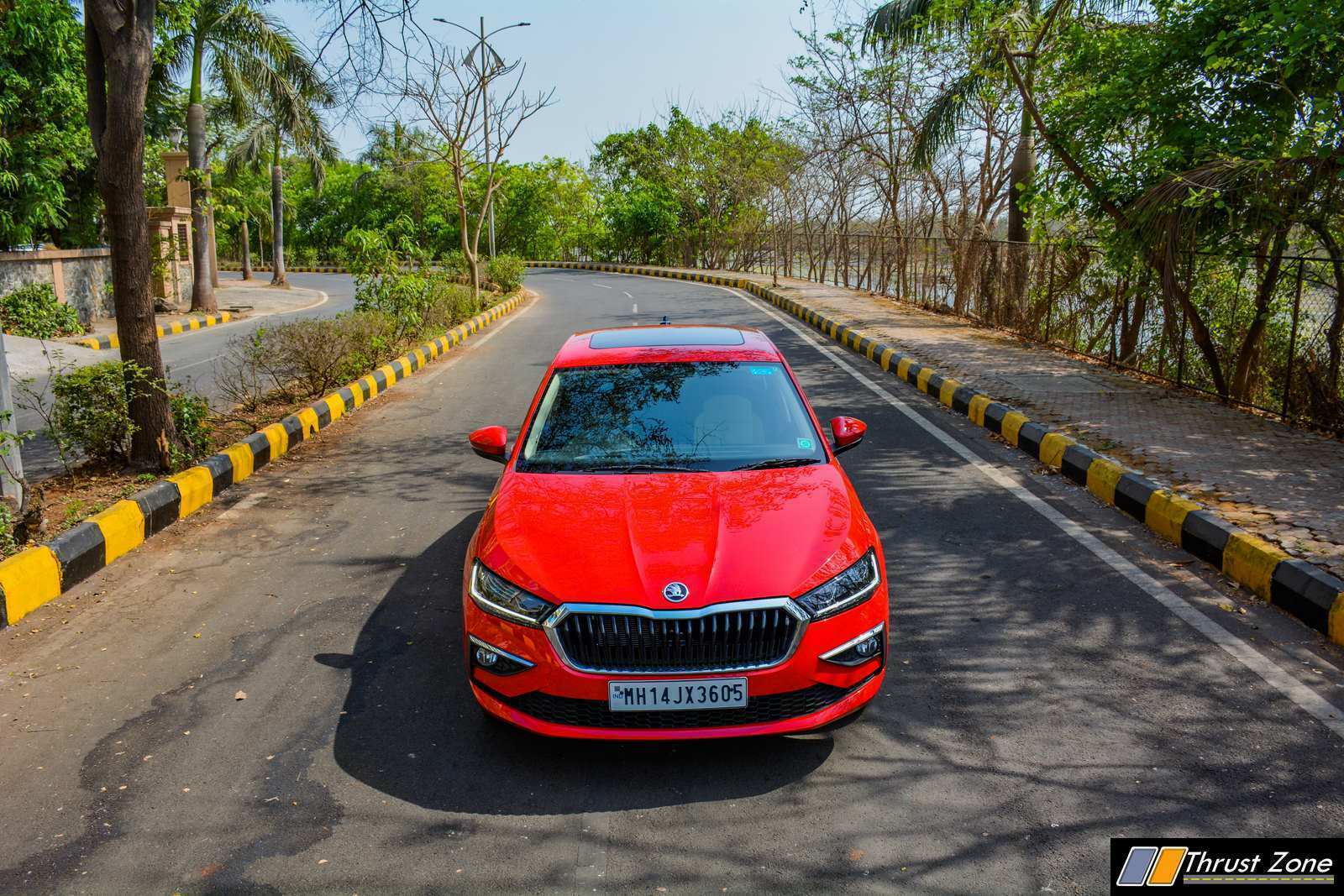 On the outside, the large black grille grabs attention and looks substantial as it does look befitting in red color on our test car. The LED DRL at the front and very fancy-looking C-Shaped LED tail-lamps makes the car look all typically Skoda sedan that we are seeing worldwide. The side profile is of a proper European sedan as it looks clean, sharp, and subtle at the same time. The longest wheelbase and length in its class help it achieve a stance that is unmatched in its class when compared to its rivals in the present and from the past too! We like the illumination and spread from the headlamps. 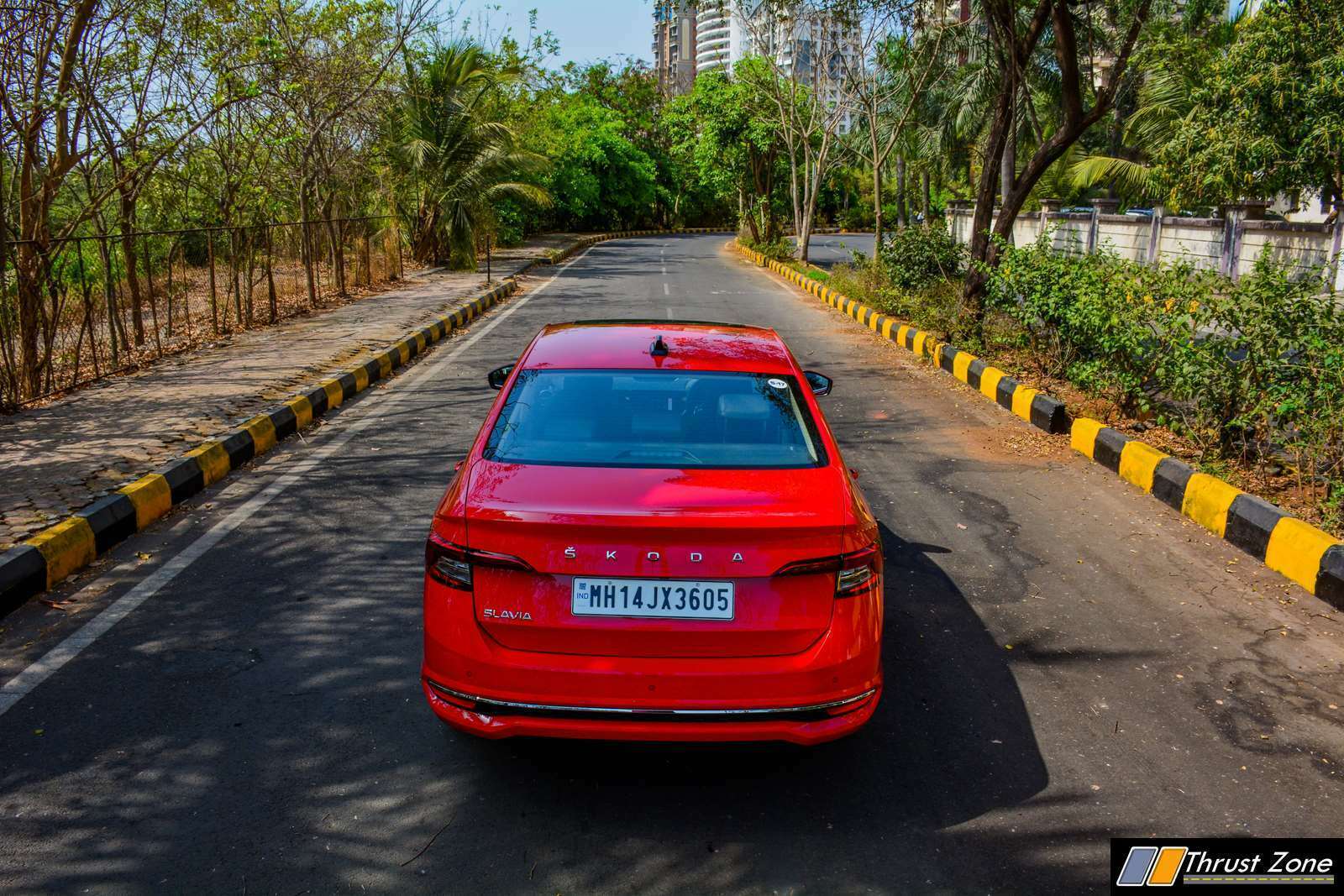 The only downside is the slightly high ground clearance and bigger wheel wells that do not give it a look of the focused sedan, but more of a practical everyday sedan.
The build quality on the outside seems and sounds great and it should score high on the crash tests as well. 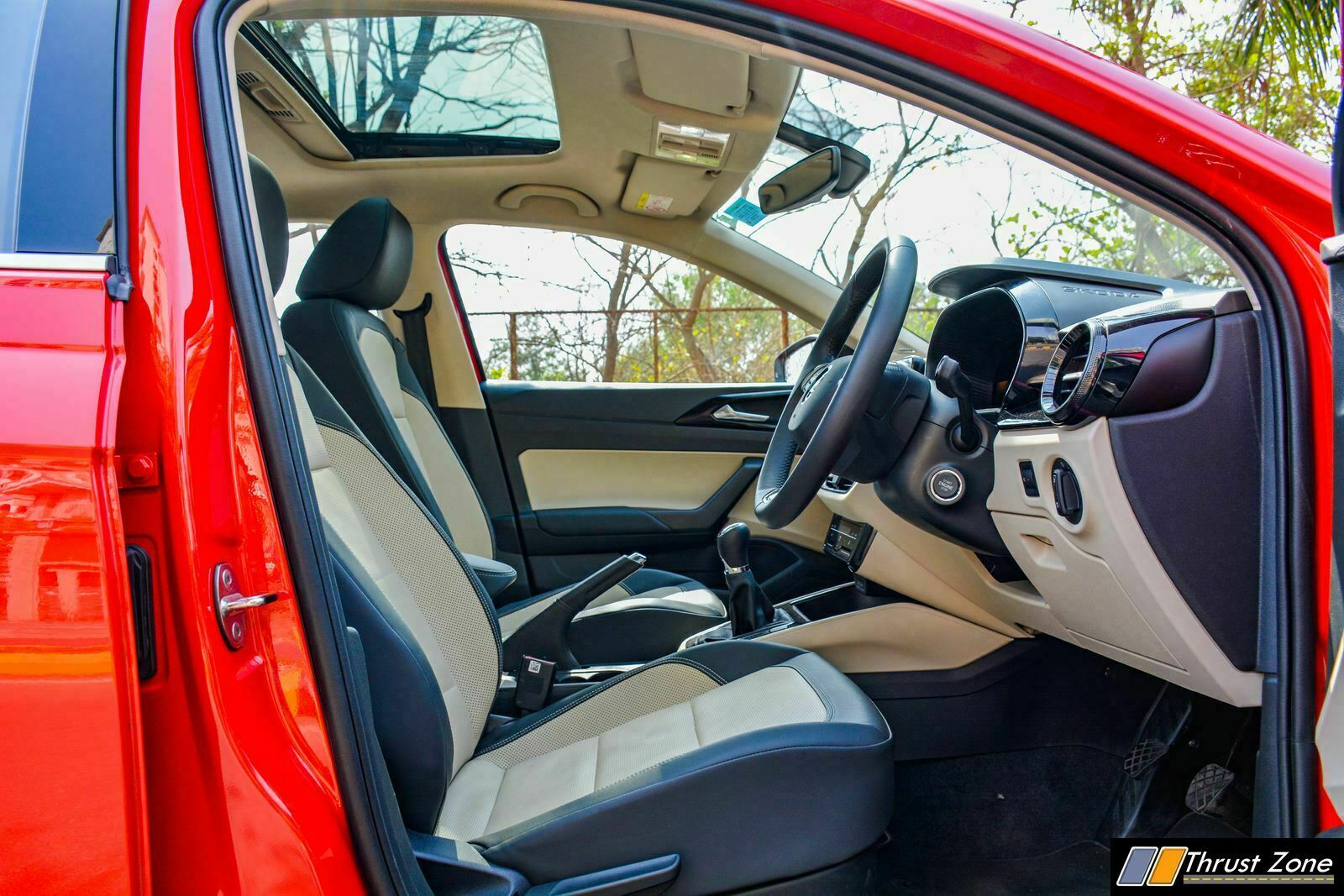 On the inside, the build and quality are good and so is the expansive feature list. You get automatic lights and wipers to reversing cameras, single ambient light, projector lamps and more. The main screen is slick, quick, and works quite well. There are some bugs with Android phones when it comes to playing music on our test car which should be a one-off case. Skoda Connect system includes a host of GPS-related features such as GEO and time fencing and much more. 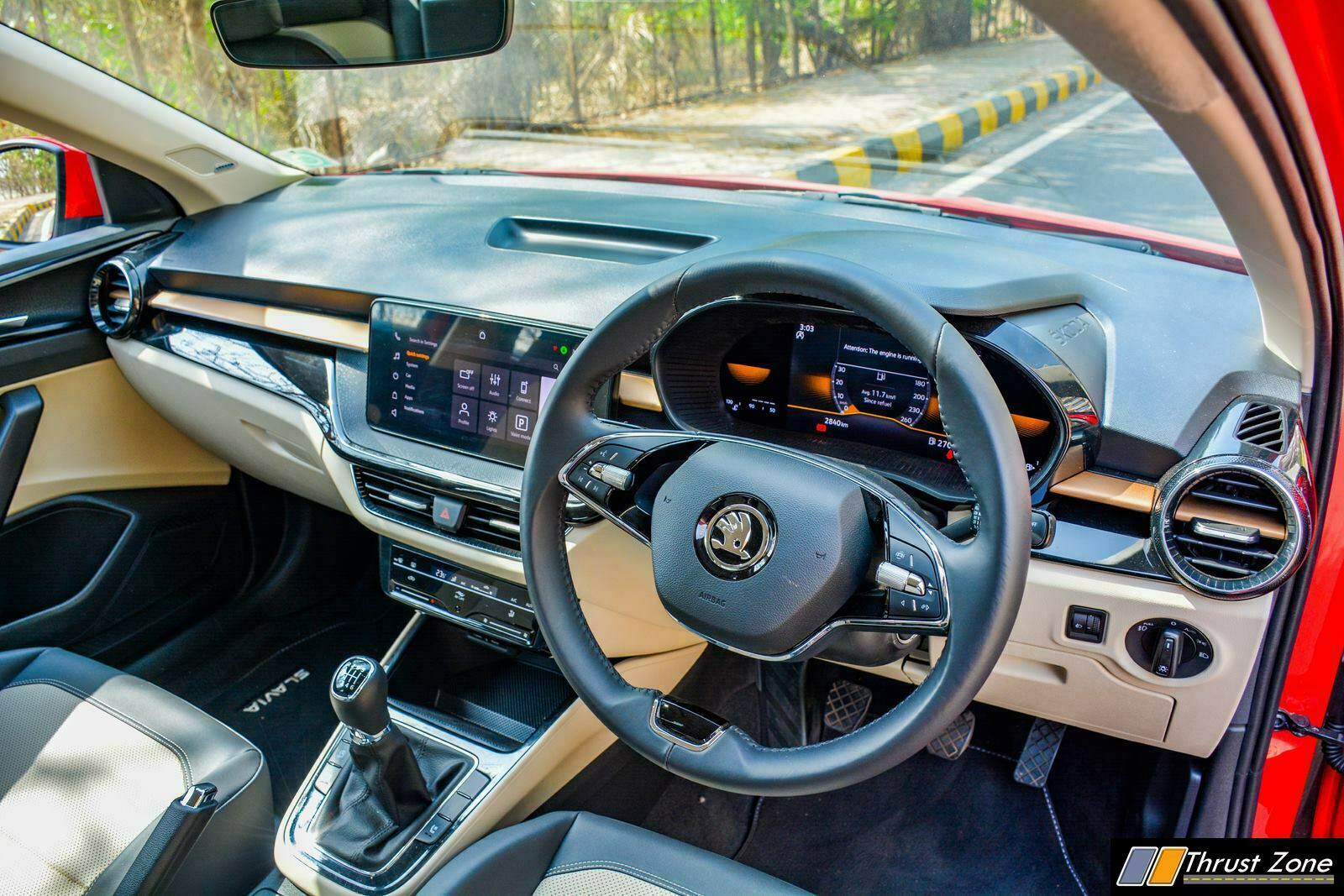 The car is devoid of the large panoramic sunroof, power seats, and front parking sensors. The exclusion of heated mirrors from all cars, even European in India, is disappointing. However, it gets Wireless Apple Car Play and Android Auto that work flawlessly along with a normal sunroof. The instrument cluster area has all fuel economy indicators and other bits can be seen with a touch of the toggle button on the right side of the steering buttons. A fantastic sound system by Skoda themselves is on offer making the experience top-class. 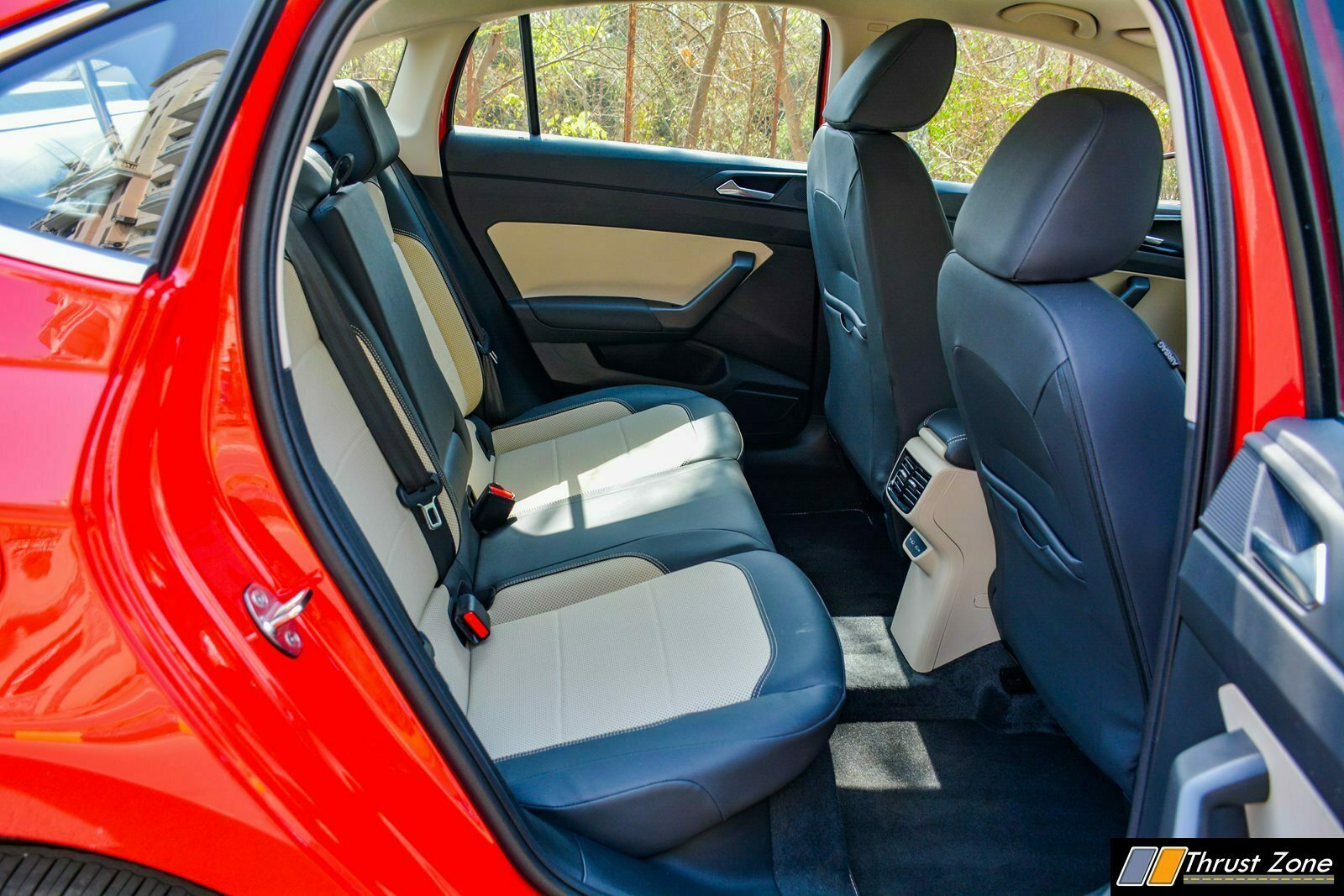 Space is more than adequate when it comes to shoulder, leg, knee, and headroom. As always it is more of a four-seater than a five-seater. Fifth is a squeeze and only best for shorter distances. The boot space is good enough at 521 liters and so is the overall practicality of the interior. Road and wind noise inside the cabin is also well-controlled thanks to good insulation all around. Like any other Skoda, it is still a pleasant place to be thanks to things like Aircare with multi-level filtration. Safety kit continues to be high with the inclusion of active safety features such as electronic stability control and six airbags on the top-end variant, Hill Hold Assist, ABS and EBD, and more come as standard. The passive safety feature list, as we know, is far larger and highly appreciated. 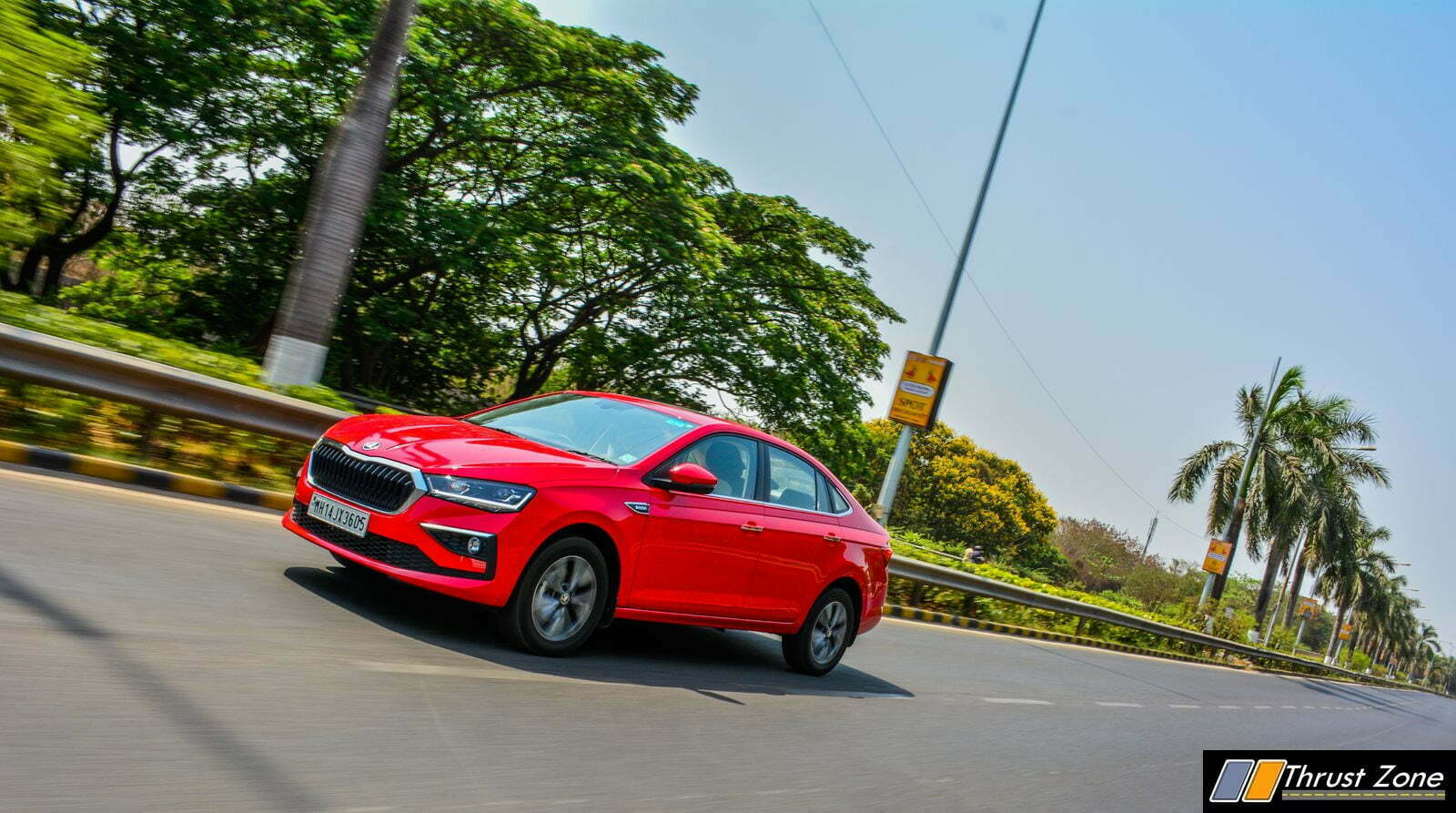 Volkswagen group TSi engines are smooth, free-revving, and low on NVH and the one on the Slavia, falls in line. Be it in any part of the rev range. Low and mid-range are good on the 1.0 turbocharged petrol motor. The 1.0-litre TSi 3-cylinder unit makes 115 PS and 175 Nm of torque also has a fast and smooth shifting automatic gearbox. However, the shifts are not entirely seamless while downshifting, which feels exciting for enthusiasts but everyday joes may not appreciate it. There is also a bit of turbo lag between 1400-1700 RPM but below and above that it moves very swiftly. 1.0 liter also delivered 10 km/l in the city and 15 km/l on the highway in our testing. The manual gearbox is easy to use as the shifter is smooth with a long through and the clutch is light. The engine sounds gruff but the way it revs and creates a soundtrack at the top-end of the rev range is music to some people. 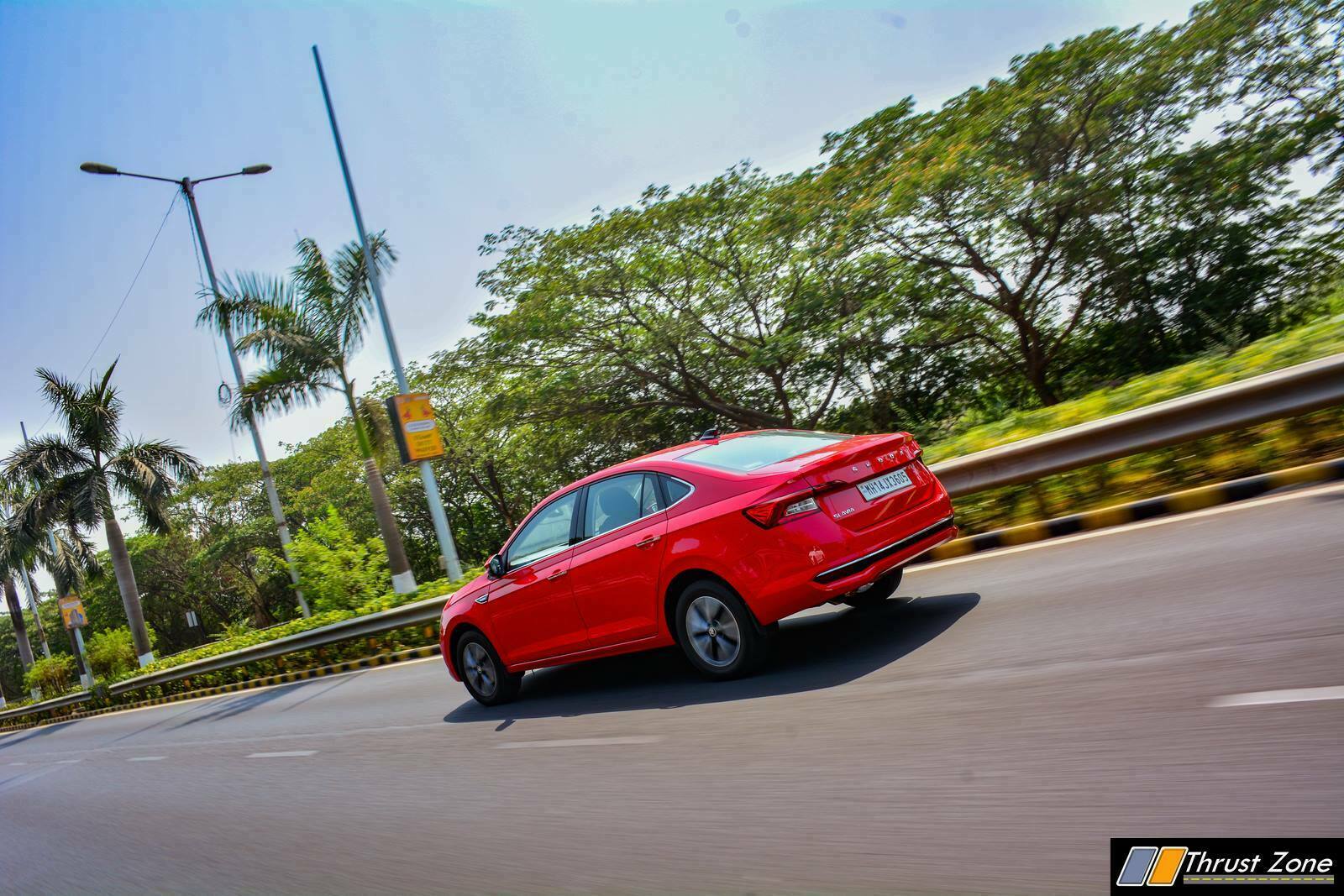 The ride quality is more reassuring at all speeds than ever before with VW group vehicles in India as it does not crash that often. The way Slavia has been set up, it is a car that you buy and drive yourself and even be driven around. Best of both worlds. Yes, the ground clearance is high, but it still aces the way it takes bad roads at all speeds making sure you get the sedan experience with bare minimum downsides of it. 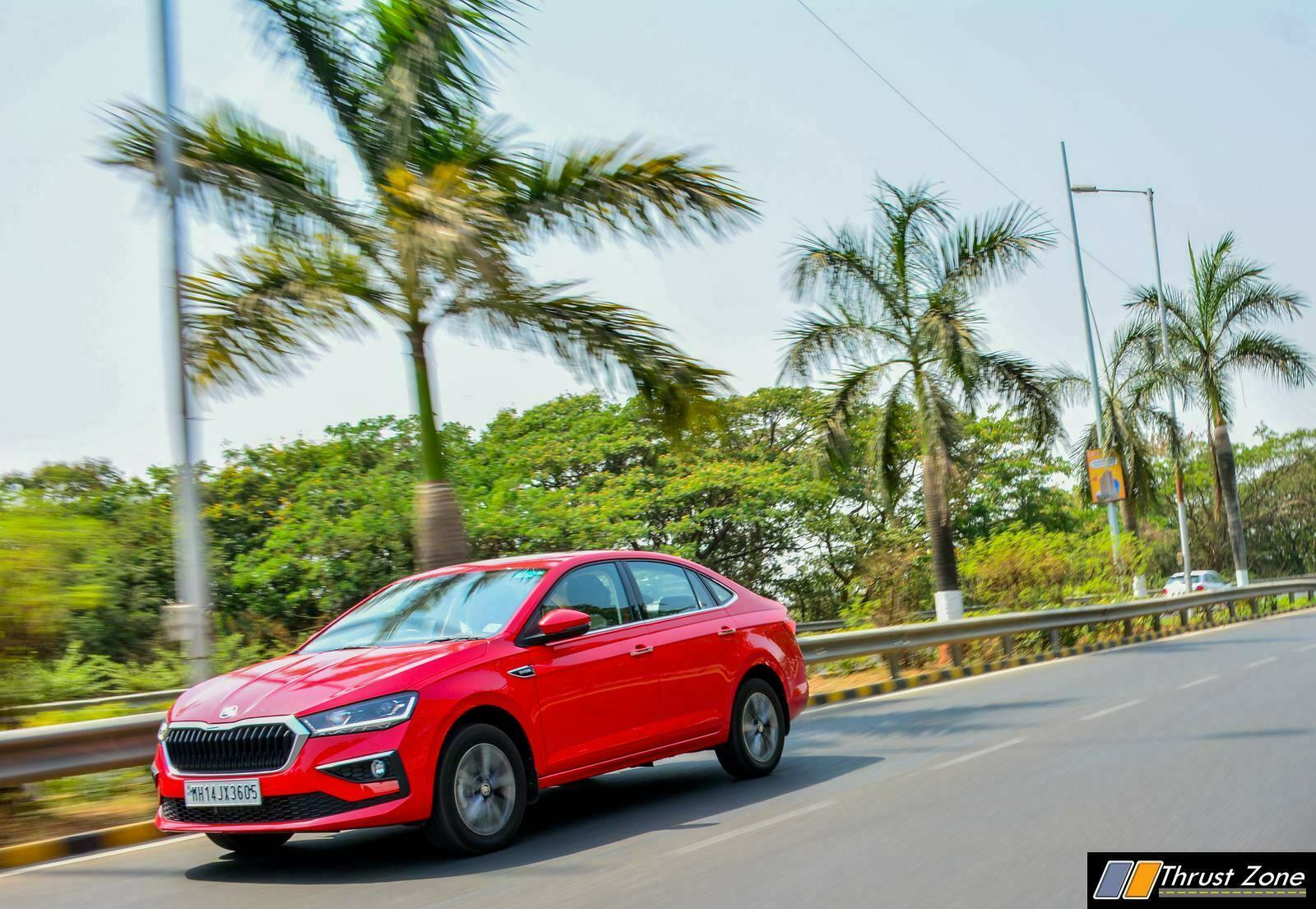 The steering gives enough feedback and is very precise at all speeds. It weighs up well on the highway too. High-speed stability is spot on thanks to the ideal balance of underlying stiffness and compliance. The brakes were good too with great pedal bite and a lot of performance on offer. Body roll exists while changing lanes at high speeds but it is still a very confidence-inspiring car to drive at any given speed. Overall, a very easy-to-drive car and the same time the most fun-to-drive car in its class. 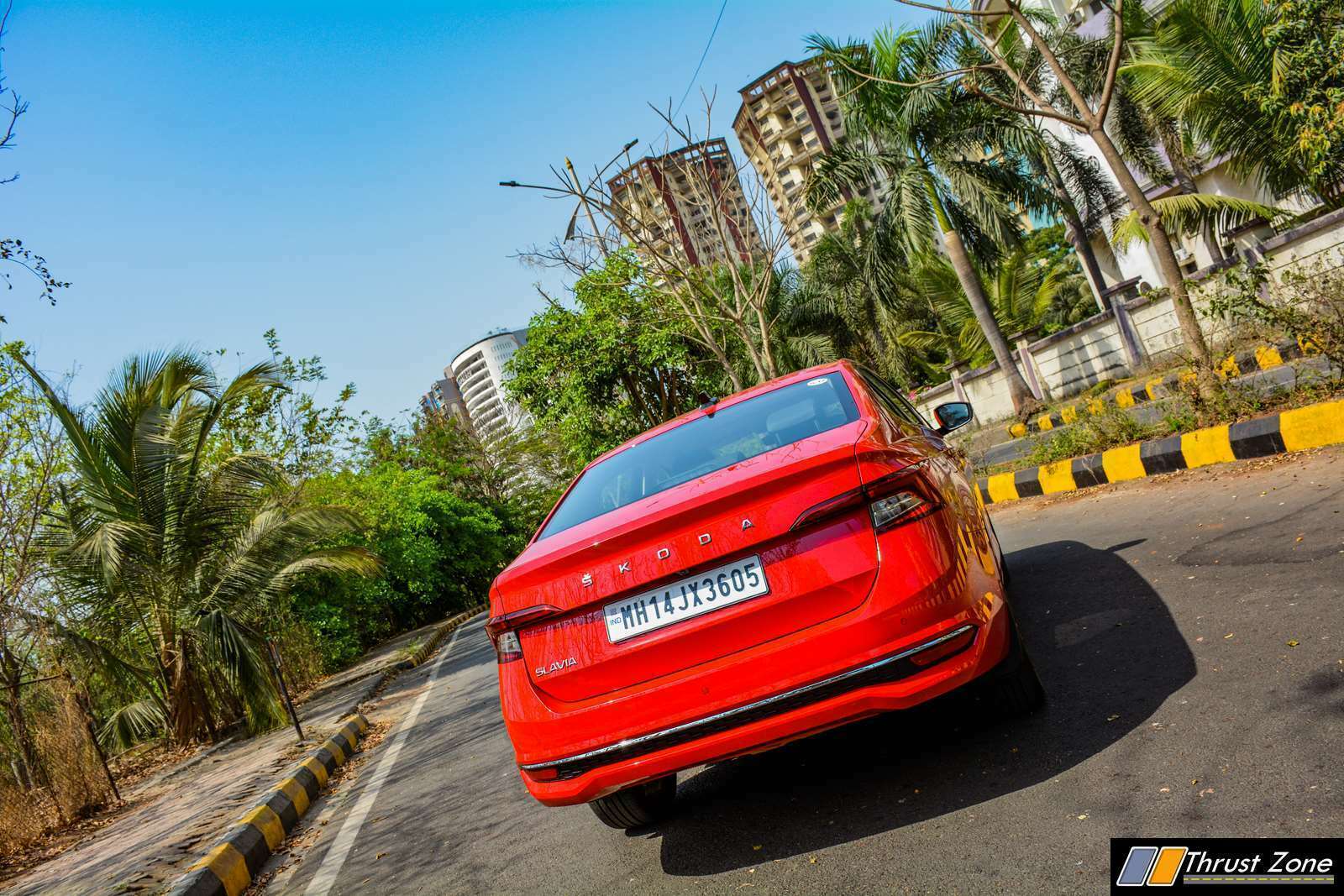 The only reason you wouldn’t consider the Slavia is the pricing seems higher. Given we have seen 2022 car launches, nothing is really ‘super value for money for a long period of time. Slavia falls in that bracket too. However, what you get is a European sedan that looks good in any color, drives well, practicality is at its peak and space is on par with its key rival, the Honda City. Slavia could be better when it comes to two or three bits of interior quality and design for me is still something I need to get used to. The Slavia is a product we recommend for enthusiasts on a budget who need to have a family car in their garage, have fun and enjoy the best of both worlds.