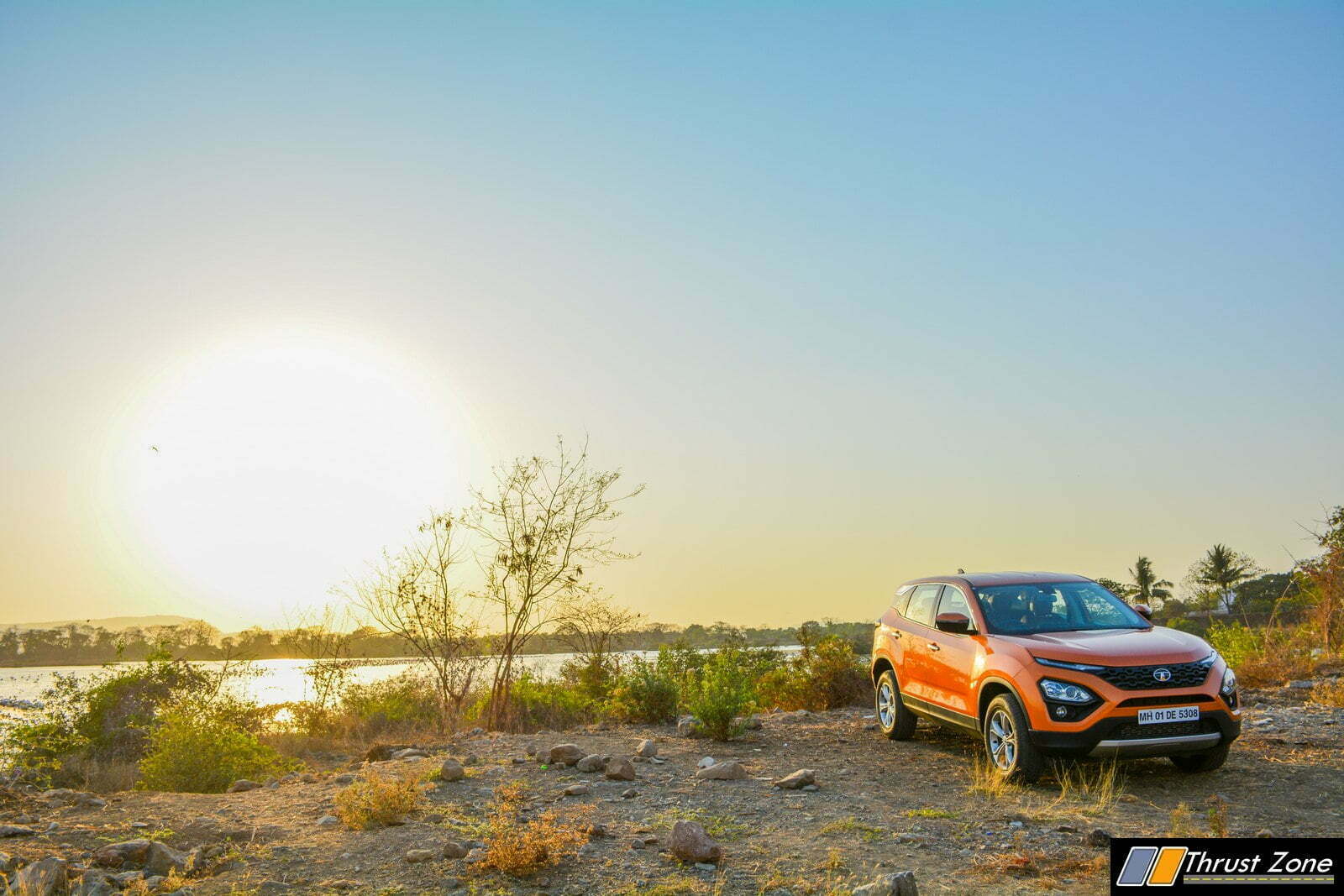 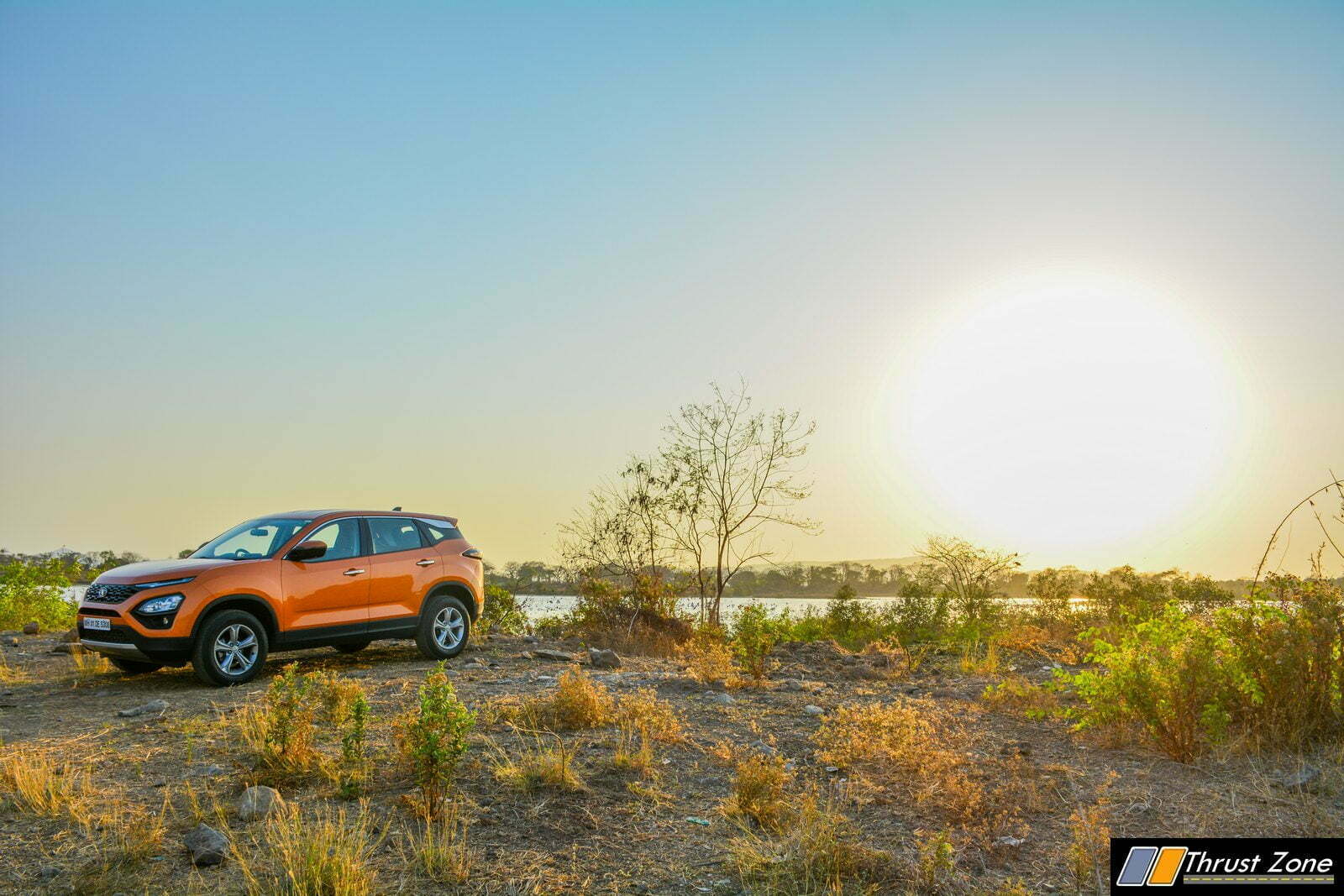 The Tata Harrier. The most teased product in the Indian market. Why, Indians love SUV’s just like the rest of the world. A little extra metal and height guarantees safety and a better view of bad roads ahead of you, you clearly need that in today’s world. Let’s face roads anywhere in the world are not that great, we have been fooled by photoshop. The Harrier on the other hand is also most awaited because after the Safari, a true blue SUV wasn’t offered. Hexa was extremely impressive, but the Harrier seems the original thing. Based on the popular platform from Land Rover, the D8, the Harrier means business. How does it deliver in all areas. Let’s find out! 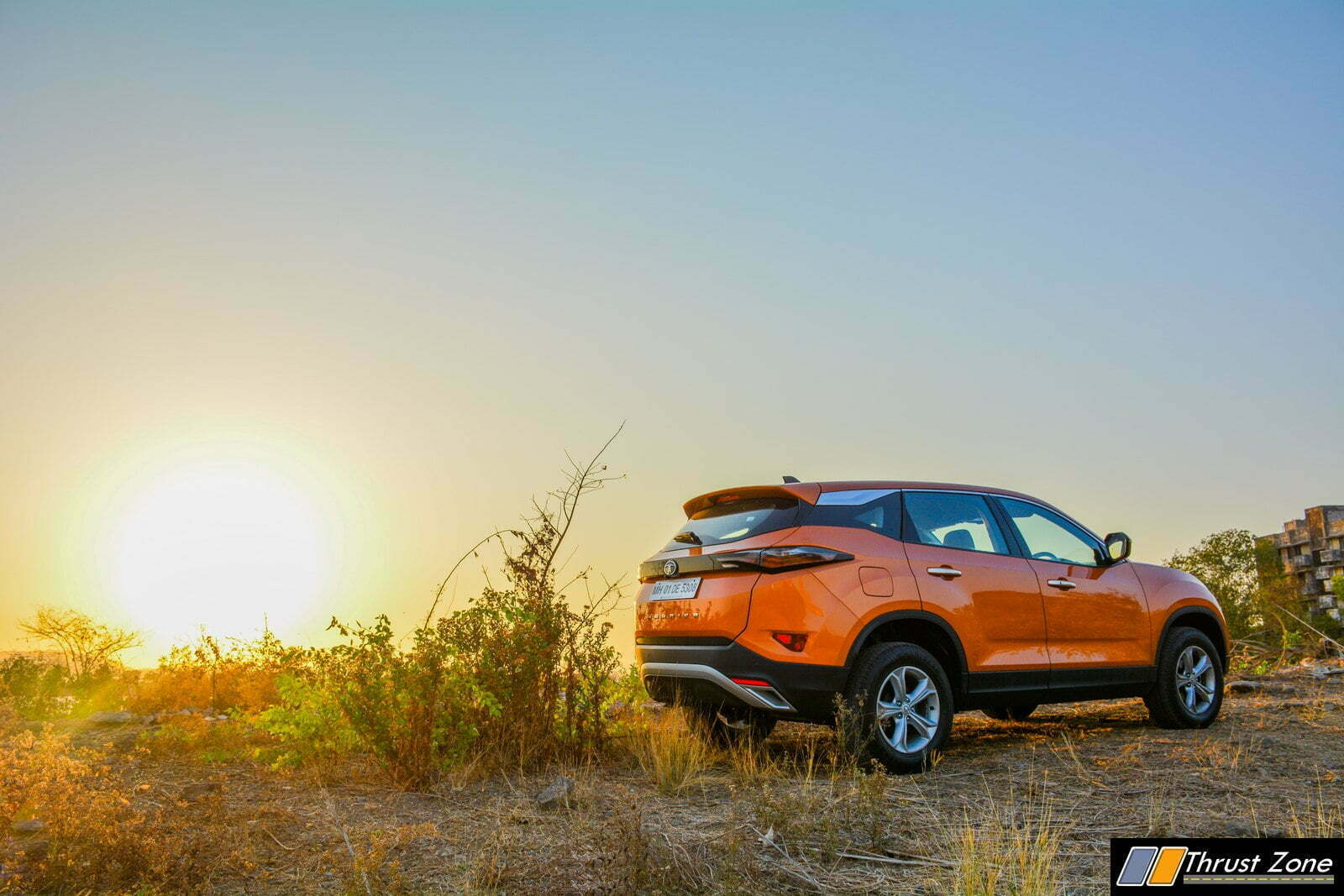 Styling is the highlight of this SUV and i don’t know when i used these words to explain an SUV. The Harrier is futuristic at the front with the new design of LED DRL on the top and headlights at the bottom. This is a new trend because the government around the world are setting trends to limit the headlight at a certain limit in height to make sure SUV’s don’t blind the world in front of them. Liberal move, in the right wing world, wow. The side profile is the coupe form, but with four doors derived from the Land Rover Discovery Sport. This could easily pass the next generation Discovery Sport. 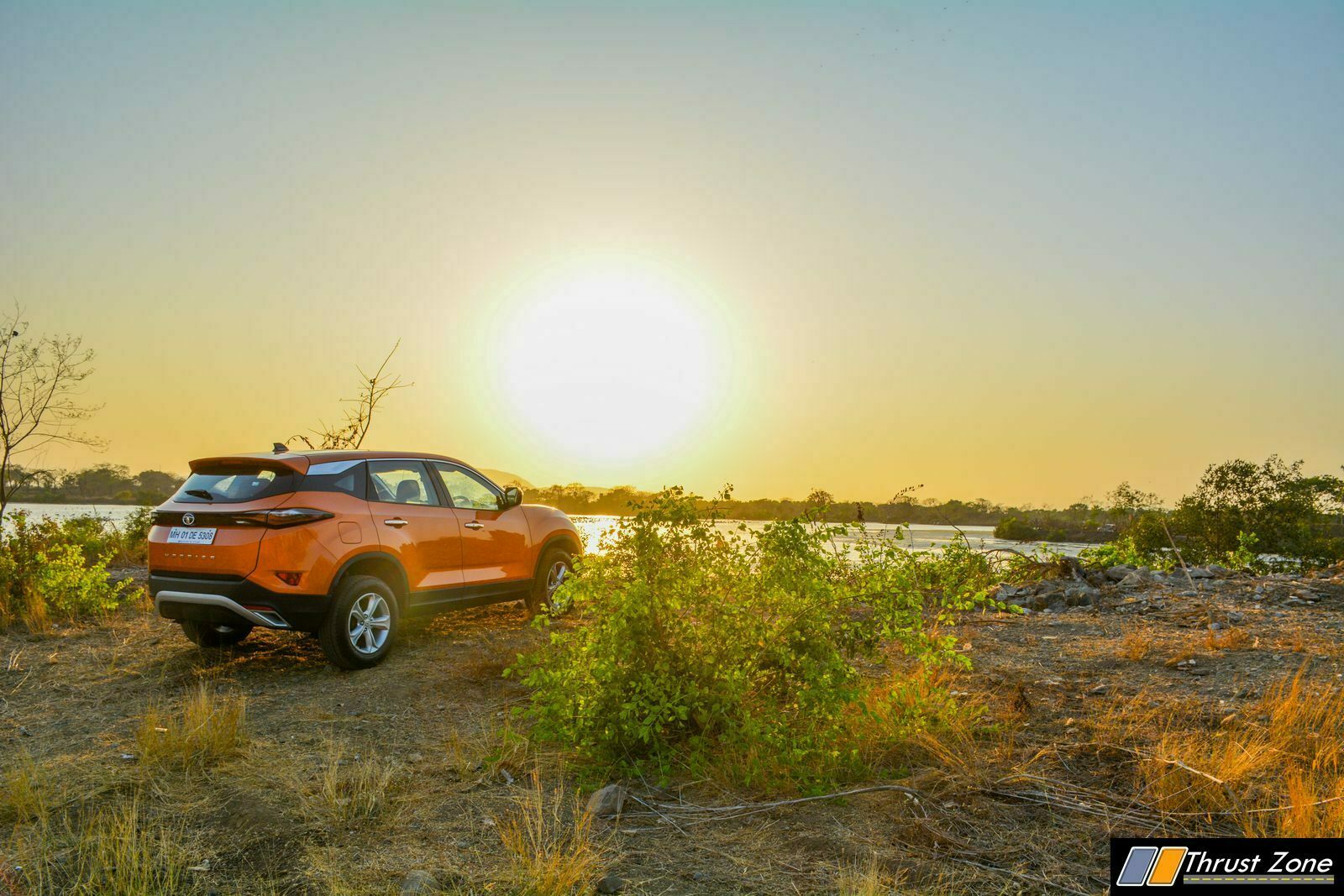 If you would tell me, i would believe you. The RR Velar moment for Tata Harrier is seen in the tail-lamps which are smoked, long and have the lovely LED detail in them. The alloys are basic in true Land Rover tradition for India, it continues in the Tata product as well. Overall, any shade, be it white, orange, silver or anything else, the Harrier shouts muscle and intelligence like never before. 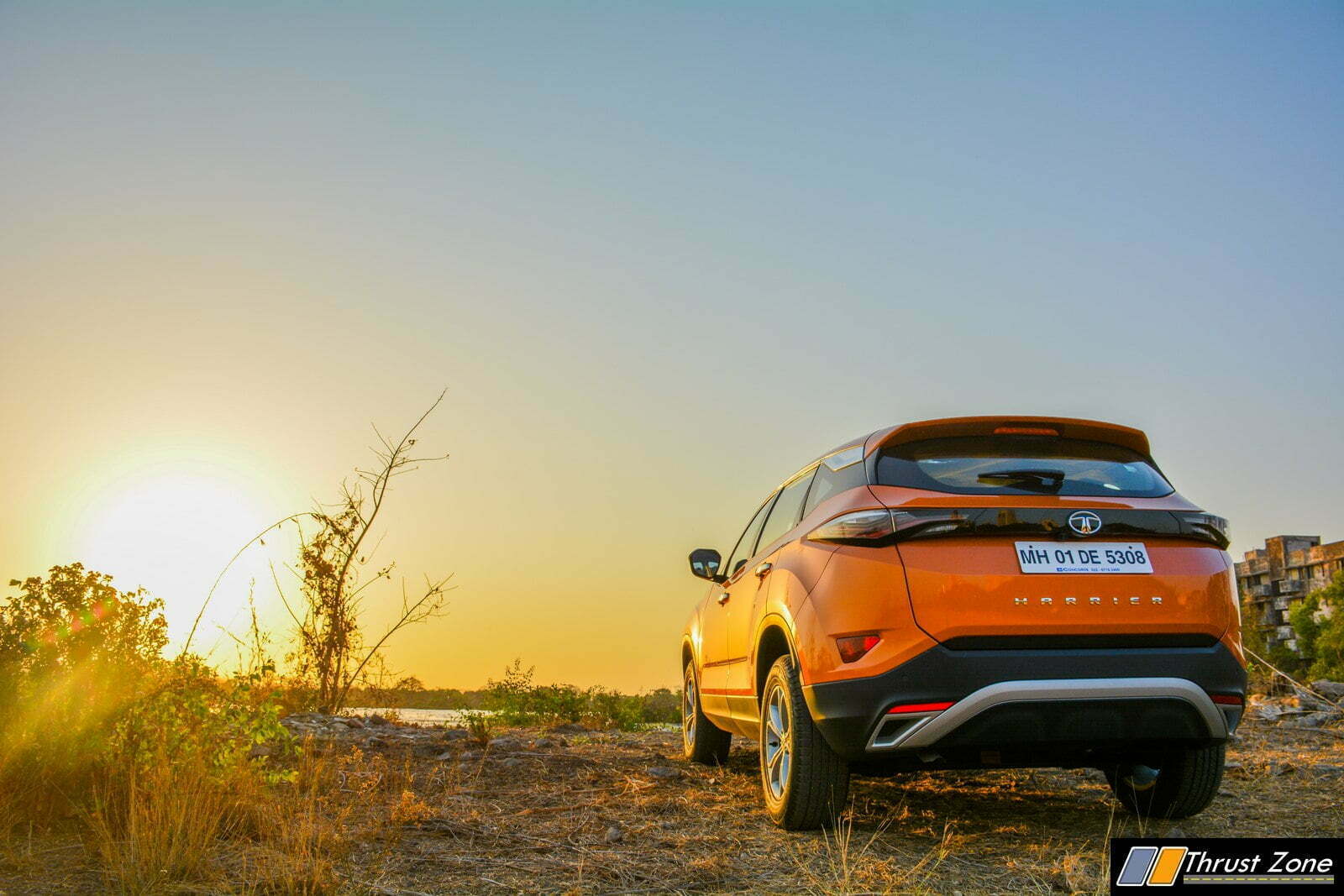 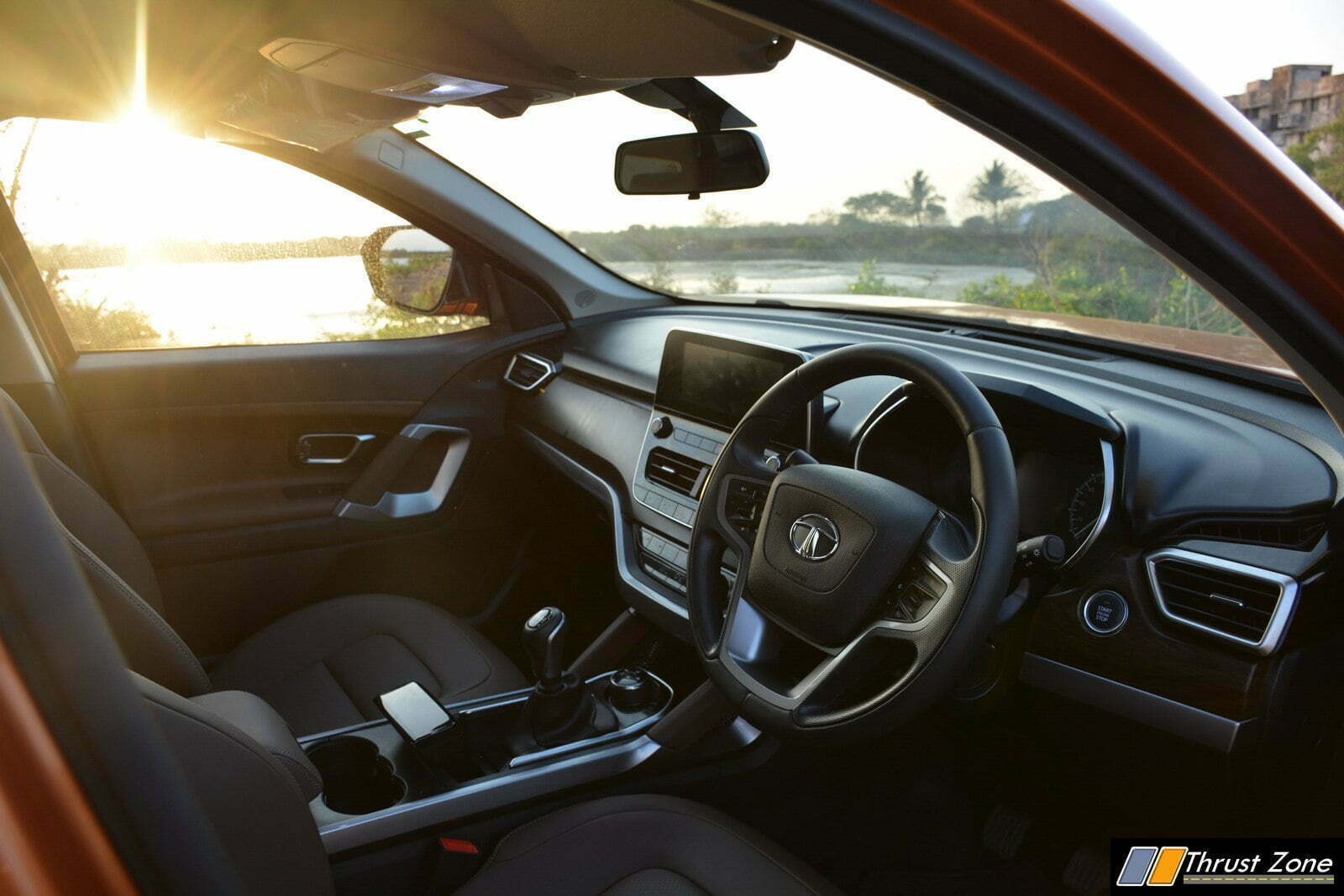 Interior feels like an budget version of a British car of the past. A lot of wood all around, with a significantly large dashboard with the right proportion are on offer. Aluminum finish around the edges of A/C vents, soft touch dashboard is a welcome move, by the bucket loads which makes cabin experience far better than expected! The new steering wheel is larger than the new age Tata’s already saw and has a lot of buttons on it. 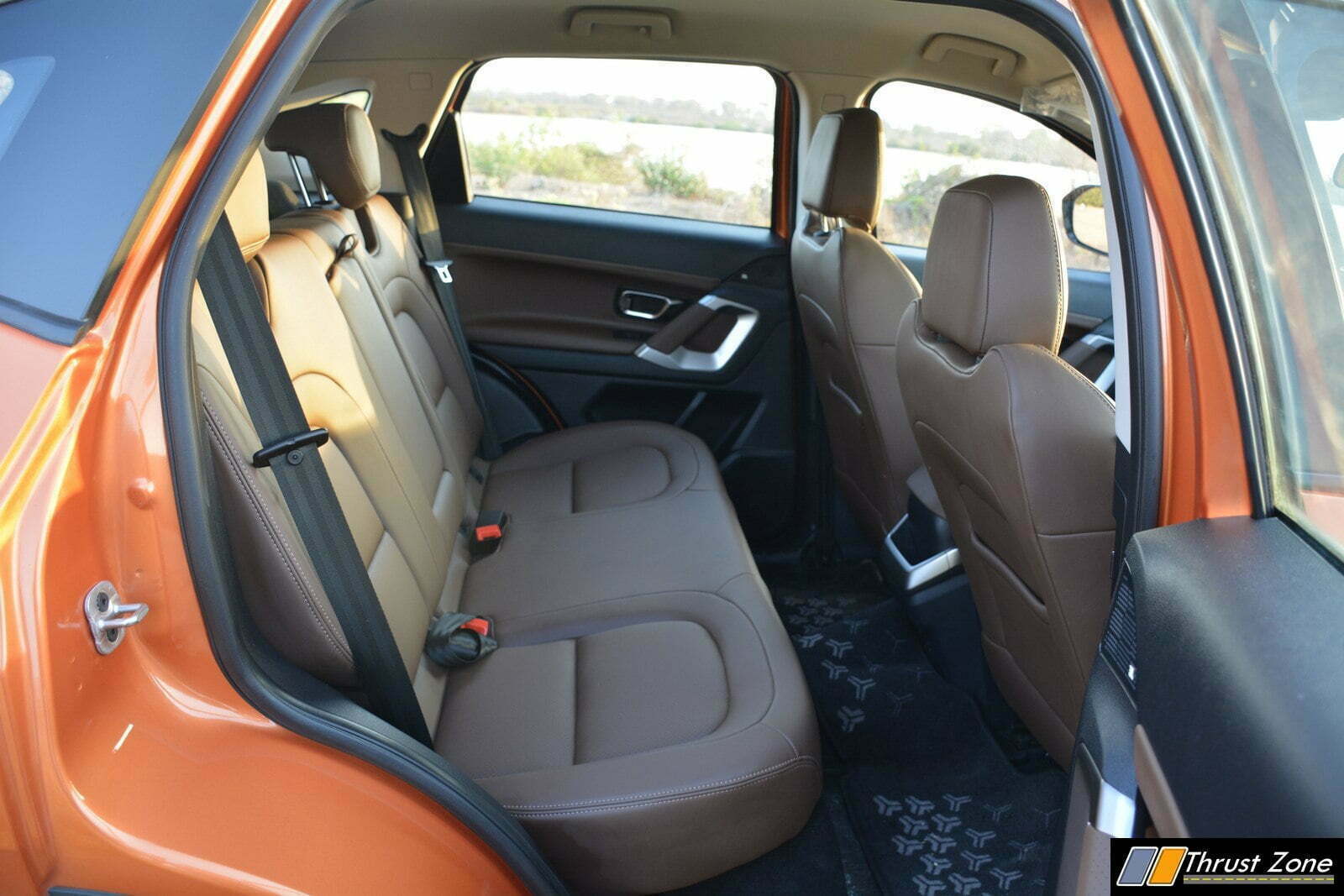 Quality is quite good, but Tata continues to miss on how to finish the rough edges, something that is tolerable to a certain extent but as the price, segment and expectations go up, Tata does need to improve. Below the dashboard things are minimalist with fewer used of buttons. The buttons operate usual feature and the driving mode button is the last button towards the driver. Start-stop button is on the right side. The NVH levels of the engine are acceptable and very good and isolation from the rest of the world is also excellent in terms of traffic and road noises. Wind noise is higher because of the humongous wing mirror which block the view at times of the side. 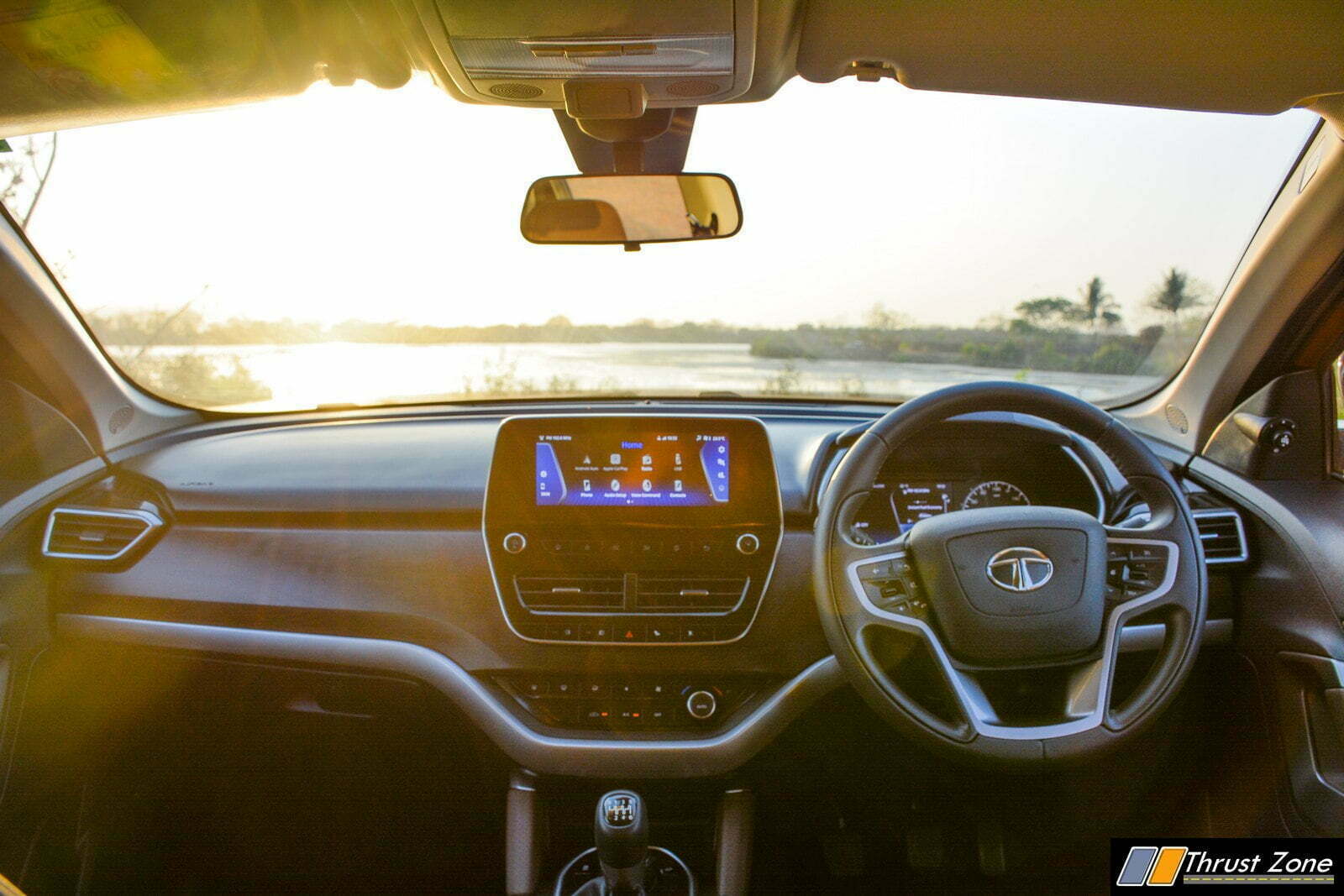 Features list includes a highly informative dials with all fuel economy parameters, a screen in between, cruise control, steering mounted controls, apple car play and android auto, electric ORVM, reversing camera and sensor and a extremely well performing A/C. Sadly, there is no auto IRVM, front parking sensors (a must with a car that headlights mounted below) sunroof, auto fold mirrors on offer. There is a puddle lamp with projection of the car sketch which is a lovely addition. Also, the sound system as always is great for this price and segment. Safety kit includes Hill Hold Assist, six airbags, ABS and EBD with traction control and fog lamps with cornering function.

Below that there is a rotary knob for off-road, a aircraft style handbrake which looks great and operates fairly well, but needs to be more crisp in action. A large cubby space below the arm rest, two large cup holders and a big glovebox is on offer. There is space below the handbrake and in front of the rotary knob as well to pop up things. 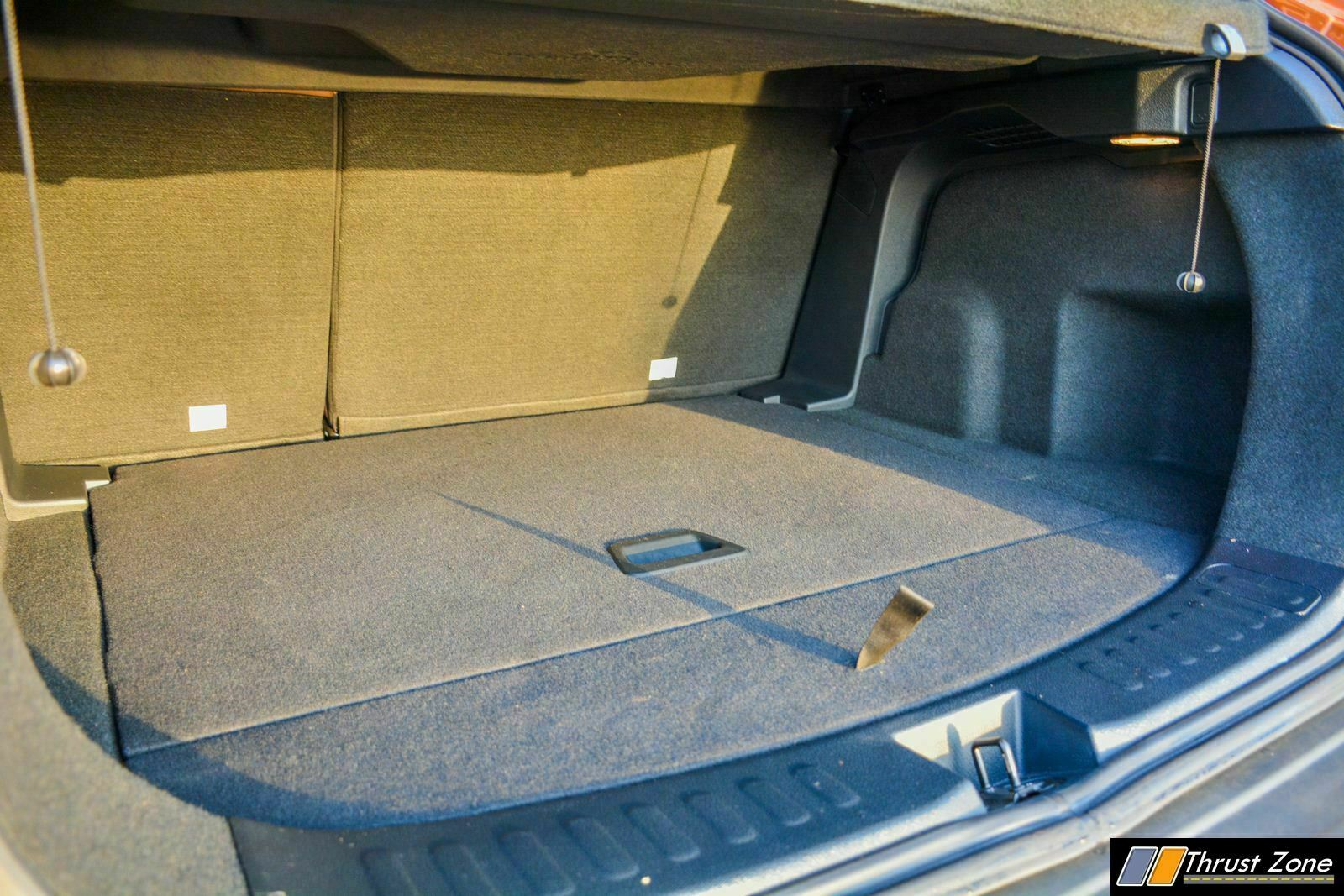 In true Tata tradition there is a lot of space at the back in terms of knee, leg, head and shoulder room. The cabin looks plush and almost airy thanks to chocolate color leather seats used all around. Boot space is slightly low at 425 litres but is quite accommodating. The sample floor mats in our car with the new Tata Logo also adds flair to the cabin. 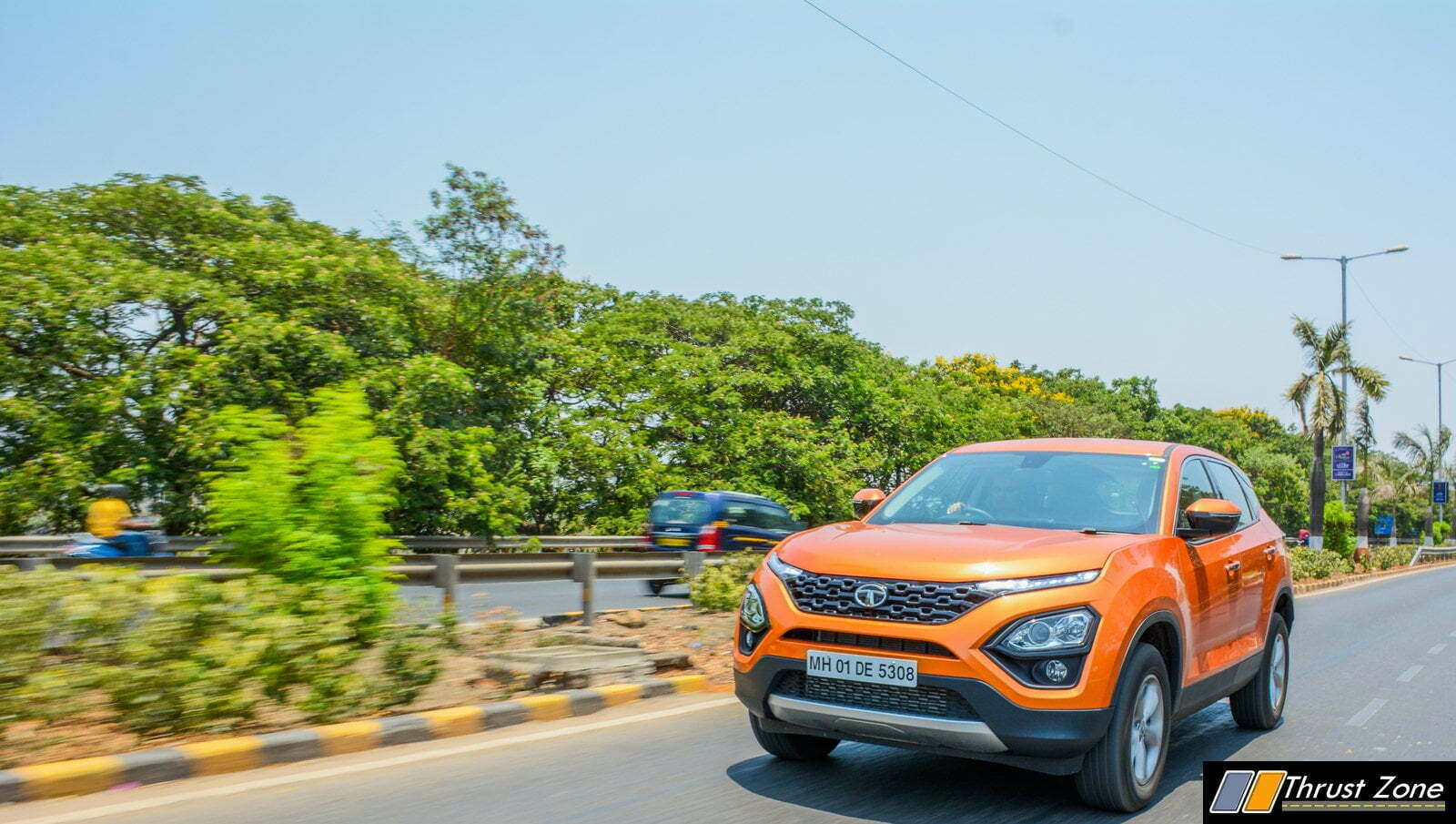 Driving the Harrier was a familiar affair as it came with the 2.0 litre Multijet motor witnessed in the Jeep Compass. The engine runs on 140 PS and 320 Nm of torque state. The motor is smooth, quick to rev and makes torque all around the power band. This means driveability in the city, overtaking on the highway and performance is more than adequate. Fuel economy runs around 11-12 km/l which is good for a car of this size and price. The 6-speed gearbox is a delight to use considering the size of the SUV. The clutch is light as well. 0-100 km/hr in 13 seconds and a top speed of 180 km/hr is enough performance for our roads. 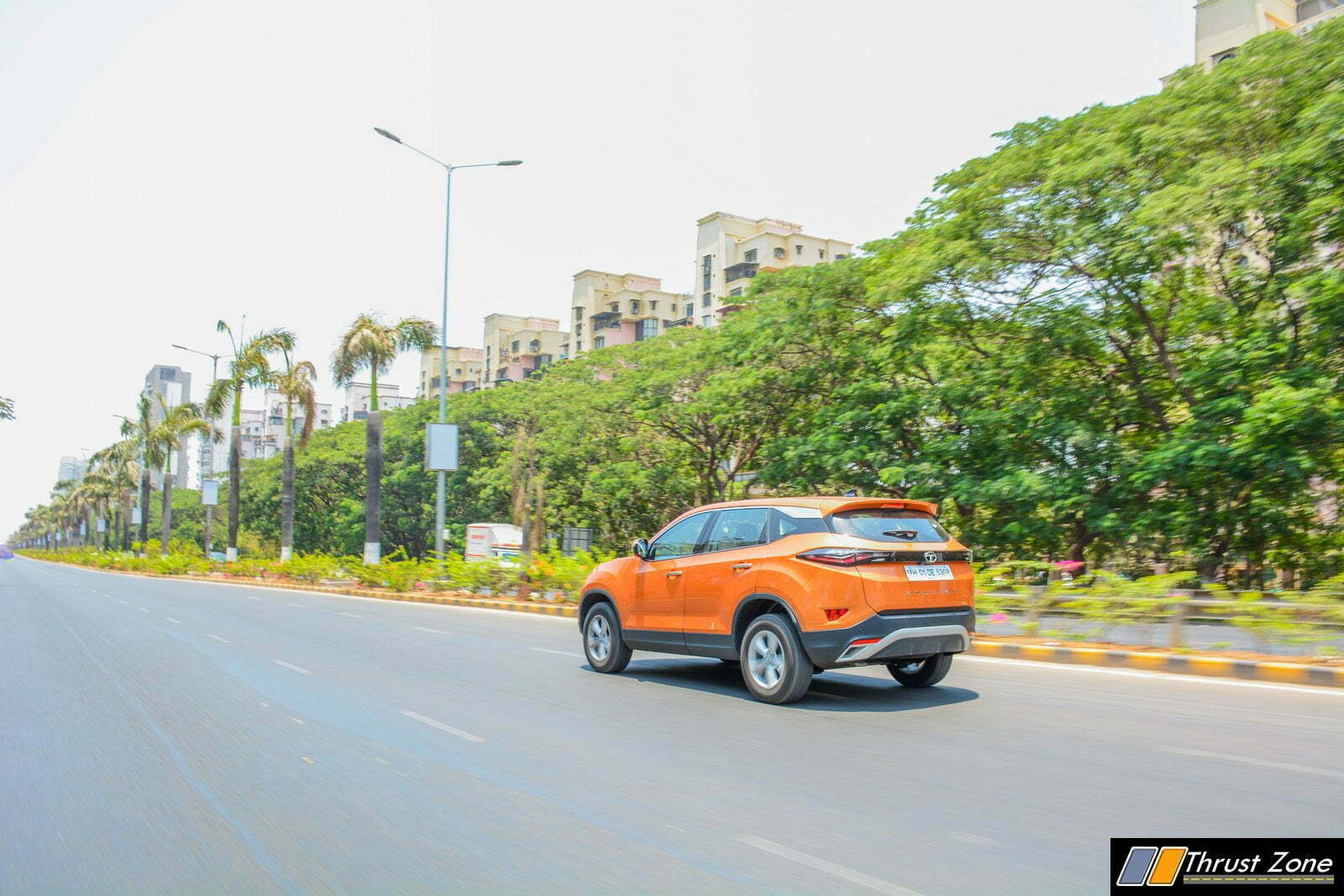 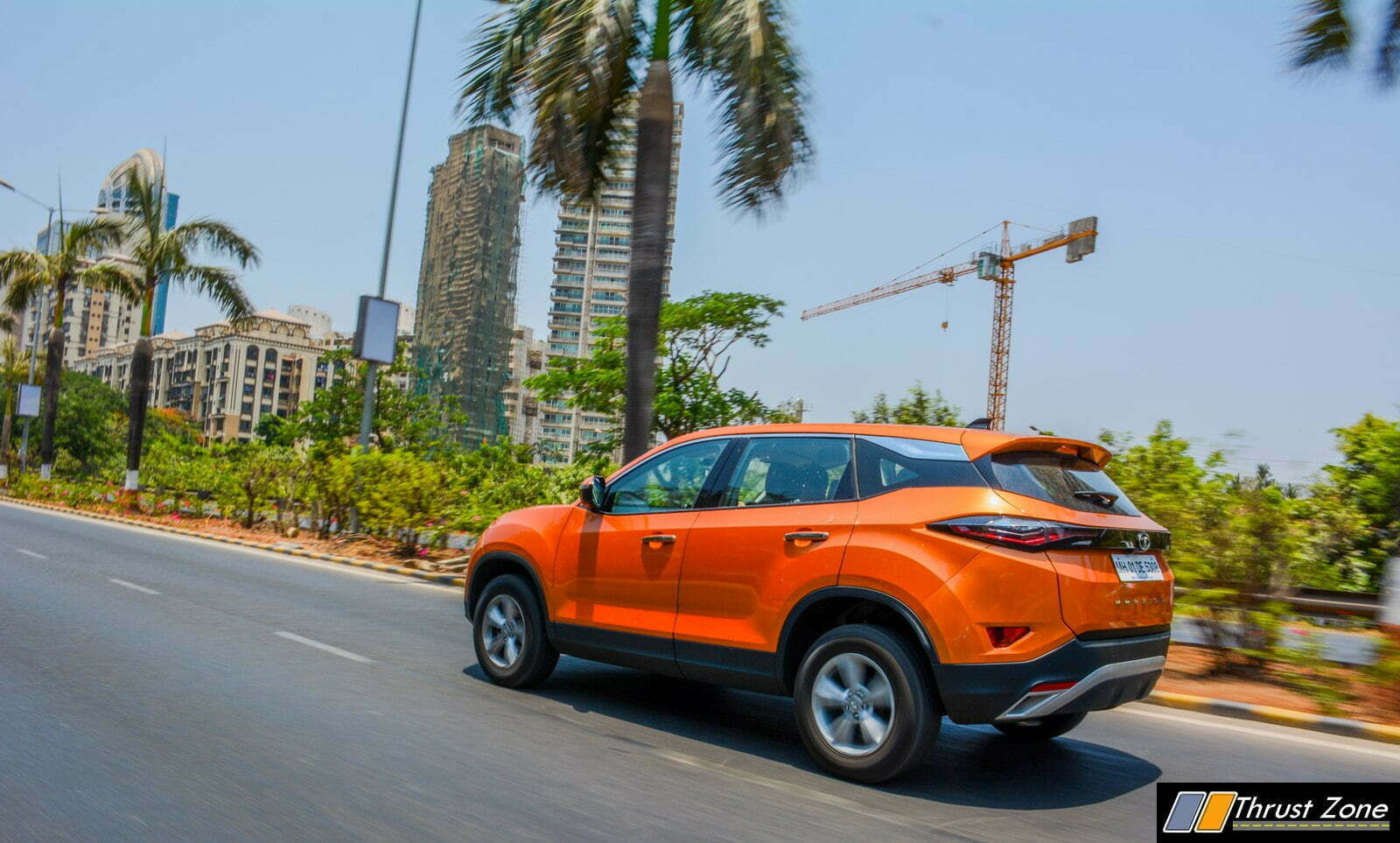 Ride quality of the Harrier is exceptionally good and suspension has no vertical movement till legal speeds, post that there is a wee bit of movement, that too, is well under control, which includes the limit of the body roll as well. Brakes are good with grippy tyres and a lot of physical grip on offer from the 18-inchers. Problem is the hydraulic steering which sounds great to enthusiast but isn’t the most communicative at any speed. It’s light and precise, but no feedback or weighing up on the highway is a disappointing and slightly unsafe. 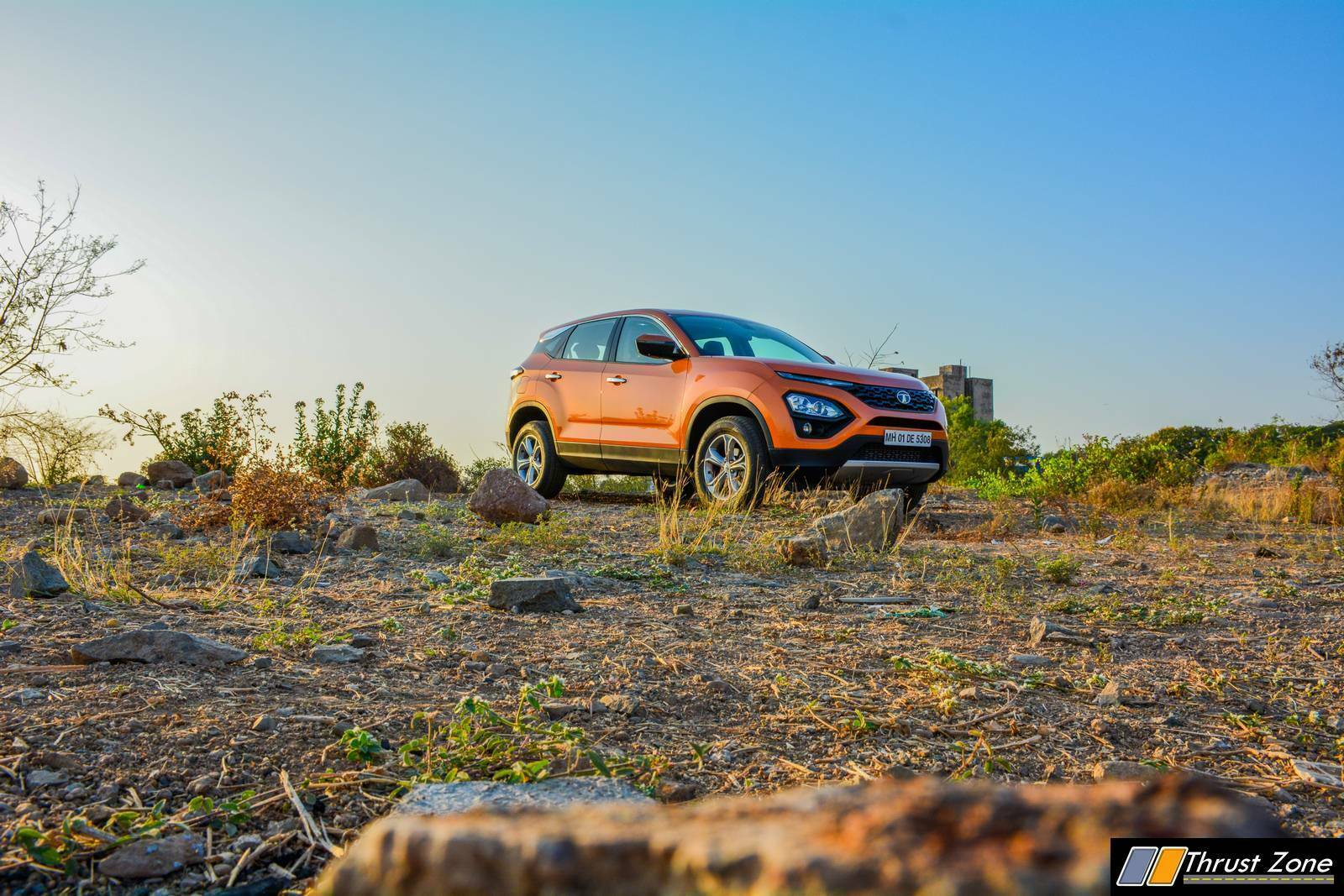 The Harrier, the name comes from a fighter aircraft that takes vertical take off and landing because of the mounting of its engine is different. The Harrier comes from Tata which is known to make great SUV’s in the Indian market. They combined their data and made one with the guys who make the iconic SUV’s in the world. The scenario is a win-win situation for all. 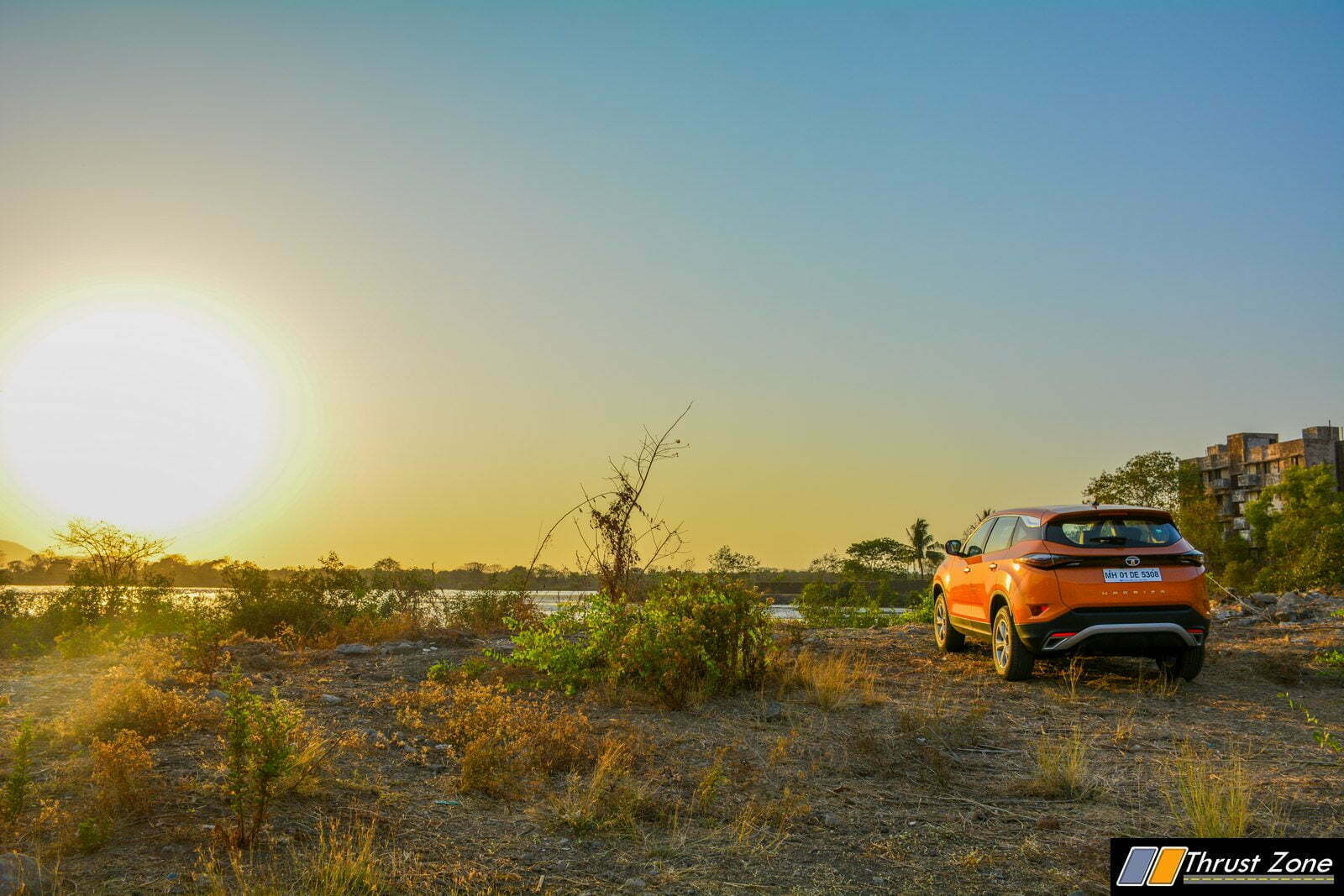 However, Tata also got the features, safety, pricing, styling and packaging the product just right. There are rough edges all around. Be it lack of a few features and a better steering which is necessary. Nevertheless, it got everything else right making it the perfect choice if you are in the market for an SUV and want to spend between Rs 15-20 lakhs.