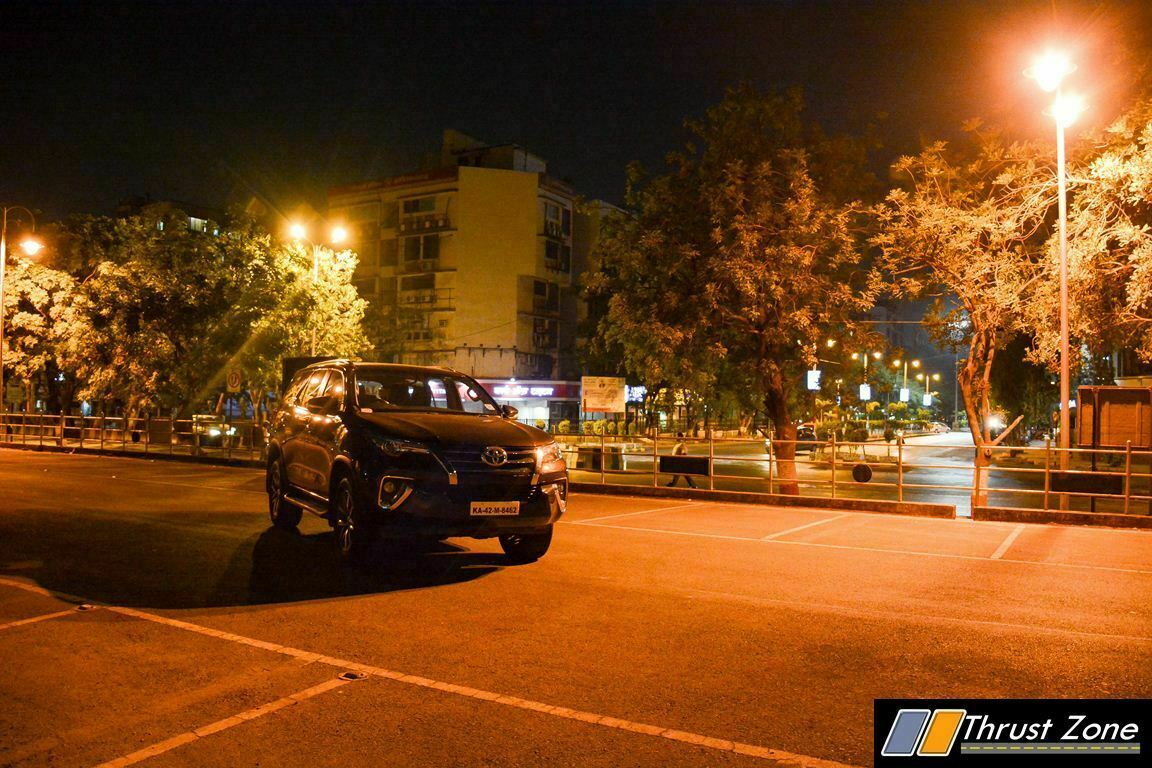 Fortuner continues with its capable traits as before which are good and bad at the same time. Fortuner excels in almost every area, but could have offered more 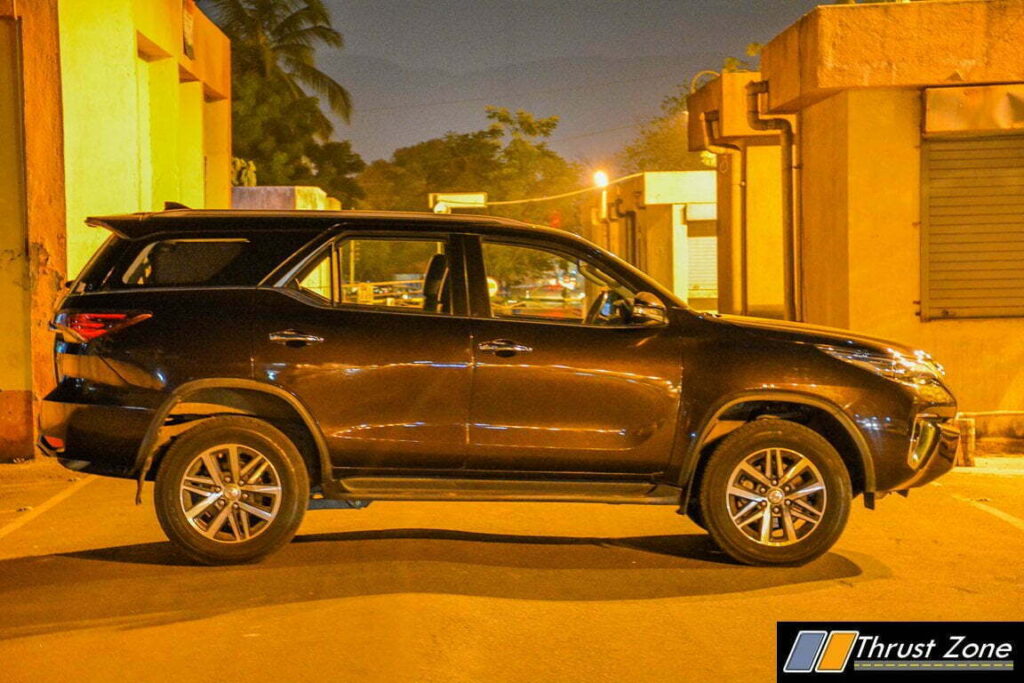 Toyota, no doubt has been doing exceptionally well in the country. All though it makes a lot of cash around the world through small and big cars, here in India it only makes the most out of its premium cars. Big cars are premium cars in India as the market is yet to evolve mentally. Toyota’s two cash cows have been the Innova and the Fortuner and before it was the Qualis. Lexus has just entered the market but it famous in the country for various social reasons. However, we already know what the Innova is like as we had a first ride of the same. The same platform underpins the Fortuner and it is said to be more premium and carry more of everything along with it. 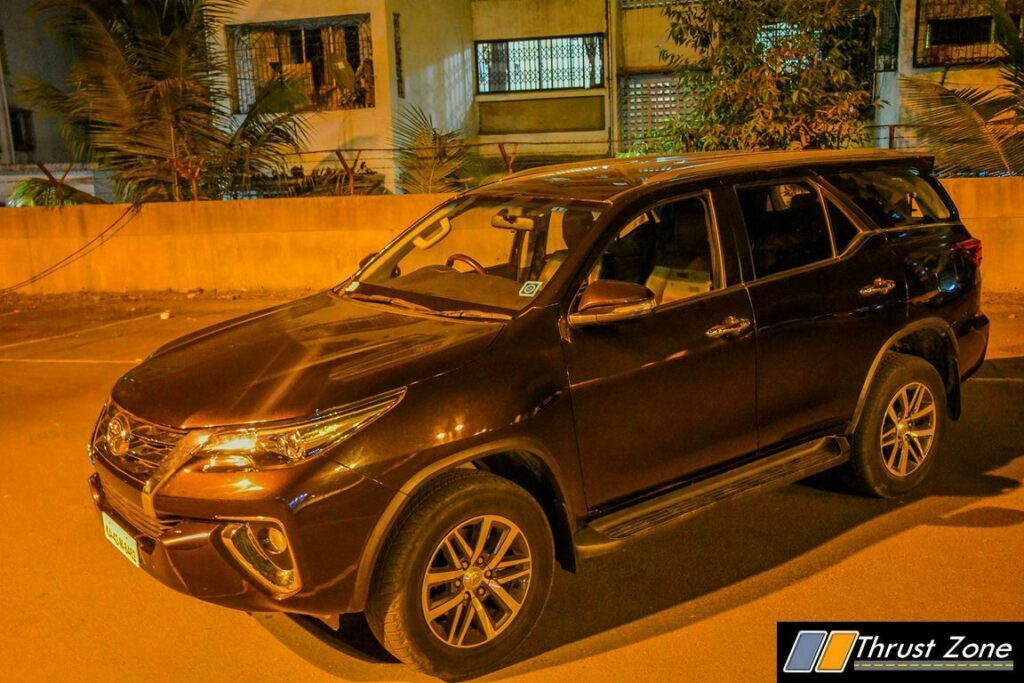 This version has more of everything right from weight, engine, price or design and it is what we can confer after we finally got our hands on the new Fortuner. Fortuner is the segment leader like the Innova despite it commands almost Rs. 40 Lakhs in some cities from customers for its top of the line trim, it still does marvelously for the company. We spend some quality time with the car and tell what it is like with this new Fortuner and does it impress the critics and audience, both, at the same time or none this time. 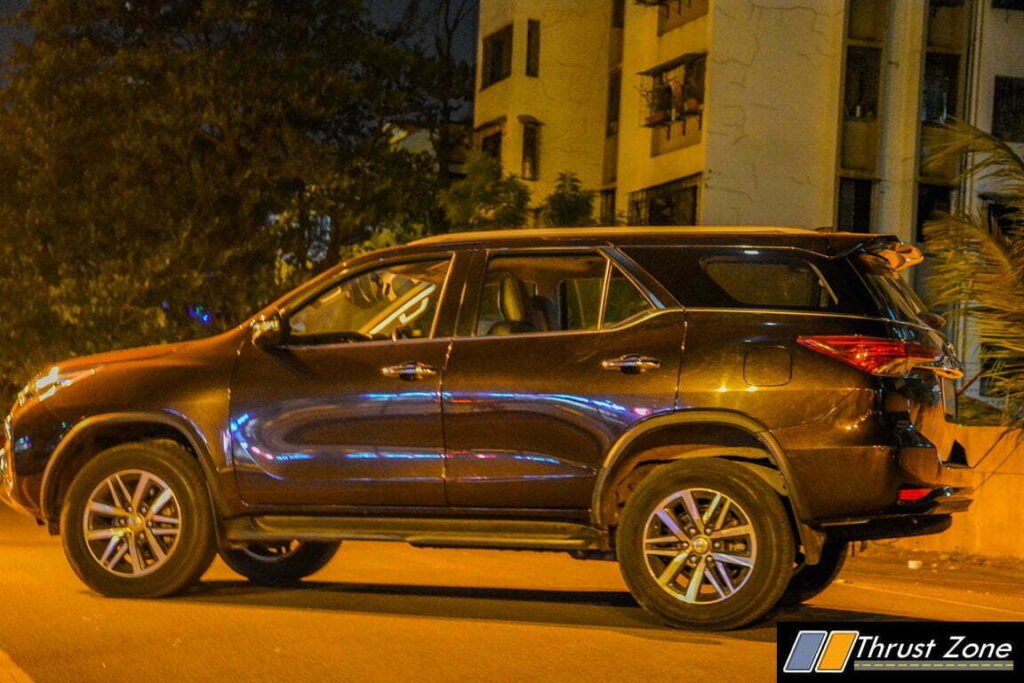 When it comes to design, the Fortuner does look rather impressive than before. The thoroughly modern design inspired by Lexus can be seen here. The ultra sleek and beautifully crafted headlamps and tail-lamps look apart. The front grille and bumper are chiseled properly this time and look busy and good at the same time. The side profile is very high thanks to large doors and small glass area. The large horizontal wheel wells, car like design of the alloy wheels makes it gel well with the overall design. 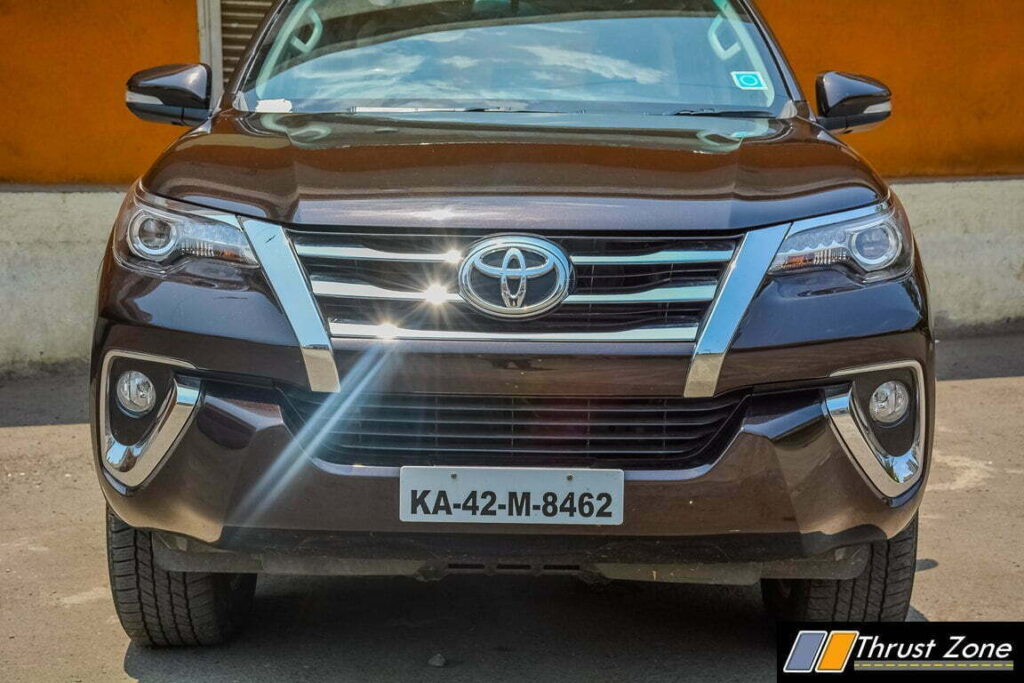 The way the line rises on the rear door and extends flawlessly till the D-Pillar is very well done. C-Pillar glass and the rear windshield are still connected but in a different manner and doesn’t replicate the Mercedes GLE (ML-Class earlier) anymore. Rear profile looks contemporary but with subtle touch of chrome and exceptionally well done lines and proportions of the tail-gate and bumper makes it truly stand out and this time in a very modern manner. 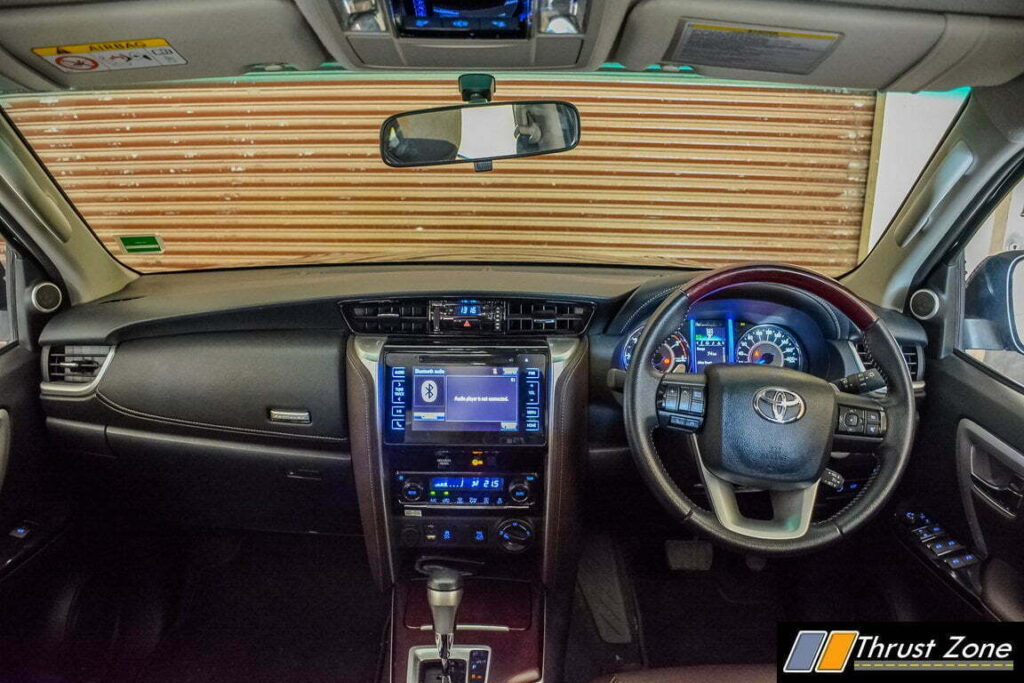 When it comes to interior, Toyota has upped the spec clearly. Soft touch materials all around are present, a minimum use of plastic is evident, but the same plastic has gone a notch higher but should have been higher, it still feels hard and not pleasing to the eye. What also isn’t that great are the large fonts used which are great for making people understand while driving, but they do look massively dated. There are other ways to do so. 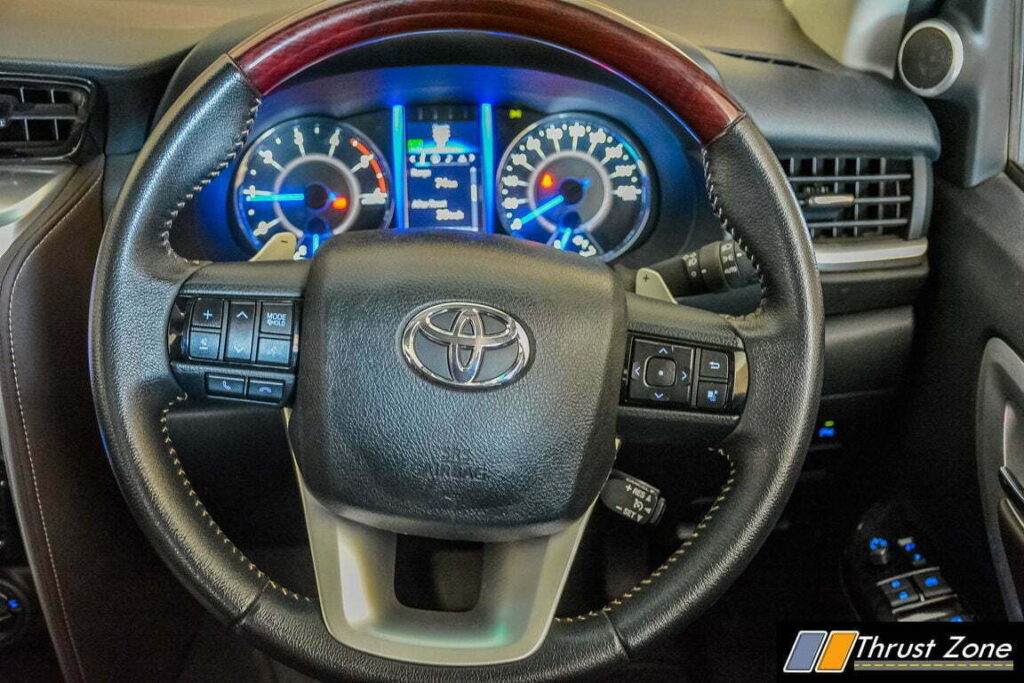 The buttons saying “cruise, mode, hold” isn’t exactly adding a soothing touch to the cabin and same is the case with the touch screen. Something that is big and comes with all connectivity options but lacks connection to any smartphone. The resolution is also very low and the navigation isn’t particularly helpful in the first place as it isn’t a live unit. Sound system is good, but could have been better as well. 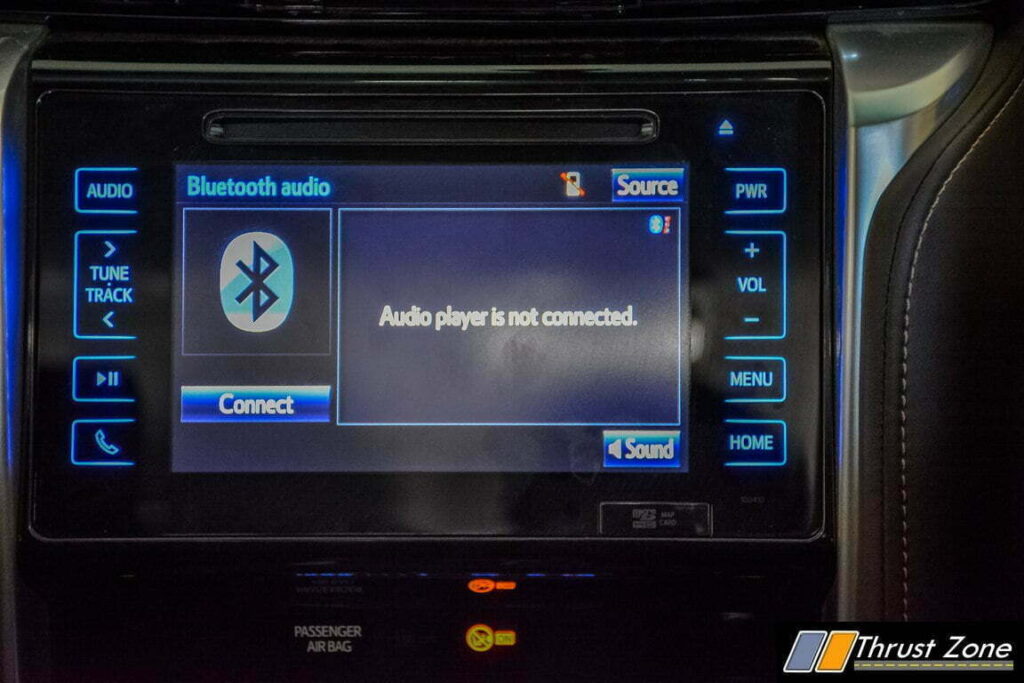 NVH levels inside the cabin are good, but could have been great at this price and this segment deserves a bit more. There is constant vibration in the cabin at idling. Stowage area is in plenty with two medium size glovebox, two large cup holders, a space above the cup holder, large center armrest cubby and door pockets are on offer. Auto up and down mirror with pinch feature are on offer on all four windows and driver panel as well. Speedo also continues with the same issue of fonts. However, it does come loaded with eco meter which tells you how much money you saved along with other fuel-efficiency parameters. Navigation, Bluetooth streaming and settings can be controlled once the car is not moving. 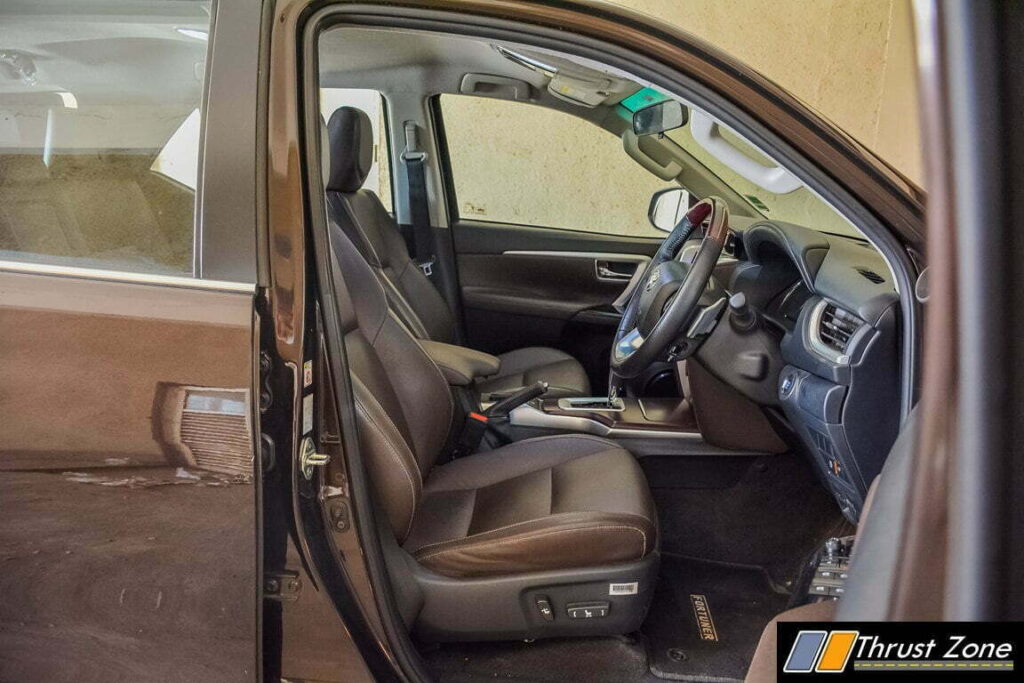 Shocking omission of the auto dimming IRVM along with the same treatment for ORVM’s is also expected at this price point. Climate controls, rear ac vents and controls for the same can be found on the roof and can be controlled through the main panel as well. Steering mounted controls, cruise control, electric ORVM’s, power tail gate, LED on high and low beam, halogen fog lamps are on offer. When you open the driver doors it doesn’t unlock all doors, this is either costing cutting or safety feature, it is upto the customer to decide. As it can be irritating for most drivers. 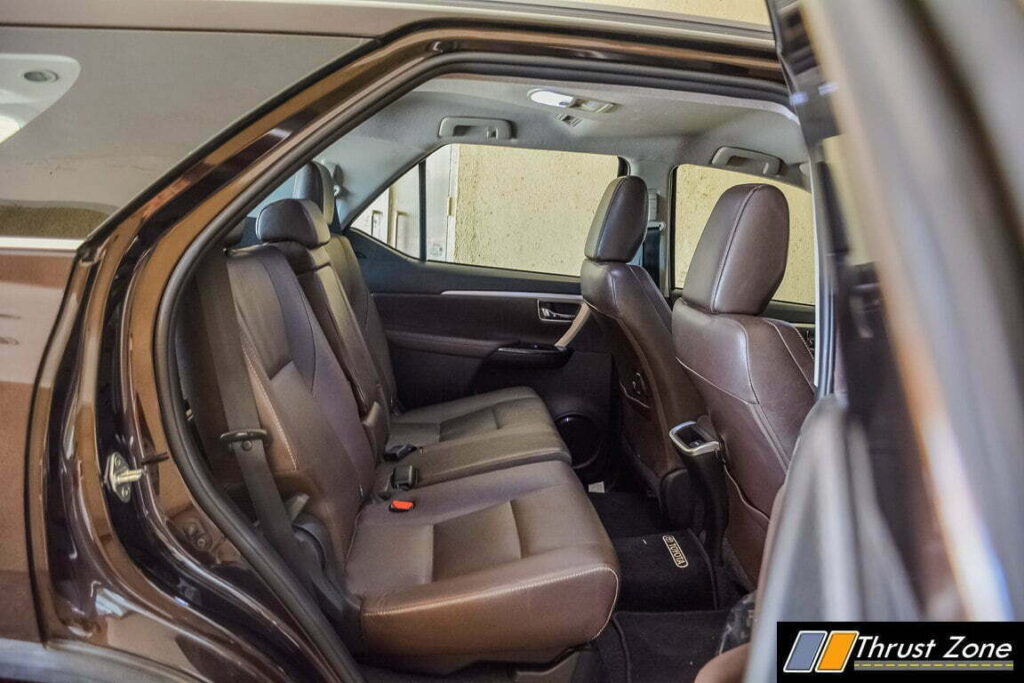 Leather seats are great but they could have been more supportive. Driver side only gets power option though. Space in all three rows is very impressive and you still get a good amount of boot space with all of them up. Front seats offer decent comfort, middle seats have more than adequate space in every area and it come with an armrest with cup holders. A/C chills well but could have been better. This could be also because the temperatures are soaring in the country. 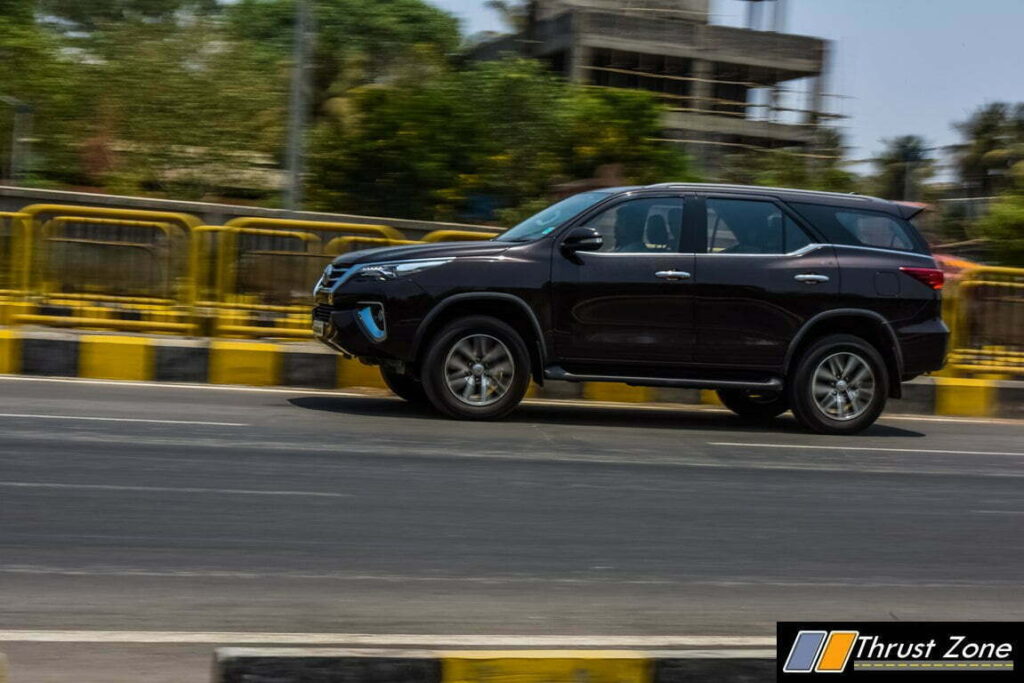 There is a new 2.8 litre engine instead of the 3.0 litre motor. The engine now makes more power and torque than before. The 178 PS of power and 420 Nm of torque are far more superior than before. The turbo-diesel motor with an inter-cooler isn’t great on NVH levels. There is a constant vibration inside the cabin at idle which can be felt and isn’t expected at all from the car of this size. Engine noise creeps to a certain extent but not by a huge margin while accelerating. However, while cruising and accelerating normally, there isn’t much noise inside the cabin. 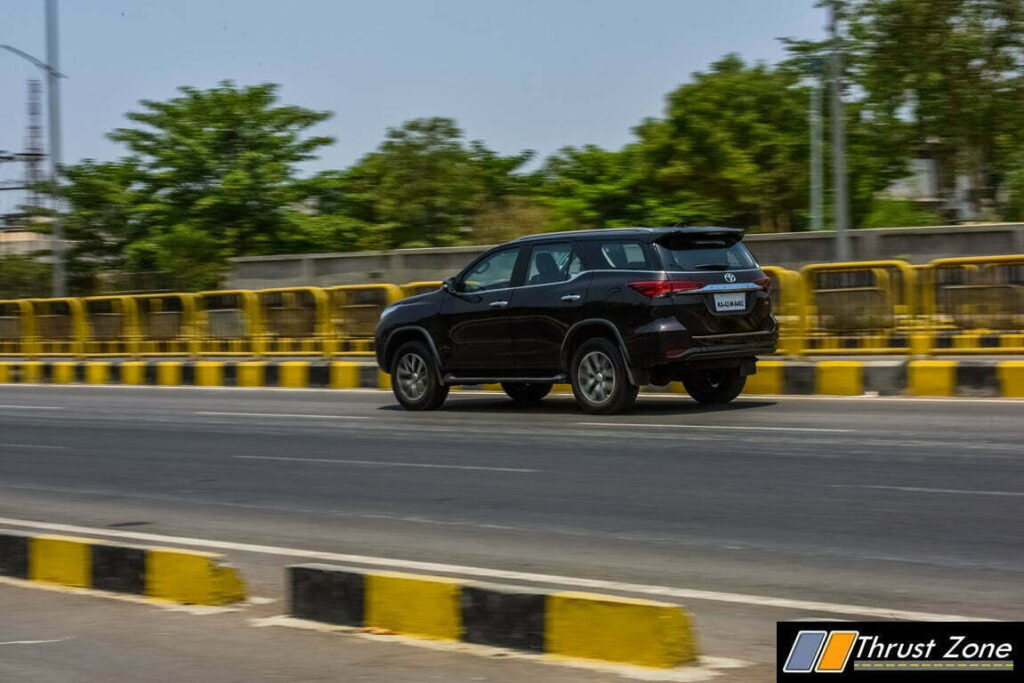 The gear gearbox comes with paddle shifters and is a 6-speed sequential unit which is almost seamless but isn’t quick enough to upshift of downshift. Along with a bit of turbo lag, driveability is still surprisingly good if you are not in an urgency. There is always enough overtaking power on the highway and the top speed is a true 175 km/hr. Motor is quite smooth though and free revving all the way till the redline. Performance numbers are mediocre as we got the 0-100 km/hr done in 13.46 seconds. This was done when the engine was in power mode and gearbox was shifted in sports mode. We got a surprisingly good number in fuel-efficiency in our 800 km test of 14.37 km/l, which is very impressive indeed and includes 50% highway and 50% city. 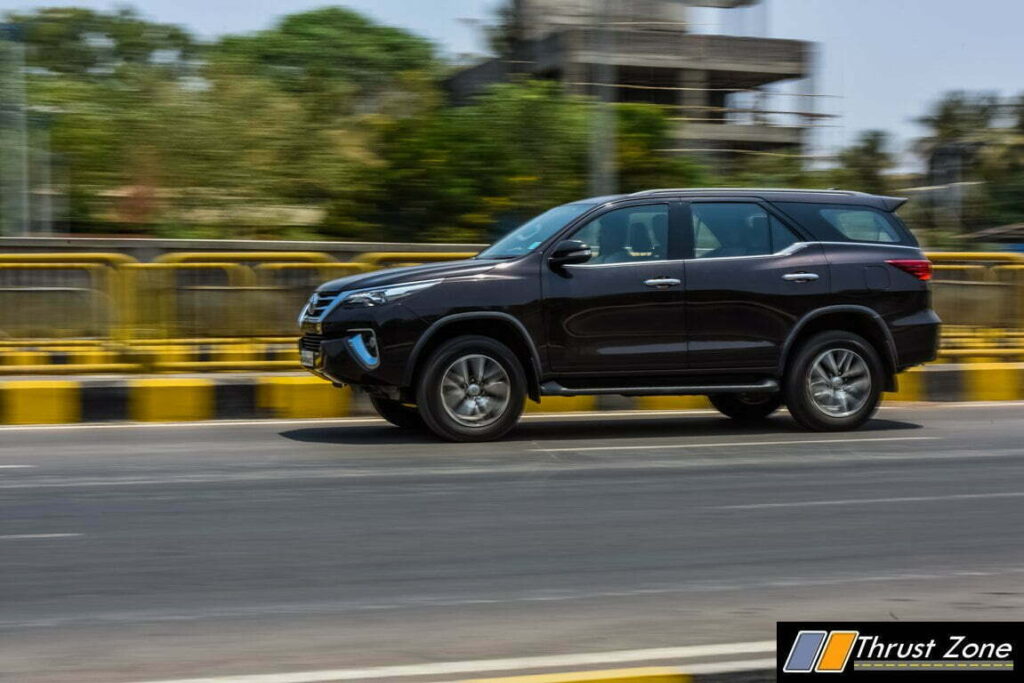 Dynamically, the suspension and the chassis has been revised. Toyota continues to offer roll and pitch control which helps make things more comfort and less bouncy and offer less body roll at any given speed and road condition. This time, with physical and electronic changes to the chassis, the car handling is quite good, body roll has reduced considerably and the car changes direction quickly and effortlessly. However, the downside is the downright stiff ride quality which is felt inside the cabin. 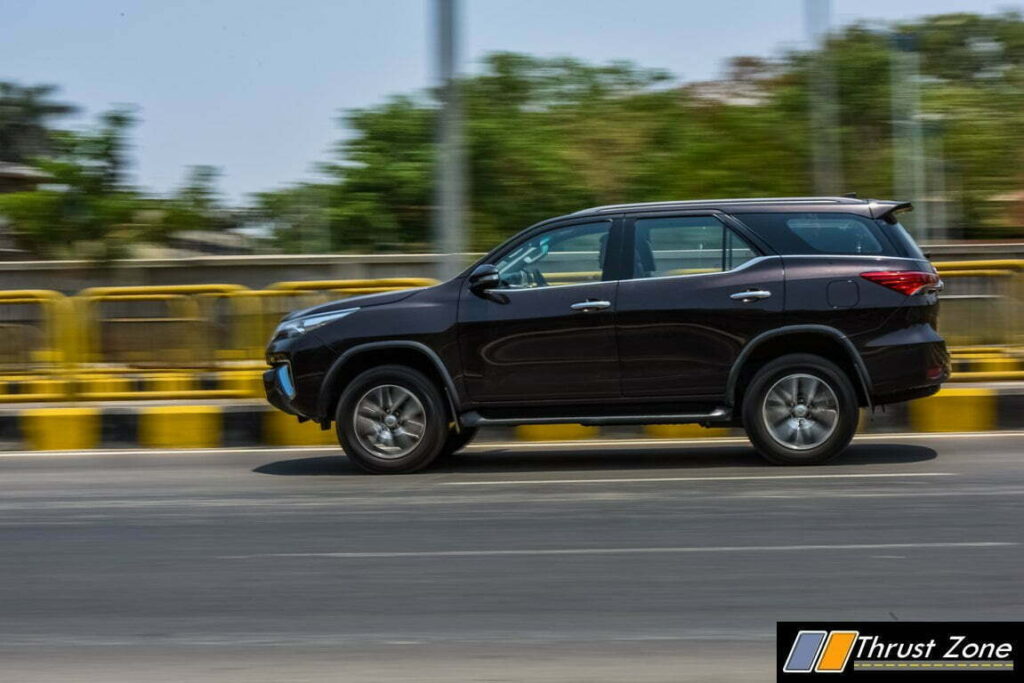 We rechecked tyre pressure for the same and found it to be lower instead of higher which causes harsh ride quality. Steering is quite precise, but it doesn’t get heavy at higher speeds nor does it provide feedback in large quantity. It does feel a bit heavy at parking speeds thanks to the high weight feel of the steering wheel itself.

Brakes are finally all disc brakes all around and with less initial bite and enough stopping power, the SUV does stop well on time. Tyres on our test car screeched even at 10 km/hr all the way till very high speeds while taking corners enthusiastically. Grip level are adequate as you find yourself at speeds higher than expected while cornering in the first place. Overall, a major leap but the ride quality can be a deal breaker for enthusiasts. 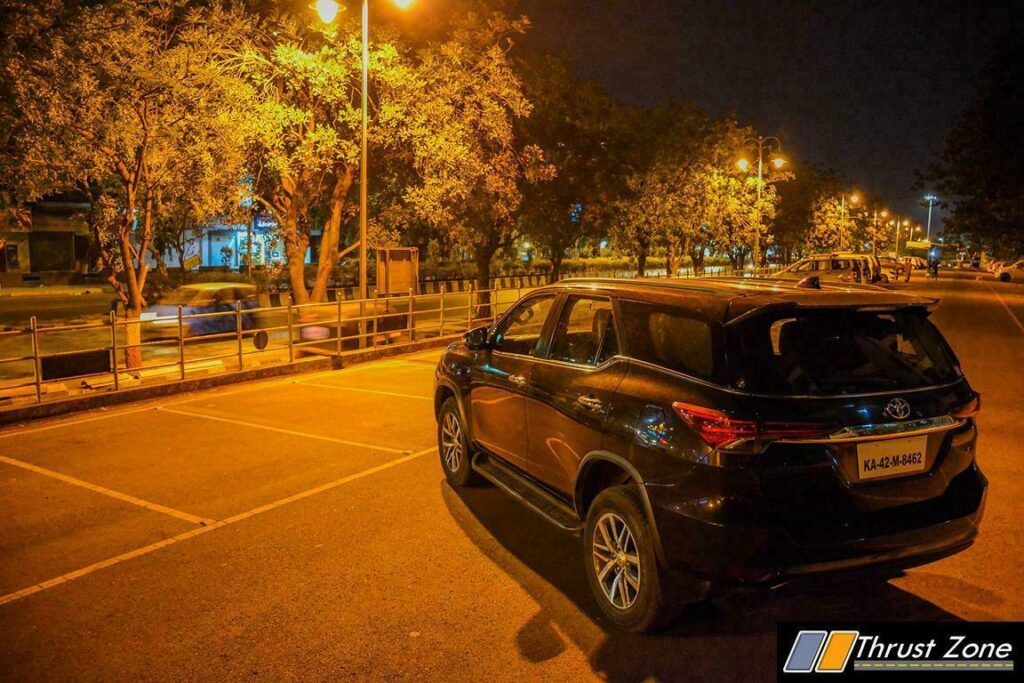 Fortuner as seen above, has its plus and minus point. The design is a big plus, while the ride quality, bits of interior and missing features can put enthusiastic buyers off. There is always its new rival which is far more sophisticated can attract those set of buyers. However, Toyota Fortuner’s residual value, bullet proof reliability, a design can make people take decisions immediately and massive road presence with cheap and cheerful service on offer, the Fortuner will remain the king of segment once again as it continues to be a far more proven and safer package for people who are looking for a butch SUV.