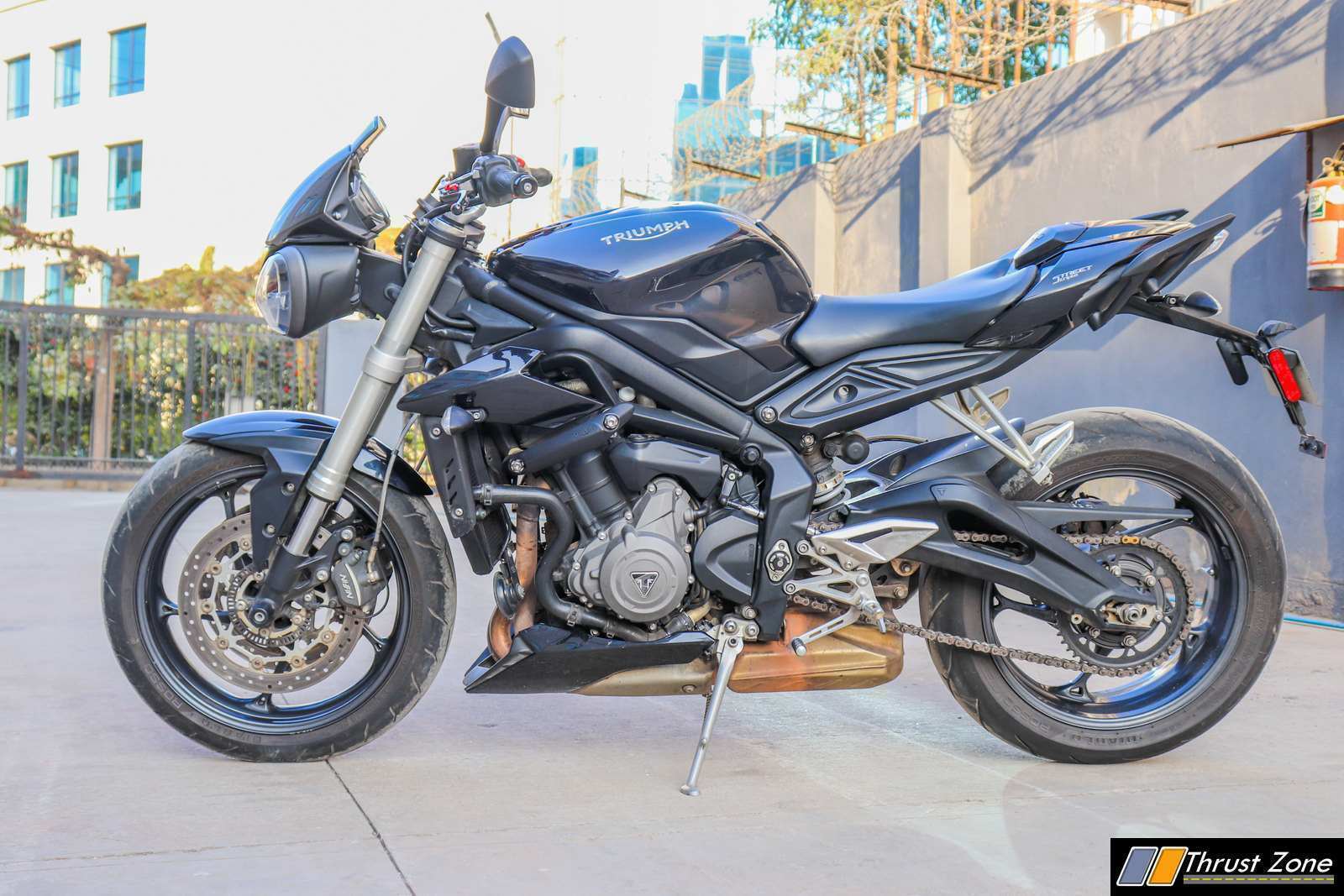 The Triumph Street Triple has always been one bike that seemed to be a perfect fit for India. Thus no wonder, when it arrived for the first time officially to our shores a couple or so years ago, we were all fairly excited. The bike didn’t let down, it handled pretty well, looked good, the build quality was great, however, it wasn’t exactly priced perfectly and then there was the fact of it feeling down on power which was later proved through the ARAI numbers that leaked out. But then, all of it was in the past and today we finally had the new 2017 Triumph Street Triple S (not exactly brand new, but still) to ride and figure out if the latest iteration is any better than the old one or not. 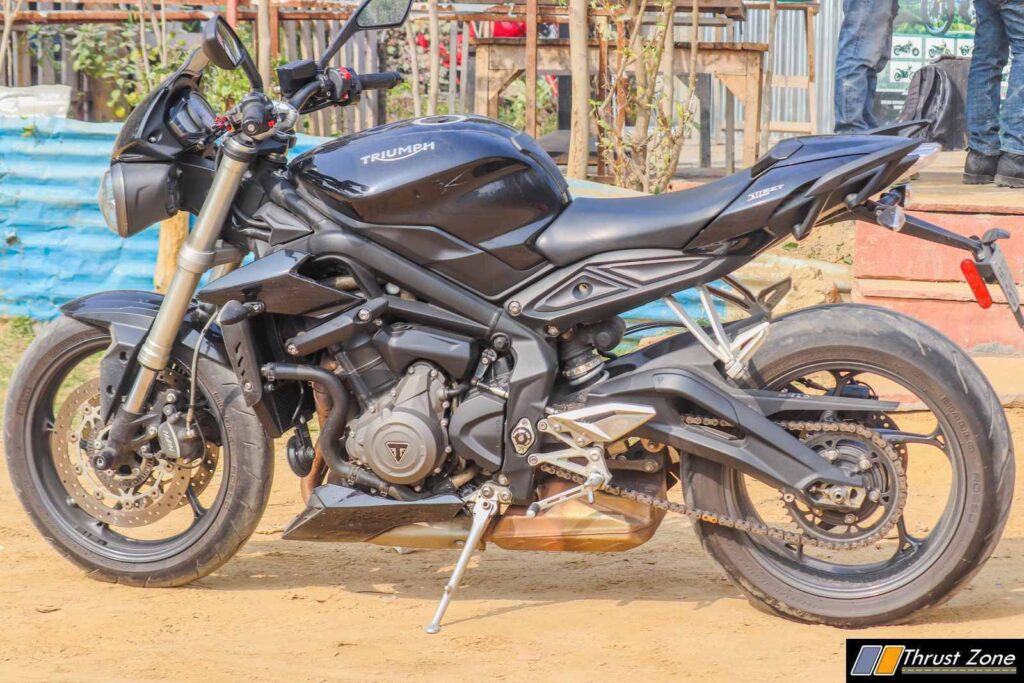 The bug-eyed front end of the Triumph nakeds has been a source of many debates already, however it is still the undeniably Triumph thing that separates the bike apart from its competition. Also, over the years Triumph has managed to evolve the design rather well. That said, our test bikes black shade didn’t really do justice to the bikes appeal or curves. The headlights are now from the Speed Triple, the elder more anti-social sibling of the family. They look perfect to the still lean and low design of the Street Triple. The flatter tank along with the seats that offer enough width makes the bikes look big, but once you sit on it you realize that it is still a pretty compact and flick friendly motorcycle. 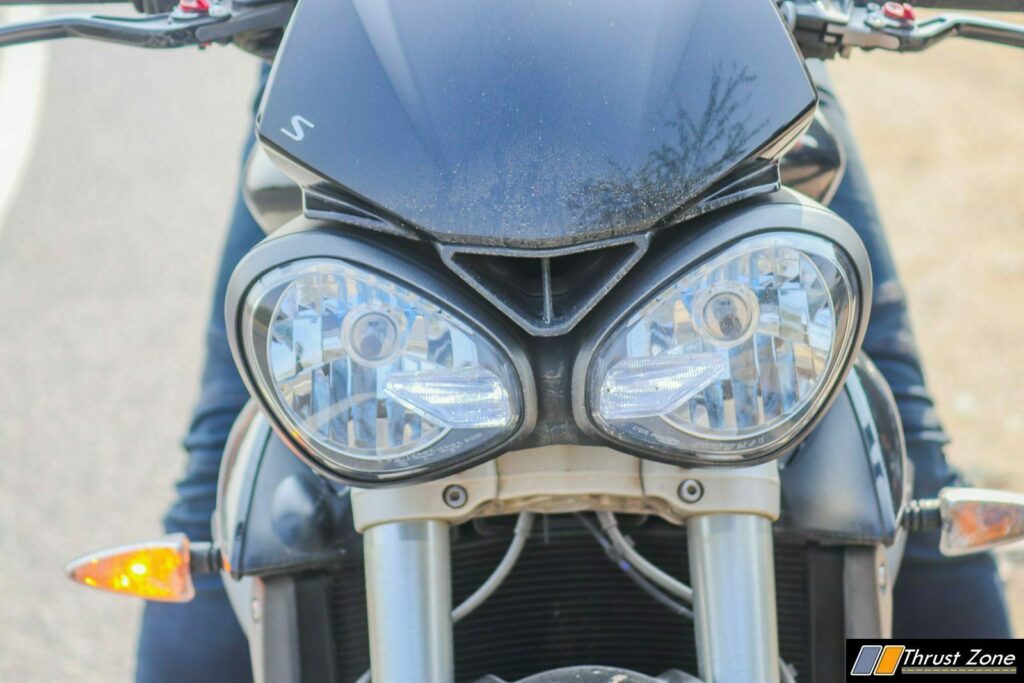 Another thing worth mentioning is the borderline obsession of Triumph to basically brand every single part of the bike in its name. Even in the cramp-fest of spots, you will see the Triumph logo telling you exactly from where the bike came from. Interest, also, something I for one wasn’t a great fan of. As for build quality, it is as good as the older bike, if not better, but then, it is built to last a lifetime isn’t exactly what it felt like. 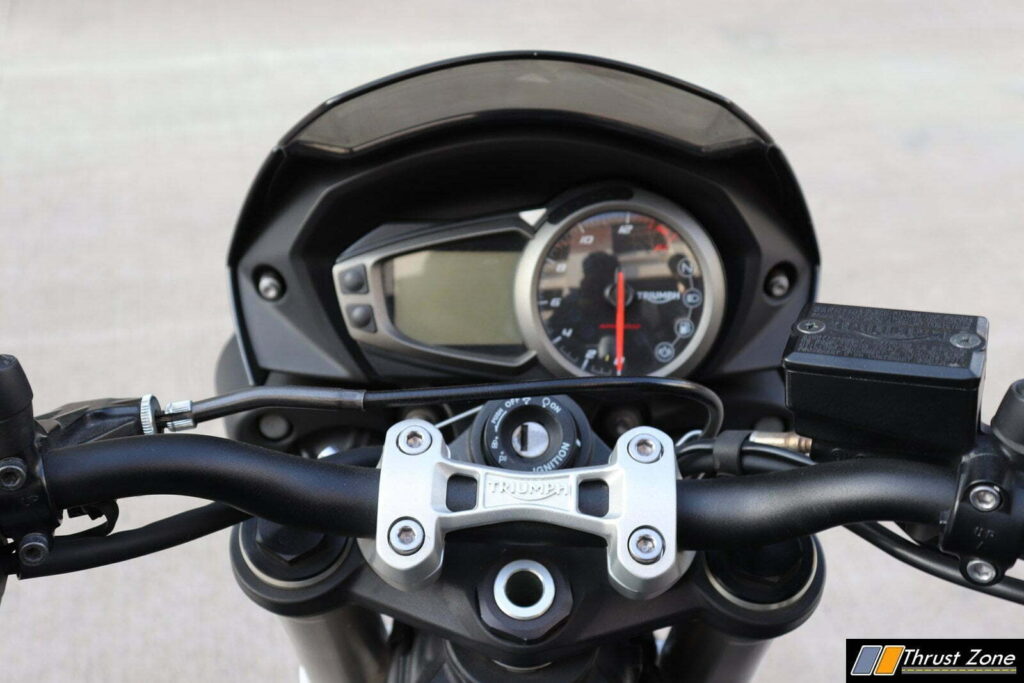 However, this being a media bike, it clearly was showing signs of abuse, for a single owner, it would fare much better I presume. The meter console was simple, and in fact too bland if you happen to glance over any of the RS models at the dealership. The console has a semi digital-analogue design that now serves a much wider range of data for you to consume such as fuel level, real-time fuel efficiency, range, odometer, trip meter, tiny space for the ride modes, among others. On ergo front, the Street Triple S could have been absolutely perfect, however, some annoying titbits prevent it to be downright spectacular. First the good bits, the seat is wide and the footpegs are small and much towards the inside of the bike, much like a tracking tool, clearly I liked it. The seat itself is wide and offers enough surface area, in fact, my more than required dorsal dimensions still were in proper comfort thanks to the seat. Since the bike is narrow and has a wider seat, your feet are always placed princely to lean-in and lean-out of the corner and it does work wonders for the overall riding experience of the bike.

Now off to the really disappointing parts, the normal tell-tale buttons, no matter how hard I tried, they were always a stretch for my thumb and fingers. It is quite strange and unnerving, especially when you need to use that meek horn or to just use the indicator button, everything is a stretch. It is something very similar to what I faced with the Bobber when I tested it, however, this time around, at least the accessory brake and clutch levers were much better in terms of reach and feel. 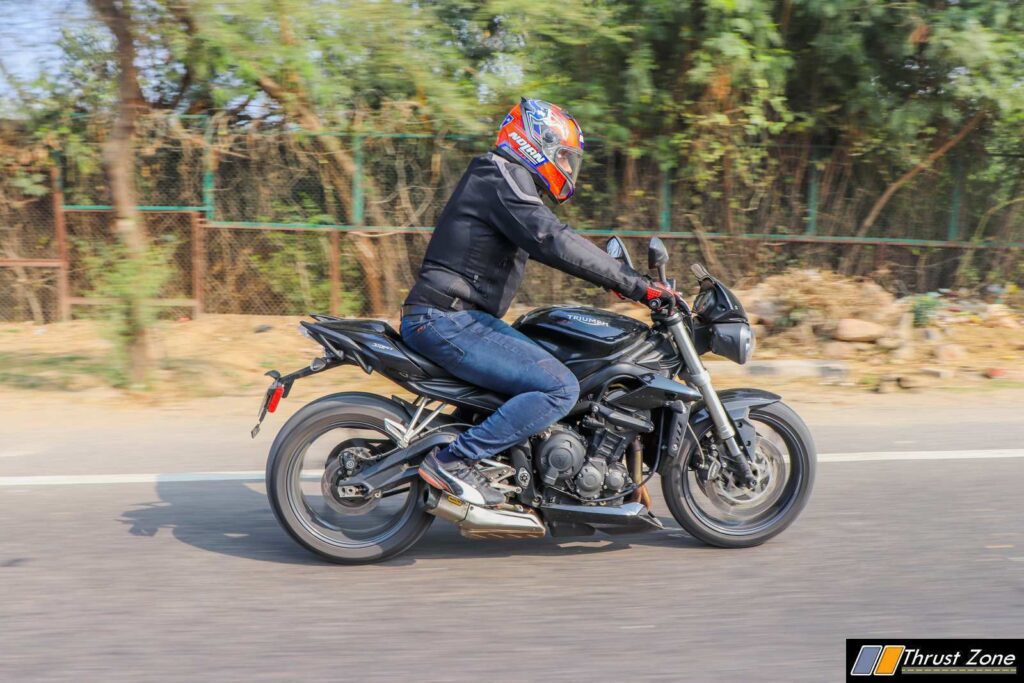 Speaking of unnerving, by far, the seats that are fabulously comfortable are also (sadly) the most disappointing part of the entire package. Again. It might be due to long roughed up torture to the media bike, but there was no grip on the seat. Whenever you brake hard especially while trying to enter a corner, you would slide further and further until you are almost on to the tank. This was not only hugely irritating but also really disturbing as it made me think about it more than making the corner correctly. 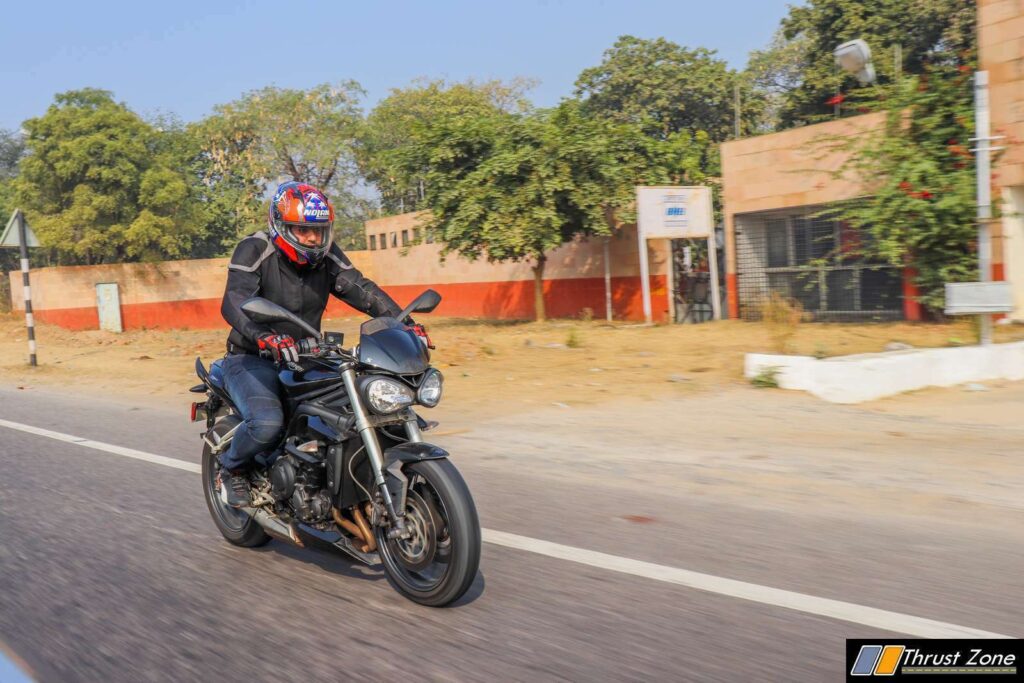 All the ergonomic nuisances aside, the Triumph Street Triple S is an absolute hoot to ride. The 765cc 3-cylinder engine is the one derived from the erstwhile Daytona but has a slightly bigger bore and stroke. Triumph says that this new engine makes 40% more power and 30% more torque, and that shows when the bike just goes absolutely berserk, especially after 3500-4000rpm while there is a step into another dimension when the needle crosses the 6000rpm mark. The new inline triple is sweet and smooth throughout the rev range while making around a maximum power of 111bhp at a peaky 11250rpm and a peak torque rating of 73Nm that too arrives high up at around 10421rpm. Now, the gearbox, well, there is no other way to say it, it was not in good condition at all. To be precise, the bike just didn’t want to slot into the first cog and all you could do was to kick it as hard as you can and hope it has slotted into its place. That said, something this badly mismatched can only be due to the torture this bike had gone through. The good thing was, except for the first horrid gear selector, every other of the 6 gears was delightfully good. The braking was ok until you ride something like a Ducati Monster and are reminded that this price point commands a great braking setup. Period. 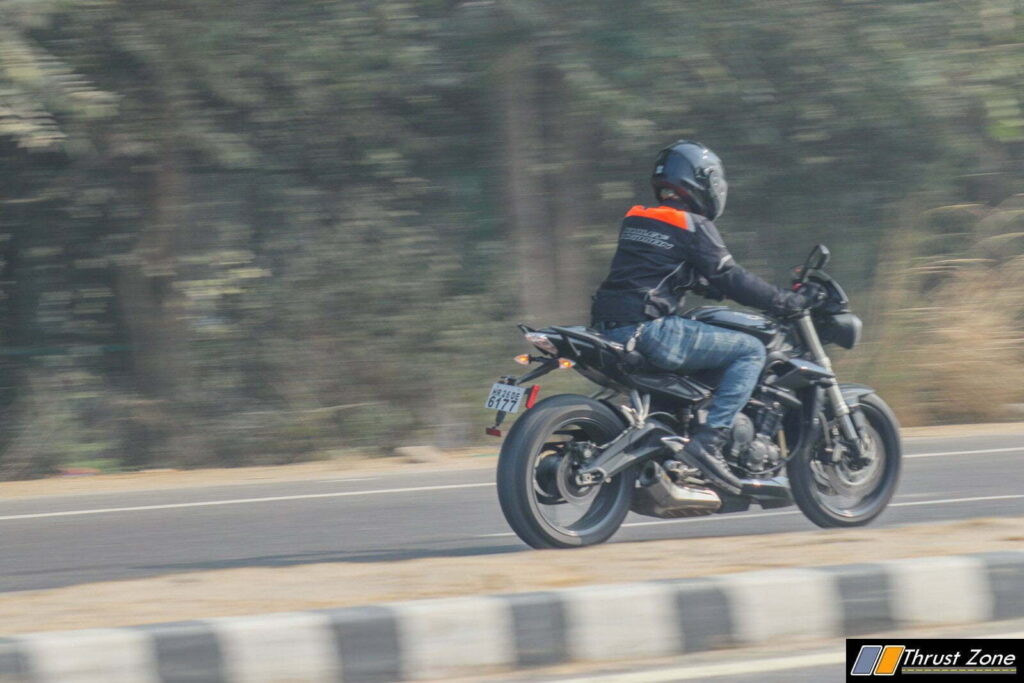 The two ride modes work nicely, and I did ride the Striple flat out in rain mode under thick smog Delhi is known for and came out impressed, newer riders would really as a great to live with. The Road mode is fun and rev happy, but somehow the Bike shudders and stalls in third gear even at the slightest hint of speed decrease. However, if you get acquainted with this kink, it is easy to get the bike to as low as 30kmph in top gear. 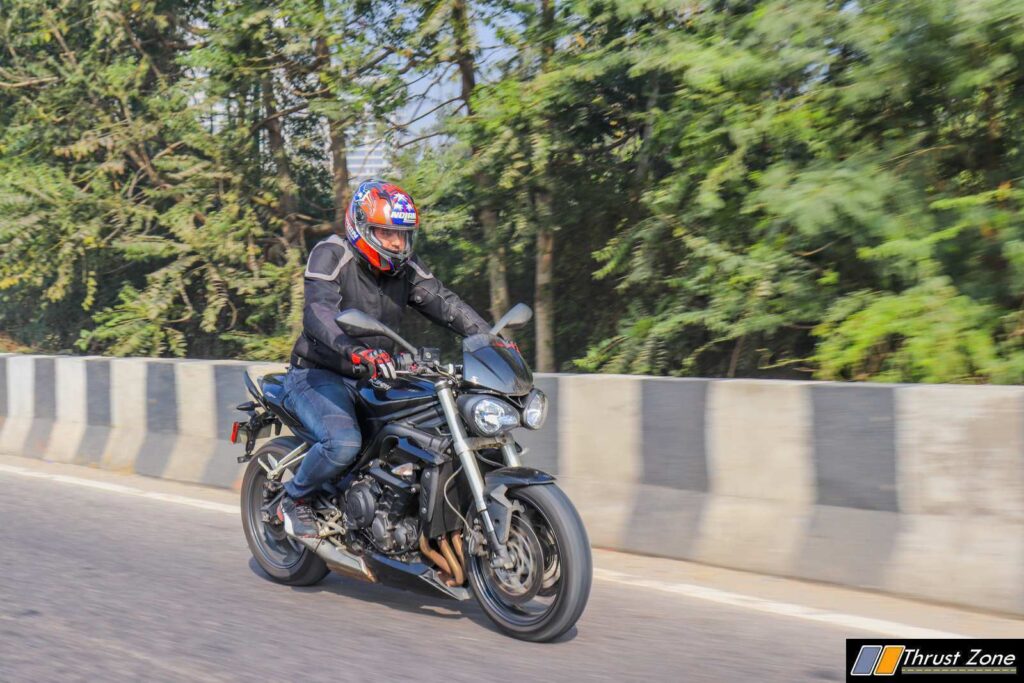 The Street Triple S does behave rather surprisingly well in peak traffic situations And when you get to leave all that traffic behind, that mesmerizing symphony of the accessory Arrow exhaust makes your grin wider, the throttle itself opens to its widest limits until some Alto driver tries to see it splitting lane and being slow on them can kill a rider. The thing is, an accessory Arrow exhaust on a Triumph motorcycle is not an option, it is a mandate since the two, Arrow and the inline three motor are a matchless combination.

The engine performance and the aural delight of the Arrow unit make you want to keep on pushing your talent and bravery on these Indian roads. Good thing is, the chassis is more than capable of handling all of that and much more. The handling is almost intuitive and the bike never surprises you, in fact, of all the better handling characteristics the Monster has a better handling characteristic than it, and that too by a small margin. You are never short of the grip and are always aware of what the front end is up to. I had hoped the Showa SFF’s at the front would be as well sorted out as on the Versys, but, understandably they are tuned towards a much sportier riding style and they do not disappoint on that front. That said, the bike does get unsettled in potholes more than it should have. 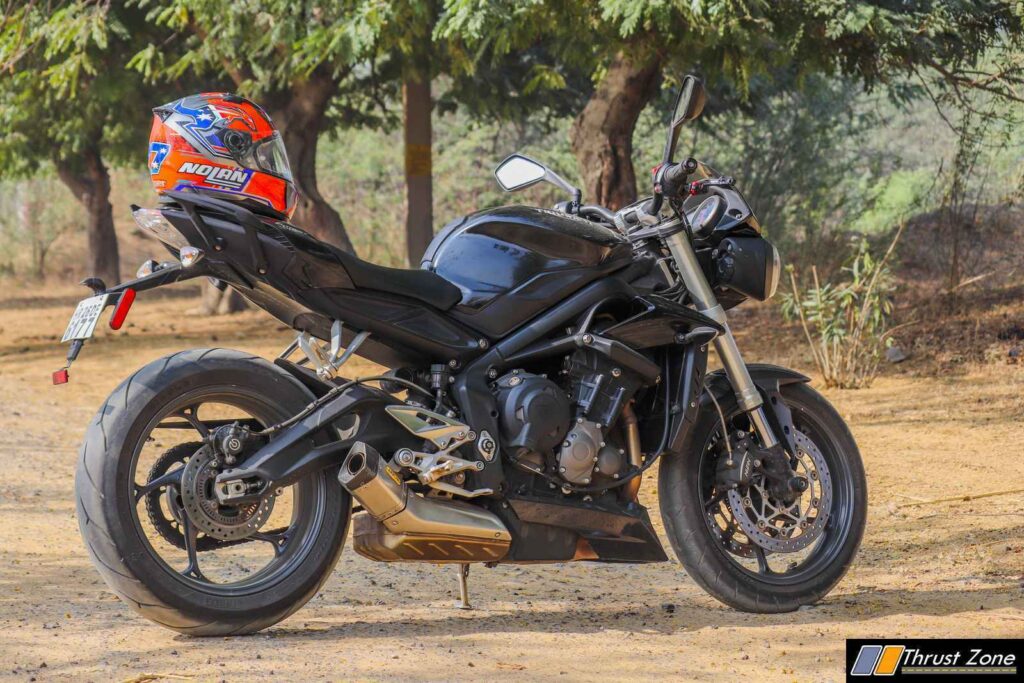 It has to be among the most sorted sports nakeds for the country without a doubt. It was the looks to grab attention, it has a decent build, sounds insane with the Arrow exhaust and handles beautifully. However, at INR 8.50 Lakhs for Delhi Ex-Showroom, it isn’t cheap by any margin. Also, the one I rode was with accessory exhaust and accessory levers along with a few more add on’s, which mean if you don’t have negotiation talents of an extortionist, you will end up paying a hefty amount for them as well. Then there is a fact of the Kawasaki Z900 on one side and the Ducati Monster 797 (on pricing at least) on the other hand. This makes me wonder if the RS version suddenly makes more sense now.