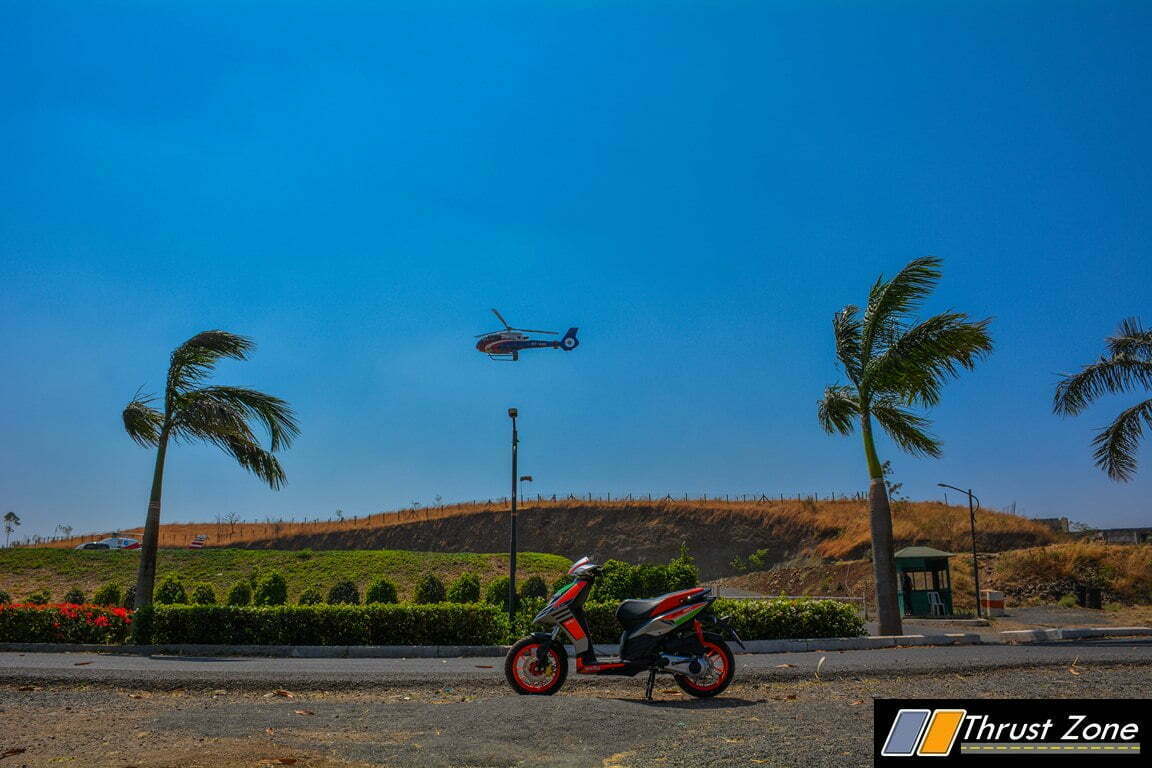 It was the year 2016 when the Aprilia brand ventured into the scooter making business. The potent Vespa was used and its engine was the donor for the Aprilia SR150 which was the perfect combination. The Aprilia SR150 had underbone chassis which makes things affordable and lighter and hence making it the sportiest scooter to ride.

Needless to say, the design also worked in its favor and hence the SR150 sells in very high volumes and is become the best selling premium scooter beating its own Vespa brand in the game. Last week, Aprilia announced the SR150 Race version which was said to be tuned slightly to make things more efficient and performance oriented. We have just ridden the SR150 Race and we find out if the changes are noteworthy or not. 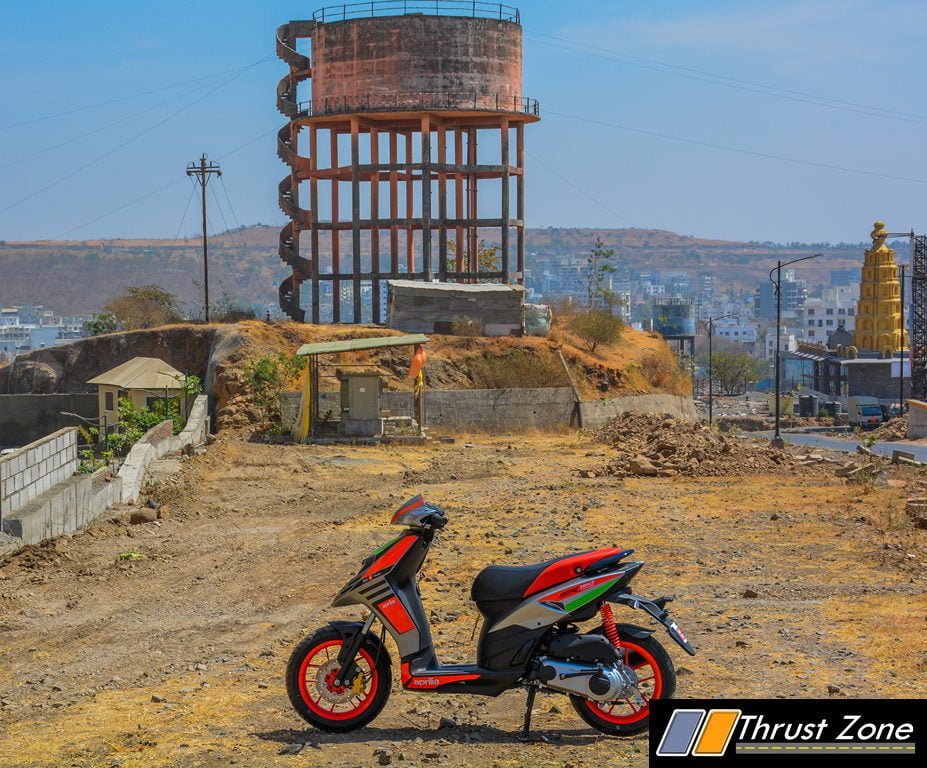 Styling wise we can see a major changes thanks to the decals and colors used. The MotoGP inspired graphics, the red and green decals used all over along with silver color used in the background makes it stand out than before. The wheels are now red and so is the side mounted shock. The overall look has changed and it did grab a lot of attention during testing. The SR150 Race got eyeballs turnings even in the less populated area we took it to experience it.  The same beak at the front, twin headlights and rather simple tail-lamp continue to be on offer. 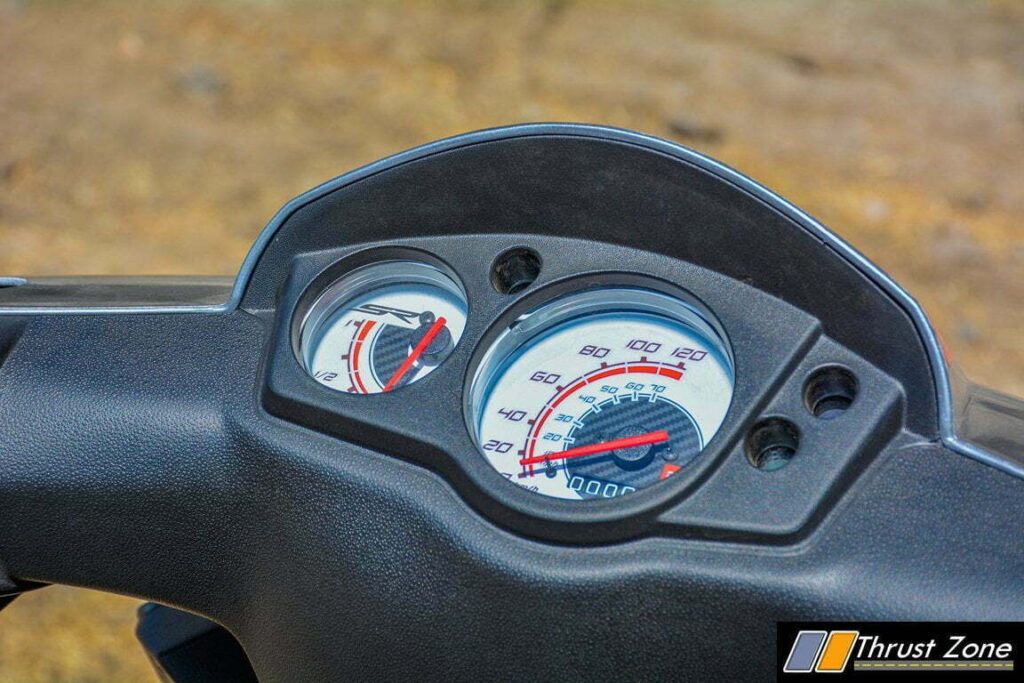 Switches remain the same and so does the plain vanilla speedometer with no features whatsoever. The fuel gauge is just another dial and that’s about it. However, it does offer a pass light switch like the TVS Jupiter which makes thing easier on this performance scooter. Ergonomically the scooter has just about enough seat base to accommodate big riders, upright riding position, slightly lower placed handlebars to make things sportier. Practicality continues to be on the lower side with very little underseat storage, a narrow floorboard and rear seat which is fine for a super model, not a plus size person. 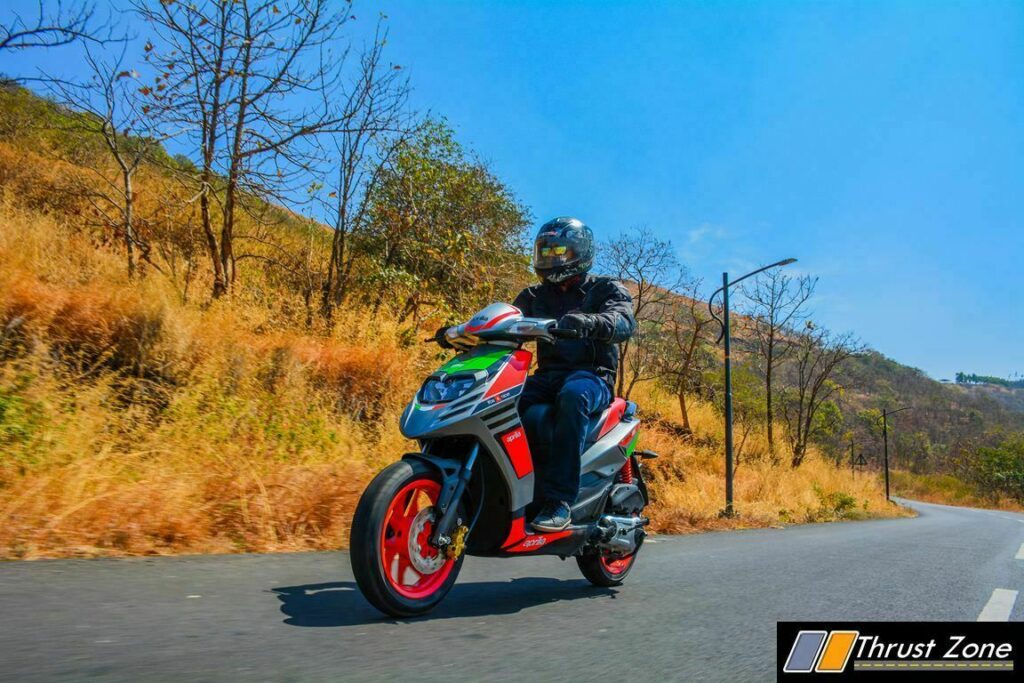 When it comes to performance, Aprilia says the CVT has been tweaked heavily to make sure the scooter provides better low-end torque, which was a bit of a criticism from the scooter despite the fact this is the fastest, quickest accelerating scooter in the country. The CVT does feel different and there is more thrust from 30-50 km/hr than before. We expected it to be 0-30 km/hr which remains similar to what it was before. The changes are not extremely apparent, but they are there and make things easier for riders.

We expected a bit more, but we will have to wait for the race kit which includes a race exhaust and other kits which takes thing to the next level. Something the company says it plans to get very soon. The engine specs are different than what was claimed earlier. The motor makes more torque than before but the power number now stands at 10.6 BHP and torque is 11.6 Nm. 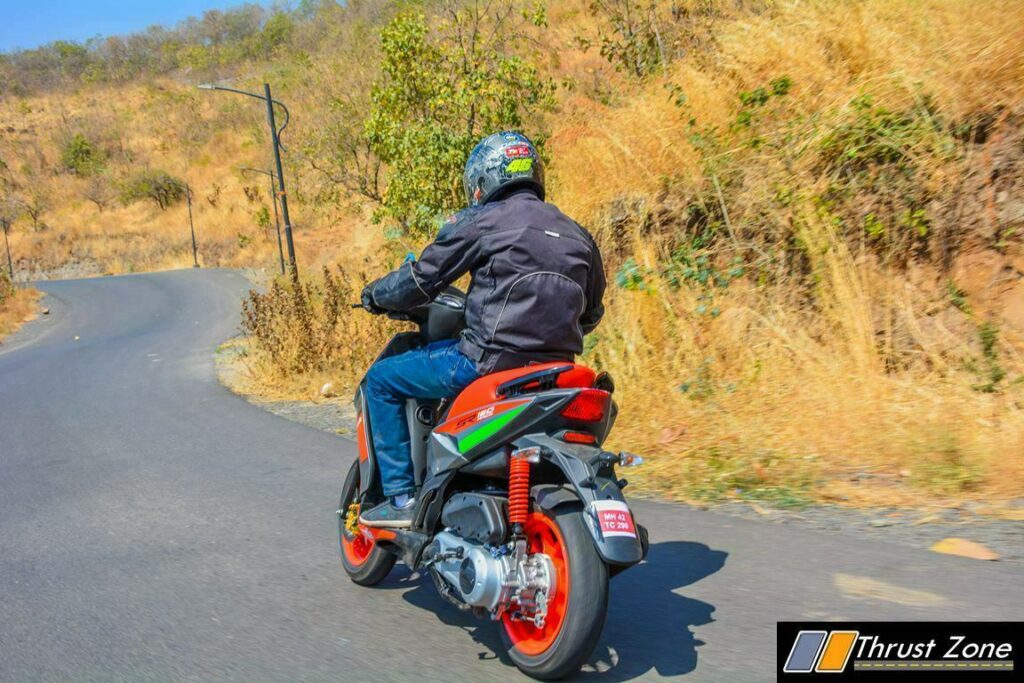 Scooter continues to pull 60 km/hr to 90 km/hr in a smooth and a very fast pace no matter whatever the road conditions, sea level is. The SR150 Race is one of those scooters who can do 70 km/hr on a incline and that is so effortlessly that it almost fulfills at the performance requirement the scooters enthusiasts always had. On a dead straight, the scooter can do 120 km/hr and that is another highlight of the scooter. As you can see, the mid range and top-end continue to be superior than any other scooter and the Aprilia SR150 in race version too continues to super fun to ride. 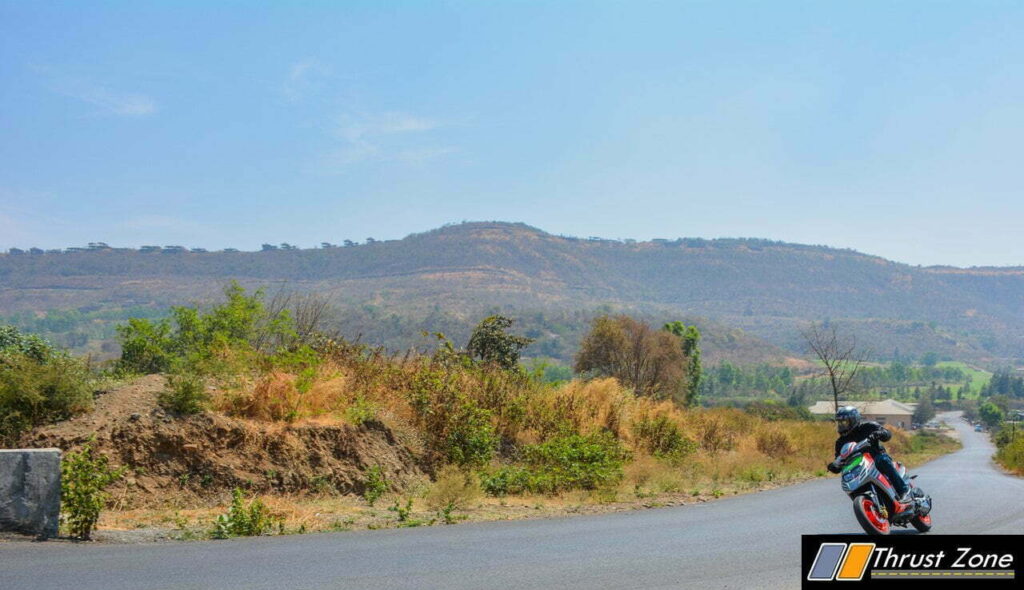 The super fun to ride nature also comes from the finely tuned underbone chassis and suspension. The stiff suspension, the soft compound tyres and superior brakes on both ends makes it the most disciplined scooter in its class on any given road. Be it twisty, straight or even gravel road like we said before. The scooter turns in fast, has superior lean angles that it can boast in a conversation with other fellow riders and continues to take you to the edge of the performance if you keep it pushing to the limit. 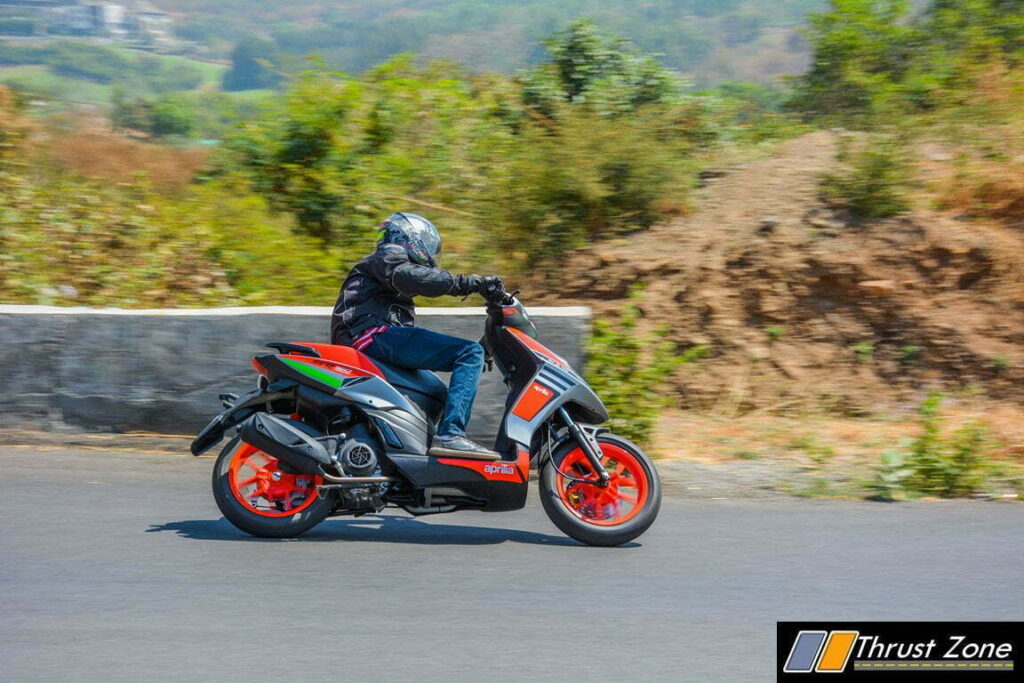 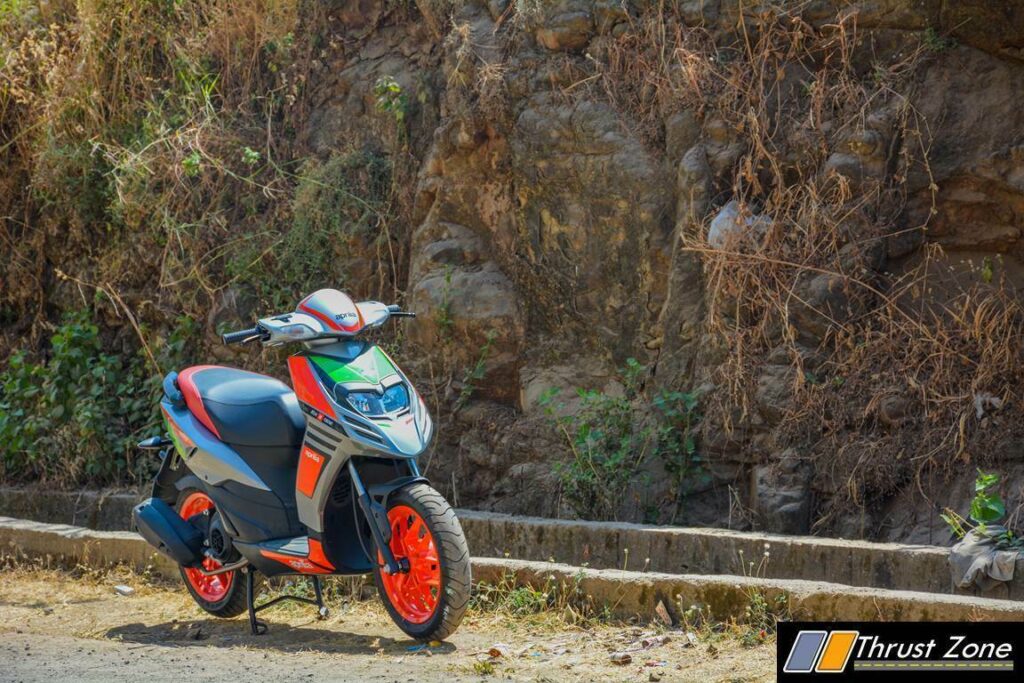 Aprilia SR150 Race Version isn’t exactly miles ahead of what the original scooter was. There is a bump in low-end torque, but will only be noticed by enthusiast. People who will end up riding the SR150 Race before the standard model for the first time will at least not complain of the scooter CVT lag that much and that is what Aprilia brings to the table.

The best just got slightly better and now a proper Race Track version will make things more peachier and we cannot wait for that to happen. For now Aprilia SR150 Race continues to be value for money despite price hike and there is no denying there isn’t anything else in the market which offers this level of excitement while you being slightly laid back at the same time