2017 Chevrolet Tavera Coming Soon, Will Be Produced At Gujarat Plant – SPIED For The First Time

Contrary to rumors, Gujarat Halol facility will continue to till March 2017 and will also roll out the new 2017 Chevrolet Tavera which has been spied today

Chevrolet India is finally on an aggressive streak to make sure that they succeed with their products in India. Plans include to re-organize everything, churn out new models, update old models and increase visibility in every way. The main strategy of GM was to shut the Gujarat plant for and invest One Billion Dollars in the Maharashtra Plant to increase capability, engineering, production and overall invest in every sector to make sure the Indian scene grows as fast as it can.

Part of the plan was to shut the Gujarat facility and concentrate completely on Maharashtra plant was announced. However, rumors began saying that the plant is shutting down very soon and it won’t last longer than couple of months. The GM new statements suggest that it is not going to happen that way. The Halol facility will continue to run till March 2017 and will also produce an upgraded product, which is going to be the 2017 Chevrolet Tavera. Halol facility won’t be shut down but it will be given for sale and continues production of Tavera and its popularity in the local region does not end.

Today, we finally have the first look at the 2017 Tavera being tested on the Mumbai-Pune Expressway. The windshield suggest that the cars are ‘ON TEST’. The car has Gujarat test plates where the Tavera is being built. There are hardly any changes to the car we expect it to comply to all safety and emission norms that are coming in shortly. Despite the fact that the car is eligible to change till 2018-2019 as it is a previously launched vehicle. We expect new interiors, revised engine, a premium version of the car, 7-8 and seater options along with a revised pricing for the MPV. The ladder on frame chassis will continue and the engine will be the same 2.5 litre which could produce more power over the 73.5 PS and 171 Nm of torque that it currently has.

After launching a facelift couple of years back known as the Neo 3. GM is making sure after updating the Cruze, discontinuing the Captiva, Launching the TrailBlazer, the Tavera should continue from strength to strength. The next step, however, for making the product market successful is launching three new products on the Beat platform. The three products as we know Beat Cross, 2017 All-New Beat and Beat Essentia, the compact sedan. Compact SUV and other products will come soon as well. All these products will get new engines in both fuel types along with manual and automatic gearbox options. 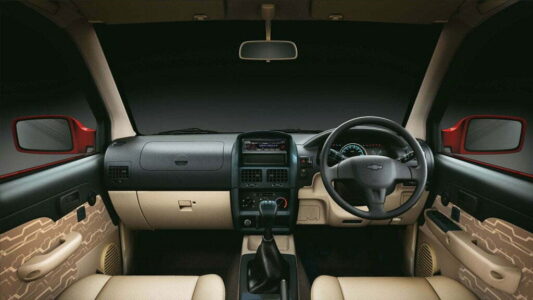 Read this too: LATEST NEWS: ENJOY PRICES GO DOWN BY 2 LAKHS, TRAILBLAZER BY 3 LAKHS

Read this too: TrailBlazer Facelift Unvieled Internationally, all details here