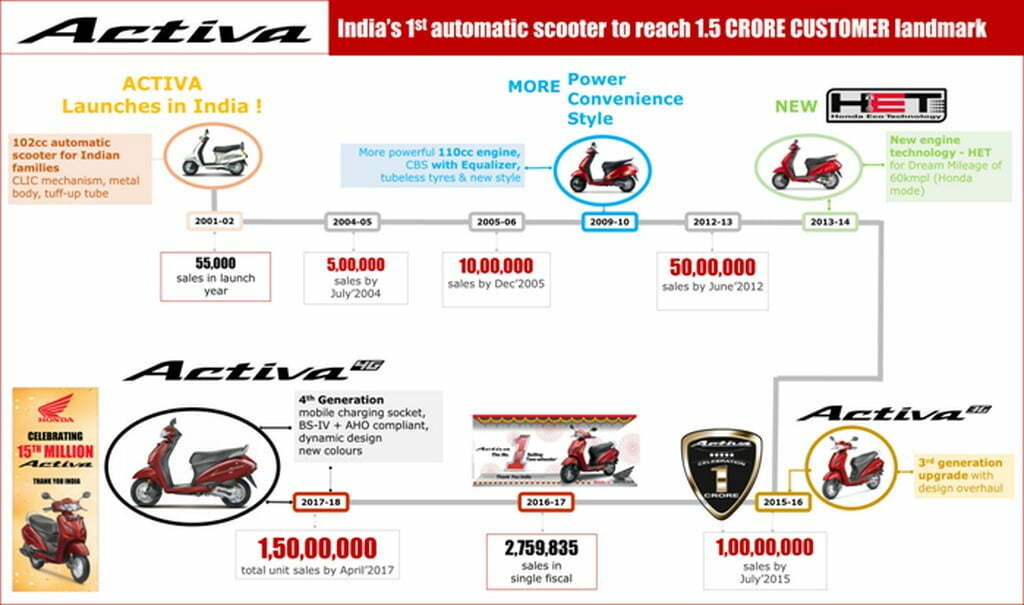 Honda Activa, a name we have seen since the year 2001, Activa sold 55,000 units in its début year. In just 3 years, Activa became the leader in automatic scooter segment. By 2012-13, Activa sales had crossed the 10 lac mark annually but were still behind India’s largest selling two-wheeler (a motorcycle at that time) by a sizable gap of 8.73 lac units. 2017 Honda Activa Sales is different story altogether.

The situation reversed in the next 4 years for HMSI. The activa sales more than doubled from 12.05 lac units in FY’2012-13 to 27.59 lac units in FY’2016-17. For the first time in 17 years, Activa (an automatic scooter) has overtaken all motorcycles to become India’s Number One selling two Wheeler in 2016-17. The big part for HMSI is that it leads by a comfortable margin of 2.09 lac units over its nearest scooter competition.

The secret behind becoming First scooter to make 1.5 crore customer landmark says Honda is technology. Since 2001 itself, Activa was launched with CLIC mechanism, tyres with patented tuff-up tube, full metal body powered by the automatic 102cc engine. In 2009, it became industry’s first scooter to come with Combi-Brake System with Equalizer (nearly a decade before CBS is set to be mandatory in two-wheelers by 2019), a bigger and more powerful 110cc engine, convenience of tubeless tyres and completely new design.

2013 saw Activa getting Honda Eco Technology (HET) which took power and mileage higher. In 2015, the third generation Activa 3G got a proper makeover in terms of design. In 2017 same vehicle got BS-IV and came with convenient mobile charging port. 2017 Honda Activa Sales secret is also the unisex demand that the scooter enjoys and makes it a powerful brand. 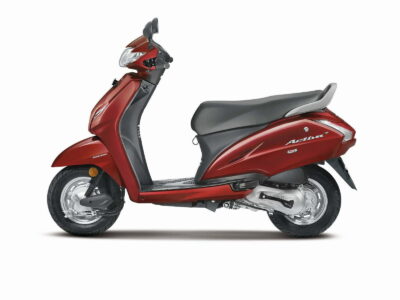 Activa cumulative sales since launch crossed 5 lac mark in 3 years and then Activa’s speed of growth doubled in next one and half years. After that, Activa’s cumulative sales rose to 10 lac units mark by Dec’2005 – with last 5 lac sales added in just half the time when compared to earlier. Then in June 2012, Activa breached the 50th lac cumulative sale milestone. In July 2015, Activa become the first scooter to sell over 1 crore units. While it took 10 years to make the first 50th lac sales, the second 50th lac addition came in 3 years.