While the Japanese haven’t yet relaunched or refreshed their products which go against the KTM motorcycles, the Austrian manufacturer has come up with the second iteration of its popular entry-level motorcycles. One of them is the Duke 390 which continues to be segment leader in performance whether it comes to road or track. Minor issues seem to be have sorted on this motorcycle that has been showcased at EICMA recently. The motorcycle has been finally launched in the country and we have all the details.

A complete overhaul of design can be seen here over the previous motorcycle. The headlight is slimmer and larger than before, the tank is now more sharper and toned than before and it accommodates more fuel as well. There is no tail-piece as the subframe remains exposed. The tail lamps are LED and much larger than before.

The trellis frame, the suspension at the front and rear along with fat tyres that are slapped on orange wheels give the look of substantial, aggressive and focused street-fighter that the world hasn’t seen in this category till date. The LED tail and head-lamps continue to be segment first and look great as well. Exhaust canister makes it to the Indian spec KTM motorcycles. The motorcycle has a larger 13-litre fuel-tank.

Trellis frame which has modified, adjustable front forks and rear monoshock are now part of the list. Tyres are the same as before. 110 section front and 150 section at the rear are seen. We are seeing Michelin tyres on the motorcycle instead of the pricier Metzeler seen in the early version. However, we can see now Metzeler back in action with these new bike here and these are H rated tyres. Brakes are larger at the front which is a 320mm front and 230 mm rear and they are ABS equipped. Motorcycle comes with adjustable brake and clutch levers.

The engine also stays the same as before. We expect more refinement though with this motor. The gearing should be the same as well with subtle changes. The 373cc motor makes 45 BHP of power and most likely 37 Nm of torque. DOHC, 4-valve, fuel injected motor that is be equipped with ride by wire throttle is now an BSIV unit and this motor will make its way in the upcoming Adventure motorcycle.

A loaded instrument cluster allows access to navigation and music that is connected to your phone. There is a new brand new cluster which houses all the tell-tale lights, a large tachometer, speedometer, odometers and various other things such as fuel-efficiency parameters, clock, trip meters and much more is being on offer that will be accessed through buttons mounted on left switch gear. The console seems to look the best highlight of this package as we see can see in the images. 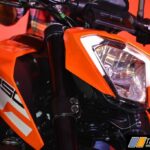 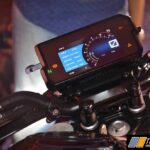 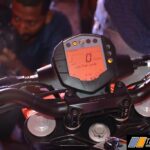 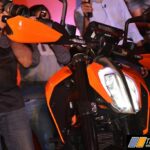 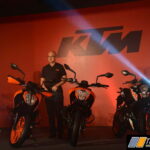 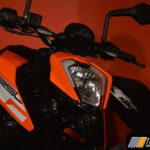 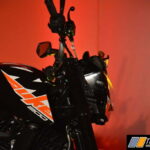 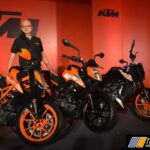