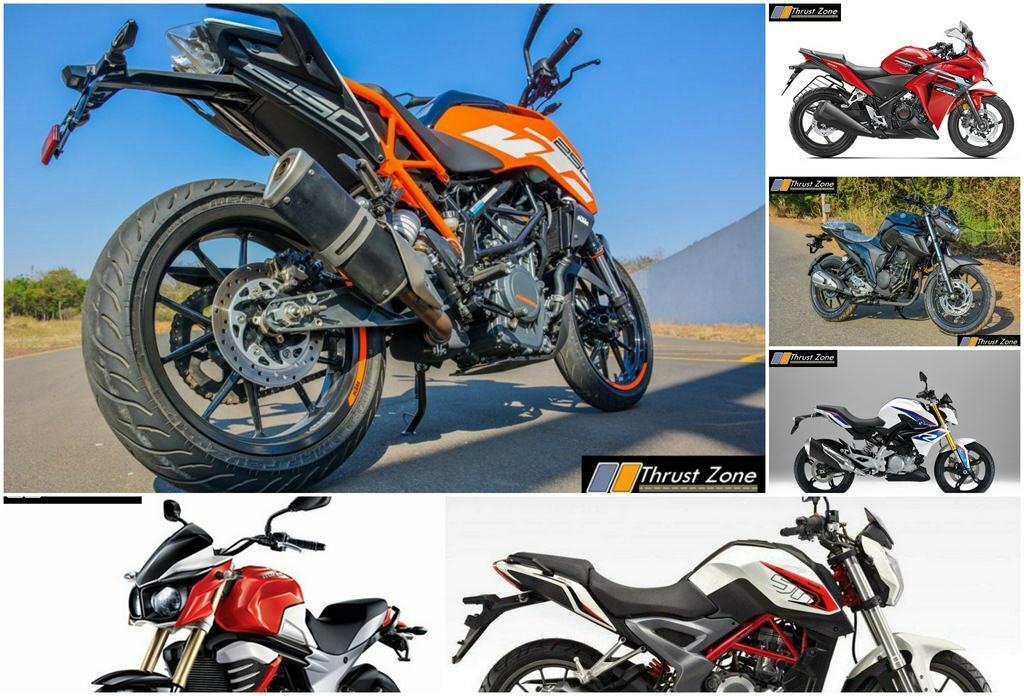 Let’s see how the 2017 KTM Duke 250 fairs against its rivals in the densely contested space.

KTM has a knack of realigning the market it plays in, it did that with the first ‘baby’ Duke’s for the masses in the form of the Duke 200 and Duke 390. Now, to take the game further away from the competition which is barely waking up, KTM India added another scalpel in its range, the recently launched 2017 KTM Duke 250. This new addition to the single cylinder KTM Duke range covers the space bang in middle of the Duke 200 and the Duke 390 and offers much to matter on its own. Clearly the old Duke 200 model still has a lot of mileage left in it and thus it continues to be offered. However, it is the KTM Duke 250 that has got the most attention from the brands followers.

The KTM Duke 250 bring with it styling similar to the bigger Duke 390 which in turn is inspired by the stunning Super Duke 1290. You can read more about how this new KTM Duke 250 faired in our first ride report while we tell you about the bikes it locks horn in the market. We all know that the Duke’s are in a segment of their own and technically no other model can be compared with them, except for the Benelli TNT25. However, at a price tag of Rs. 1.73 lakhs Ex-Showroom New Delhi, the KTM Duke 250 finds itself against a number of bikes in the same price bracket such as, Benelli TNT25, Honda CBR250R ABS, Mahindra Mojo, the recently launched Yamaha FZ25 and the upcoming BMW G310R. 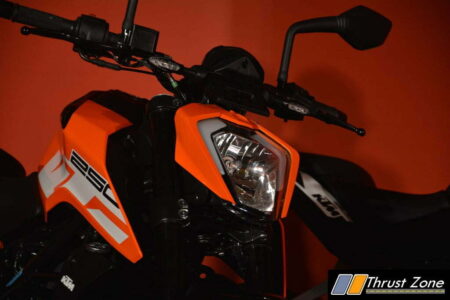 The KTM Duke 250 brings in, by far the most aggressive and striking design in the price segment with its Super Duke 1290 inspired front headlights and edges. Further the Duke 250 has those brilliant looking large tank extensions with big 250 sticker pasted on them. You can also find these stickers below the new Duke 250’s tail-piece. The trellis frame has been painted in black for the Duke 250 however its subframe wears the KTM orange. All in all the new Duke 250 is sharp and aggressive like no other bike in the market right now.

That said, the KTM Duke 250 isn’t the only sharp and stylish bike in the market now, the recently launched Yamaha FZ25 also looks striking and has a very Japanese aggression to it and we really like it. Being India specific model, the FZ25 gets host of design cues from already existent Yamaha models across the globe. However, they all merge into a visually captivating design aided largely by the gorgeous LED headlamp inspired by the M-Slaz. The FZ25 is sleek as against the visual width of the Duke 250. Yamaha has also chosen far subtle paint scheme devoid of any graphics as such, this further accentuates the bikes appeal and is a stark contrast to the Duke’s opulence in graphics and colours. Adding to all this, the FZ25 is almost a new as the Duke 250 and stands on the same level in terms of design with the Duke 250. 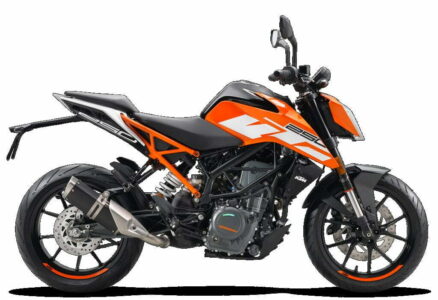 The next bike is the TNT 25, which commands attention with its curves and Italian flair. Yes we know that it is essentially a Chinese owned company, but the true Italian DNA clearly seeps into the entry level Benelli. The bike looks big with the headlight shared with the bigger TNT300 twin. While the rest of the body is leek, we really like the bikes tail section and the beautifully minimal LED tail light. All this along with a rarity factor makes the TNT25 stands amongst the new naked quarters in the segment.

The Upcoming BMW G310R is taking its own sweet time to arrive in our market and we are not sure if it is a good thing. But what we are sure is the fact that the bike definitely looks the part with its premium appeal and fit and finish. The seats look like the most comfortable ones compared to the above three while the big tank and a sleek tail section makes the bike look pretty handsome.

It will holds on its own against the rivals in the segment in terms of its more mature design that will appeal to a larger section of the crowd. The rest, Honda CBR250R ABS and the Mahindra Mojo have been here since a while now and we have talked enough about them already in our previous comparo’s. We would like to ay here that it is high time Honda updates the CBR250R thoroughly, it being the torch bearer of sorts of this segment needs some love from its maker, soon. 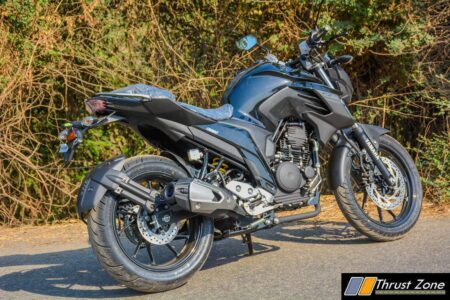 On the feature listing, it is the KTM that literally trounces its rival. The KTM Duke 250 offers the old design with its plethora of data display characteristics. The bike does get new tell-tale lights, fuel efficiency parameters along a slight redesign to the meter console to keep it fresh.  Though sadly the Duke 250 missed on the LED headlight, it does offer AHO and sumptuous LED DRL’s. What the bike also misses is the ABS which is a rather big omission.

The FZ25 on the other hand, arrives with a stunning LED headlight providing pretty good illumination. The rear is also LED, however it looks way too similar to the RT 200 4V tail-light to us.  It also gets the now mandatory AHO along a speedo that looks neat and includes average fuel-efficiency indicator, two trip meter, odometer, clock and a digital speedo and tachometer.

The TNT25 offers a much similar meter console design to the bigger TNT300 and doesn’t offer a lot of data to the rider, however, its big layout means everything is easy to read and we like that. Still, it could offer a bit more modern console, considering how far the competition has gone.

The bike does not feature AHO or LED headlights while also skips on the ABS too. Thus, we reckon that for its price the TNT25 does have a rather skinny feature list. The upcoming BMW G310R is said to be coming with the ABS while there won’t be any LED headlights. It should be offering a LCD console for displaying a lot of data (not as elaborate as the Duke’s though) with easy-to-use controls. Next up is the Mahindra Mojo that offers decent features like lap timer in its console though misses out on the LED headlamps and ABS at present. 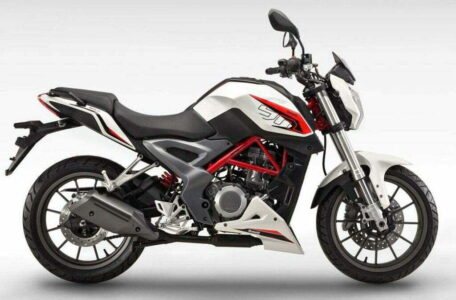 The KTM Duke 250 makes 31bhp and 24Nm to make it one of the most powerful bikes in the price bracket after the BMW G310R that makes 34bhp and 28Nm. None of the Duke 250 rivals in the segment offer slipper clutch keeping the Duke’s at the top of the game. The FZ25 compared against the Duke 250 simply looks powerless with its 20.9bhp and 20Nm on offer. The TNT25 on the other hand fairs much better than the FZ25 by producing 28.16bhp and 21.61Nm. The Mahindra Mojo is next with its 295cc single-cylinder unit making 27bhp and 30Nm. The Honda CBR250R manages 26.15bhp and 22.9Nm from its 250cc single-cylinder unit. However, the Honda is the only bike in this comparo that does offer ABS (BMW G310R is yet to launch) making it still the safest bike among them.

The cheapest bike by a fair margin here is the Yamaha FZ25 with a price tag of Rs. 1.19lakhs. Then the next bikes are the Honda and the Mahindra which both retail at 1.60 Lakhs and INR 1.69 lakhs respectively. Then there is the KTM Duke with its 1.73 lakh price tag followed by the TNT 25 with its 1.80 lakh pricing. The BMW G310R is yet to launch is set to arrive as the most expensive offering in the segment.

This on paper comparison makes it clear that the KTM Duke 250 offers the most value for your money in the segment. It offers the most features while also being among the most powerful as well. However, as is the case with every ‘middle’ model, there are many offering sin the market that have their own virtues and can take the buyer away from the Duke. Till the time BMW G310R arrives, we reckon the Duke 250 is in a very safe place. Also, the Benelli does make a point for itself as an exotic in the comparo and looking the Duke 250 and TNT25, we can certainly say you won’t go too wrong with any of them. And as for the Yamaha, it truly doesn’t belong to this group but is actually a surprisingly good machine. Then there are the proper tourers in the form of the CBR250R and the Mojo and truth be told, the Duke 250 doesn’t hold a candle in terms of touring capabilities against them.