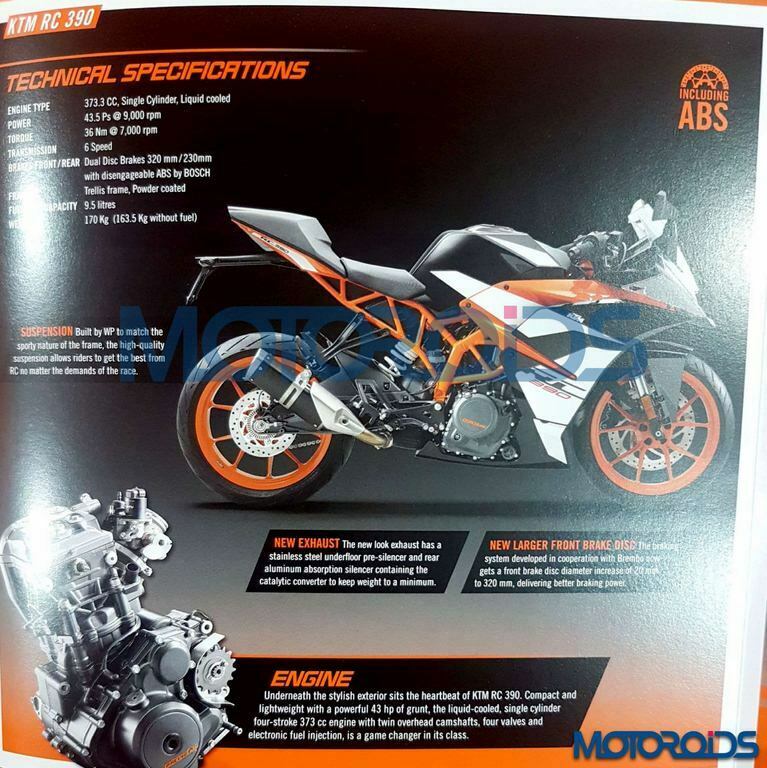 There was news in the air that the new motorcycles from KTM in the year 2017 could come. However, apart from the Duke which are set to come shortly, it looks like the RC 200 and RC 390 will make it to the showrooms first. Based on the existing platform and revised for 2017, the major changes are to the internals and cosmetic changes to make sure government and enthusiast both stay happy. Let’s have a look at the leaked brochures and what they have in store for us.

Both motorcycles stay identical in terms of design and body panels. That means they get projector headlamps, led lights and other similar things seen before. What has changed is the color theme by a huge margin. RC390 has white/black/orange scheme while the RC200 has a white/orange scheme on it. Both bikes do look fresh on the face of it.

Trellis frame, upside down forks, and 320mm new larger front disc brake has been adopted. Monoshock at the rear will continue. RC200 seems to get new set of MRF tyres, RC390 continues with Metzeler tyres. Both motorcycles have seen a slight weight increase over the past. RC390 goes up by 4 kgs, while RC200 stays similar as before.

The RC390 now makes 36 Nm instead of 35 Nm of torque. Power stays the same at 43.5 BHP. RC200 continues to stay identical as before. The engine makes 25 PS of power and 19.2 Nm of torque at identical RPM as before. RC390 is set to get ride by wire, slipper clutch and euro 4 exhaust. RC200 is unlikely to get all of these, but we expect to see ride by wire on it to meet emission norms.

Read this too: SPY VIDEO OF THE KTM DUKE 390 HERE

Read this too: 390 DUKE DETAILED SPY SHOTS AND SPECS HERE!

Read this too: DUKE 390 REVEALED AT EICMA.. ALL THE DETAILS

ABS is a dual channel unit is standard on the RC 390. RC200 on paper doesn’t seem to get ABS even today. Features list includes a digital meter which has a host of fuel efficiency parameters, clock, trip, odometers, RPM and speedo which are digital and much more is on offer.