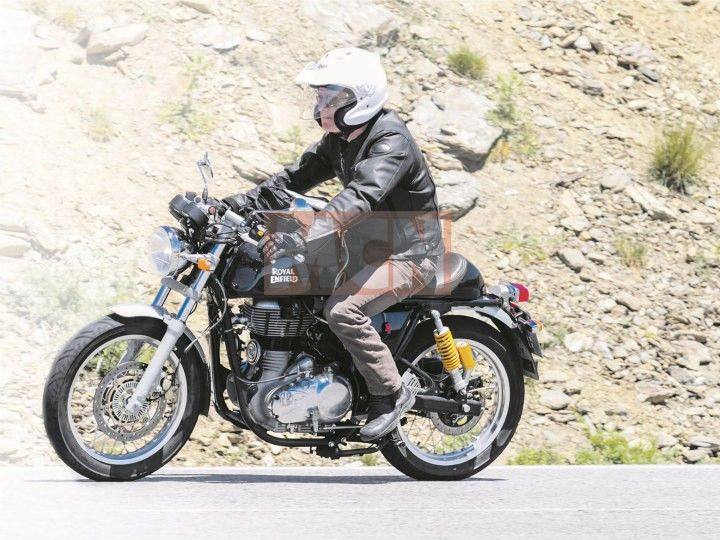 2017 Royal Enfield Continental GT ABS will also be Euro 4 to make sure it meets all compliance’s in the year 2017.

If there is one Royal Enfield we have been big fans of, it will be the Continental GT. However, it was a brilliant product that the Indian market is yet to accept like other Royal Enfield products. The international market, which the bike was essentially designed for  did love the rebirth of an old icon, but it was a less than perfect build quality and the lack of the bike’ capability to touch the 100 mph figure, a necessary milestone back in the day when the Café Racers came into being. That said, Royal Enfield seems to be working tirelessly towards improving its quality issues and to establish itself as a major global player in the middle weight motorcycle segment. This is why we think the just spied Continental GT prototypes in Europe hold immense importance for the Chennai based maker’s global aspirations.

On the design front, the 2017 Continental GT looks like an absolute copy of the present bike. This is actually a great thing, since the Continental GT is among of the most gorgeous modern classic design out there globally and we are glad RE hasn’t tired interfering with it. With its timeless design, that long, thin tank accompanied by wide sporty handlebars and the retro sporty exhaust, the Continental GT doesn’t really need any design update. We expect the bike to carry the same dimensions of the current bike as well.

By far the Best Royal Enfield chassis in its entire history, the one on the present Continental GT seem to continue doing its duty on the 2017model as well, and we aren’t complaining. Expect the thick front forks and the rear gas charged units to continue providing the GT an unmatched riding experience.

As for the brakes, this 2017 Continental GT prototype had a dual channel ABS system on board, courtesy those ABS rings visible on the floating discs. Expect the rather good Brembo front and Bybre rear disc brake setup to continue while we reckon the Pirelli Demons will still be doing duty on it.

Price hike should be around Rs. 25,000 mark. Launch will happen 2017 with BSIV emission norm compliance.

We were a bit sad to see the current bikes engine continuing to power the GT for 207 as well. However, we are certain that the engine has undergone many technical tweaks to make it compatible with the BS IV regulations. As such we expect the GT to remain the most powerful RE in the market till its 750cc variant arrives in 2018. Though outputs aren’t known as of now, but we think there won’t be any major change in them for 2017 as well.

The new 2017 Continental GT is expected to arrive with a double channel ABS system and LED DRL as standard. Other features already on the current bike will also continue to be offered.

This is the beauty of the Royal Enfield Continental GT; there truly is no rival to it. Still, RE has found it an extremely hard to bring in sales numbers from the bike. We hope RE will make sure that the 2017 model will be free from any quality issue what-so-ever. And this time we hope, the promote it as much as the Himalayan, because, the Continental GT is still the best, the iconic motorcycle maker has build and we would like it to finally get the success it deserves.