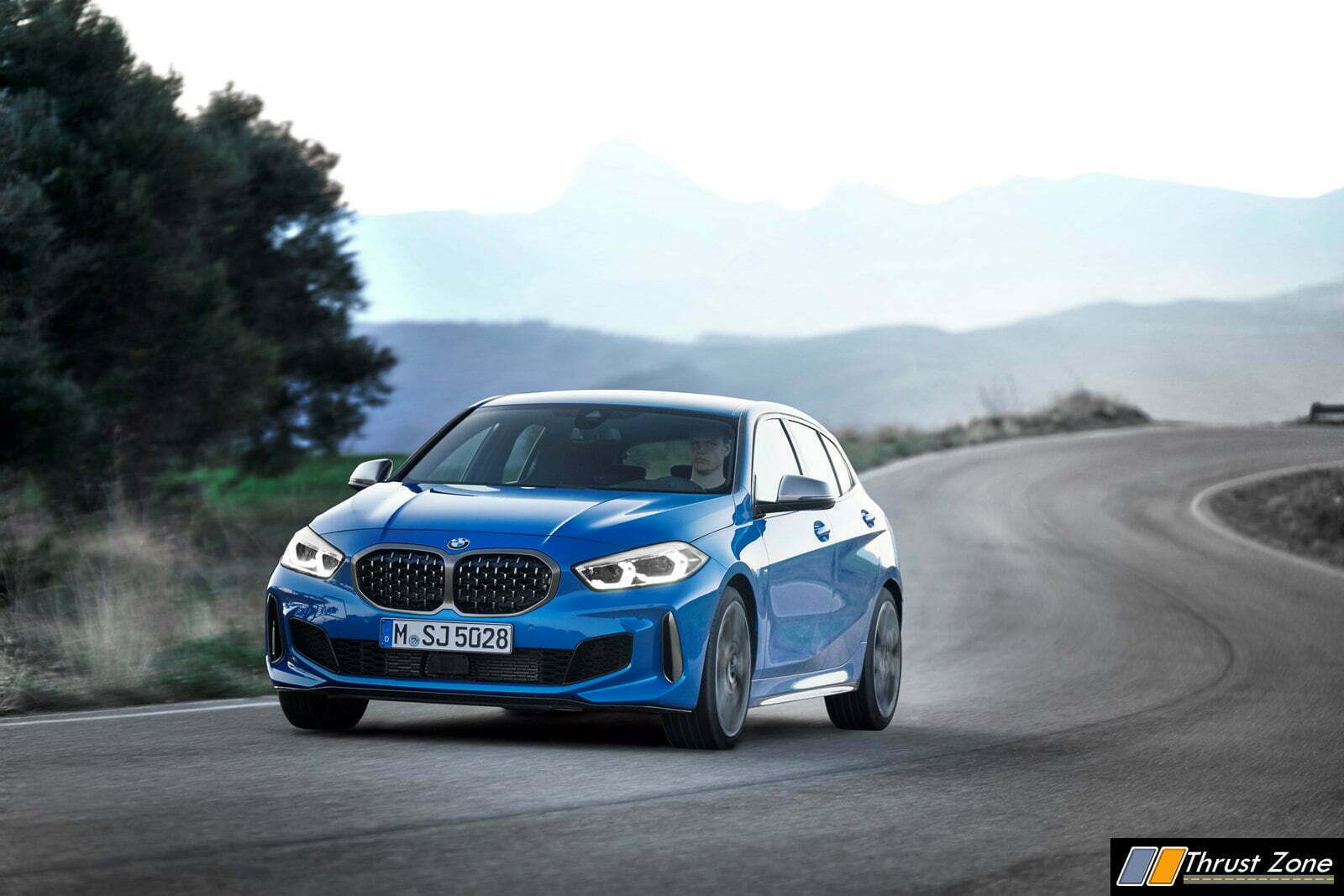 2020 BMW 1 Series Unveiled with host of engine, gearbox and performance version. Technology and interior layout are all new

The third generation 2020 BMW 1 Series will be unveiled to the public for the first time on 25 – 27 June 2019 on the new BMW Group #NEXTGen presentation platform at BMW Welt in Munich. Hosting the show premiere of the new BMW 1 Series, meanwhile, will be the IAA event in Frankfurt am Main in September 2019. The worldwide launch will get underway on 28 September 2019.

More than 1.3 million examples of the BMW 1 Series have been produced in its first two generations, the car proving especially popular in Europe. The third-generation model offers significantly more space than its predecessor with little change to its exterior footprint, thanks to the cutting-edge BMW front-wheel-drive architecture. Passengers in the rear are the main beneficiaries, while a larger load compartment also results. Available as a five-door model only, the all-new BMW 1 Series is five millimetres shorter than its predecessor at 4,319 millimetres. In terms of width (now 1,799 millimetres), it has grown by 34 millimetres while its height (1,434 mm) has increased by 13 millimetres. At 2,670 millimetres, the wheelbase is 20 millimetres shorter than that of the second-generation model. 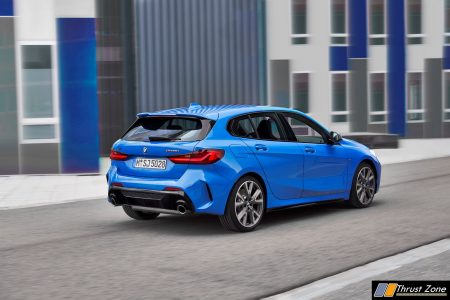 The new face of the 2020 BMW 1 Series and its fresh interpretation of iconic BMW features can be seen clearly from the front. The signature BMW kidney grille is now larger, with far greater presence. For the first time in this model range, the two kidneys now merge in the middle. The sporting flagship of the line-up is the BMW M135i xDrive which replaces the grille’s classical bars with a prominent three-dimensional mesh design inspired by racing cars. The optional full-LED lights – in adaptive guise, if desired – cut a particularly modern figure. The BMW 1 Series is available with an array of new light-alloy wheels starting from 16 inches in diameter. 19-inch items are available as an option for the first time.

The electric panoramic roof available for the first time on the BMW 1 Series lets more light into the interior, where more room and an enhanced feeling of spaciousness meet high-quality materials and innovative details. These include backlit trim strips, making their debut in a BMW as an option. They come in three different designs with six switchable colours and create compelling translucent effects. Grouped control clusters for the heating & climate functions and the various driving functions provide ease of use, while functional stowage options – such as the area in front of the gearshift lever, which can be specified with the Wireless Charging option for smartphones – deliver additional comfort and convenience. 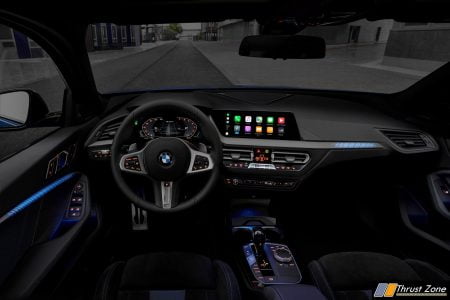 Access to the optional infotainment features of the new BMW Operating System 7.0 – using gestures, if the relevant option is specified – is via a grouping of two displays, each of which have a screen diagonal measuring up to 10.25 inches in the case of the BMW Live Cockpit Professional. The new display design of this option mimics the newly designed BMW kidney grille in both form and arrangement.

The central, touch-compatible Control Display is angled towards the driver in customary BMW style and is optimally positioned in their field of view. Added to which, the full-colour, 9.2-inch BMW Head-Up Display – available as an option for the first time on the BMW 1 Series – allows the driver to view information without taking their eyes off the road.

A standard feature of the BMW 1 Series, ARB uses a slip controller that is positioned directly in the engine control unit rather than in the control unit for the DSC (Dynamic Stability Control) system. Eliminating the long signal paths means that information is relayed three times quicker, while the driver perceives wheel slip being brought under control up to ten times faster. Actuator contiguous wheel slip limitation works in close tandem with the DSC system to bring about a clear reduction in the power understeer normally experienced in front-wheel-drive cars. 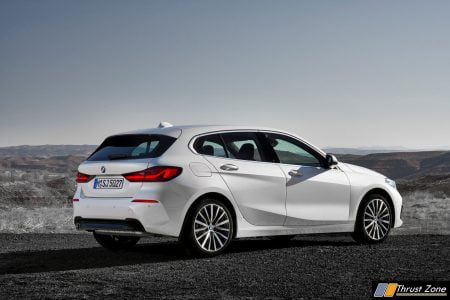 The ARB technology is assisted in its task by BMW Performance Control (yaw moment distribution). This feature, also included as standard on the 1 Series, gives it more agile handling by applying the brakes as required at the wheels on the inside of the bend before the slip threshold has been reached. The result is neutral steering behaviour. Besides the standard suspension – which already has a dynamic set-up and is specially tuned to the different engine variants – and the M Sport suspension with a 10 mm reduction in ride height, the all-new BMW 1 Series can also be specified with the Adaptive suspension with VDC (Variable Damper Control) as an option. This particular variant lets the driver choose from two different damper response settings – Comfort or Sport – using the Driving Experience Control switch. All new BMW 1 Series models from the entry-level engine upwards are equipped with a multi-link rear axle.

The differential is integrated into the standard-fit eight-speed Steptronic Sport transmission and also features a Launch Control mode that already puts the full peak torque of 450 Nm (332 lb-ft) on tap in first and second gear. The even sharper response of the M Sport steering in the BMW M135i xDrive produces a further noticeable increase in the car’s agility and gives it an even bigger appetite for corners. And the M Sport brakes offer excellent fade resistance and abundant reserves of stopping power at all times. The M Sport steering and M Sport brakes are also available as optional extras for other BMW 1 Series models. 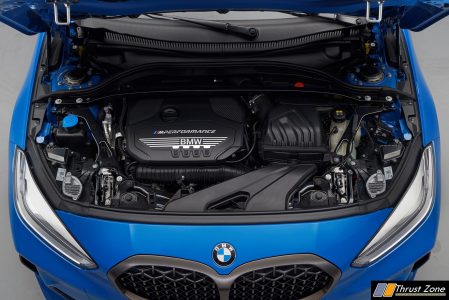 All the engines available for the 2020 BMW 1 Series meet the strict Euro 6d-TEMP emissions standard, while the BMW 116d is already Euro 6d-compliant. The petrol engines are equipped with a gasoline particulate filter and the diesels with a diesel particulate filter, NOx adsorption catalyst and SCR (Selective Catalytic Reduction) technology. 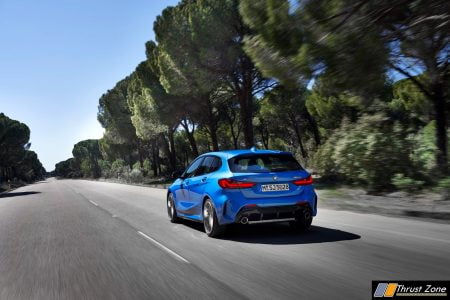 Depending on the system in question, camera images and data gathered by radar and ultrasonic sensors are used to monitor the vehicle’s surrounding area and either alert the driver to hazards or minimise the risk of an accident by means of corrective braking and steering. Standard equipment in Europe includes collision and pedestrian warning with city braking function, which also alerts the driver to the presence of cyclists.

Also fitted as standard is the Lane Departure Warning system with active lane return, which is operational from 70 to 210 km/h (44 – 130 mph). Options include Active Cruise Control usable up to 160 km/h (99 mph) – on cars with automatic transmission and Stop & Go function – plus the Driving Assistant, which comprises the Lane Change Warning system, rear collision warning and crossing traffic warning.

The BMW 1 Series provides assistance with parking in the form of the optional Park Distance Control (PDC), rear view camera or Parking Assistant. The latter enables automatic assisted parking in spaces that are either parallel or perpendicular to the road, as well as automatic manoeuvring out of parallel parking spaces. Celebrating its premiere in the premium compact class is the innovative reversing assistant, which stores the steering movements for any section the car has just driven forward along at no more than 36 km/h (22 mph). The system is then able to steer the vehicle in reverse – for distances of up to 50 metres at up to 9 km/h (5.5 mph) – along exactly the same line it took when moving forward.

Available as an option, the BMW Digital Key enables users to lock and unlock the vehicle from a smartphone using Near Field Communication (NFC) technology, rendering the conventional car key surplus to requirements. Holding the smartphone up to the door handle opens the car – even if the phone battery is dead. The engine can be started as soon as the phone has been placed in the smartphone tray or wireless charging tray. The driver can share the BMW Digital Key with up to five other people or use the BMW Key Card with the same functionality. The BMW Digital Key is available for top-spec NFC-compatible Samsung Galaxy models running Android 8.0 and above.

The Intelligent Personal Assistant is a genuine BMW expert and is familiar with virtually all the car’s functions. After waking the system with the prompt “Hey BMW”, drivers can operate their car and access its functions and information simply by speaking. The BMW Intelligent Personal Assistant is a digital character with his own personality, who can learn routines, preferred settings and habits – and subsequently apply them in the appropriate context or engage in casual conversation. One unique feature over other digital assistants is that drivers can give this one a name of their choice.

Connected Navigation services allow internal and external information to be factored into route planning. Drivers of the BMW 1 Series will be able to send destinations from various apps straight to their car’s navigation system, store them and synchronise them with the car. The Parking Space Assistant proposes various parking options to the driver in good time before the destination is reached.

This service includes providing information on the nearest multi-storey car park as well as suggesting routes that offer a particularly good chance of finding a parking spot close to the destination. The existing On-Street Parking Information and PARK NOW services are integrated intelligently into the process. In selected cities, it is even possible to pay parking charges automatically.

In addition to the usual buttons on the centre console and steering wheel, other frontline control elements include the iDrive Controller – with touchpad from BMW Live Cockpit Plus upwards – and the standard 8.8-inch Control Display with touchscreen functionality. BMW Live Cockpit Plus also adds a navigation system and intelligent voice control with online speech processing. 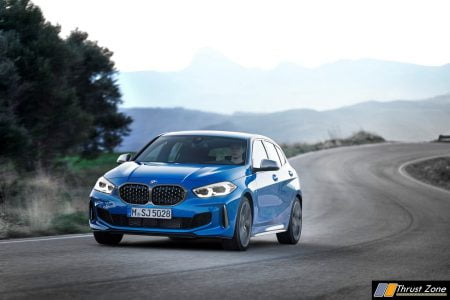 BMW Live Cockpit Professional, based on the new BMW Operating System 7.0, brings together the fully digital display and operating system (including two 10.25-inch displays) with maximum connectivity and customisability. Standout features include an adaptive navigation system and a hard-drive-based multimedia system. There is also the option of controlling the functions using seven different gestures.