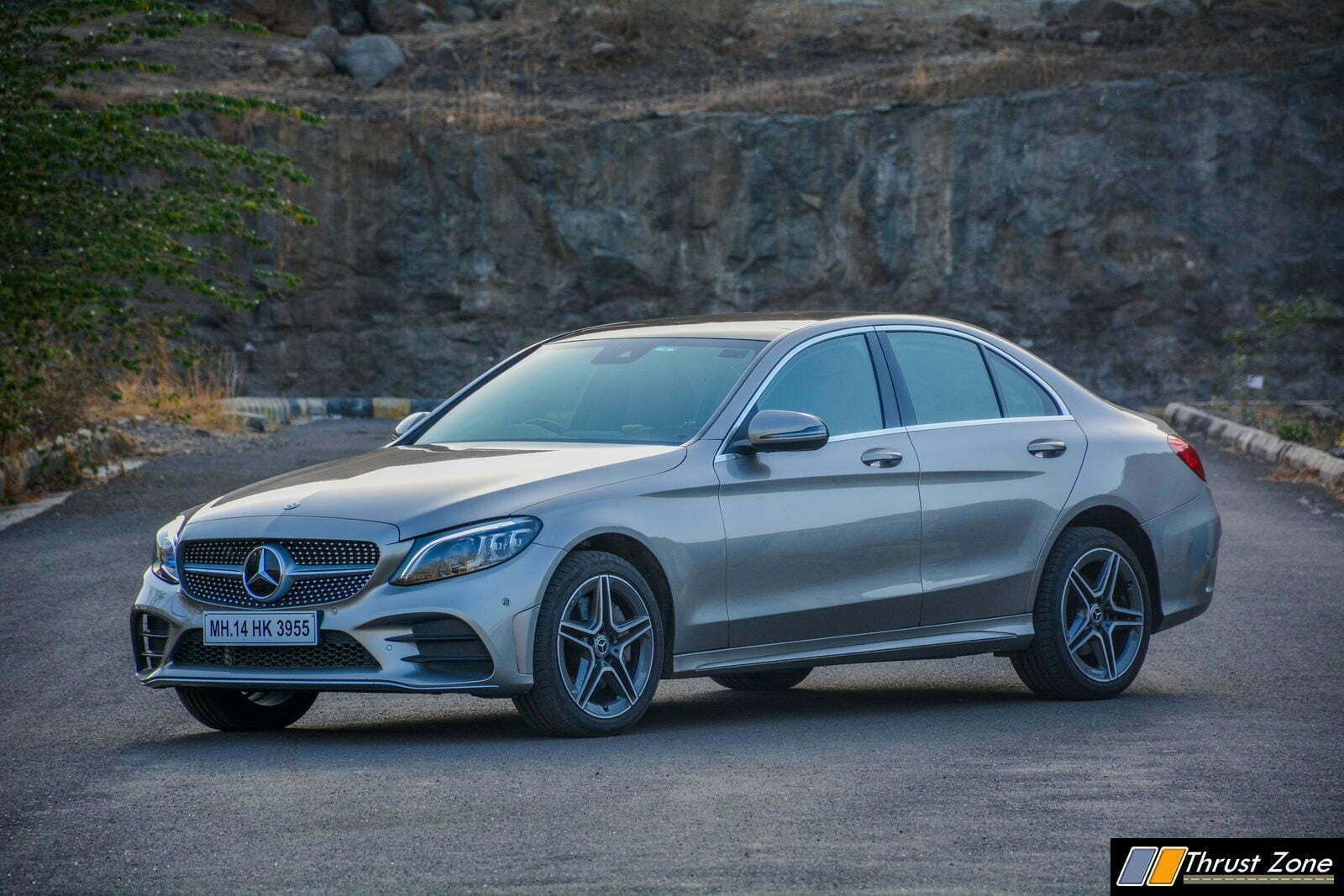 There is no denying that Mercedes-Benz India is on a roll in the country and is the leader of luxury car market. The reason? The product we have with us today, in a different avatar. The manufacturer sells of a lot of C-Class sedans that make for those numbers. The facelift came earlier this year and we witnessed the launch of three variants and three engines on offer for each of them. 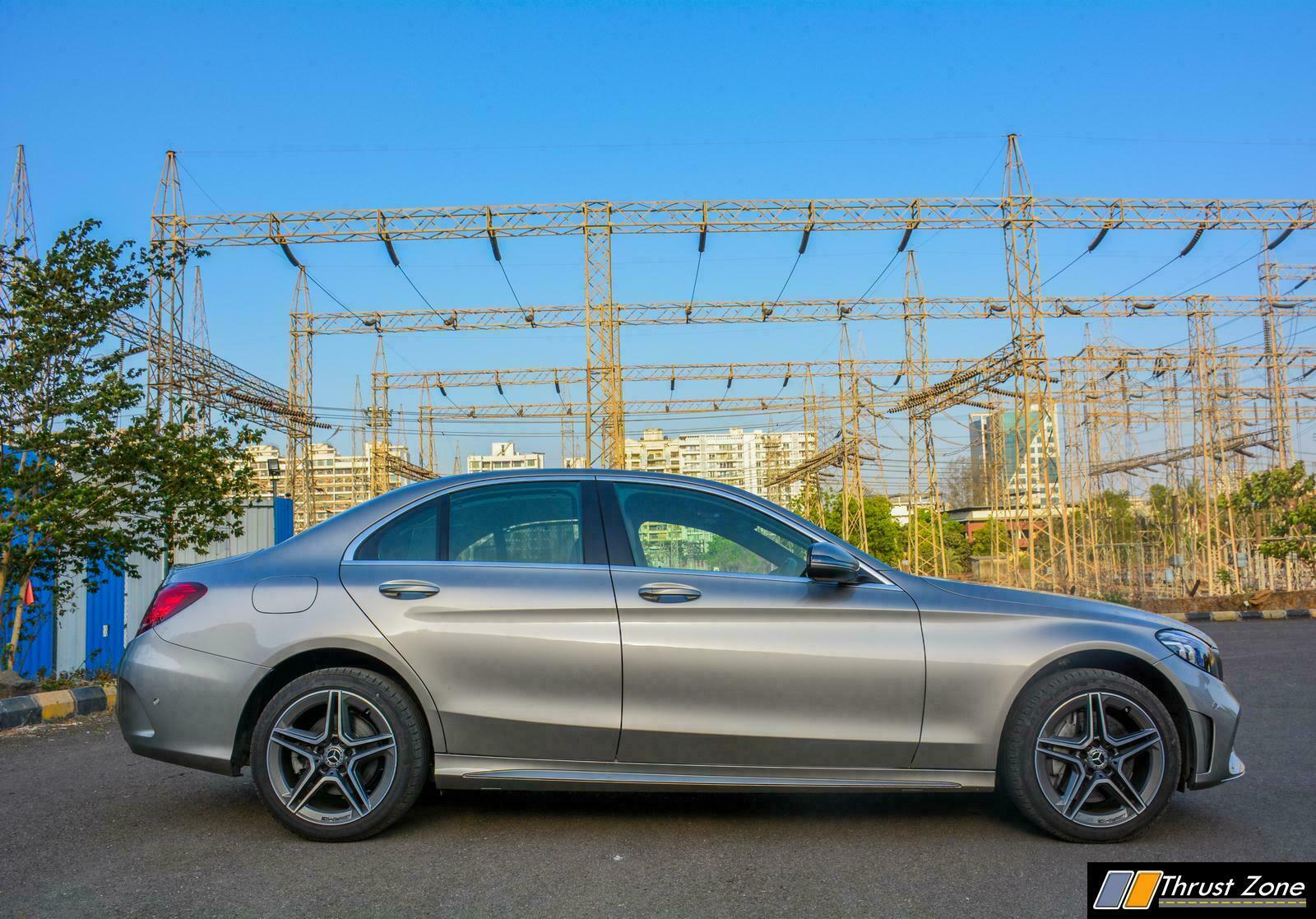 The C200, C220d and C300d. The C300d came with the AMG Line package and its now here with us on test. On paper, this is an enthusiast delight with everything else that is already appeals to the normal customer. However, is the C-Class that good or does just sell on face value and various other generic traits? We find out as we spent quality time with it. 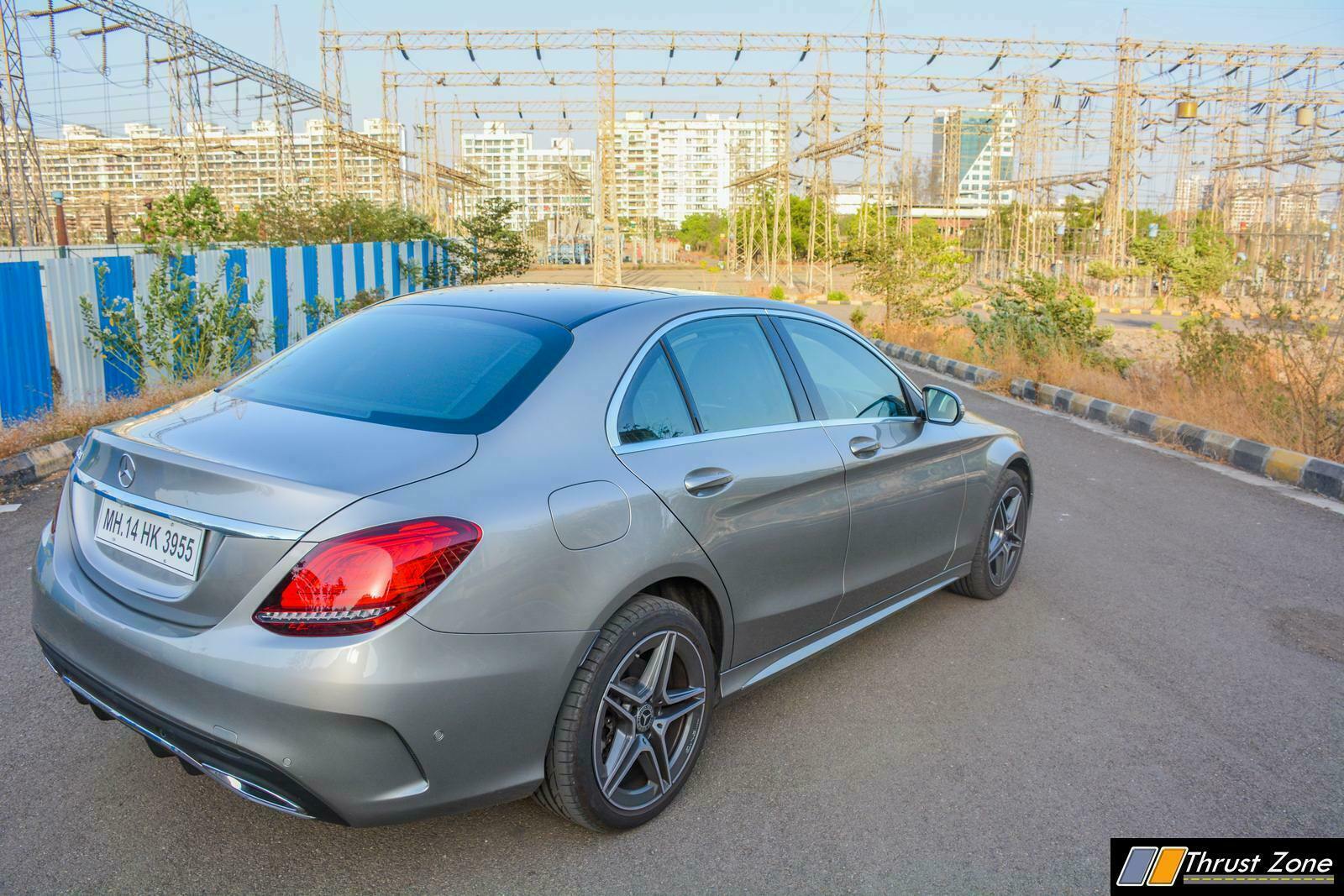 The design, we highly appreciate. The swooping boomerang side profile, the front which gets the star grille and large logo with a sporty bumper and in this light golden color looks eye catchy and almost pretty. The AMG wheels and chunky LED head and tail-lamps make this look like a true entry level high-class luxury car at first glance. The car sits fairly low too and it ends up lending it some great stance. 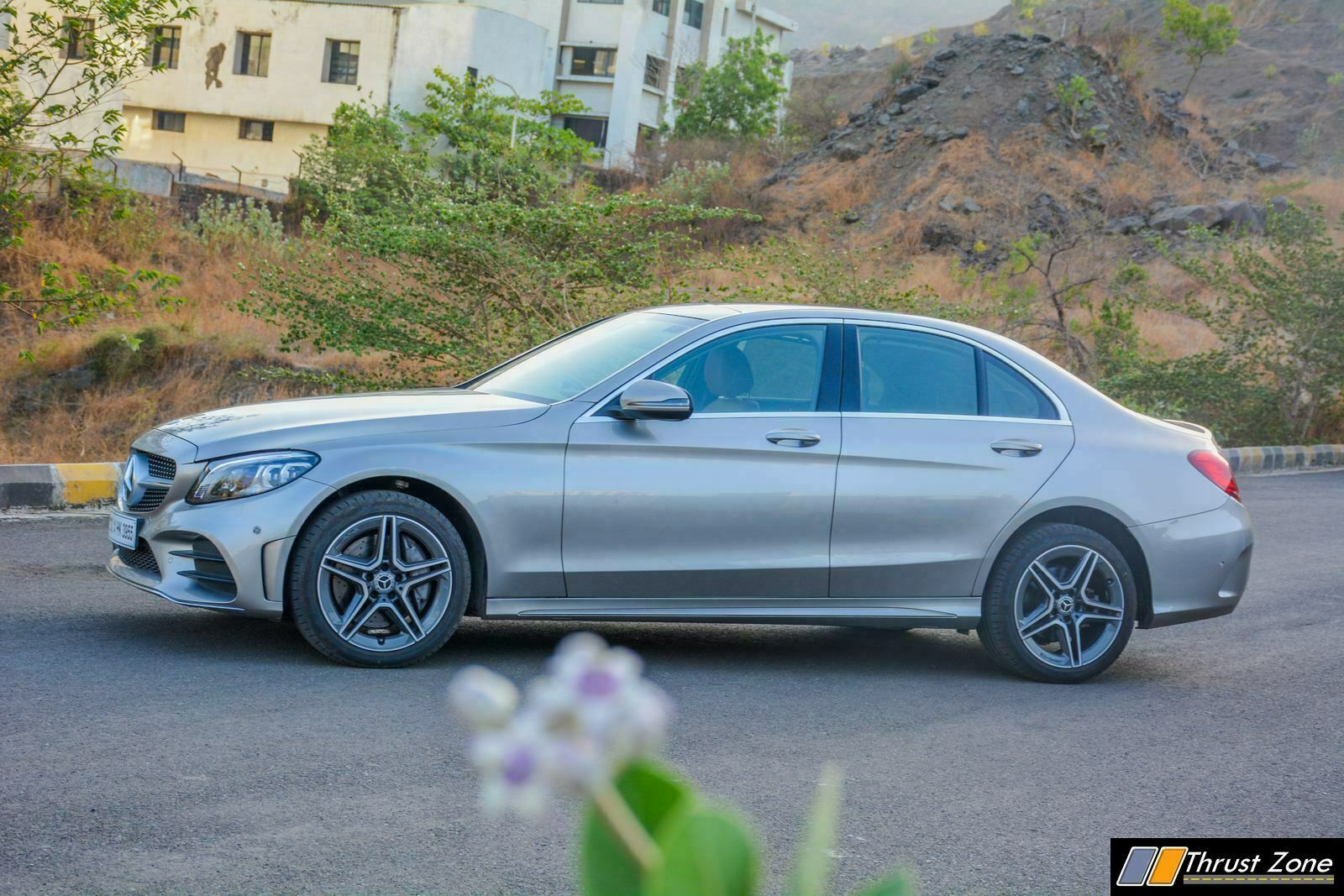 We were impressed by the looks of the front and side profile but as the roof tappers down, it looks way too rounded and the lack of edgy-ness is apparent like the rest of the design. 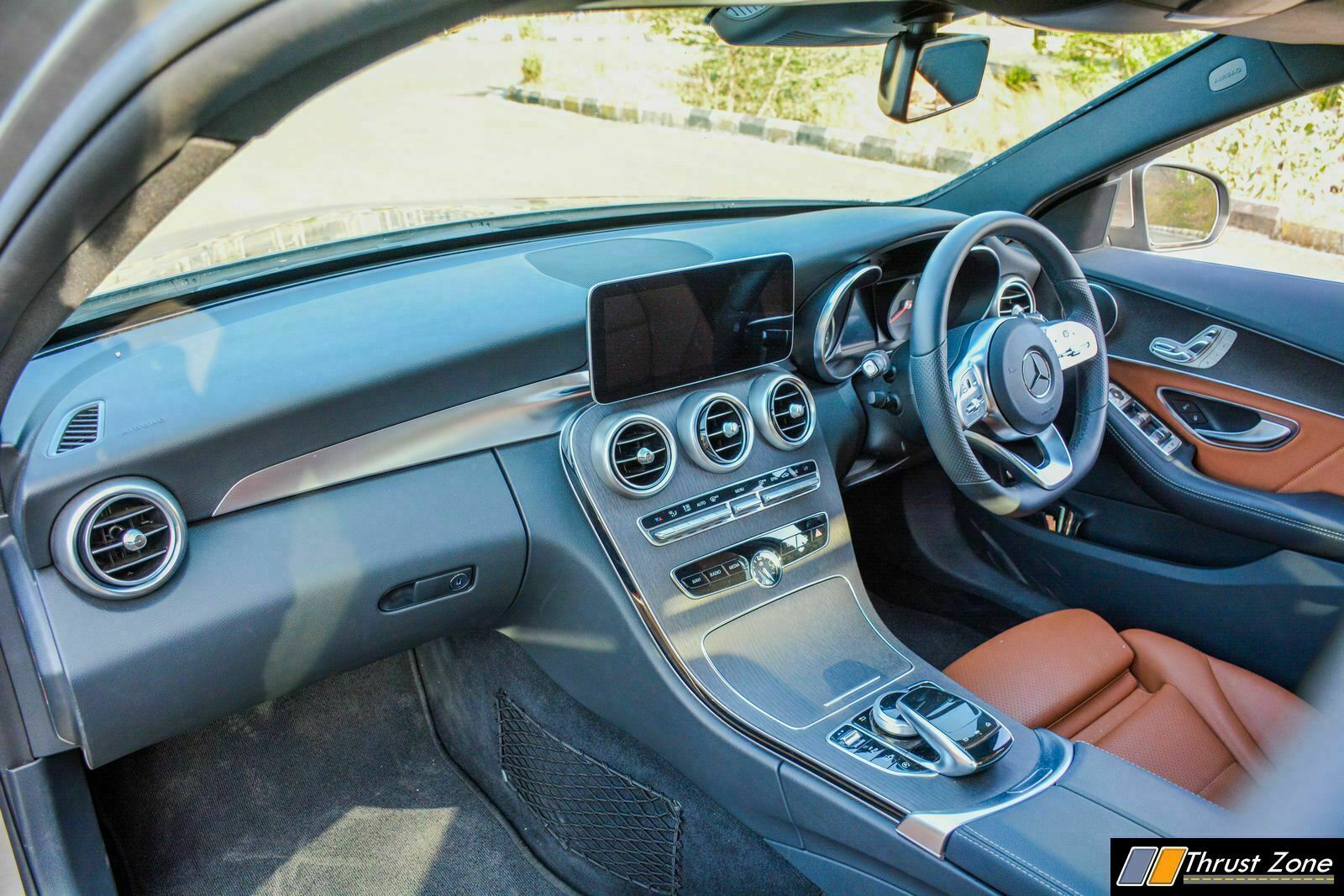 The dashboard design may have trickled down from the S-Class but it just looks unimaginative here with a typical layout and a slab of brushed aluminum and a small place for the ambient lighting to be visible. Sure, below that there is center console made of wood which aluminum finish vents that look great and so do the rest of the controls such as the the dial, the touch pad and the various buttons which are aircraft style switches for A/C and short cut buttons for the touch screen menu.

The door pads also look great with leather insets, aluminium finished window controls and easy to access typical Mercedes fashioned electric seat controls are on offer. Storage in that area is also good and around the car. The glovebox though is very tiny, but there are nets on the side, door pads which can accommodate a lot of the stuff easily. There is a big enough storage in the arm-rest as well. 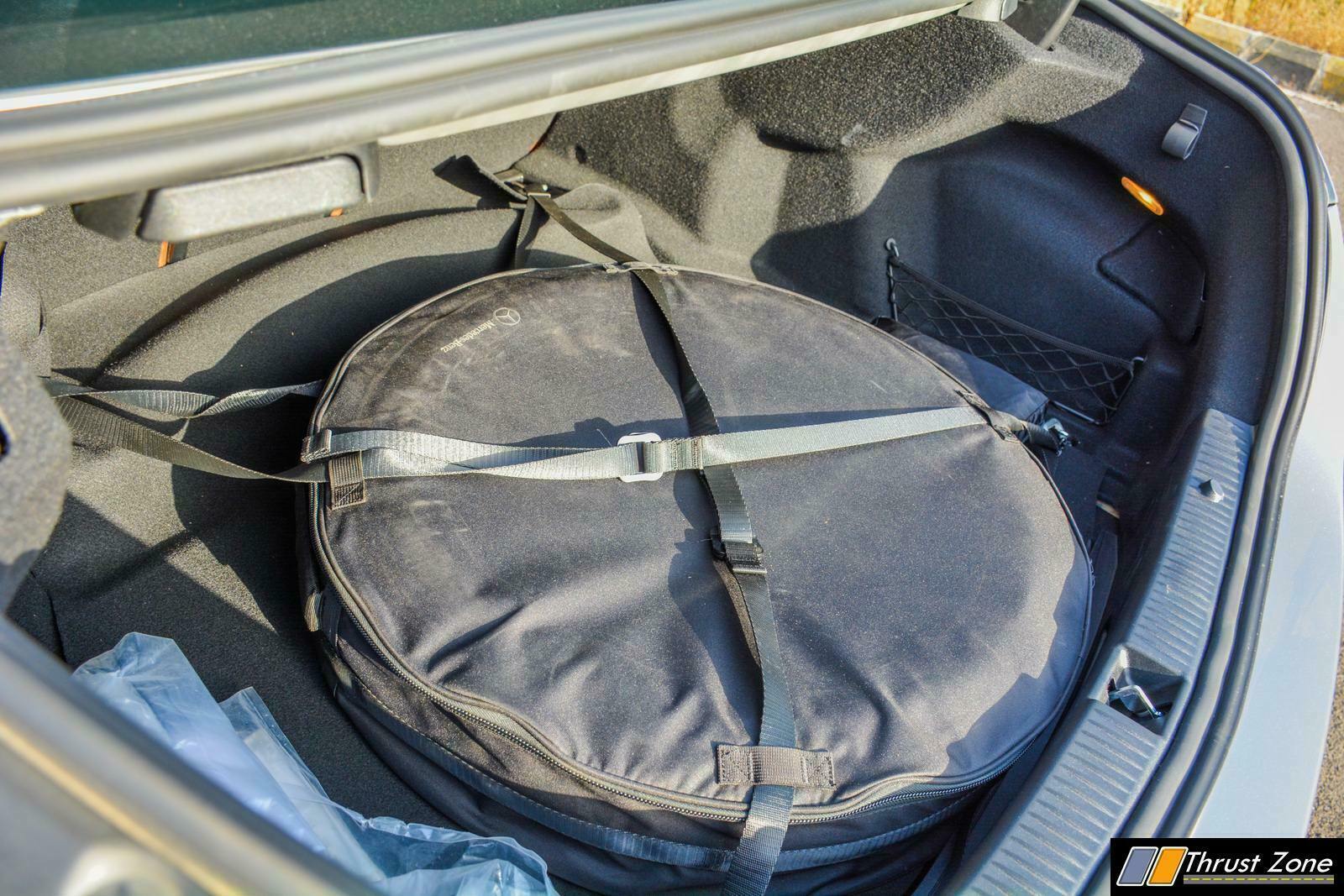 Quality and fit-finish is excellent all around and that is one of the few things that stand out in the car. The infotainment system can be tricky at times as there is a lot to do with the dialer and touch pad and other host of buttons confusing at first, but the time to learn it as well, will be exhaustive. Seats are supportive and the tan leather color is a great addition. 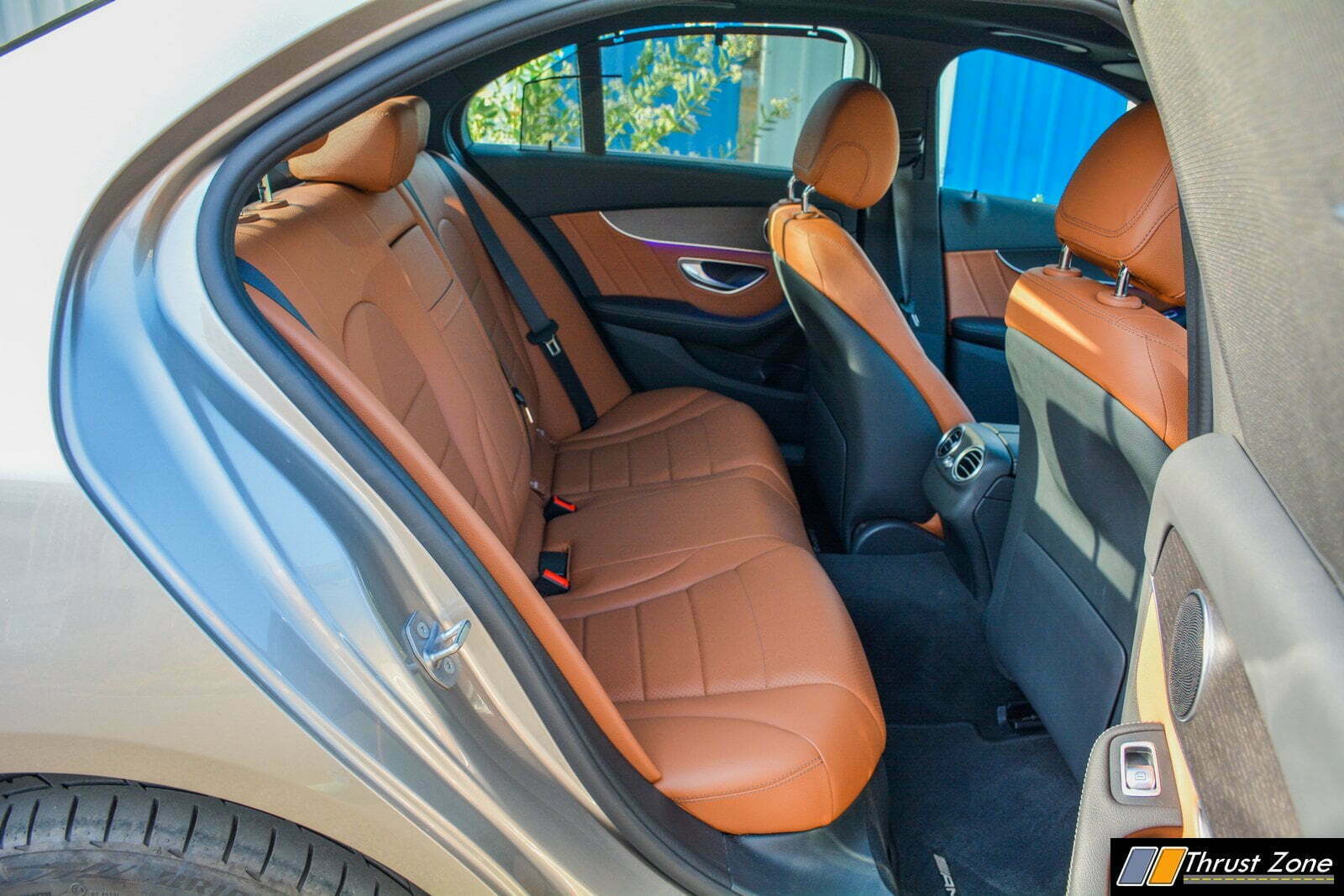 Space in the front is good and in the rear as well, but it is far away from its competition to provide a sense of spacious because of the lack of knee, shoulder and head room which is eaten away because of the dual sunroof, which isn’t really necessary in this segment.A segment where practicality is more on offer. You can always choose the lower C220d variant if you want more headroom. Boot space is yet again just about average and our test car had a space saver eating most of the space. 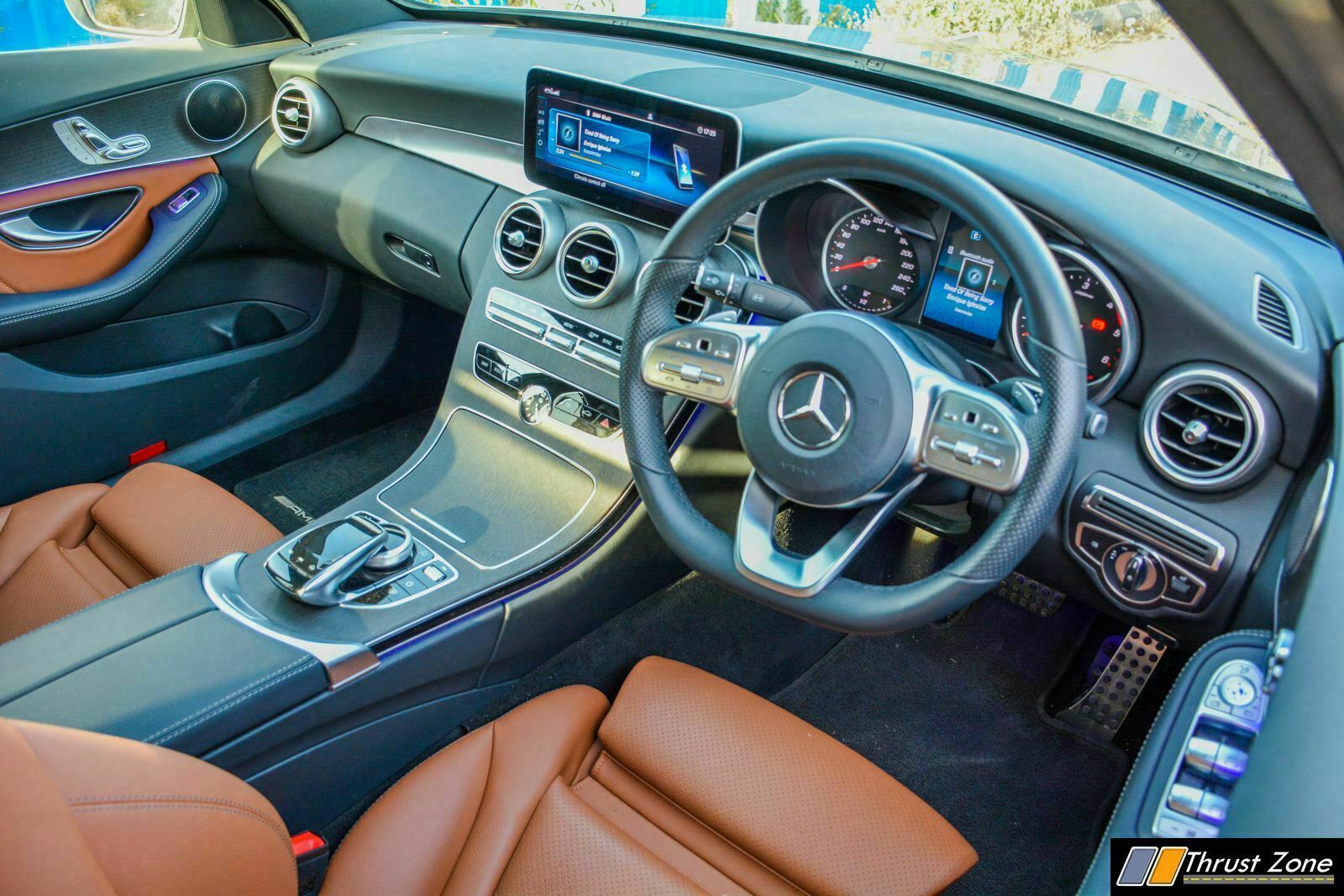 Features list is expansive enough with the addition of sun blinds at the rear and powered one for the rear wind screen. Driving modes, Apple Car Play, Android Auto, cruise control, 64 color ambient lighting, fantastic multi beam headlights are great, a color screen and a multi-function steering wheel touch pads to control all the functions with the help of mini-touch pads, rollers and buttons. All of these controls the features in the speedometer, which is a twin-pod layout and not a screen like its international variants. 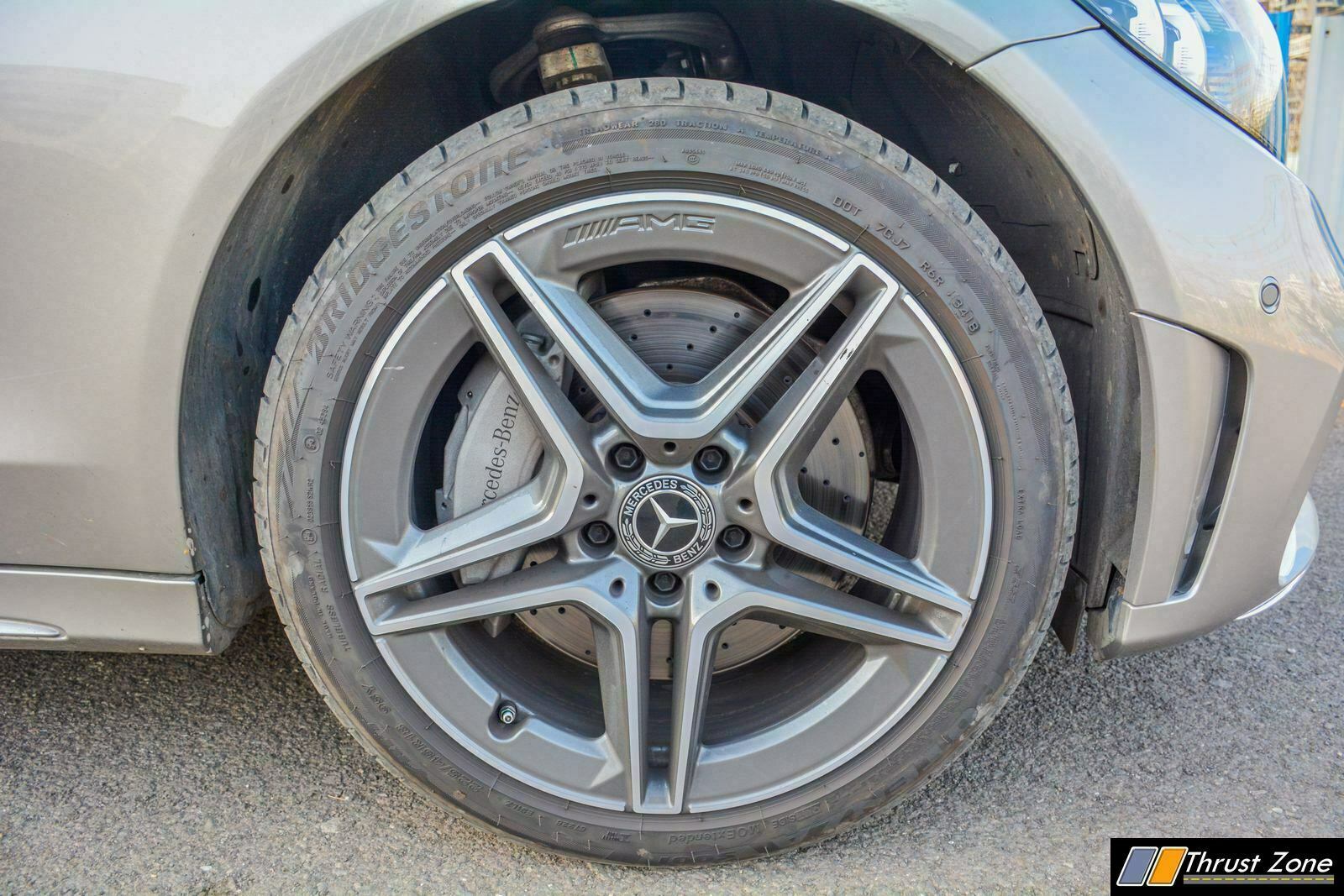 The screen and dials can be rather easily controlled through the multi-function steering wheels and makes life easier once you get to used to it in almost no time. Everything can be displayed in the dial pods as there options to choose from and then everything can be accessed through the mini touch pads. The sense of isolation continues to be very high as your devoid of traffic, wind and road noises in the cabin. 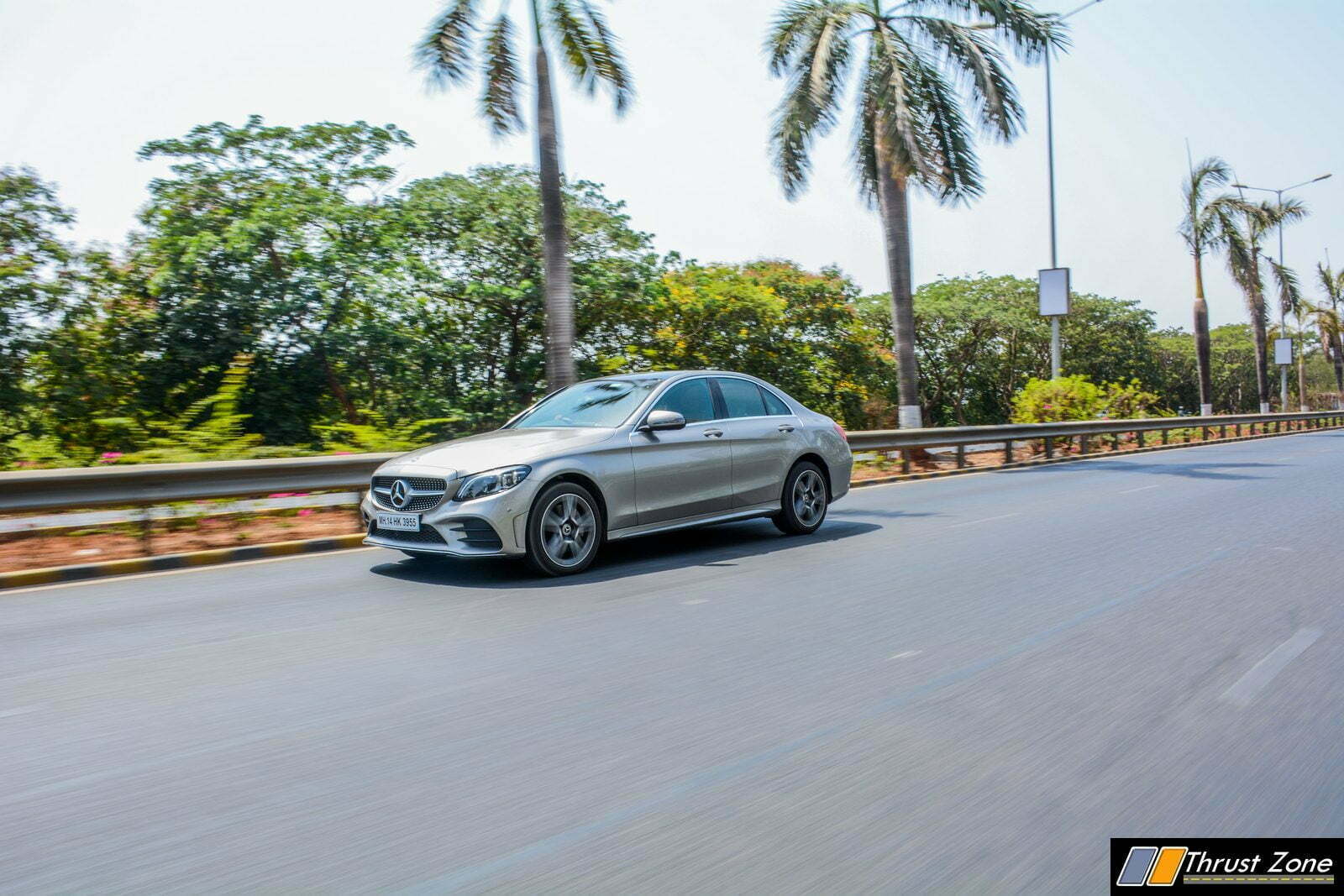 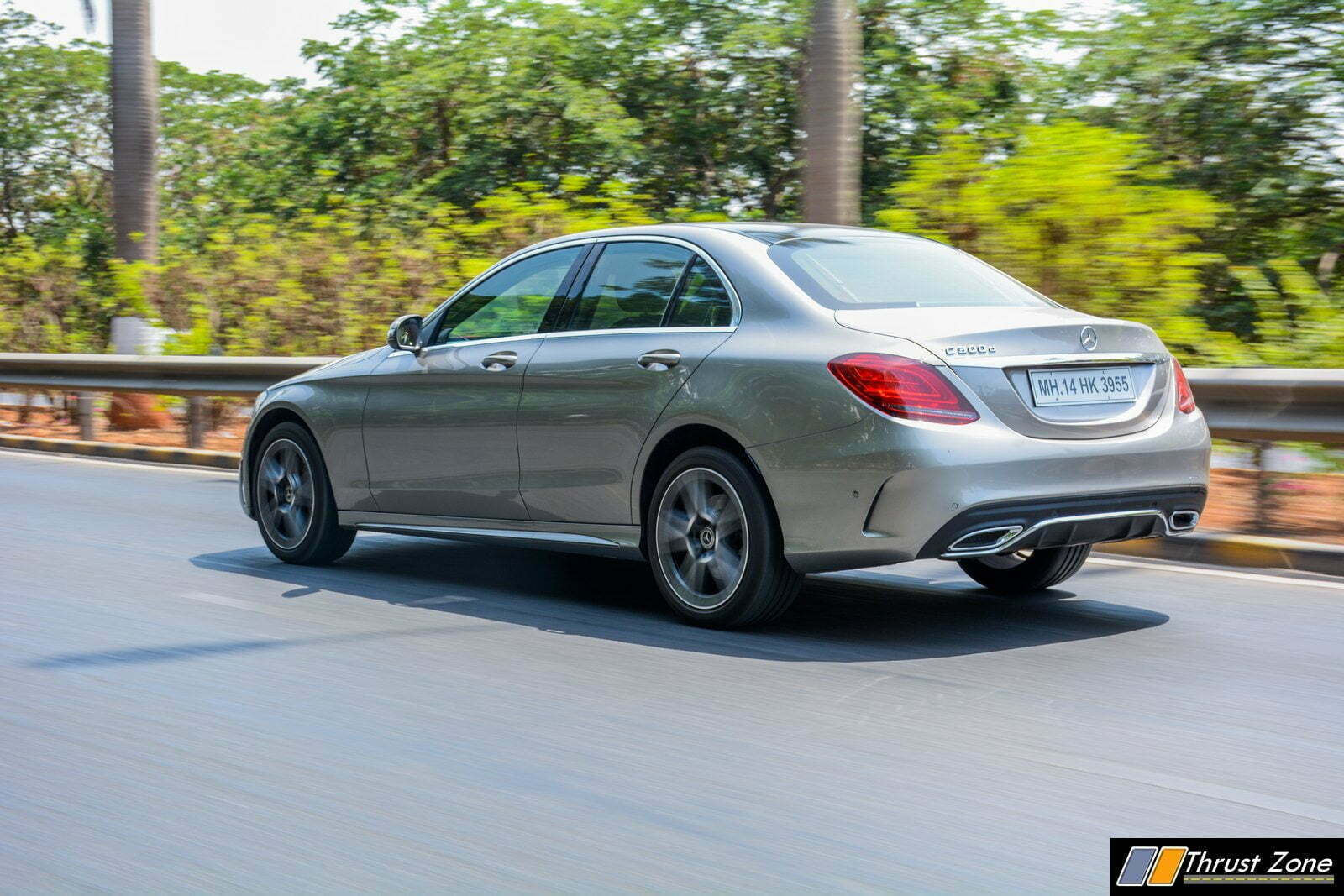 Driving the C300d was a standard Mercedes affair with a lot of twist (pun intended). Technically, the amount of torque, 500 Nm paired with 245 BHP mated to an 9-speed smooth shifting gearbox worked really well. The twin turbo engine had the perfect low-mid and top-end power means that driveability was good and the mid-range was excellent for highway and top-end was juicy enough to put a smile on the face. An engine this powerful and flexible is a rarity. 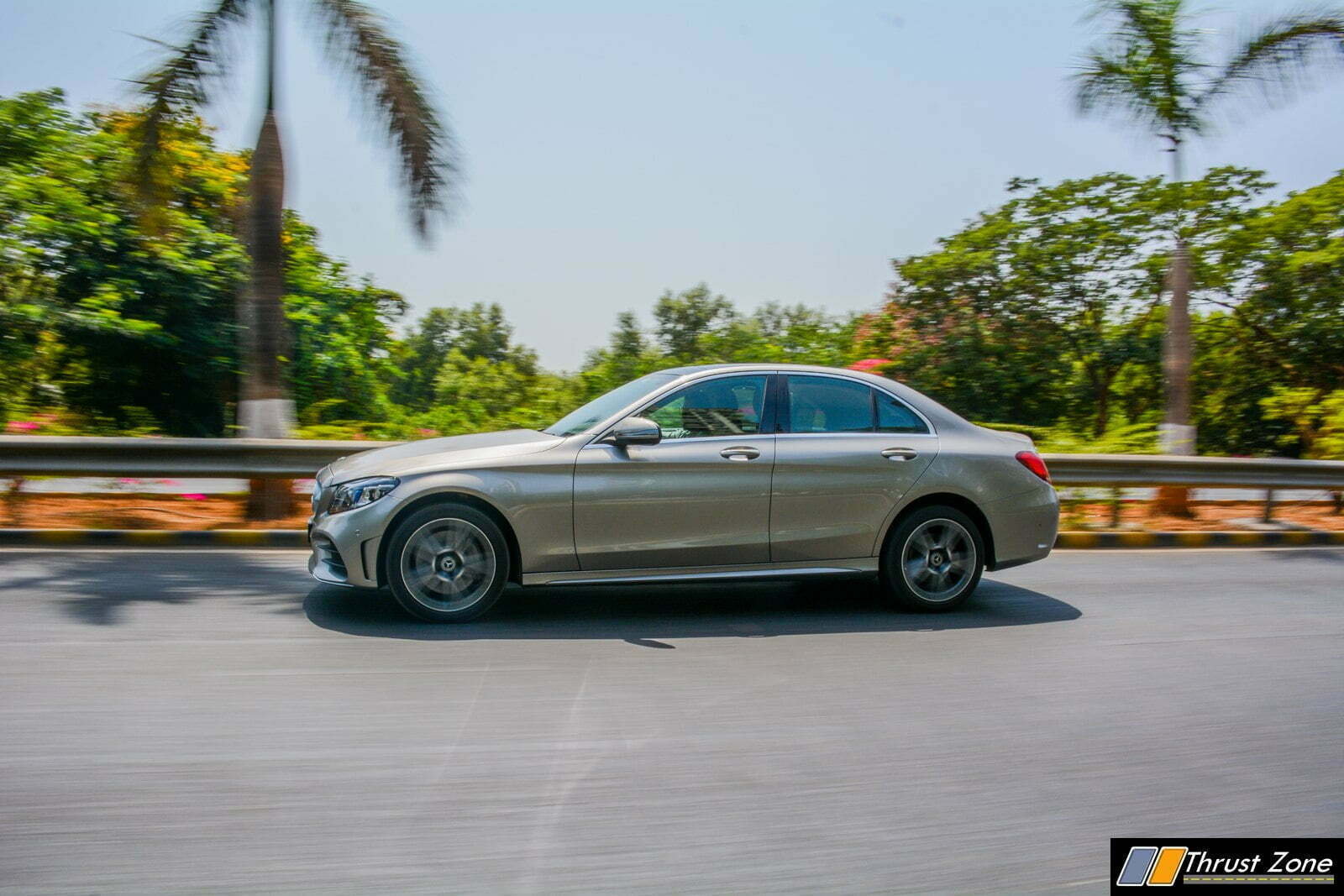 All though that does take a hit on fuel economy, which was a mere 8 km/l in our testing with occasional heavy foot. You can expect a little bit higher in sedate driving. The engine was smooth, free and almost fast revving and was downright linear. So linear that it could be anything you want it to be. It was comfortable doing anything. 0-100 km/hr in 6 seconds is mighty quick indeed. NVH level for the engine below 60 NVH was a tad bit noisy, but post that it maintained all the engines at bay. 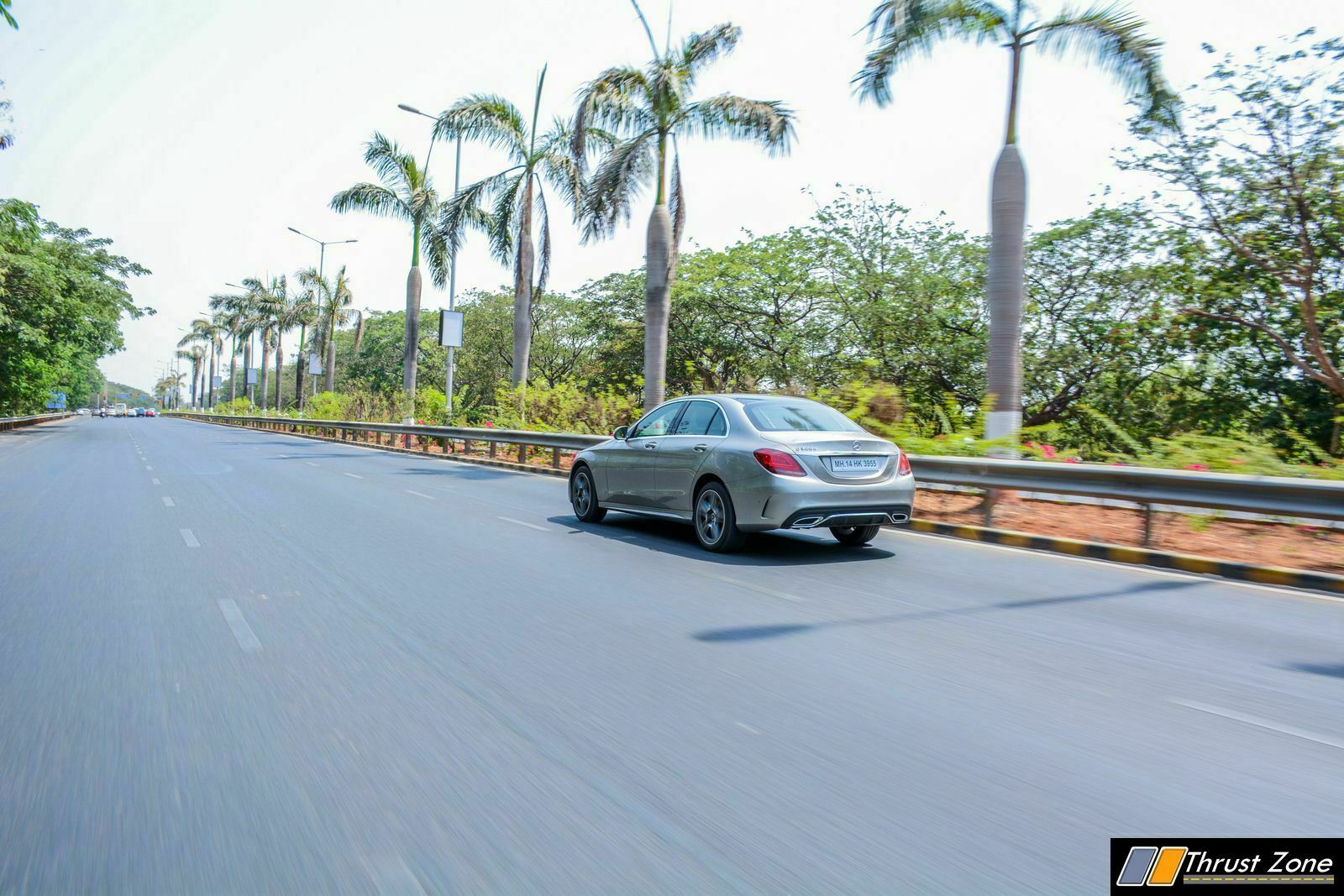 Driving dynamics were typical of the 3-pointed star. The car was stable at any given speed, the ride though was far more firmer that usual Mercedes-Benz’s are. Despite that ride quality was comfortable enough, but not entirely plush as the C220d. Driving modes does adjust the suspension, but the stiffness continues. Body roll was present by a subtle margin, but extremely well taken care of which would happen at really high speeds. Brakes were great in terms of pedal bite and feel. 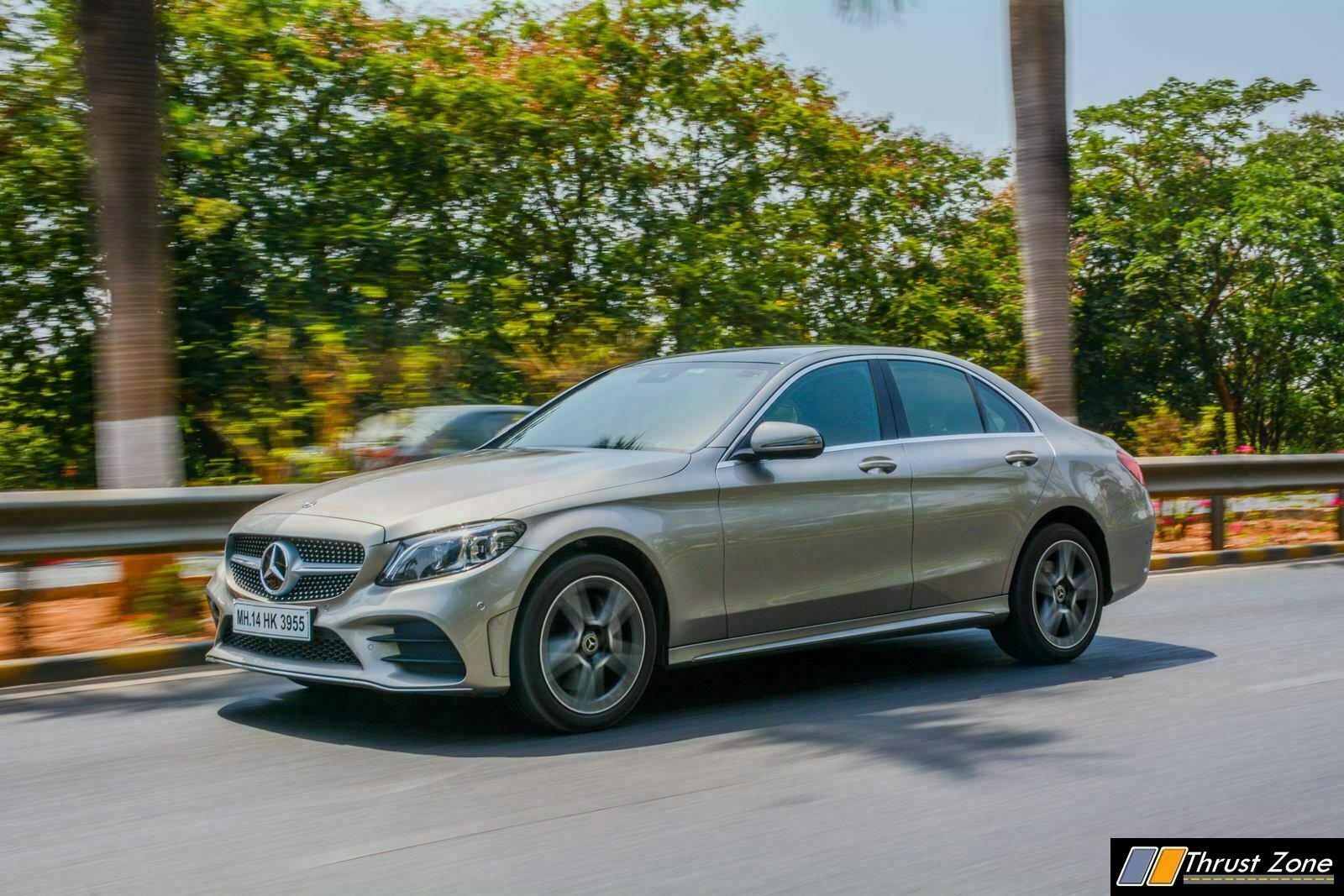 Steering feedback was high and it was well weighted at the center at highway speed. At the same time it was light and precise which is also great for driving pleasure and ease of use in the city. However, we would prefer a more responsive and aggressive steering lock to lock ratio. Overall, it lacks the agility of its rival such as the Jaguar XE and BMW 3-Series. 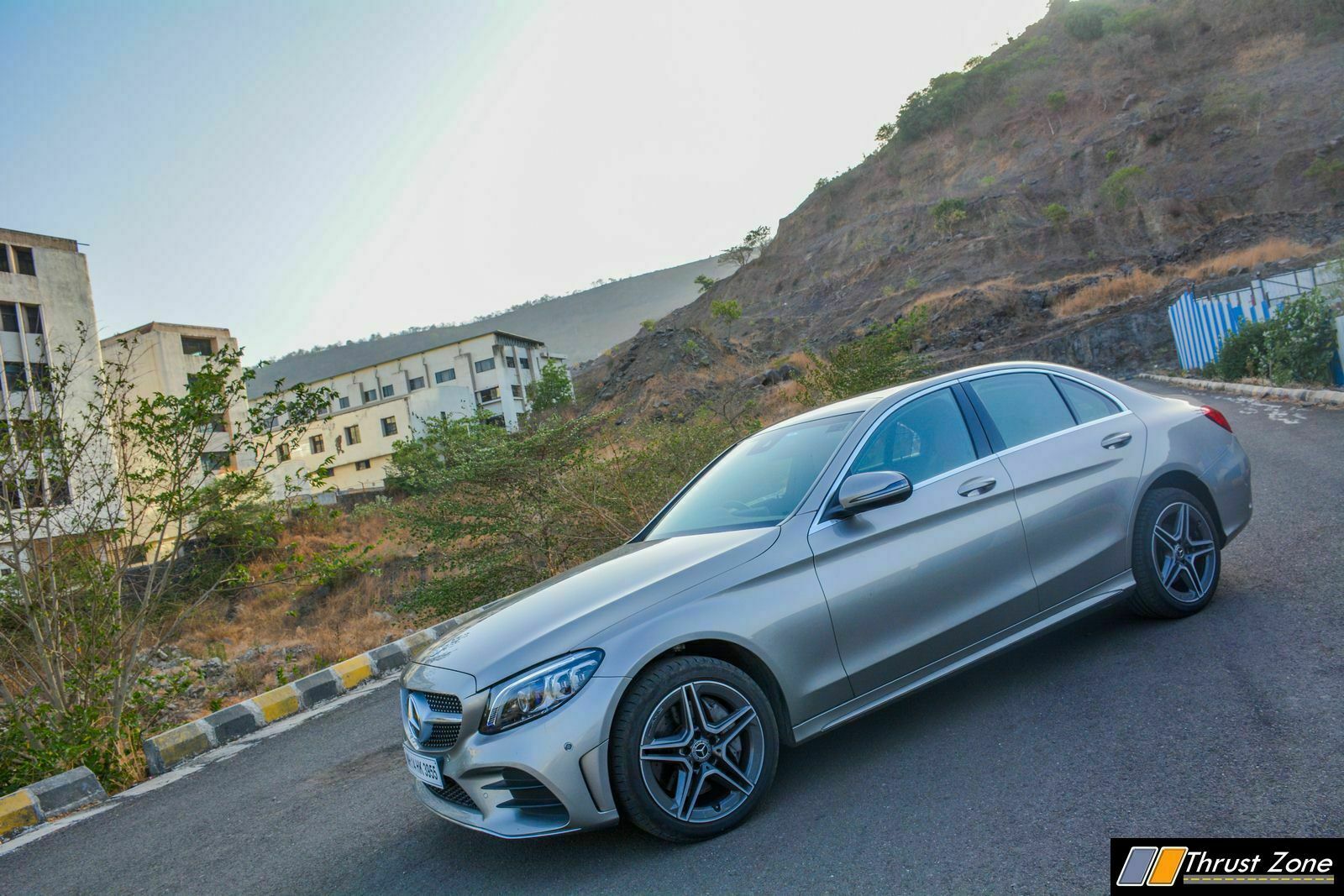 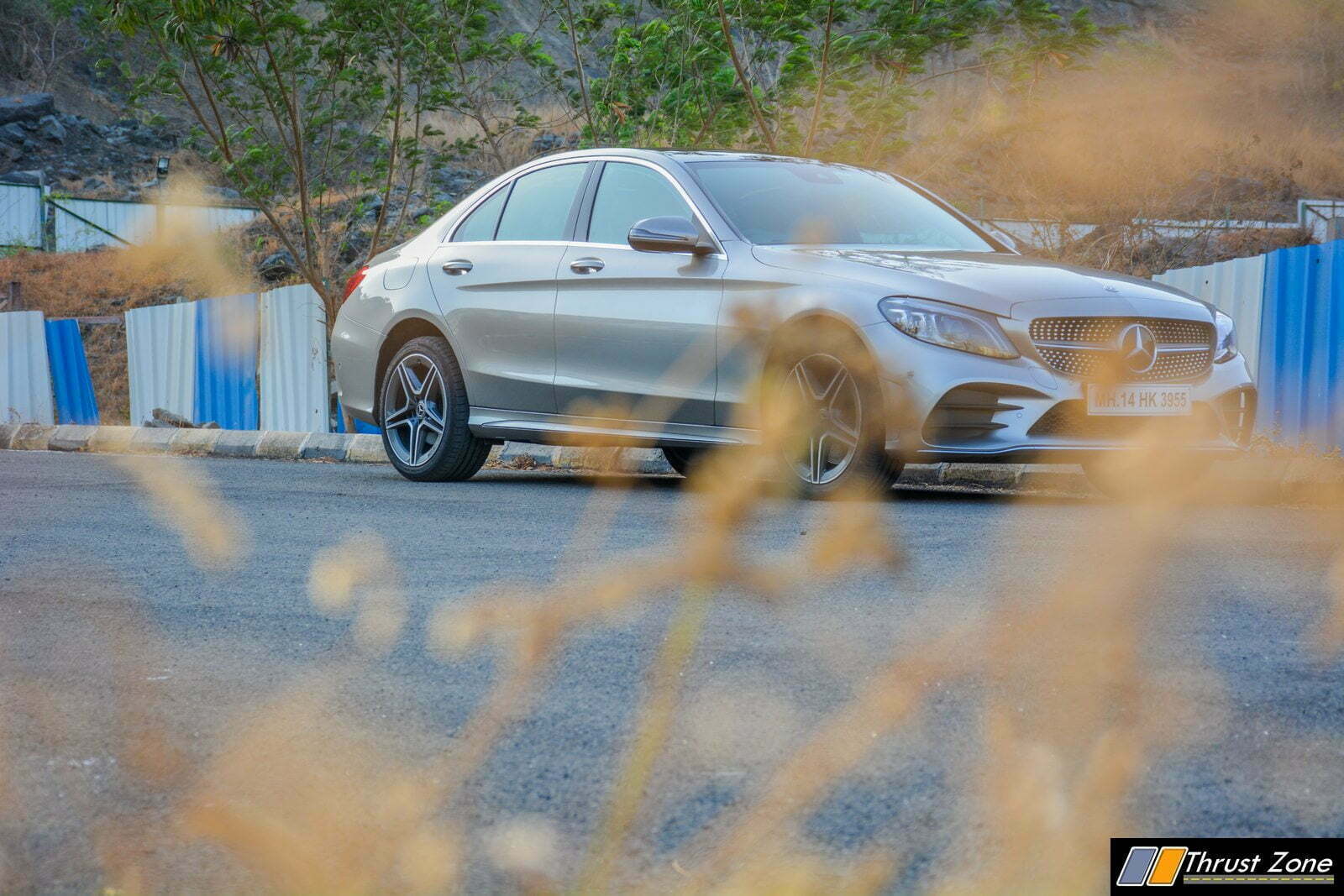 Clearly, the Mercedes-Benz C300d seems a right balance of sportiness and the usual Mercedes trait such as luxury, comfort and safety are on offer. At the same time, the C300d tries hard to be as sporty as possible and delivers great performance with every day usability, but its too neutral to have a character. The C-Class in this current avatar does feel great inside out. You can make the best of the C-Class and make it whatever you want of it, that is what the C-Class, regardless of trim, is all about.