At the ongoing Auto Expo, TVS has showcased its three futuristic mobility. These include its first cruiser concept, a performance oriented electric scooter and an ethanol-powered Apache RTR 200Fi. Let’s go through what TVS has showcased at their stalls, we bet you won’t be disappointed. 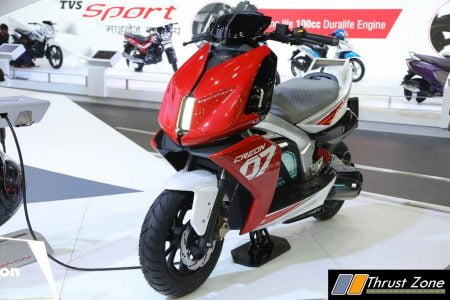 The TVS Creon is an electric scooter concept which is designed for a green future. With the unveiling of this concept scooter TVS claims that this is a performance oriented and also an environment-friendly electric scooter. TVS has offered this concept scooter with futuristic smart connected technologies which have been developed with the joint venture with Intel. It also is equipped with a TFT Screen which displays information such a speed, tachometer, trip meter, odometer, battery charge and battery health status. In addition to this, the Creon is app-enabled and also hosts features such as cloud connectivity.

Powering the Creon are three state-of-the-art Li-ion batteries and it is capable of producing 12Kw of power. These batteries are designed in such a way that it fits into the compact design of the scooter and it can be charged to 80% within 60 minutes. Speaking of performance figures, the TVS Creon can sprint from 0-60 kmph in under 5.1 seconds and has a range of 80Km. TVS is also offering three custom riding modes, regenerative braking, park assist, Anti-theft, GPS & navigation, and geo-fencing.

TVS Zeppelin is performance oriented cruiser concept. It hosts a sleek metal-body with matte black finish and shades of rustic brown. Even though this cruiser concept has an aggressive riding posture it’s comfortable because of the lowered bars and feet forward highway pegs. 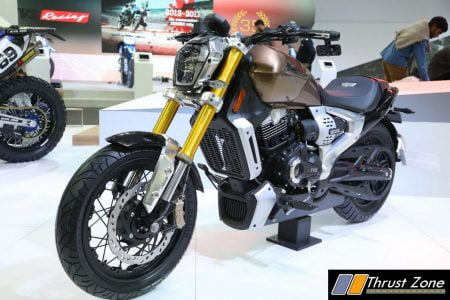 In order to keep weight low, TVS has equipped this bike with a lightweight spoked wheel with 41mm USD upfront forks. While the rear suspension unit gets a monoshock. TVS was the first Indian manufacturer to get ABS in lower capacity bikes and it also offers this concept cruiser with a dual channel ABS unit. The Zeppelin features a bio-electric key, digital speedometer and an HD-action camera mounted near the headlamp to capture your riding shots and videos.

Powering the TVS Zeppelin is a 220cc engine with an integrated starter generator (ISG). The ISG helps to start the bike quickly giving it an initial boost. In addition to this, the Zeppelin also is equipped with a 1200W regenerative assist motor with a 48V Li-ON battery which TVS claims to add performance on this cruiser. If TVS launches the Zeppelin in the Indian market it will give serious competition to the Bajaj Avenger.

TVS has equipped the Apache RTR 200 Fi Ethanol with technical improvements so that the bike is reliable with Ethanol as fuel. Aesthetically, there aren’t any changes as compared with the standard Apache RTR 200. But to differ from the standard bike the Apache 200 Fi (Ethanol) gets green graphics on the tank with a sticker to indicate ‘Ethanol’. 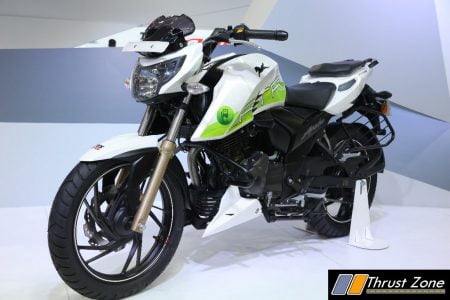 So what exactly is Ethanol, stop scratching your head we have got you covered. Ethanol is a nontoxic biodegradable fuel which is domestically produced from renewable plant sources. This fuel reduces nitrogen oxide emissions, carbon monoxide emissions and sulphur-dioxide during combustion.

Powering this bike is E85 motor which churns out 21PS of power @ 8500 rpm and 18.1Nm of twist @ 7000 rpm. In addition to this, the Apache RTR 200 Fi Ethanol is also equipped with a Twin-Spray-Twin-Port EFI technology which helps the engine to operate in varied ambient conditions thus increasing the performance of the engine. Speaking of performance figures this bike achieves a top speed of 120kmph.