Bavarian automaker BMW is planning to challenge Tesla head-on and is working on an all-electric version of the 3 Series sedan, these new spy shots reveal. The BMW 3 Series Electric was spotted testing in Europe while wearing partial camouflage at the front and rear. While do not expect major cosmetic upgrades, barring the model incorporating the brand’s electric identity, it will be the powertrain that will make all the difference to the offering. The electric 3 Series will lock horns against the Tesla Model 3 in the segment when it arrives sometime next year or in 2022 globally, and is likely to be offered at a similar price point as well.

Not a lot is known about the electrified powertrain on the BMW 3 Series EV, but it is likely to share its components with the BMW i4 and the BMW iX3 electric cars. The iX3 uses an electric motor that develops 269PS and a range of 273 miles (439 km) on a single charge. The lithium-ion battery can be fully charged in just 30 minutes with a 150kW fast charger. On the other hand, the BMW i4 uses a 527PS electric motor with a range of 373 miles (600 km). The i4 is quite the performance offering with a 0-100 kmph time of just 4 seconds. That’s the same time as the M4 Coupe, so an electric M version could be on the cards as well. Compared to the ICE powered version, the electric BMW 3 Series will come with styling updates. Notably, it will be the kidney grille that will be different while retaining the traditional pattern, while the rear bumper will miss out on the cut for the exhaust tip. The 3 Series Electric will also get few air intakes and aerodynamic alloy wheels to reduce drag. The cabin should be a familiar space but unlike the 330e plug-in hybrid, the boot space won’t be compromised to store batteries. In addition to the sedan, BMW is also likely to introduce an electrified 3 Series Station Wagon for European markets. 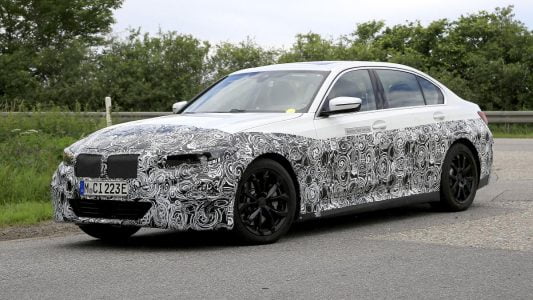