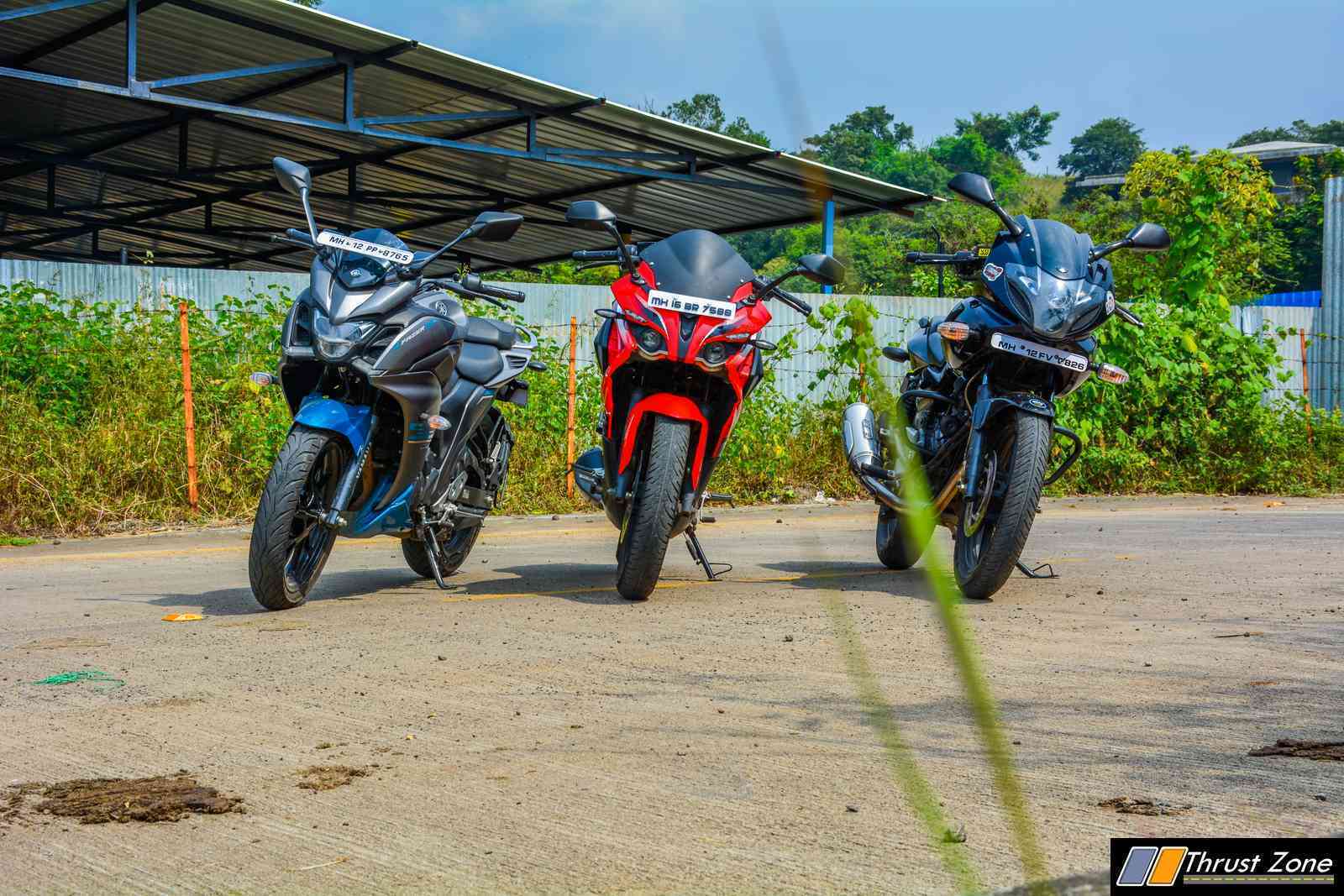 Quarter-liter motorcycle segment has always been the most happening segment ever since the Honda 250 CBR came in 2011. The big boom started when KTM launched Duke 200 in the country. Post that Bajaj launched the Pulsar 200 NS and give enthusiasts the option we always deserved. Nobody really came after that in that particular segment, but instead went higher and offered 300 and 400 cc motorcycles. Bajaj did give us variants of the Pulsar 200 NS such as the AS200. But there has been a bike since 2009 which is dominated the sale start for Bajaj and that is the Pulsar 220. Original touring machine along being a street fighter as well.

Bajaj tried to replace that with the AS200, but that did not happen. Bajaj went on improving the 220 in terms of refinement and made it a compelling package for many entry-level enthusiasts even today. Yamaha wants to challenge that market with its new FZ25 based motorcycle call the Fazer 25. However, it also has to fight a similar Bajaj product that has been ruling this segment for quite a lot of time. The RS200 which has everything a modern day bike should have. We ride these motorcycles back to back to tell you which is the ideal choice for you. 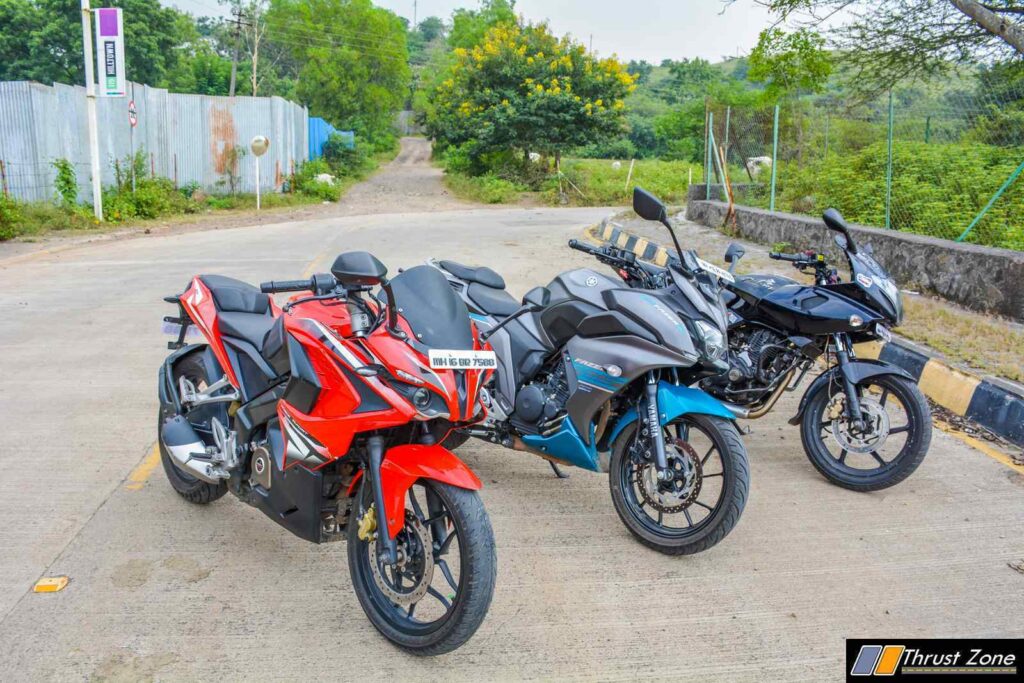 When it comes to styling all these three bikes do not have particularly a very stunning face. All of them have been termed quirky in one way or the other. The side profile is where the Pulsar220 scores high. Pulsar 220 looks muscular without showing much age. RS200 side profile is very busy with cuts and creases along with large panels have multiple colors and graphics to soak in. The rear tail light design on the RS200 continues to be a matter of concern for a majority of the people out there. Tail light on the Fazer 25 continues to look a replica of the Apache 200. Meanwhile, the Pulsar continues to have a decade old design when it comes to the tail light with its twin dagger design.

All bikes have good quality Switchgear with engine kill switch. Pulsar RS200 switches are blue while the P220 switches are white backlit. All bikes have comfortable seats for Rider as well as pillion but only for short Journeys. The Pulsar 220 surprisingly has the most loaded instrument cluster of the test meanwhile Rs200 scores level with the Fazer 25. Both Pulsars have analog Tachometer while Fazer25 has a digital tachometer. 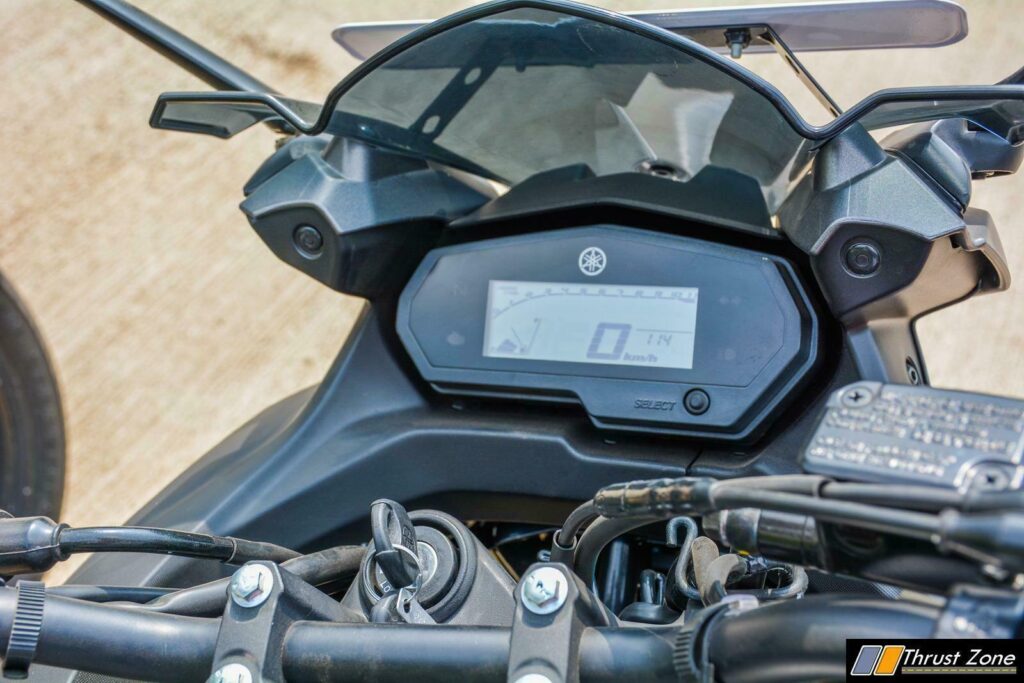 Pulsar 220 does not show the clock, but the Fazer 25 in the RS200 show. They all have twin trip meters on offer. All bikes have great lights to offer but the RS200 just makes night into day (Its big brother won’t like this statement) with its twin projector setup over single one seen on the 220. Fazer25 has LED lights and it does a good job as well, but it could have more spread on offer though. 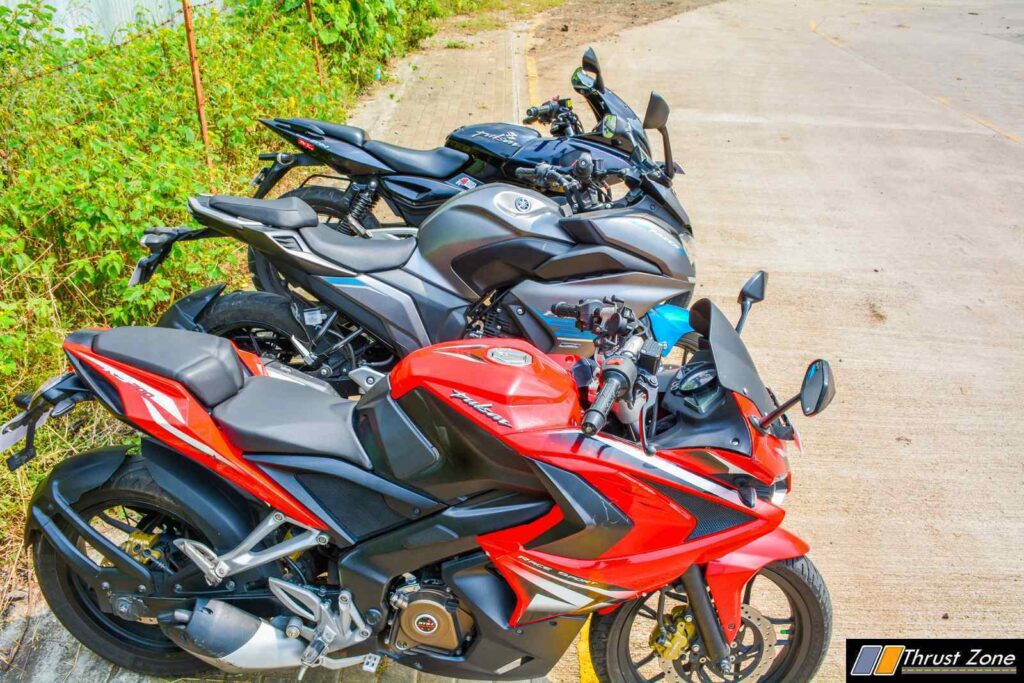 All bikes have comfortable riding position, but the Yamaha Fazer 25 score higher with a raised handlebar lower seat height with center set footpegs. 220 has a lower set clip-on which center set footpeg and a higher riding position. Rs200 has raised clip-on handlebars and Lower seat with slightly rear-set footpegs. The rear view mirrors are useless on the Pulsar 220 but work on the RS200 as well as the Fazer 250. All three motorcycles have good seats on offer. Pulsar 220 seats could do with better padding though. 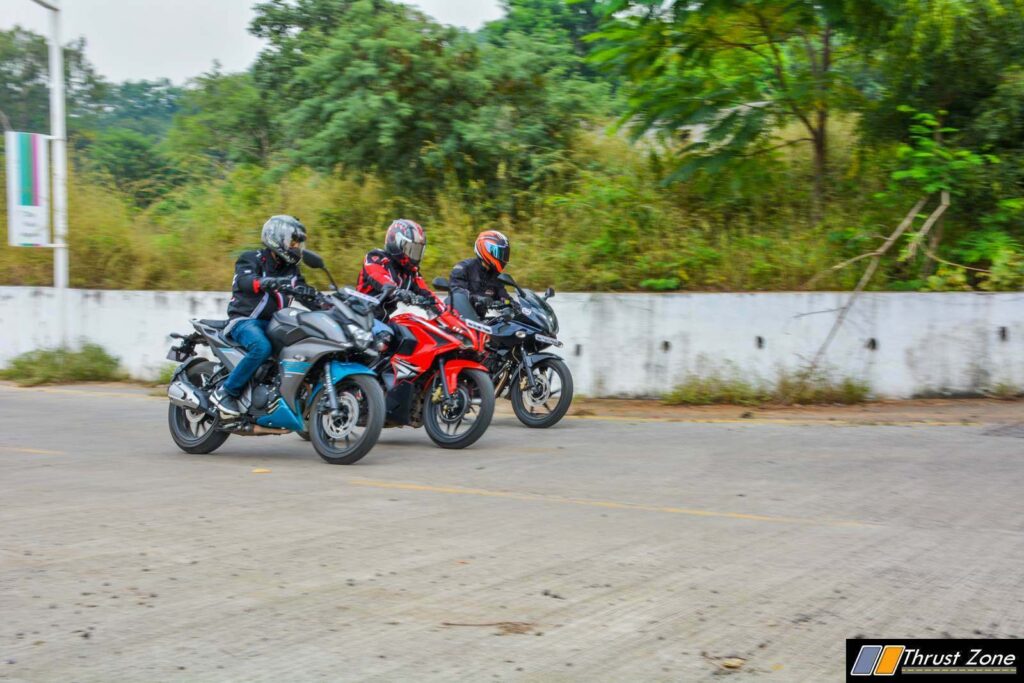 When it comes to performance the Fazer25 and Pulsar 220 share similar technology. Something which is the disadvantage given the time frame of these motorcycles is a decade when compared. Both these bikes used two-valve oil cooled engines mated to a 5-speed gearbox. Both bikes offer more than adequate low and mid-range power. Top end power is good as both bikes have a top speed of 135 km per hour.

However, Fazer 25 feel much better because of the much better gearing. A narrow RPM limit coupled with neutral gearing which is not short or tall mix it an ideal bike to deliver drivability in every regard. Fazer also score better because it makes more torque in the lower half of the rev range. Pulsar 220 can compete with the Fazer25 but is slower of the line by a good two seconds at 12.6 seconds while Fazer does it in 10.7 seconds to 100 km/hr.

Meanwhile, the RS200 concentrates its power in the mid-range and top end of the rev range. Thanks to taller gearing, 6-speed gearbox and the way the motorcycle has been tuned to deliver. The Pulsar RS200 is a screamer till the red line. The motorcycle does 140 km per hour and reaches 0-100 km/hr in 8.5 seconds. Overall, both Bajaj bikes did rattle a bit from the fairing area, but far less than what came in 2008 and 2014 (220 and RS200 respectively).

Fazer25 was vibe free and smooth all throughout hence made it a compelling tourer, something that it wants to be. Both Bajaj engines are also much refined than before as Bajaj continues to silently update them when it comes to increasing refinement levels and decreasing NVH levels. Overall, just like FZ25 is commendable in performance as it strikes the middle cord between these two when it comes to numbers and the way Fazer25 delivers its power. Pulsar 220 and Fazer25 sound throaty enough with their exhaust note, but Yamaha is more soothing. RS200 screams and replicates a single-cylinder that is far racier and electric in the way it sounds. 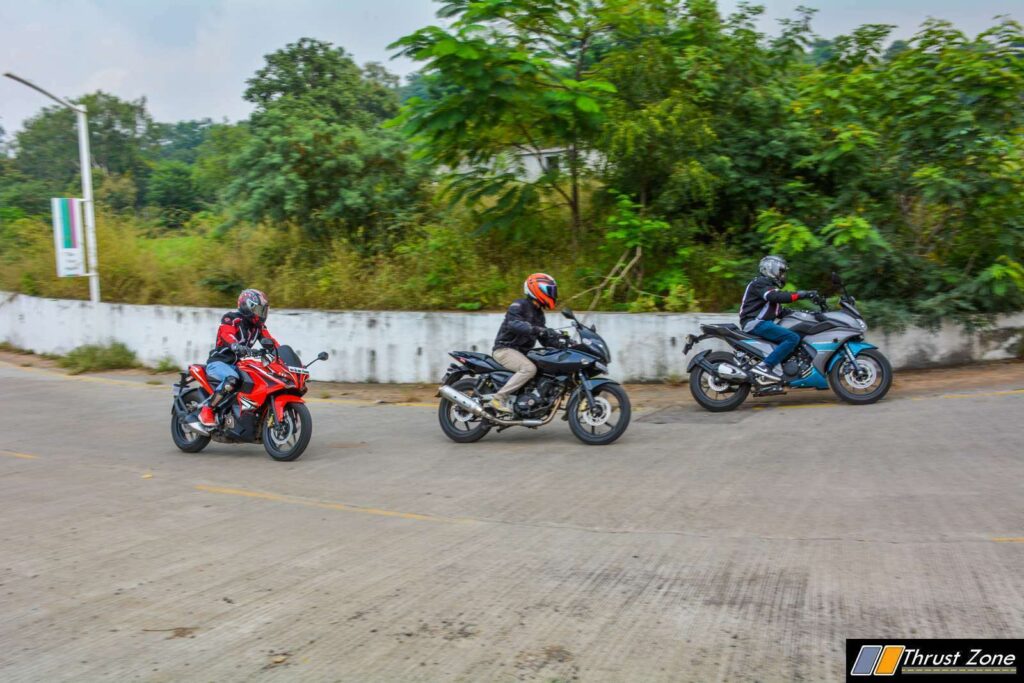 Pulsar RS200 on paper sounds really tempting. Perimeter frame, gas charged mono shock and fat front forks say this the real deal. In real life, it almost is. The front feels a bit heavy but not very heavy like the Pulsar 220 for example. Which is also a part of this test surprisingly after all these years. Pulsar 220 is clearly the alive and kicking grandpops here. However, the stability is excellent, the chassis is very forgiving and will eliminate all your mistakes and make you feel like a pro. The extra weight and stiff suspension handles everything. Bad roads, good twisty and straight roads RS200 does it all. RS200 is agile in the corners, almost nimble in the city traffic and stable on the highway.

Pulsar 220, on the other hand, is front heavy, long wheelbase means it doesn’t turn as fast it should and isn’t exactly agile or nimble in the city (only when pushed a bit hard that it feels the said things earlier) However, it is stable on the highway as the front-end doesn’t go for a toss. 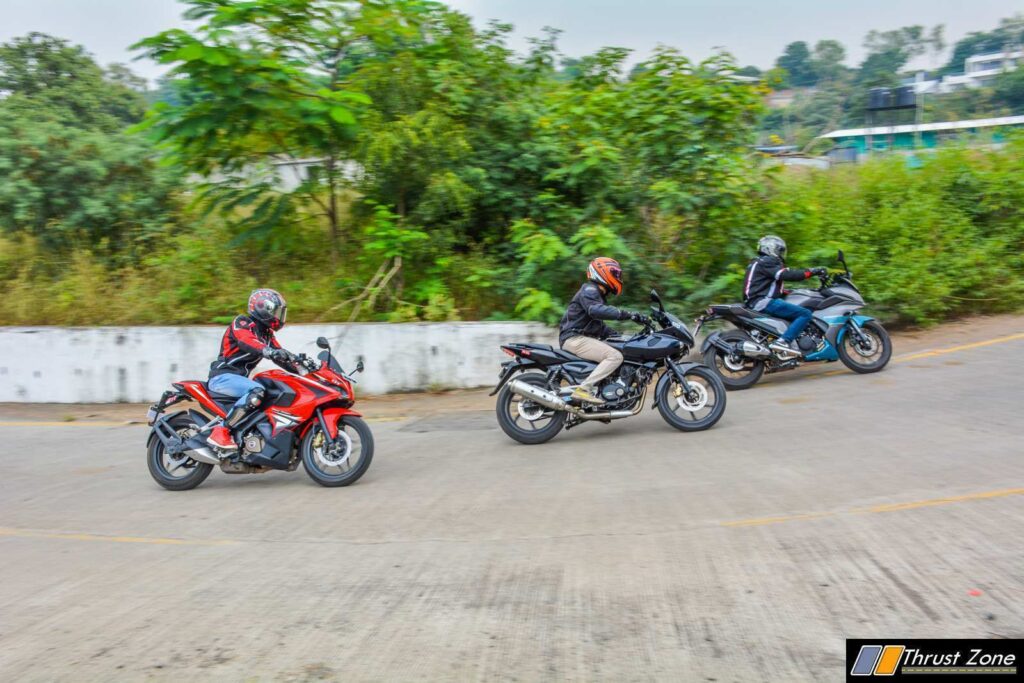 While both Pulsars have some different character on offer, Yamaha offers usual Japanese traits. Agile in the corners, nimble in the city and almost stable on the highway. The problem is that it doesn’t steer as fast as it should and chassis feels commute-rish than sporty. Something we pointed while testing the FZ25 and comparing it as well against the Apache 200. It isn’t exactly as playful as it should be. This means all motorcycles end up offering good ride quality despite their different characteristics. All bikes have good tyres. Yes, P220 has the tyres that help its game well with the old chassis. 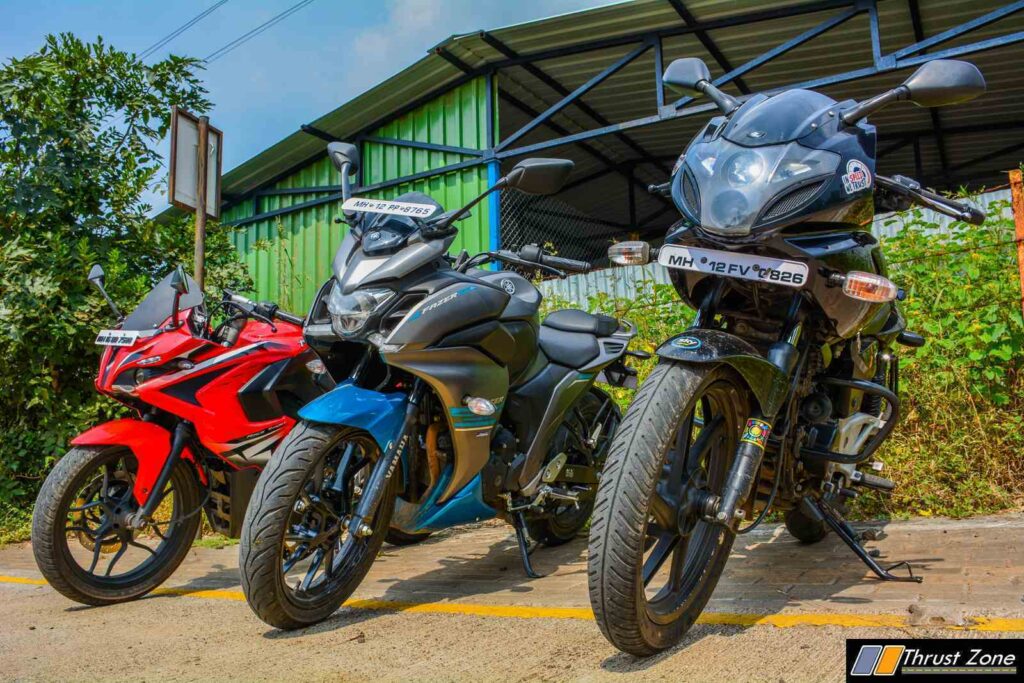 It is one of those days when it’s difficult to get the right winner out because every bike here excels in one way or the other. You as the potential buyer needs to choose your need despite the segment is the same. Pulsar 220 is iconic bike and is ageing well and now given the fact that the Fazer25 is quite similar on paper. Real world says that the Yamaha Fazer25 is better because it still has better dynamics and engine to live with.

RS200 has everything but feels racier with its power focused on the top-end. When it comes to pricing, the RS200 continues to undercut the Fazer25 which seals the deal for budget enthusiasts choosing between two. However, if your budget is really tight you can go for the Pulsar 220. However, the recent entry in the commercial segment of the iconic bike does leave the potential buyer confused. Hence, the right balance of everything in the Fazer25 makes it appealing. It only lacks ABS and if you need that, RS200 is there and doesn’t raise your budget that much too, which makes it a winner of this test. Our personal money would be on the Fazer25 though.