A top of the line, white Creta SUV in Automatic form, which had the distinction of creating history in Hyundai. The 7 millionth car, rolled off the production lines was none other than the Creta which marks a historic landmark in the Korean car maker’s history. With this, Hyundai Motor India has achieved the distinction of being the second best position amongst its overseas peers that are present in the country. The news is that only after China, in the entire Hyundai Motor Group worldwide and the first auto manufacturer in India to achieve this feat in a record time of 18 years of commercial operation. This is proving once again that Hyundai in India can cross the 1 million mile stone, at an average of every 18 months that it has projected for the future in the past.

Previously Hyundai HMIL rolled out its first million car, which was the humble Santro. This happened in the year 2006 just 8 years after commencement of commercial production of the Santro in 1998. Thereafter, the production picked up momentum, with the next million sales milestone being achieved within an average of 18 -19 months. The 5 millionth car was flagged off in October 2013 by the company’s new brand ambassador Shahrukh Khan at that point of time. Hyundai is congratulating employees on this very significant achievement along with the trust the customer has had on its brand. As HMIL continues to offer quality and customer satisfaction by introducing new products with new technology and design in the Indian market. 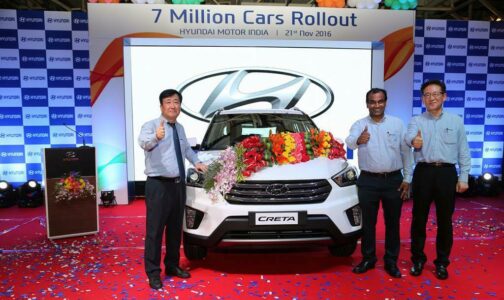 Hyundai’s vision as announced during our 20th year of foundation on May 6th 2016, of being the Market Leader. Hyundai wants the company a Great place to work at and touch the 10 million units within the first half of 2021. Hyundai has also has held the top exporter position consistently for 12 years since 2004 with a volume of 24,64,723 units to date, while being instrumental in making Chennai port vibrant. The economic development of Sriperumpudur region was done by Hyundai as contributing to the exchequer and generating employment opportunities, both directly & indirectly. A slew of products linedup for 2016 and 2018 should help the brand reach its target as it goes strong despite many hurdles thrown at.