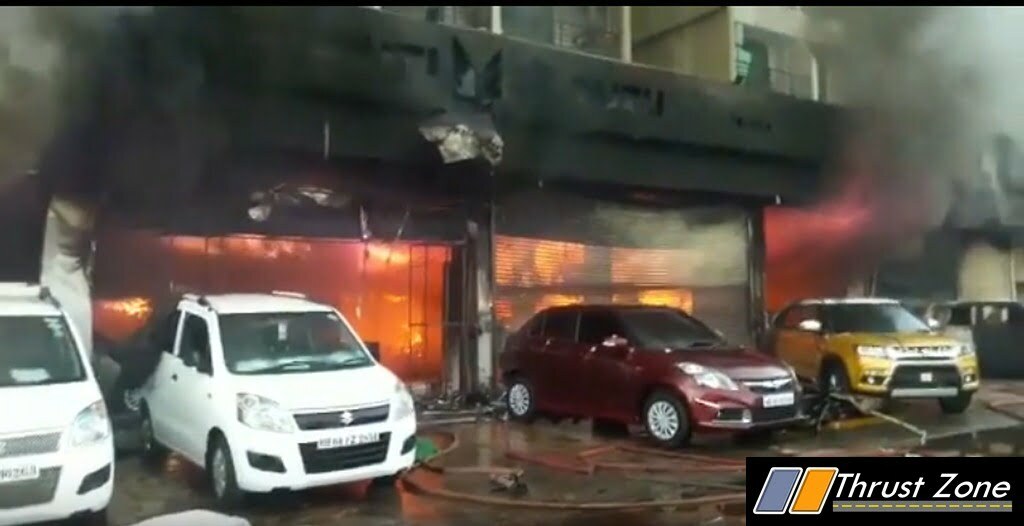 Kharghar Nexa Showroom is not more than two years old, catches fire due to short circuit

What surely is a horrific situation, the new Nexa showrooms which are known to add cool quotient to the Maruti brand as it now sells most of premium cars from these showrooms has caught fire. The news confirms that it was done due to short circuit and the fire engulfed the entire showroom within minutes. Since the fuse box caught fire in the very early hour of the morning, no body could stop the small fire and the entire showroom caught fire within two hours. In that time, Maruti employees tried saving as many cars as they could but still there is reported damage to 17 cars inside and around the showroom. However, unconfirmed news suggest more than 25 cars could have been damaged. The showroom is just two years old and is right bang on the Sion-Panvel highway where most of the car showrooms are in the area.

The Nexa showroom is in residential complex which seems to have reported the situation at around 5:15 am to the officials who came some time later and doused the fire within two hours. Officials confirm two people are dead who were guards of the showroom named Krishna and Jitendra. It was only three hours later, officials could get inside and recover the bodies and assess the damage. The damage is enormous as the entire showroom has been burnt down completely. One can hear the pops and bangs which are mostly the fire taking down the electrical of the showroom.

The AutoVista Nexa showroom officials admit most damage to the cars is beyond recognition. Maruti has two Nexa showrooms in Navi Mumbai and both of them are in prime locations. Police is saying this is not a case of arson after fire officials confirm the fuse box was caught fire as it spread and burnt the showroom down. There is no one to blame here and it is truly a freak accident which has taken lives and caused damage which will take a lot of time and money to be repaired.

Dominar Domviel Kit By Autologue Has Four Things To Make It Look Like The Ducati Diavel!!