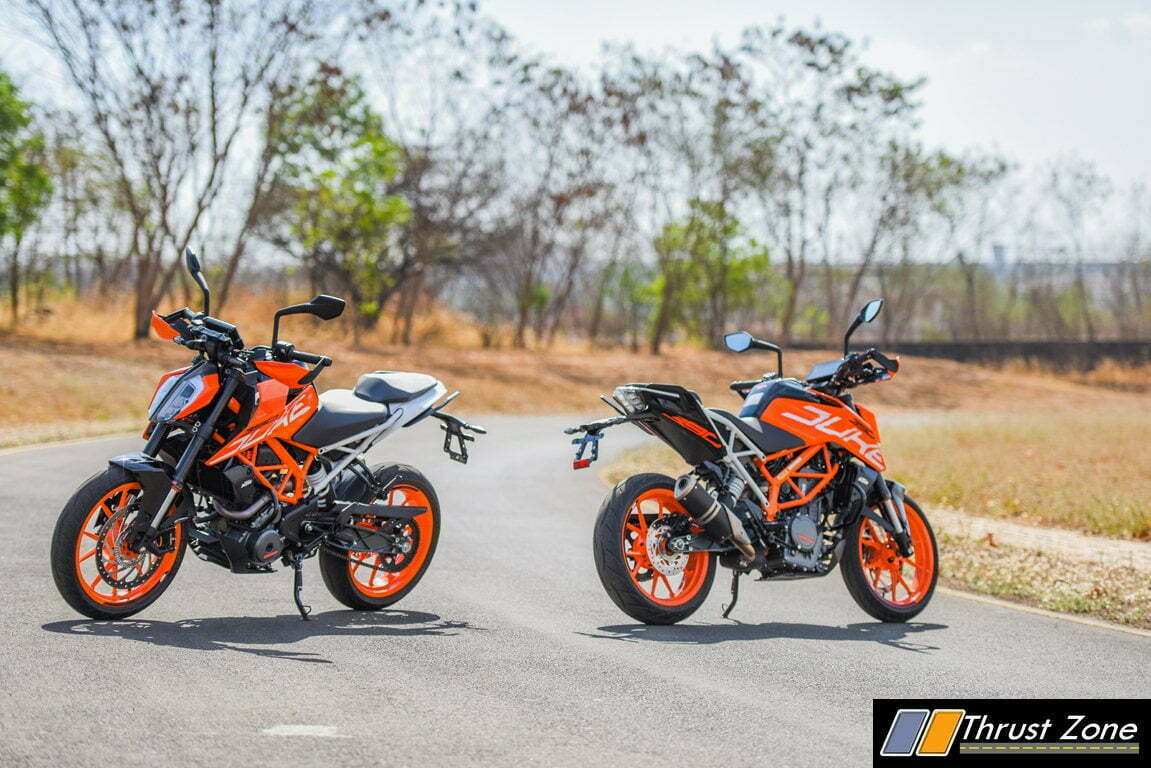 This 2017 KTM Duke 390 review comes from our experience of owning the previous generation for three years. So, is it worth the upgrade, should we replace it? All the answers here!

As you all know by now, KTM is on an aggressive streak in the country. It upgraded the RC series that we did not get to ride thanks to KTM. Later they launched the 2017 Duke range in the country which included the Duke 250, a significant development that we broke to you before anyone else. The Duke 2017 range has been priced as well as before and the Duke 250 and 390 steal the show as they are new motorcycles from grounds up yet are set retain the fun riding experience. The Duke 200 gets lost in the crowd despite orange treatment that it gets. However, all that we covered in our review last week and today we are at Chakan again, a little late thanks again to KTM to test ride the Duke 390. The motorcycle that we have owned since the last three years. We put quite a few laps on the motorcycle and we tell you has it lost its quirky character in the quest for Japanese alike refinement and how does all of the changes add up together. Styling wise, the motorcycle is same as the Duke 250 that we saw earlier, however, it gets orange wheels, chassis and a white new subframe which is now a split unit. The split seats and the cowl along with the new tail-light make the rear of the bike look more substantial than before. The new color scheme which is electronic orange along with black is new and shouts loud that this is the new generation bike. 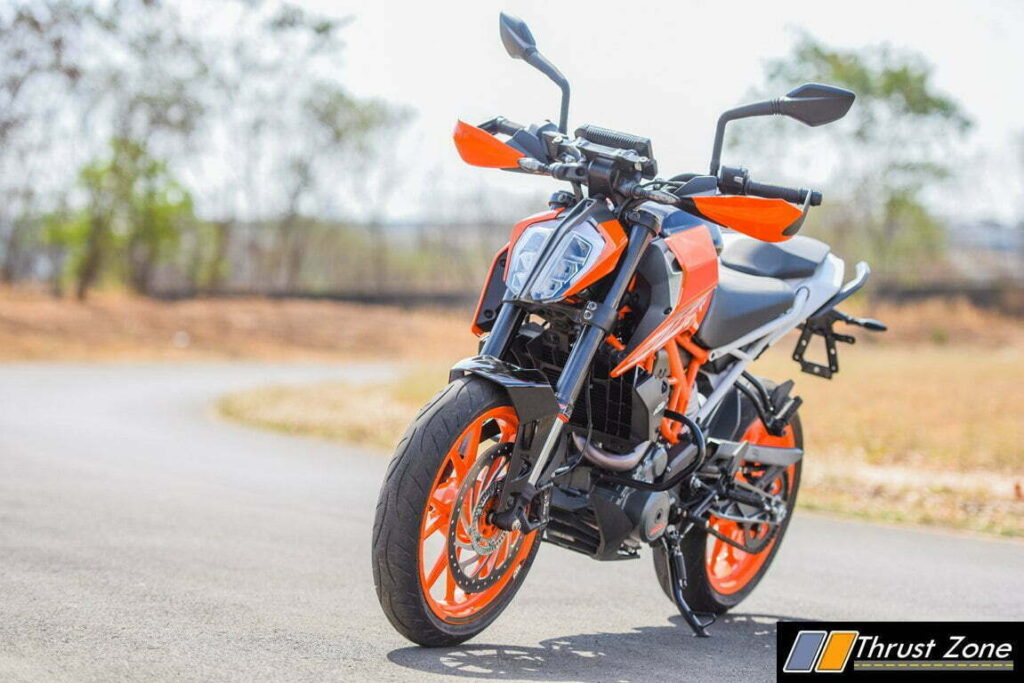 The headlights as seen in the pictures, steal the show as they are LED units, which is also a split unit which is form and function both. The front mudguard has changed and looks more chunkier. The alloy wheel design sadly remains the same. The tank extensions, the slightly shorter profile of the motorcycle make it look purposeful and only feels like a big single the moment you start riding it. Overall, the motorcycle does look rather great and there is hardly any room for error this time. Ergonomics has changed because the tank, seat and foot peg positioning has changed. You get a lot of room to move around as you can lock your knees with the new steel tank properly, the large and wide seats are extremely accommodating and very comfortable for short and long distances. The legroom offered by new position of the pegs despite rear set is great as the seat height is higher and pegs are mounted smartly as well. The mirror stalks has increased as the handlebar has been mounted lower. Rider weight now falls on the handlebar and which takes away the stress from major upper body parts. Overall, another weak point has been sorted by KTM for 2017 Duke 390. 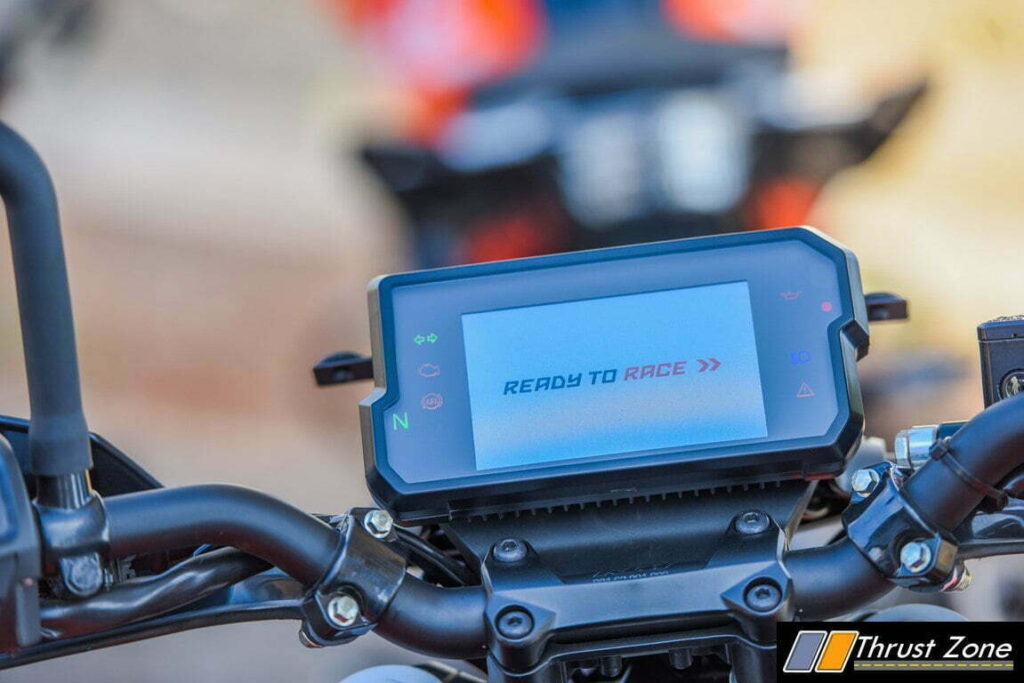 Now hold your breath as we explain you the loaded to the brim instrument cluster of all time, at least Indian motorcycling history. There are usual tell-tale lights which is now joined by oil pressure indicator which was missing. There are the usual odometer, digital speedo and tachometer. However, as you can see they look so much different. The RPM lights changed above 6000 RPM, the fonts get bigger as the speeds gets higher. There are three colors to choose for the RPM lights. Trip meters are not your ordinary units as they are combined together to show you things such as average speed, fuel efficiency, trip time and fuel range. You can then customize what things you want in your trip meter list. The list includes things such as battery voltage, fuel efficiency parameters, everything can be changed to your specification. There are two trip meters, so you can have all the information listed displayed in both trip meters and you can see them on the fly. You can pair your phone via Bluetooth and it will show which song you are playing through your headset or earphones in the KTM MY Ride mode. Since its a Bluetooth system, it will show how much your battery percentage is as well. A call be received and disconnected and the user calling can be seen on the screen. Setting option as you can see in the picture allows you to choose units, miles or kilometers, adjust DRLs. 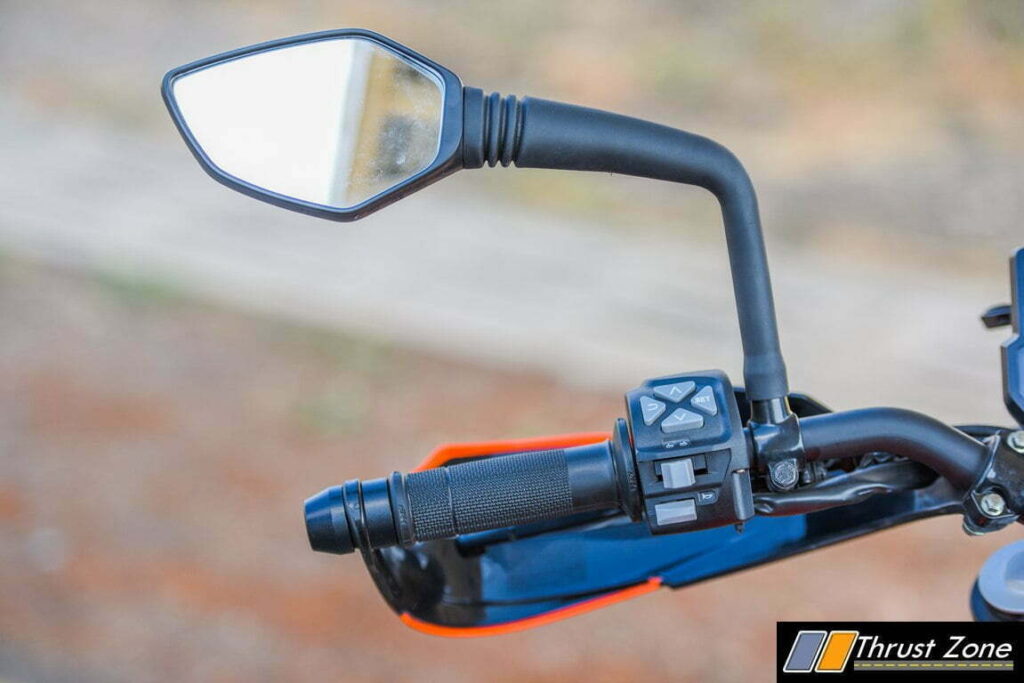 It also allows you to adjust ABS that can be on road mode, which is dual channel mode, off, which isn’t legal as it is 2017 and Super moto which allows to disengage rear ABS if you do off-road or shenanigans. Everything is controlled by four new switches on the LHS switchgear. The high-beam button, pass light button are one unit and is placed behind like the big bikes. The RHS remains the same as any other 2017 unit which is devoid of headlight button. 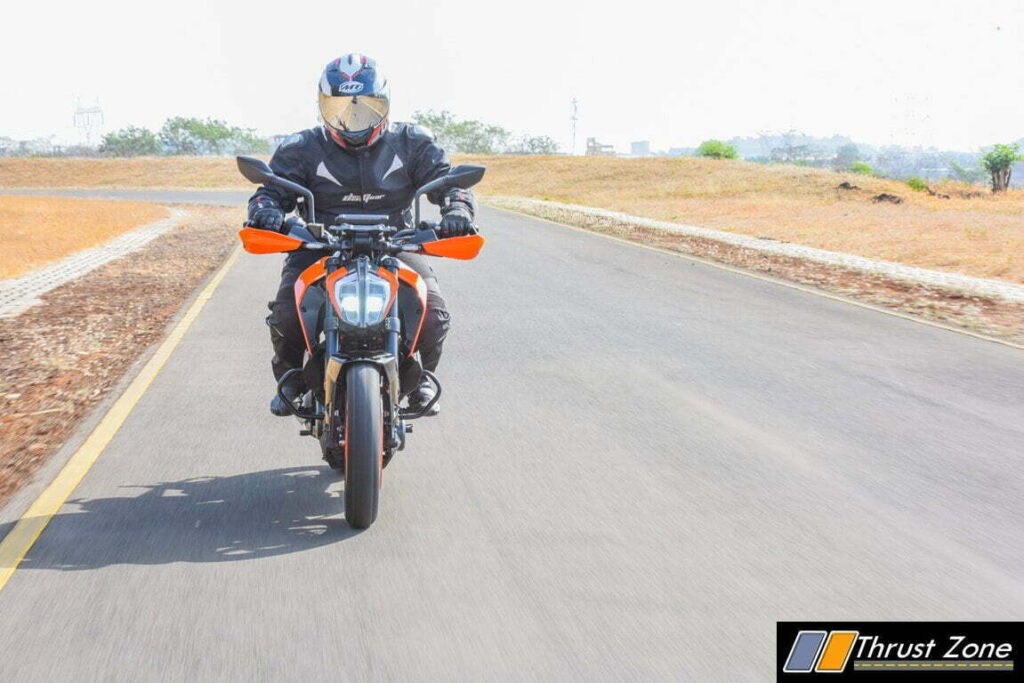 The engine is what made the Duke 390 special, despite several flaws the last generation model had. The over heating, the burning of calves and then later that can be served as a tandoori. The subtle buzzing from all areas of the motorcycle, the jerky fueling, the loudness and not so pleasant soundtrack and more. Glad to report all of that has been taken care of. The NVH levels are downright brilliant now. The engine is the same on paper, but now makes 43.5 BHP and 2 Nm of torque increse, which means it makes 37 Nm of torque. Both are delivered at the same RPM as before too. Sound track is better, but now more generic aka, much more Japanese than before. 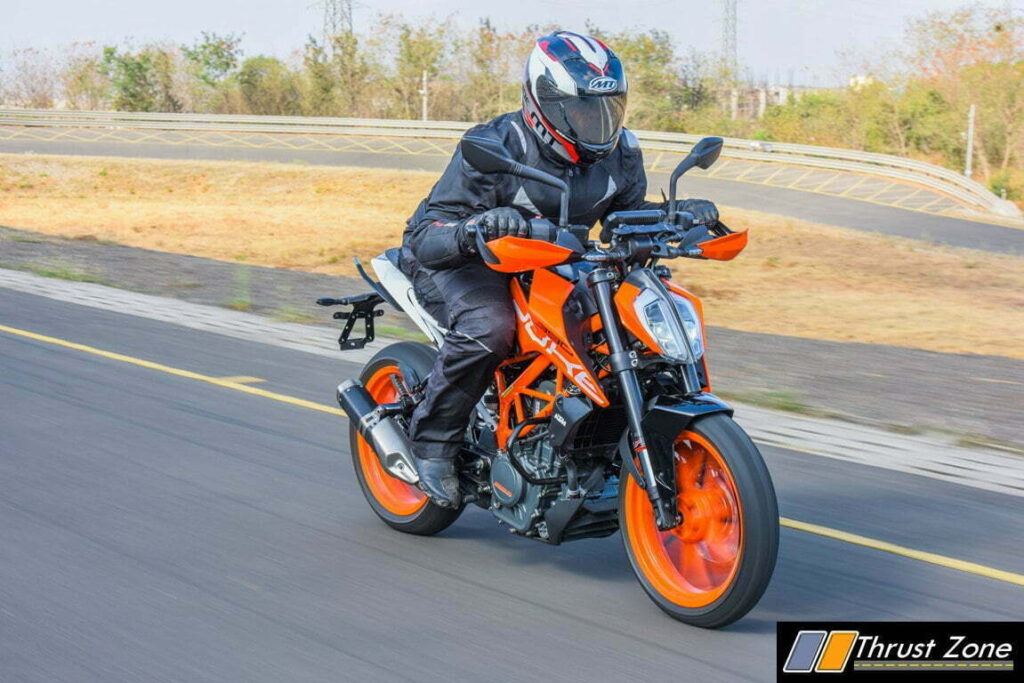 Engine is creamy smooth, ride by wire throttle makes things flawless and the entire motorcycle is now more docile thanks to improved fueling. Engine remains high on reliability and performance tech with DLC coated finger followers, Nikasil and forged piston are part of the list. KTM has increased the size of the airbox by 2mm which has helped them get better numbers than before. EVAP system used for emission purpose saves upto 5-7% of fuel too. There is now torque everywhere, there is knocking in high gear and lower RPM’s but if you proceed without downshift, it won’t kill the engine abruptly and it will rather gain speed. Gearing remains near identical, but the sprocket is down one teeth to provide more top and mid range power. Duke 390 continues to provide a lot of that and still continues to be a highlight of the motor. Post 5500 RPM, the motor pulls hard and fast till 10,000 RPM. 0-100 km/hr should be in the same area, which is way under 6 seconds, we saw a top speed of 158 km/hr on the speedo which was quite impressive for a new motor. 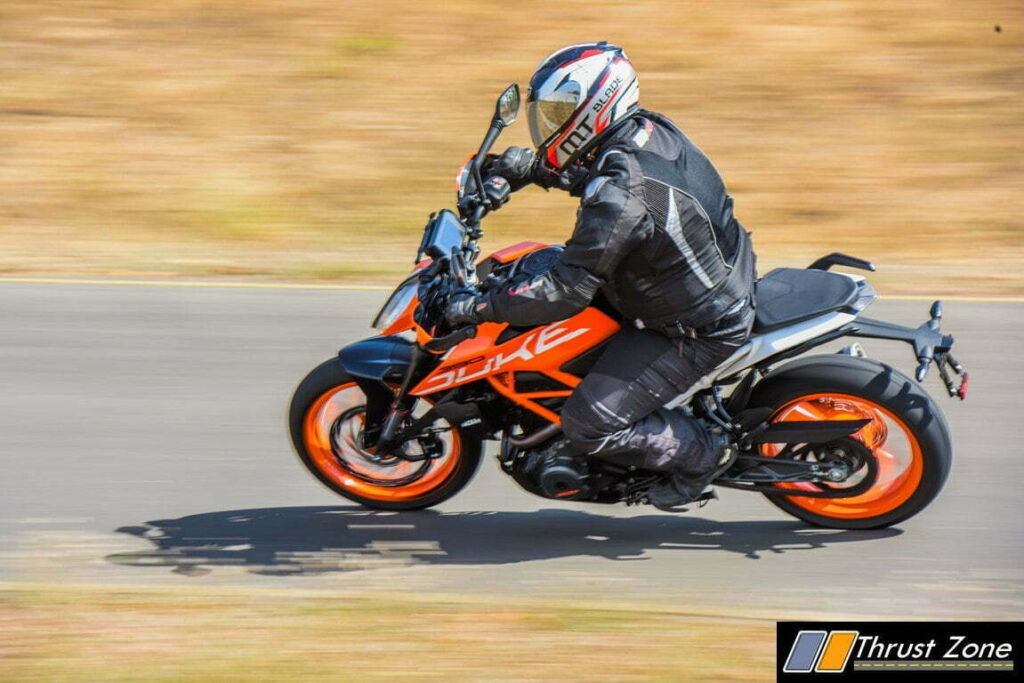 As we know, Duke engines take time to open up and this should go higher than the previous bike or stay where it is. Performance increase isn’t what we are looking at here, it is the refinement, the docile nature, the fantastic NVH levels which makes the Duke 390 a motorcycle to be considered by everyone, rather than few individual souls who care to hurt themselves on a daily basis while riding the older generation motorcycle. Touring just got a lot better on the Duke 390 as a result. Slipper clutch makes the clutch lever light, gearbox is smooth. We wished slipper clutch was better at serious hard downshifts though. 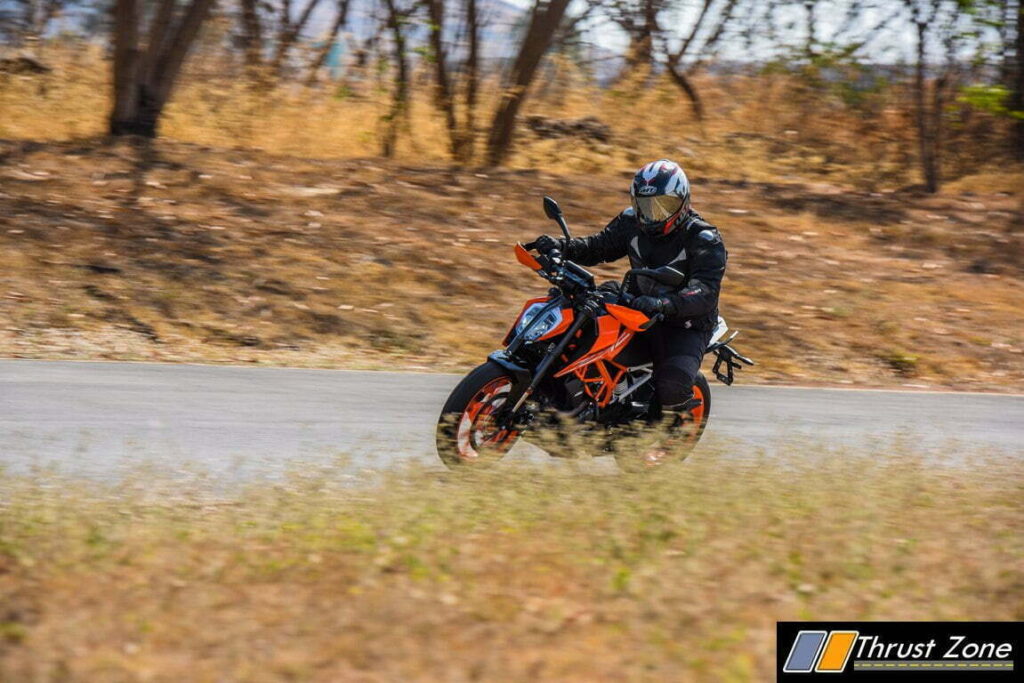 Dynamically, the game has changed too. The suspension travel has dropped by a good margin on both ends. The suspension is different as well and is now adjustable on both ends for preload. The center of gravity is lower than before and mass centralization continues as before despite exhaust canister that has been introduced. The handlebars are new and they are set lower and as the rider sits above it, there is a lot of feedback in the corners from it. The last generation was purpose built high center of gravity motorcycles which were great on agility at any given speed. This time, the big change makes the motorcycle more docile and novice friendly. 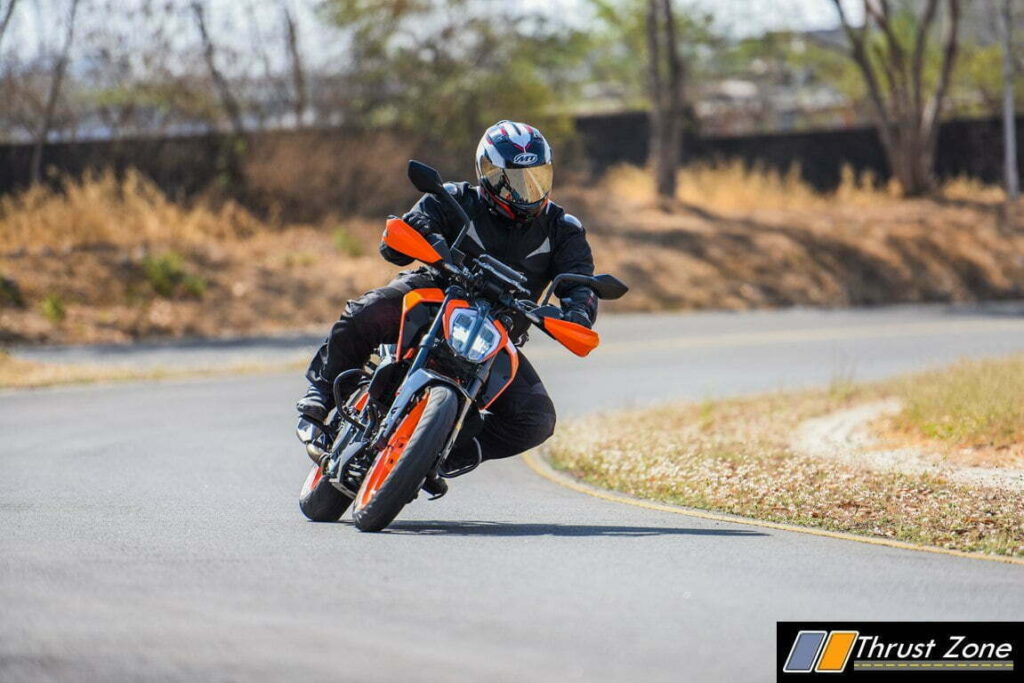 The suspension is very mature and feels composed than before. Previously, one would almost make you feel every pebble on the road and harsh ride would make things even worse. This suspension feels supple enough, but road test is needed to clarify. The rake degree remains at 25 degrees, the wheelbase is shorter by 10mm and this means the bike is more agile in the corners than before too. Despite the 5 kg weight increase, there isn’t anything that is felt.

Engine takes care of that power by adding 2 Nm to the package. Tyres continue to be Metzeler, the H rated tyres are said to last longer and provide almost identical levers of grip at the same time. Previous tyres were over engineered units, this time they still are above the requirement, but by a subtle margin, not huge. 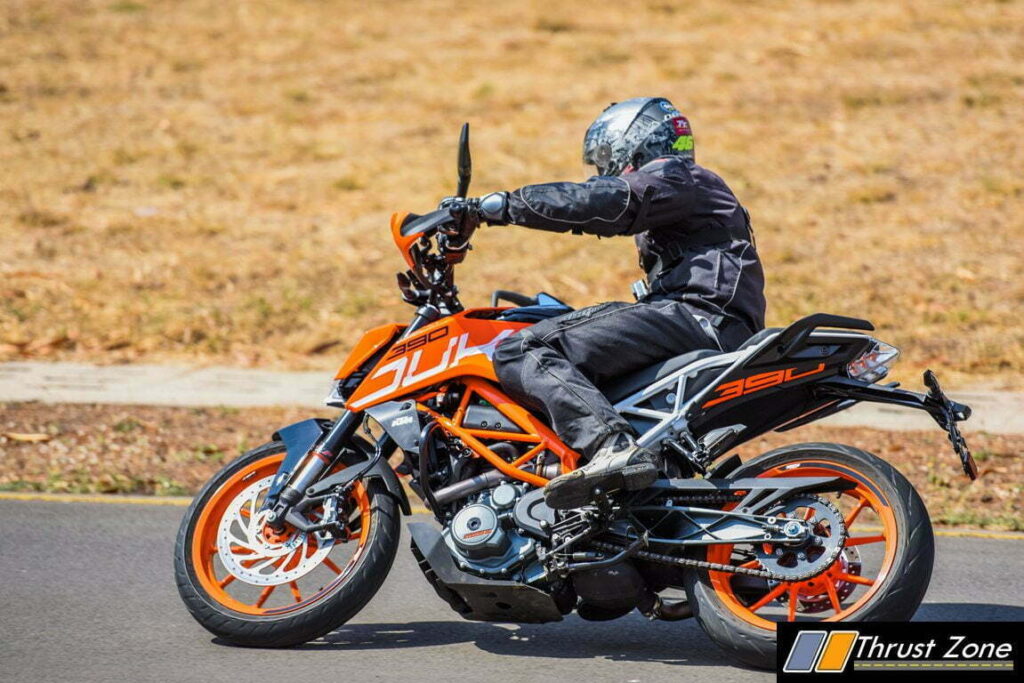 The suspension has been tuned to make it disappear. What has changed dramatically and for the good is the braking. The disc brake is now 20mm bigger and the revised caliper and master cylinder at the top along with adjustable levers have changed the braking by a humongous margin. The initial bite is in SURPLUS and there is a lot of progressive braking power post that. ABS pulsing has been minimized as well which is another great feature. We were among the bunch of people who were quite excited for the Duke 390 to come in the 2017 avatar. The motorcycle is refined, docile and much easier to live with than before and that is a good thing. Bajaj-KTM are putting a lot of emphasizes in safety when it comes to their 400cc models. 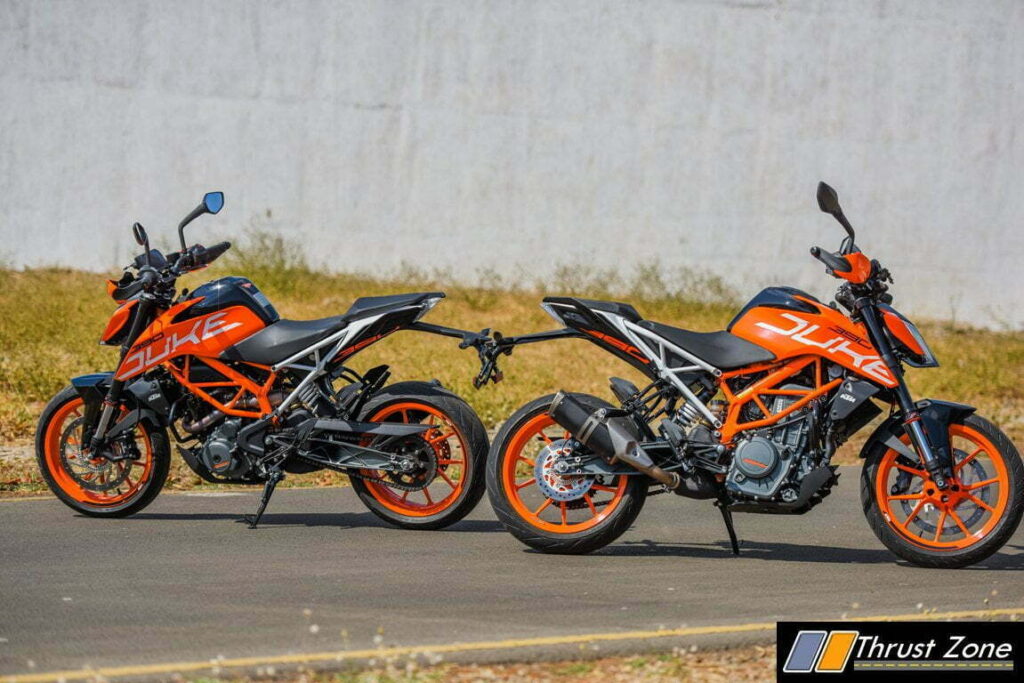 LED lights, meeting emission and safety norms before time and offering high tech features to make sure they stand out and provide riding pleasure at its best. However, KTM could have done more and offered more performance from the same engine that we see from the past. Apart from that, the Duke 390 continues to be stellar value for money package which has everything you would ever need. So, let’s finish it by saying the obvious, The king is dead, long live the king!

Kawasaki Ninja ZX-10RR Makes it Debut In India At Rs. 21.90 Lakhs – Promises To Be Insane

UM Motorcycle Dealership in Pune and Vasai, Strengths itself In Maharashtra