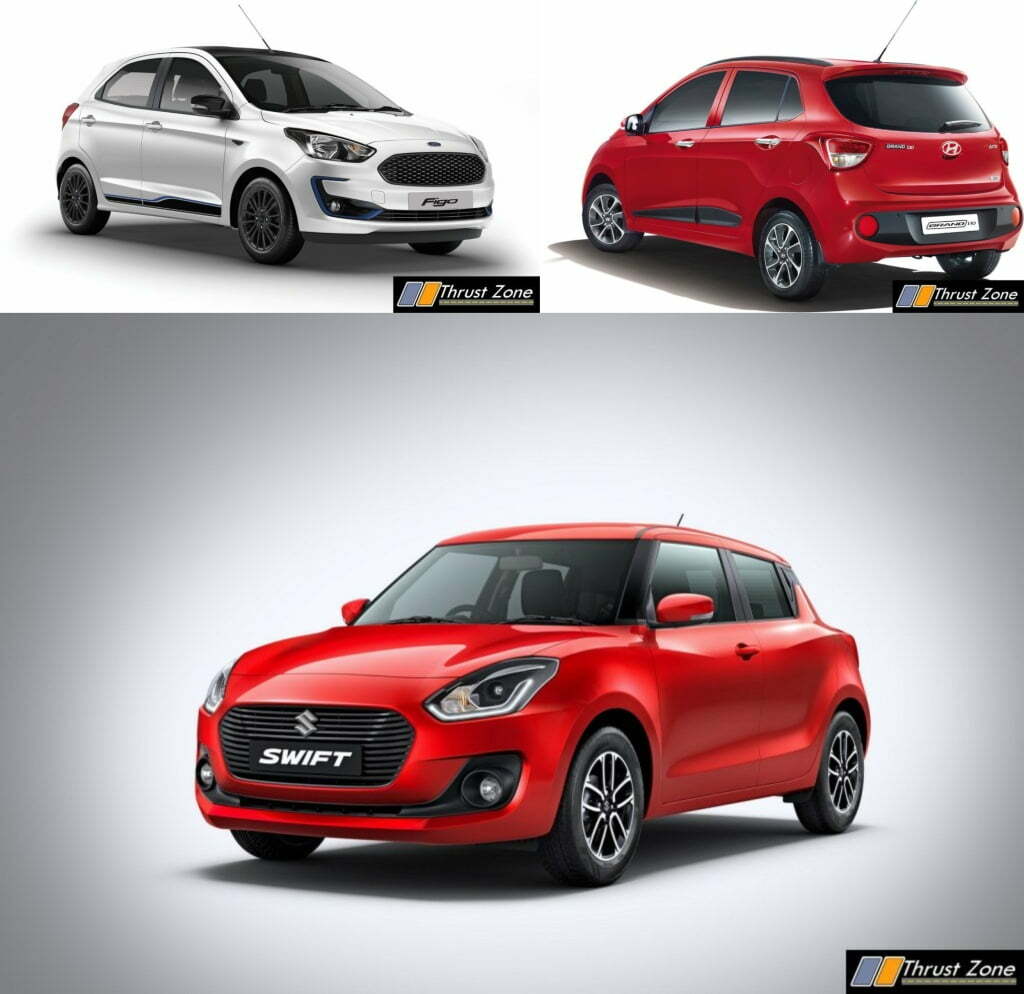 The hatchback segment in the Indian automotive scene has been evolving and is in great demand. Recently many of these hatchbacks have received many new updates in terms of design along with feature upgrades to meet the new demands. Hence we get to you the on paper comparison of the most hot selling hatchbacks in the Indian market.

Dimensions:
In terms of dimensions, overall the Ford Figo is the longest hatchback in the comparison as it measures 3886mm in length and it also has the longest wheelbase of all ( 2491mm). Whereas the Maruti Suzuki Swift is the widest of all as it measures 1735mm in width, also it is the tallest hatchback of all measuring a height of 1530 mm. Hence overall the cabin space of both the Figo and the Swift is roomier as compared with the Grand i10.

Whereas the Grand i10 gets 1.2 petrol mill that produces a bit more power as compared to the swift. This petrol unit generates 83 bhp of power and it is matted with a five speed manual transmission and gets a four speed automatic unit as option. The diesel model is powered by 1186cc that generates 75 bhp of power which is coupled with a five speed manual gearbox and it misses out on an automatic transmission.

Ford powers the Figo petrol model with a 1.2 litre unit but it generates the highest amount of power in comparison with the Swift and Grand i10. This unit generates 87 bhp of power and it is coupled with a five speed manual gearbox. Only the automatic petrol variant is powered with a 1.5 litre unit that is coupled with a six speed automatic transmission and it produces 110 bhp of power.

On the other hand the diesel model gets a bigger displacement engine in the comparison. It is powered with 1.5 litre unit that develops 99bhp of power, but just like the Grand i10 it does miss out on an automatic gearbox.

The common safety features seen on all the three hatchbacks in comparison are front dual airbags, ABS with EBD and seat belt warning system. In terms of safety the Ford Figo leads the pack as it gets six airbags on top variant and dual airbags and ABS as standard. Just behind it is the Swift as it gets Brake Assist and Child Seat Anchor Points.

Ford Figo starts at 5.15 lakhs and offers a lot of kit on the top end variant is cheaper than both these rivals. Ford offers lowest maintenance cost over these two rivals. Ford also offers 5 year warranty/one lakh kilometer in the car making is value for money proposition. Ford is the most fun to drive with powerful and efficient engines and has a better ride quality and handling balance along with safety features in abundance making it ‘the’ choice in the segment.