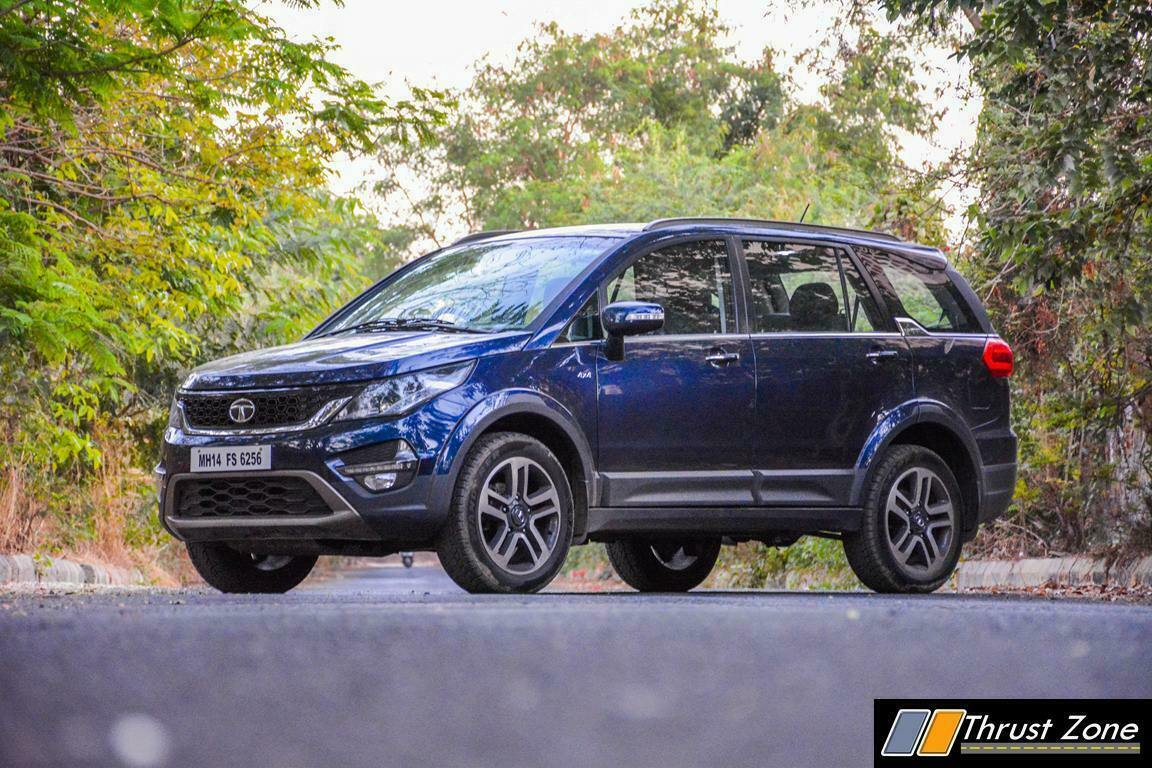 Hexa is a big come back for Tata Motors in a segment where it was unbeatable, does it have everything it takes this time? we test its mettle

The SUV segment doesn’t cease to amaze the masses and the critics. They come in all flavors and sizes. All of this started with large body on ladder frame SUV which were made by Japanese manufacturers and brought into India. Later in time, India made their own which were known as the Safari and Scorpio from Tata and Mahindra respectively. These two SUV are iconic today and still sell on image they carry along with them. However, times , they change and so does technology, while the rest of the world went with monocoque chassis SUV and made them efficient in every way, the Indian market equally loves both chassis equipped cars. Hence, the iconic SUV remains with ladder on frame chassis for its buyers. 2016 started with Innova coming then came the Fortuner and Endeavour and in the very last, we got to see the Hexa. 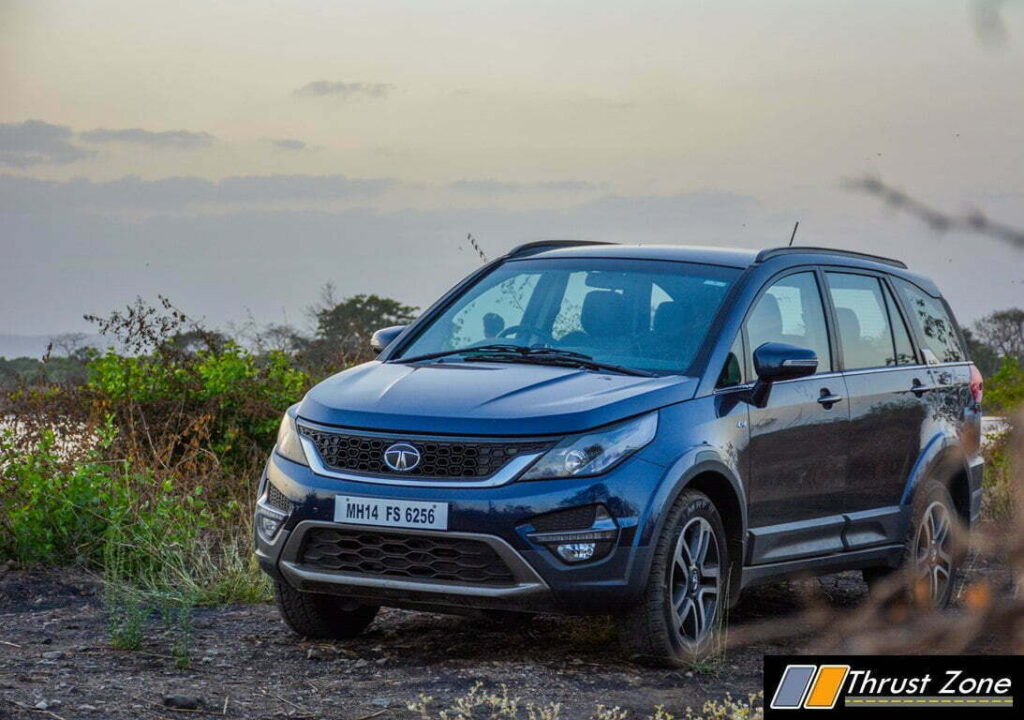 The SUV based on the Tata X2 platform which spawned the Aria as well. The Hexa is all new product with dramatic changes inside out to make it appeal even more than before. Tata has given it everything and probably lived up to the tagline of which it quotes the Hexa with, “Whatever it takes”. Does the Hexa has everything a Rs. 20 lakh SUV should have? We spend some time with the vehicle to tell you what is it like to drive and whether you should do ‘Whatever it takes’ to get this SUV in your garage! 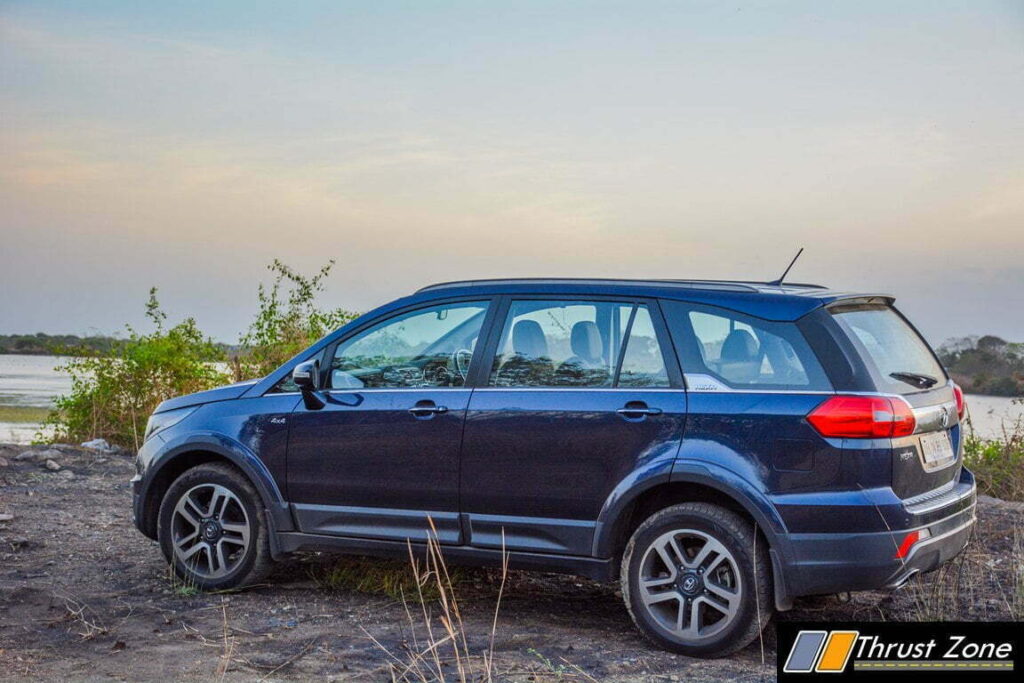 The styling of the Hexa is the highlight. The new front is bold, muscular, modern and butch, we say it is just spot on. Right mixture of everything makes it appealing to a vast majority of people almost immediately. The good use of honey comb grille in lower section of the bumper and fog lamp area makes it look quite electric while the rest of the car is all metal and glass. The side profile changes are visible when you look at the C-Pillar which has a unique kink and Hexa badging on a little chrome strip to make it stand out. The dual scheme seen on the flared wheel arches add muscle to the package. 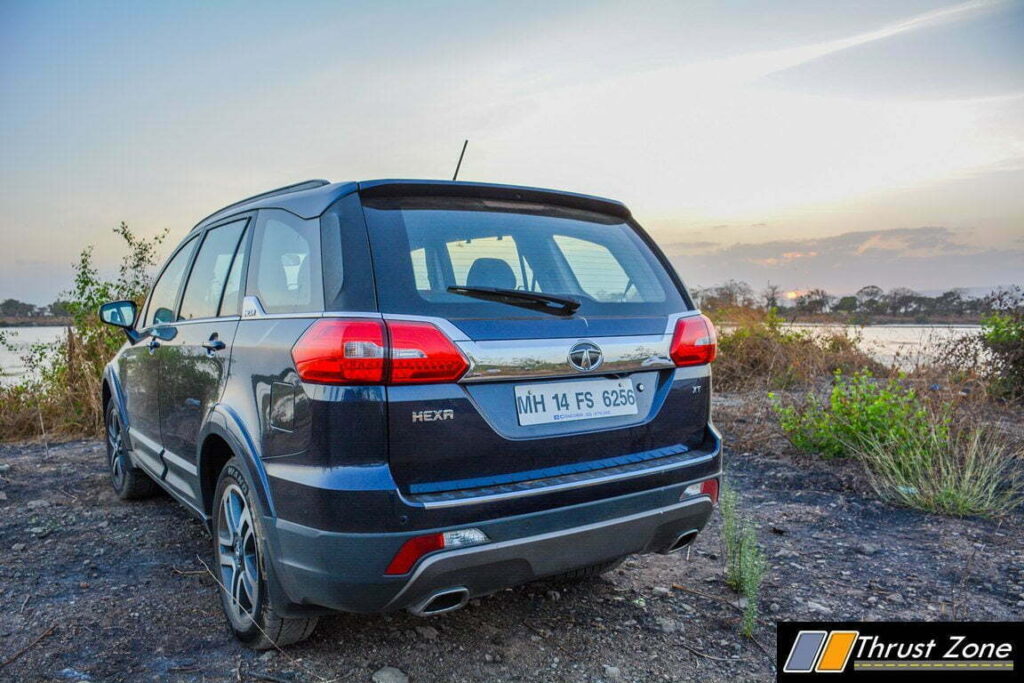 Large windows and doors along with the long and high stance makes it look like a purposeful and imposing vehicle. We can also see the other main highlight of the side profile as it has the flat 19-inch alloy wheels which add bling to the package in a rather sophisticated manner. Rear is pretty unique with large tail-lamps which are LED units and the chrome strip running at the back surprisingly doesn’t seem to be overdone this time. Rear houses two large exhaust pipes, large bumper which has been well chiseled for the job. 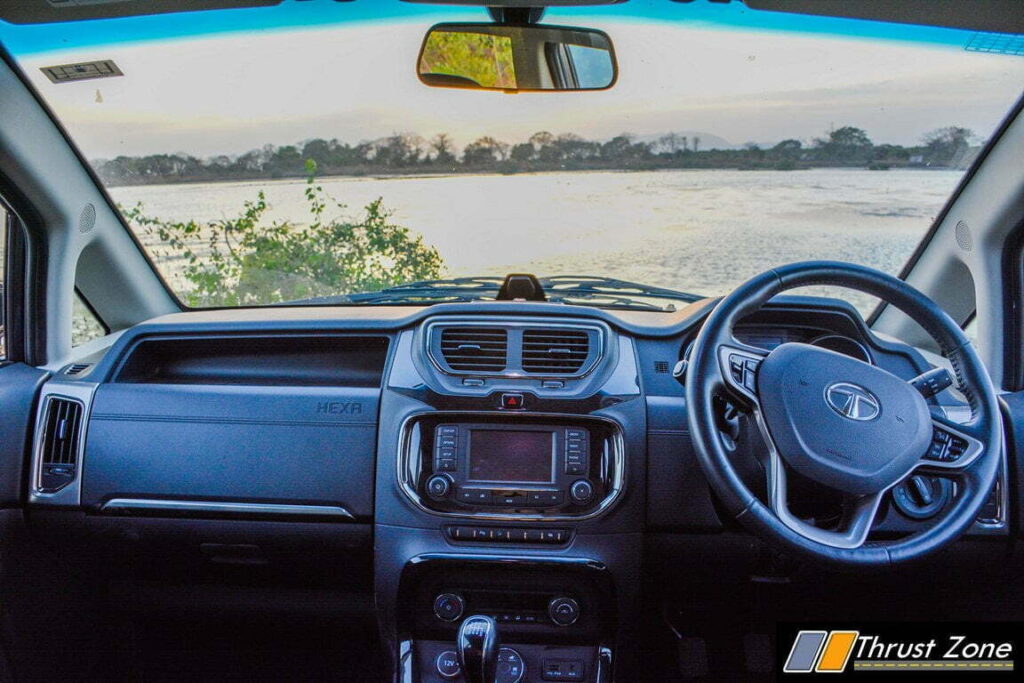 The place where Tata has thrown the kitchen sink in is the interior. The new dashboard has new better materials all around, a new layout makes it look fresh and appealing. The new screen can be seen on new modern Tata cars makes it to the Hexa, and here it is a touch-screen unit. The feature list includes connectivity options such as USB, AUX, Bluetooth and iPod connectivity. However, the touch screen is a bit slow to react and is unreadable in bright sunlight. The drive mode dial is also slow to react and takes more five seconds to engage when you shift the modes. 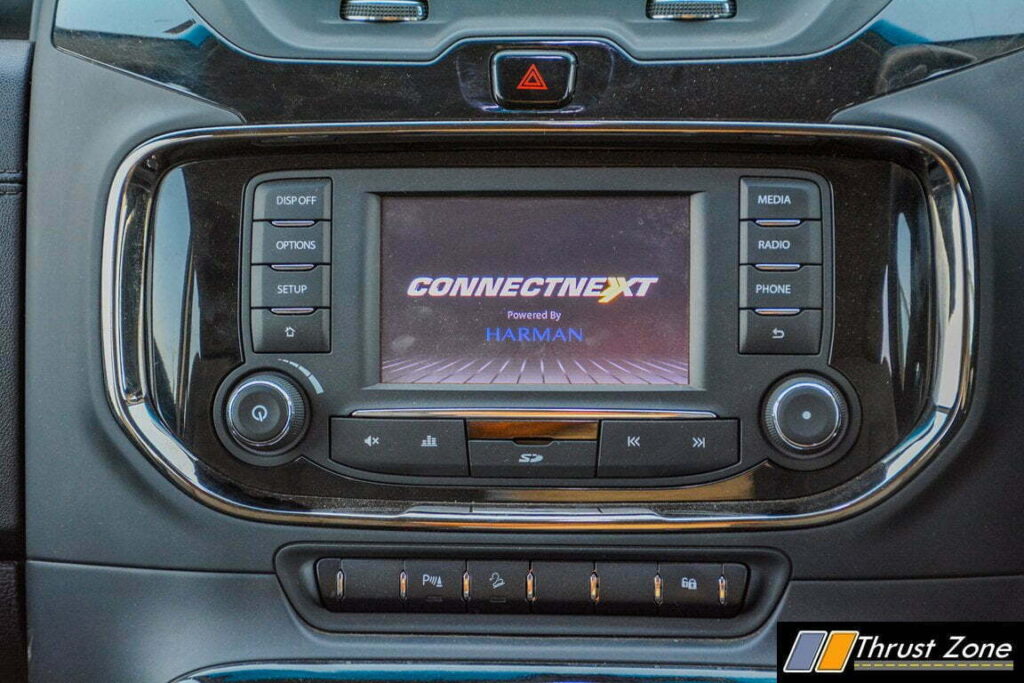 There is navigation on offer along with steering mounted control, fully electric ORVM, automatic climate control, mood lighting, leather seats, cruise control, voice controls, parking sensors front and rear and a fantastic sound system with 10 speakers that has JBL algorithms. Fit-finish is still not 10/10 but we would give it 8.5 out of 10 as major areas have nothing to be criticize about. Seats in all rows are great and the front seats are very supportive, we wished for a better tuned lower back support though. 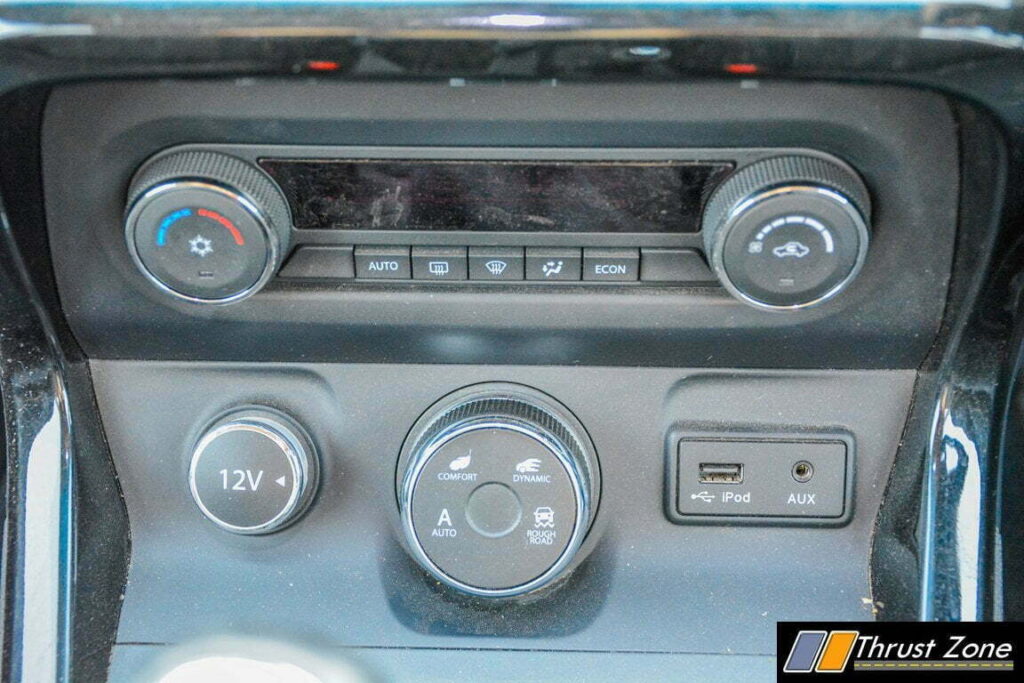 Like other Tata cars, the A/C chills your soul, forget the body which is already in Antarctica. Best part is every passenger in the car has its own vents which can be controlled. Tata does miss out on some features such as a sunroof, auto dimming IRVM (we expected ORVM to have the same too) which is manual in this SUV. Dead pedal is surprisingly missing as well in the manual variant. 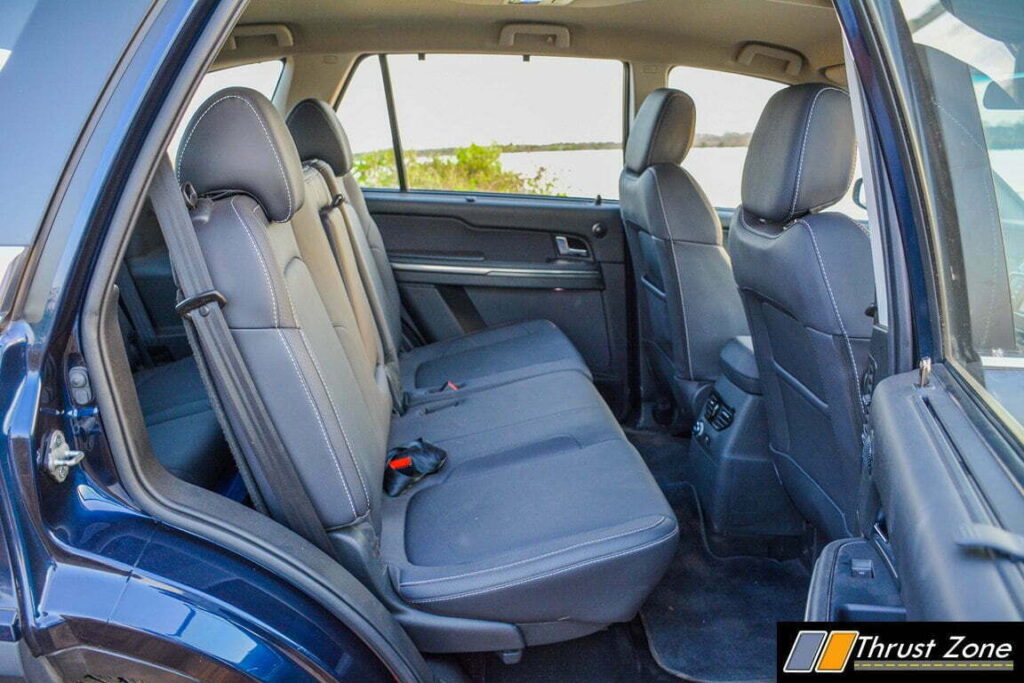 Let’s talk about space which is humongous in the Hexa. Tonnes of headroom, legroom and should room in all three rows, something that is rarity because the second row seats can be adjusted for legroom. Boot space with third row up is decent enough for local shopping trips. What is a little bit short in the Hexa are cubby holes to properly place your daily things such as a cup holder, wallet, mobile at the same time.

A center armrest has space and that is about it as the transmission areas take a lot of space. What is there in abundance once again are the charging points in ever row which is either is a USB port or a 12V socket. Overall, this is the place where Hexa has major strengths and should appeal to a wider audience than ever before. 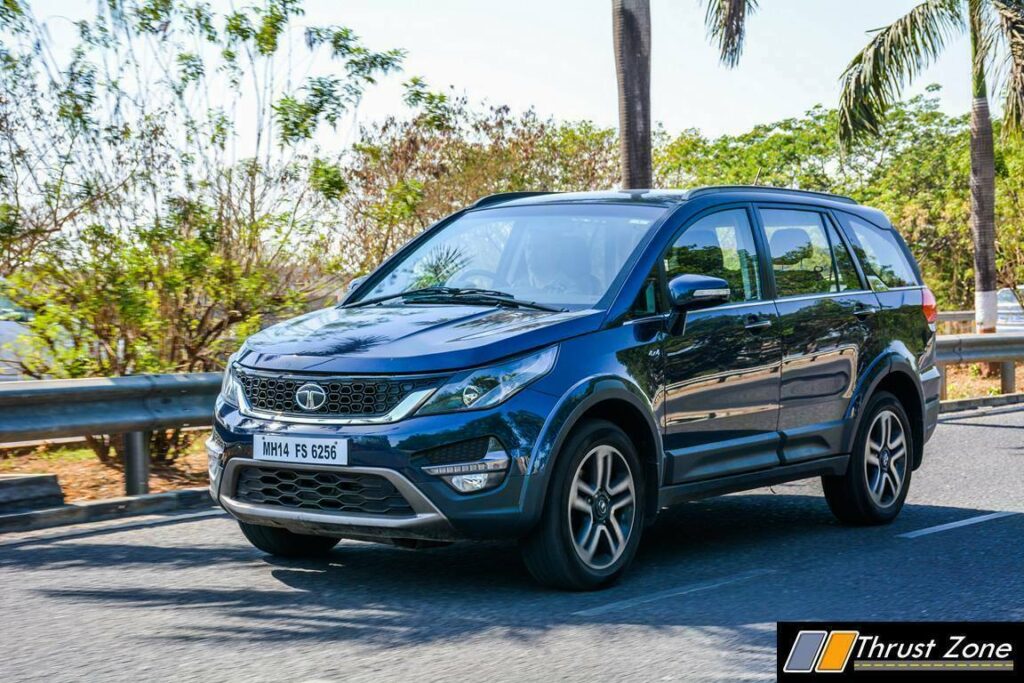 When it comes to the engine, the motor we had the 2.2 litre which made 150 PS of power and 400 Nm of torque that was mated to an 6-speed gearbox. The motor NVH levels have dropped considerably and the motor is also much more flexible than before. There is turbo lag below 2000 RPM, but thanks to the taller gearing, clever fueling there is thrust to pull it forward and post that, once the turbo spools in, there is a lot more punch awaiting you. Mid-range and top-end power is just about adequate and we saw a typical 180 km/hr top-speed that is seen in this category. 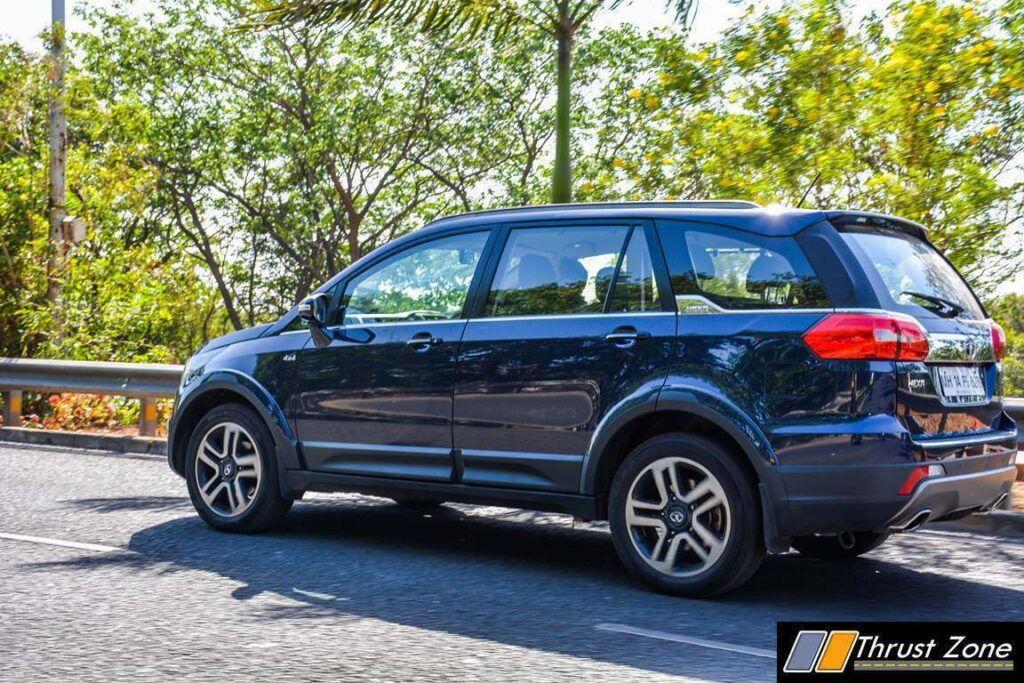 Cruising at 100-120 km/hr is easy and there is plenty of pulling power always. The engine is rev friendly, the clutch is light and has a bit of long throw. The gearbox is smooth enough than before, but does require a lot of effort when compared to its rivals and gives you the guilt that you don’t hit the gym often. If you always keep closing gaps urgently, all the time, then you will end up using a lot of the shifts. If you drive sedately, it isn’t required. We got an fuel-efficiency of 13.4 km/l in our testing, manufacturer claim isn’t far away which is 14.4 km/l. 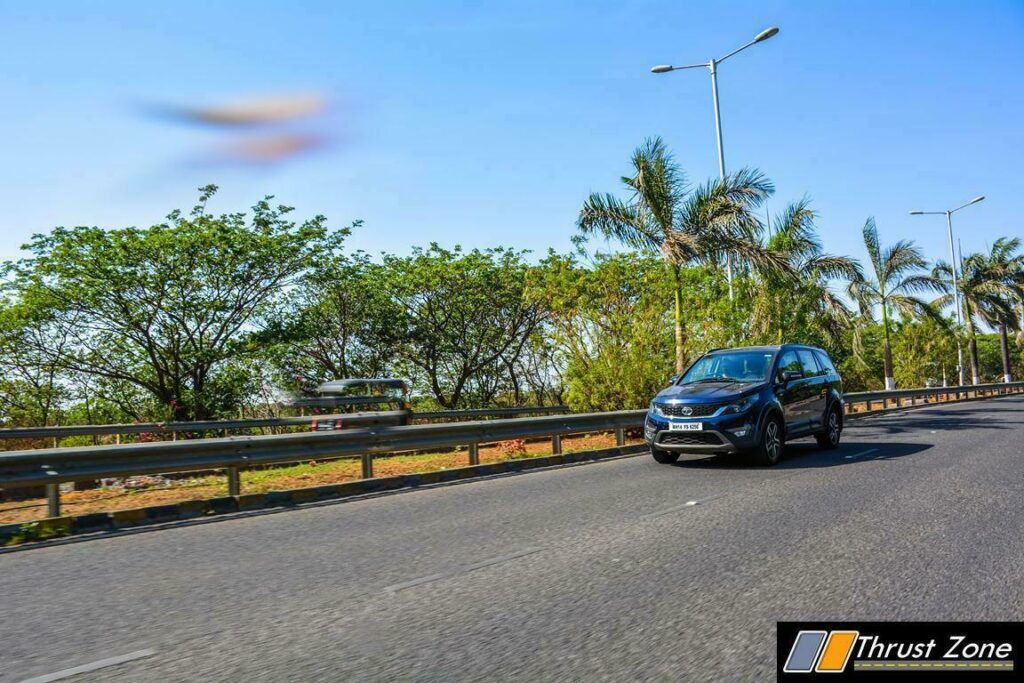 Dynamically, the Hexa has been talked about a lot. The chassis has been thoroughly revised and it is said to be stiffer, stronger and lighter to deliver a better composure. The suspension has been reworked to deliver a better ride and handling package than the already impressive Aria. All of this gets better with the 19-inch wheel setup that is offered on the top-end variant. The suspension has a taut feeling, the ride quality is stiff but complaint enough not to reach till your bones. 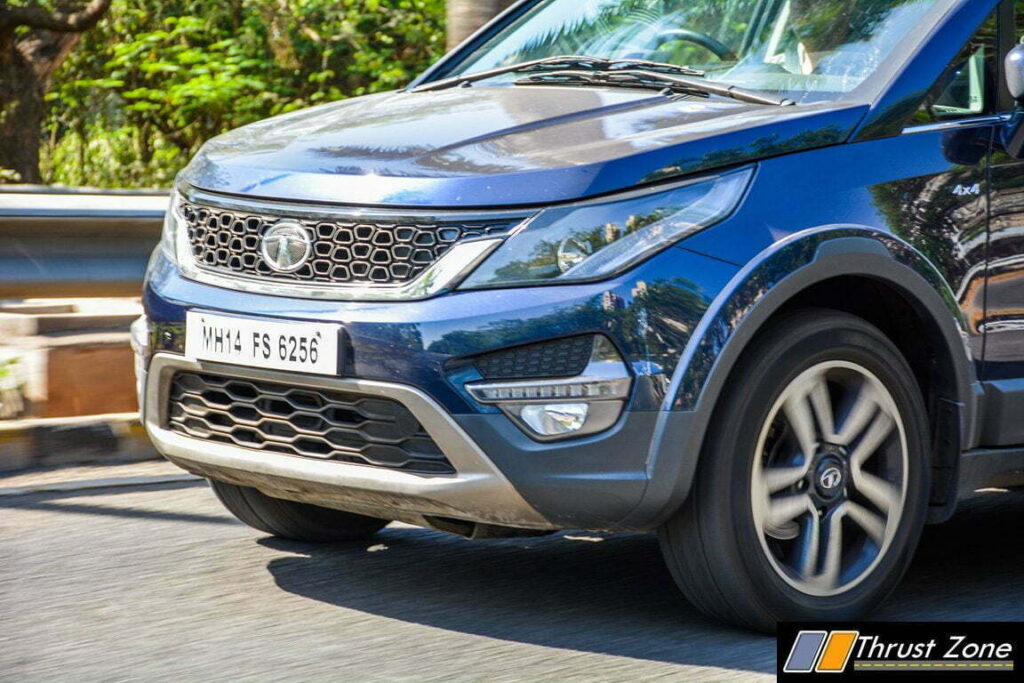 The highway speed stability is top notch as a result of this. Body roll is well controlled and the car can be pushed a bit more then before. Brakes are good with decent bite from the pedal and progressive power post that is in abundance. The steering feel isn’t great. There is no feedback and it can feel vague. However, that means it is light for city duties and it is precise enough to quickly react to your input but with no feel through the steering. 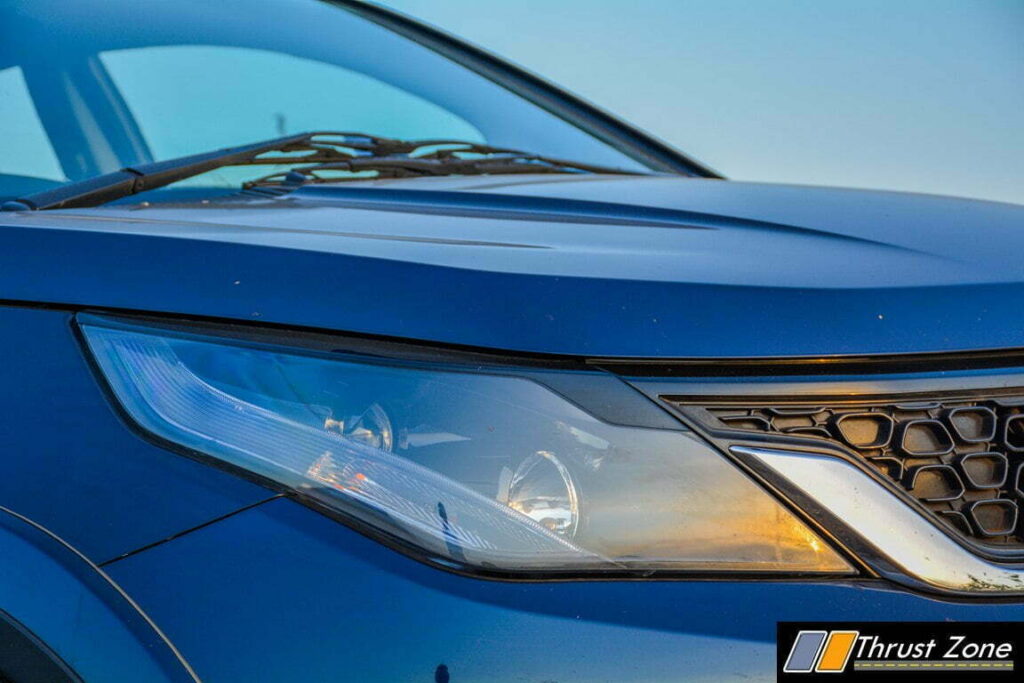 The Hexa is here to stay. It impressed us on every count that a ladder on frame chassis around the Rs. 20 lakh mark (on-road) is supposed to. The features listing is deep enough, the car comes with legendary off-roading capability, there is a lot of space, unique feature list despite slightly shorter than its competition. The Hexa design plays a vital role in cementing its stay in the segment. Hexa is flexible in every way you want it to be. The thoughtful touches, the mechanically strong package along with a great value for money price takes the deal one step closer to finalizing one and getting one back home if you are in the market for a SUV. 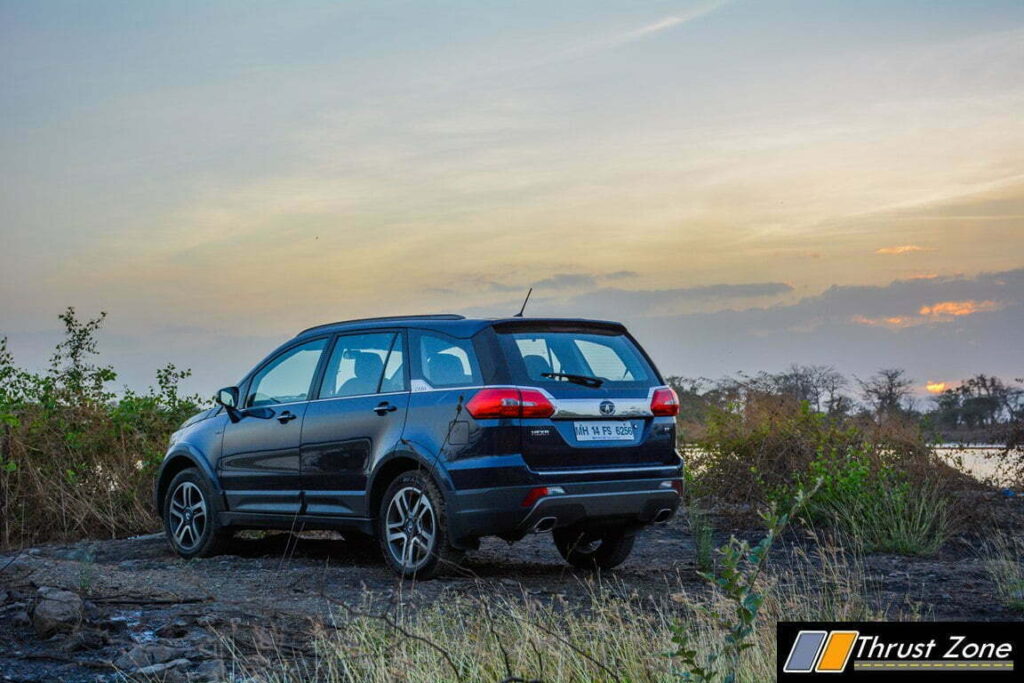