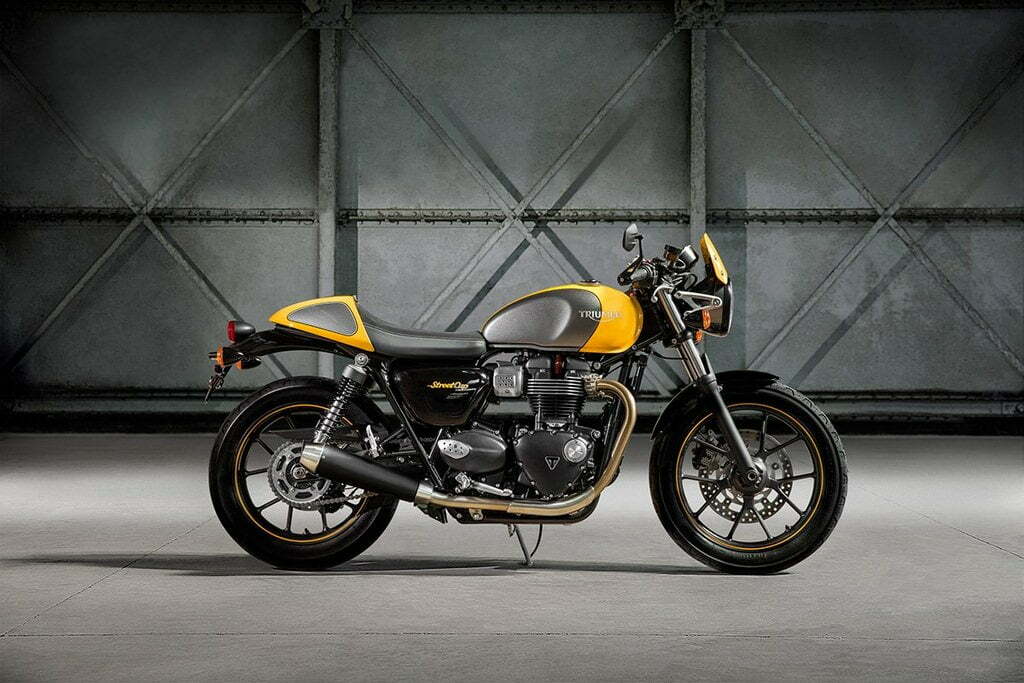 The biggest news for the ongoing INTERMOT 2016 at Cologne, Germany is in fact the looming Euro IV emission regulations. These have made every motorcycle maker to go back to the drawing board and find solution for it. This also means that we have been witnessing some really amazing products and upgrades this year. Triumph Motorcycles, not leaving behind has updated its product line as well. The iconic British motorcycle manufacturer just unveiled the 2017 Bonneville T100 and the Street Cup. Upgrades to the 2017 Bonneville T100 means that it now uses the ‘high torque’ 900cc from the Street Twin.

The power output stands at 54 BHP and 80 Nm and the engine is mated to a 5-speed transmission. Triumph has always been proud of its history and says the 2017 Bonneville T100 is inspired by the 60s Bonneville. On aesthetics front, the T100 is visually similar to the Bonneville T120. The flat-seat on the 2017 Bonneville T100 keeps its retro charm alive. The same effect is pronounced by the twin-pod instrument console and classic styling cues on the tank and the motorcycle.

However, the T100 gets a fair share of modern world tech as well. The bike gets Ride-by-Wire, ABS, switchable traction control, a torque-assisted clutch, LED tail lamp along with an USB charging socket. If that is not enough for you, you can also gets the optional heated-grips and cruise control. Being a Triumph the T100 will get a host of customization and accessory options, more than 150 the company says. Another variant called the Bonneville T100 ‘Black’ edition was on display. This gets either a jet black or a matte black colour scheme with blacked out engine covers, rims and the exhaust. The other new unveil from the British marquee was the 2017 Street Cup. One can think of it as a baby Thruxton and it looks lovely.

In philosophy, the Street Cup is the café racer version of the standard Street Twin. The café racer look has been achieved by using lower handlebars, slightly rear-set footpegs and a just a single seat. The engine has the same specifications and equipment as on the T100 with the exception of the exhaust. The new unit looks sporty with its up-swept look while a two-pot Nissin calliper floating disc is upfront.

Needless to say, the 2017 Triumph Street Cup will get a number of accessories for customization possibilities as well. In this case the number stands at 120 according to Triumph. On the positioning front, these two new offerings by Triumph will slot below the Bonneville T120 and the Thruxton R. Saying that, these two models will hold immense importance for Triumph’s modern classic range in a market like India. Expect the launch of these two motorcycles in around the end of this year or early next year in India.