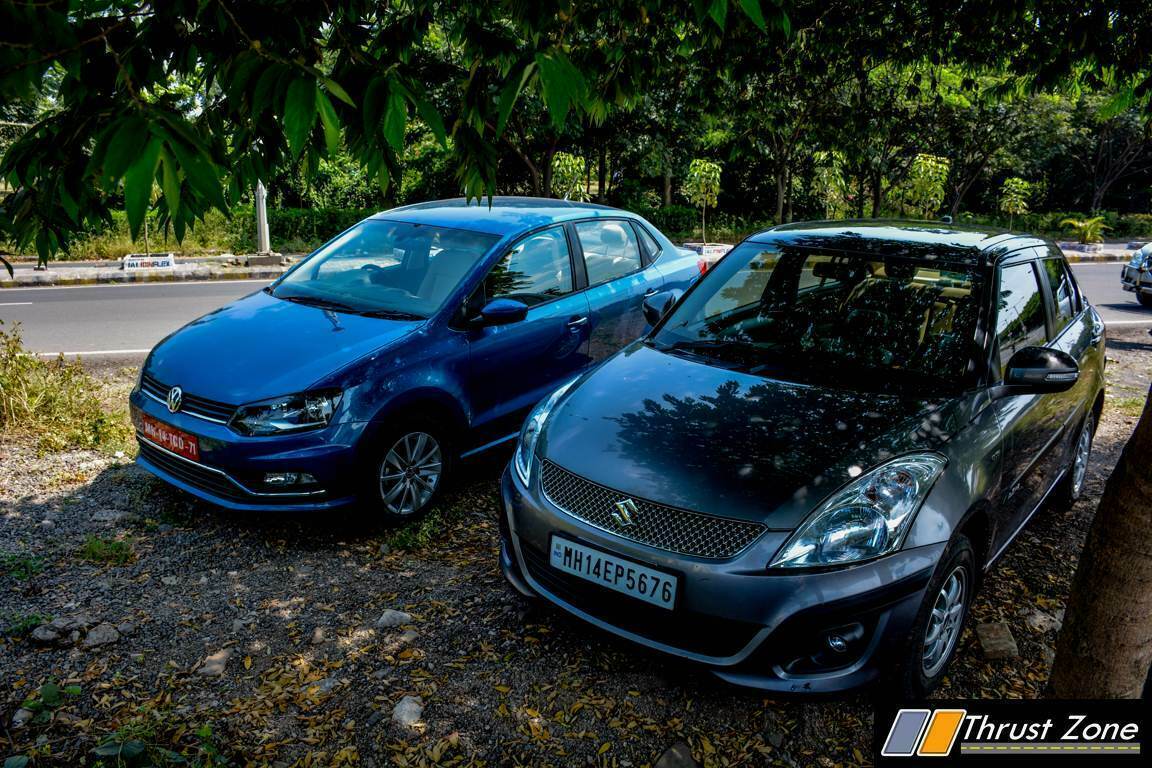 Swift Dzire is the most sold compact sedan in the market but is it the best too? We find out by pitting it against the new Ameo

Excuse the modification seen on the Maruti. As we all know that pre-facelift and facelift model hardly have any major changes

Clash of the Titans couldn’t be more different from it is right now. In the right corner you have the ruler of the European market, Volkswagen with the all new Ameo. In the left corner, is the savior of the Indian automotive industry, the dominating sedan despite endless criticism, the Maruti Suzuki Swift Dzire. Both don’t do well in the continent where each other rule. Volkswagen can’t seem to catch the Indian market, Suzuki doesn’t do well either in market such as America and Europe. Here, the case so much more different. However, Volkswagen continues to push with all its might in even after 8 years in the country to make a dent in the sales of its rivals. Maruti and Volkswagen have had a rough history together too. We put them on the streets and tell you whether this comparison is chalk and cheese or wine and cheese. 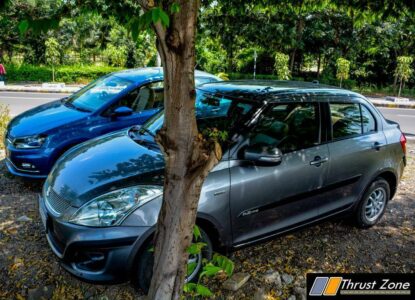 Part one where the Ameo begins to trump the Maruti starts with the design. Since day one, Maruti hasn’t done well as criticism is high because the design just doesn’t sync well when you consider the slightly sportier front with unmatched rear it has. Copy paste is the best way to describe this design. Facelift came and went and it hasn’t done its job, apparently, it did end up looking even more non-appealing then before too despite changes to headlight, tail-lamps and bumpers.

Side profile is where both score high to an extent but that’s about it. Even the rear at the Volkswagen isn’t anything that we all expected, but time and again it shows potential that it will grow, while the Maruti hasn’t. Volkswagen timeless styling at the front, with headlamps are louder than before (which is the case with the tail-lamps as well) does it job with the three slat grille and sporty-flowing bumper. 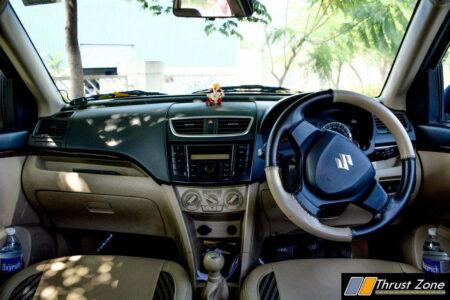 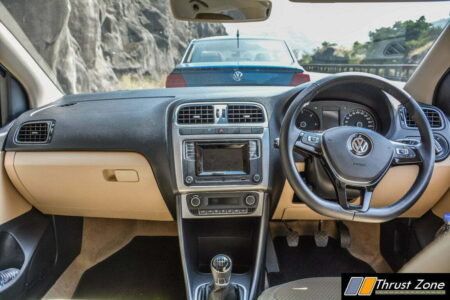 Interior is part two where the Ameo is set to score on the Maruti Dzire yet again. High quality can be seen in the Ameo despite the design has aged here as well because it has been taken from the recently refreshed Polo. Dzire’s interior on the other hand disguise its interior quality with the color beige. Cheap and scratchy plastics make up for the entire cabin. The dashboard looks massively dated now. Both cabins offer good sound system and come with four speakers. Maruti offers two tweeters on the higher spec variant. 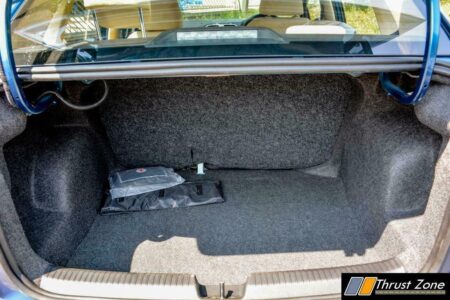 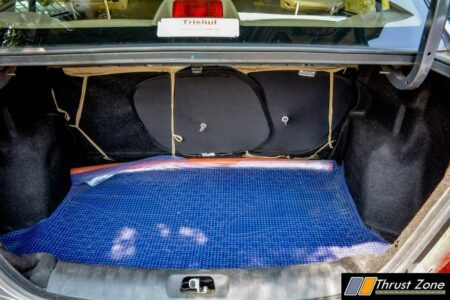 Volkswagen scores by offering static bending lights, automatic wipers, lights and cruise control. Maruti on other hand gets Keyless entry and start-stop button which the Ameo misses out on. Ameo again trumps that by offering one-touch up and down power windows on all four doors. Rest of the features are equal as both offer climate control, connectivity options and fully electric ORVM’s.

Ameo also comes with automatic chromatic IRVM, Apple Car Play, Android Auto and Mirror link which comes along with a touch screen unit. Ameo also gets an armrest, the flat bottom steering wheel comes from an Audi! All of this and even more features on the list not mentioned here makes the Ameo features list far more superior and higher and hence it trumps the Maruti. 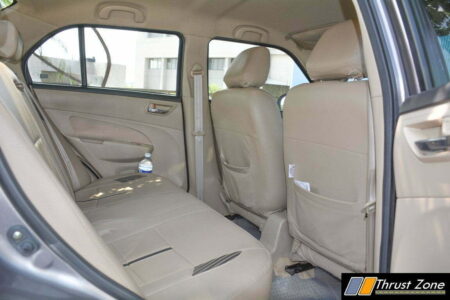 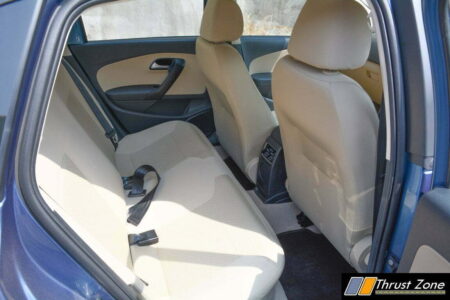 Space is where both these contenders don’t score that well. In the front it is all good as you have adjustable seats and enough legroom. At the back Ameo scores a bit higher than the Dzire in knee room, both are same when it comes to shoulder and headroom. However, both these cars are far behind than the competition when it comes to offering space in the back. In the boot space category, they offer under 350 litre of space in the boot.

When it comes to safety both cars get dual airbags and ABS as standard on all variants. Both hatchback version’s of these cars have scored in crash test, but not this particular units. However, they should score equally. The results suggest Swift gets 3 stars while the Polo got 4 stars. We can wait for full reports, but these reports can be satisfying enough for now.

Both cars offer petrol and diesel engines. Despite this is a diesel shootout, we would like to say the information we have on petrol engines that we have to make things easier for everyone. 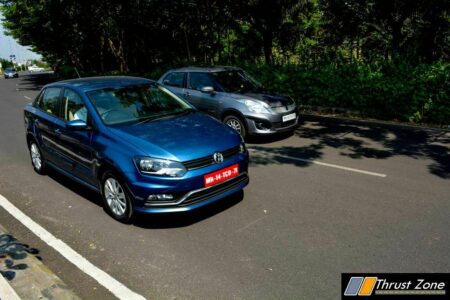 Let’s finish the chase here by saying that the Maruti has the better petrol engine on offer and the Ameo has the best diesel engine on offer. 1.2 Petrol K-Series is rev friendly sounds great and is efficient at the same time in real life. Forget the claimed ARAI numbers and you should fine. There is a good spread of torque from low to top-end so you are fine in any driving situation with the Dzire petrol. All those things don’t apply for the Ameo, it only fairs good as a city car when driven sedately and it behaves well at those times. Wring it up to the top-end and it screams and complains and it isn’t done in a satisfying way either. 75 PS 3-cylinder on the Ameo vs the Dzire 4-cylinder 85 PS, the latter is the pick of the lot.

Diesel is where the Ameo shines. 1.5 4-cylinder unit makes a hilarious 110 PS and 250 Nm when compared to the Dzire which just makes do with 75 PS and 190 Nm. Maruti purist’s would say that “you know we beat 90 PS car’s with clever gearing” Not this time folks, the difference is as big as the sales numbers of Swift and Passat. 1.3 Multijet with 75 PS and 190 Nm in comparison with both cars having good amount of turbo lag, post that the Dzire doesn’t stand a chance, Ameo pulls like a freight train with no coal in it. Dzire has a top speed of around 150 km/hr. Ameo does 200 km/hr with such poise and grace you hardly know you are doing that on the expressway of our nation. Both engines get noisy while acceleration and then both settle down on the highway when it comes to NVH. 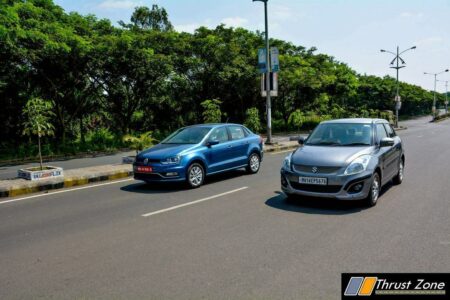 Maruti returns 16 km/l in overall conditions, the Ameo manages 15 km/l. Both cars can return more on the highway (around 20 km/l) when driven sedately. Both cars have diesel automatic and needless to say the VW with DSG gearbox is far more enthusiastic in its class and above by far. AMT does offer smooth shifts in the city (which is slow speeds) but can be a bit jerky and isn’t enthusiastic on the highway. Both gearboxes offer similar fuel-efficiency as their manual counterparts and hence both have their vantage points. Overall, equal points this time. 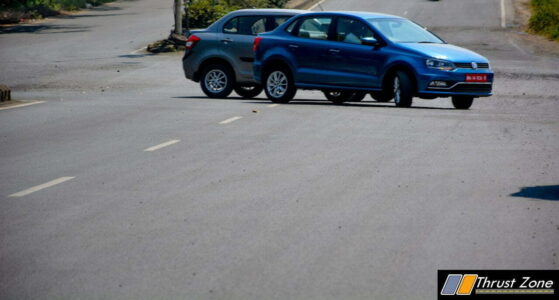 If you get a small Suzuki car in the test, it is pretty much set that which is the more fun to drive car here. However, there is VW too, so battle becomes intense. Both cars come with similar suspension and wheels package at the top-end of variant charts. Ride quality is good in both cars and they do just fine as family cars on our broken roads. Steering has enough feedback in both cars and they load up nicely and dead-center feedback is good too in both cars. Equally, the steering are nice and light in the city to do daily chores and commuting on both compact sedans. 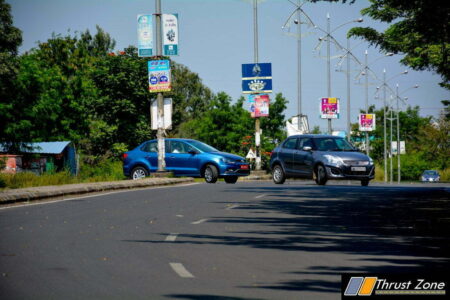 Do a run to the twisties and both cars corner well and turn-in quickly as they agile in the corners and nimble in the city. Ameo feels more taut through the corners though and ends up being the far more stable on expressway speeds as well. Dzire does a good job only with the top-end Zdi package as it gets bigger wheels and better brakes. However, the poise, stability and balance that the Ameo showcases feel superior. Brakes are still far more superior on the Ameo by a big margin. Ameo wins but not by a huge margin. 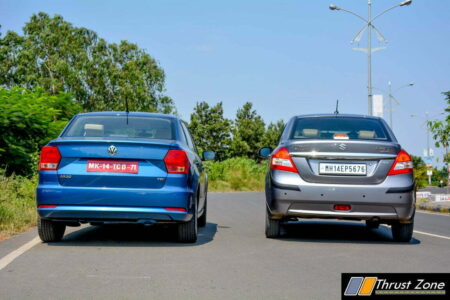 So is the comparison chalk and cheese or wine and cheese as questioned before? Well, the answer is none. Both cars have same weak points and superior points over each other at the same time. However, what gets them together is surprisingly the pricing. Ameo is just couple of thousand rupees higher variant by variant and that is a huge advantage that the Ameo has. Ameo offers more by a big margin so the value quotient is spot on.

Ameo diesel automatic pricing is higher by almost Rs. 65,000 when compared to the Dzire AMT but then again it is the best gearbox in the city and on the highway an offers manual gearbox level of efficiency too. Ameo could be the next household name if shown the right path. Hence, there is hardly any reason we should not declare the Ameo as the winner as it scores higher in every regard whether in smaller ratio or large over the Dzire. 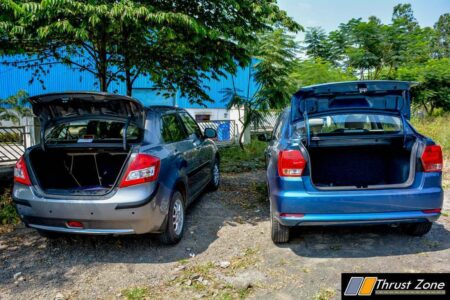 Read this too: Full road test of the Ameo Diesel

Gulf To Make Bajaj DTS-i Oil And Sell it, Strategic Partner for Lubricants

2017 MV Agusta Dragster 800 RC Is Craftsmanship Taken To The Next Level On Two Wheels!