Yet Another Bajaj V15 Advert Set To Give You Goosebumps, Introduces New Color

Yet Another Bajaj V15 Advert Set To Give You Goosebumps, Introduces New Blue Color with white stripes makes it more substantial looking

Bajaj Auto has just launched a new brand film for Bajaj V15. The film conceptualized by Leo Burnett talks about how national pride is restricted only to occasions and a few days of national significance. Something which is forgotten the next day. The Bajaj V15 Advert aims to inspire people not to forget the history and feel the pride every day.

Bajaj V was launched on Republic Day earlier this year. Since then, it has created quite a stir in the market. The sub-brand under Bajaj has taken the market by storm. The V15 sold 11,000 units on day one of its sales and making it to the Top 10 list in terms of sales in just a month. Today, the numbers have clearly sky rocketed. The Bajaj V has sold over 2,00,000 units already. The monthly sales of 30,000 units a month are said to be increasing. 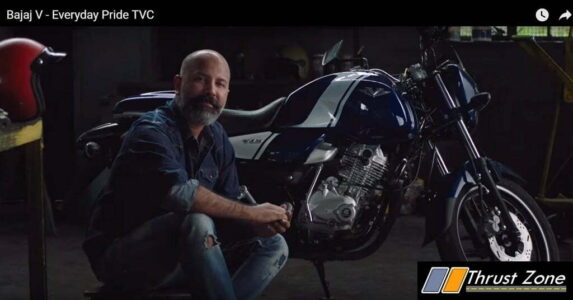 Bajaj says that they are not just selling motorcycles, but celebrating the pride of the nation.The Bajaj V15 Advert has been directed by Prakash Varma of Nirvana Films. The film has been shot from the perspective of of Maha Vir Chakra awardee Rear Admiral S.K. Gupta who served aboard the INS Vikrant during the 1971 Indo-Pak war. 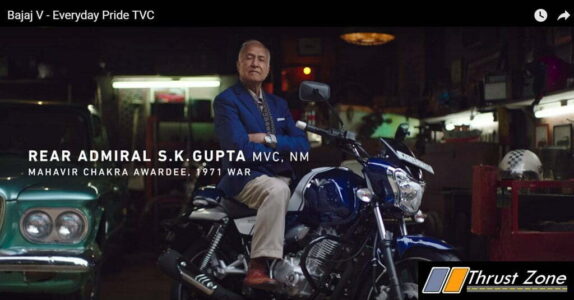 Bajaj V15 Advert also showcases the new blue color that has been introduced sneakily. There isn’t any official news on it but we expect that come soon. Blue color looks swell indeed with the white pin stripes. The idea of the styling and graphics continues to be similar to premium cruiser that is sold abroad. The V15 continues to be sales chart leader and strengths itself in the 150cc category, a segment where Bajaj always had a leadership. The V15 continues with the refreshed 150cc engine that makes 12 PS and 13 Nm of torque and is set to deliver superb driveability and fuel-efficiency.

Mahindra Mojo PayTM – Use The Internet To Book Your Mojo Online