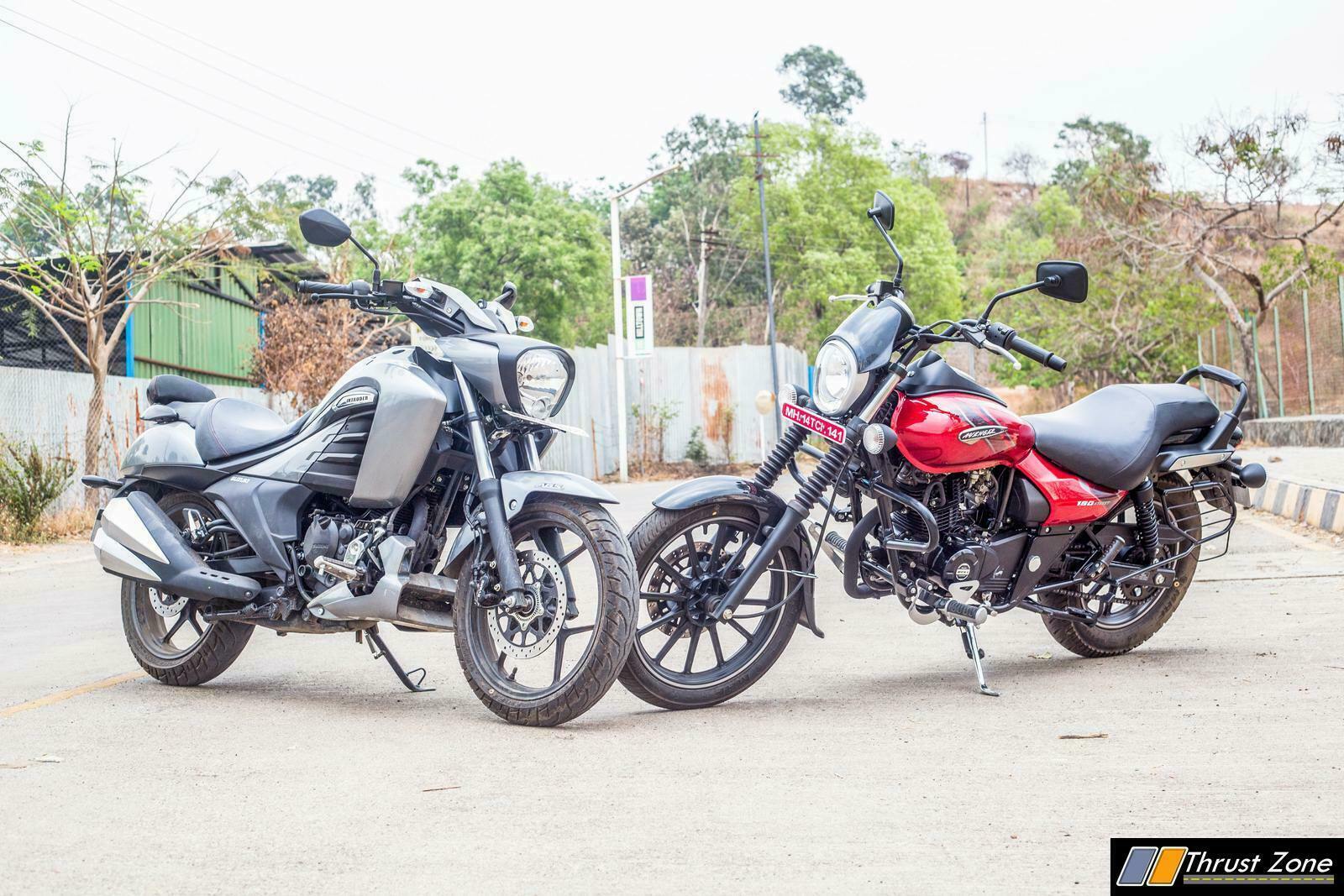 We are back yet again a shootout between the Intruder 150 and Bajaj’s latest response to the threat via the new Avenger Street 180 which replaces the Street 150. We compared the 150cc rivals back then they were available and today we have done the same. Last time there were some similarities and this time too there are.

However, there are a lot of changes from Bajaj’s end. Bajaj has taken the good and bad, old and new bits from the Avenger 150 and 220, mixed them up in a bowl and served them with the Avenger Street 180. What are those changes? How does it stack up against the Intruder 150? Do the numbers on paper make the Avenger Street 180 superior? So many questions, let’s start giving you answers. 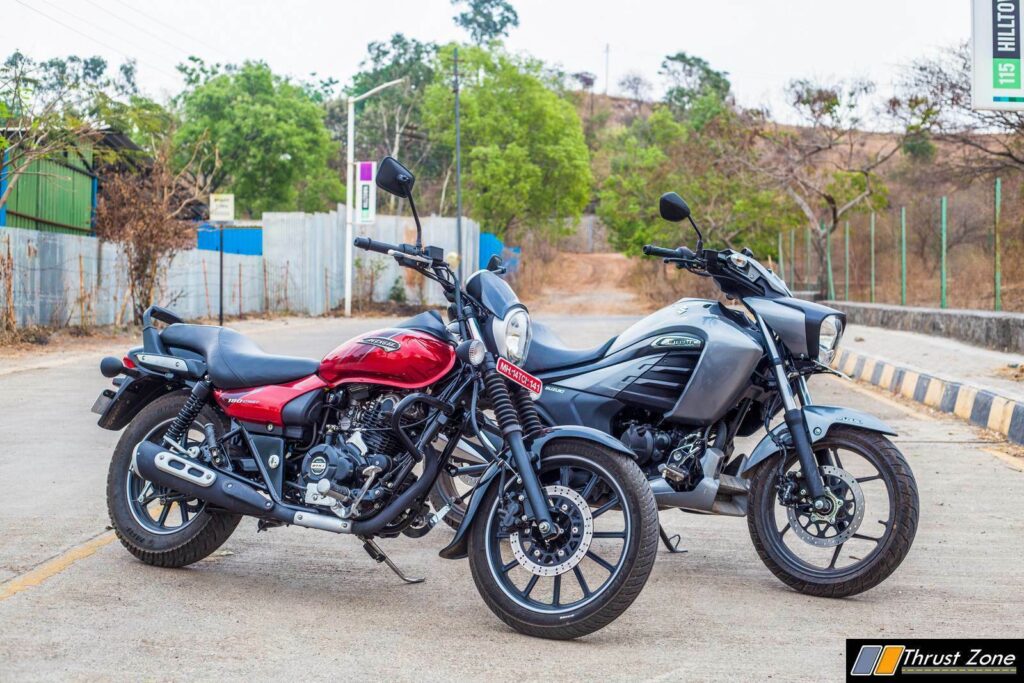 Design wise, the Avenger is getting old and how. While the mass market appreciates, in India, at least, whatever runs forever. That fetches good resale value and they enjoy the brand which is now a cult. Hmm, where did Bajaj get this idea from? Styling changes are here and they are taken from the 2015 updated version of the Avenger series. Exhaust canister end has been smoothened out. There are new colors on offer and there are new graphics that are used on the side panel and the fuel tank.

New headlight, visor, gators on forks and overall stance makes it look traditional and classic cruiser with modern elements. While the Intruder has a legacy-oriented design which can be seen in the headlamp, something which is also a hit or a miss. The side panel is huge and the tank is almost hidden in it. The rear cowl is large and it has a sleekly inserted LED tail lamps on offer. 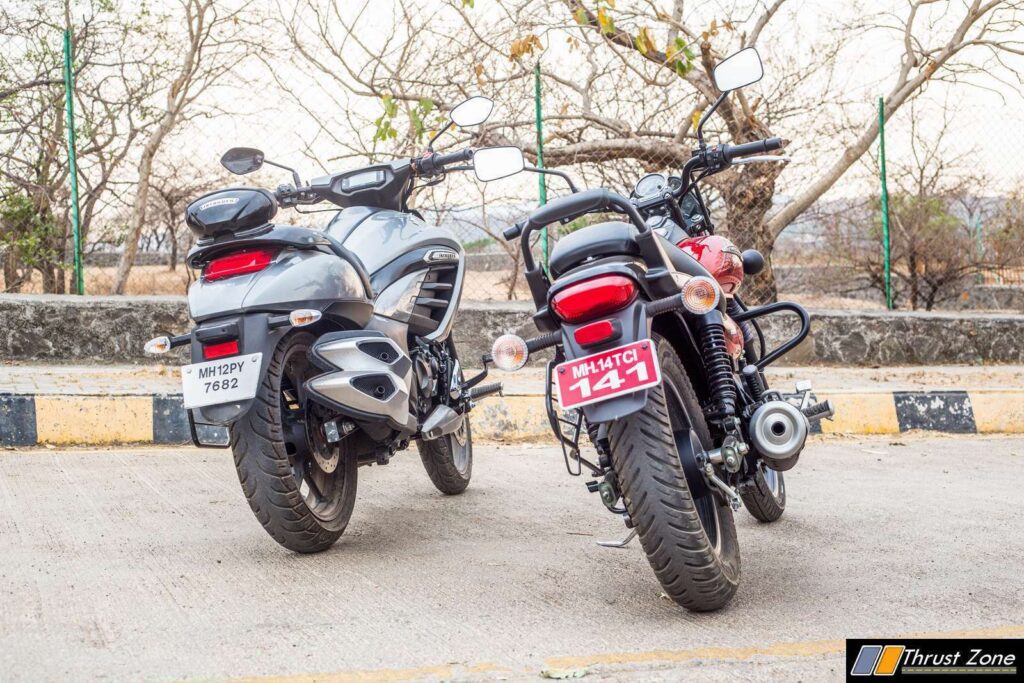 Exhaust is sci-fi stuff and is twin port unit which grabs attention from kilometers away. Alloy wheels on the Intruder are taken from the Gixxer, while the Avenger 180 has very sportster looking alloy wheel with a multi-spoke design. Overall, Intruder claims its modern, Bajaj is proud of its classic design. You need to decide which one do you like as it is a clearly subjective issue. 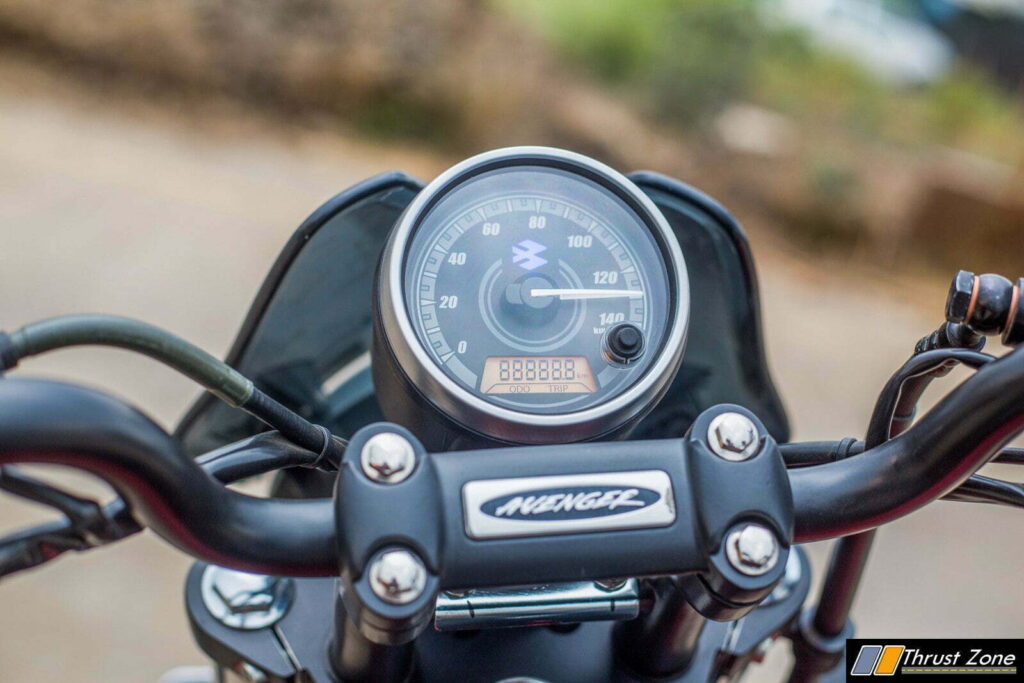 Switches and Cluster are far more superior on the Intruder 150. The cluster has all the information you would need and switches are really impressive in terms of quality. The Avenger uses two-decade-old switchgear from the Discover series and instrument cluster has trip and odometer in digital and analog speedometer which lacks a tachometer.
There is a premium looking soft grab handle at the back and large seats to make sure pillion is comfortable on the Avenger Street 180. The Intruder also has a small backrest on offer but no grab rails just like the Avenger. 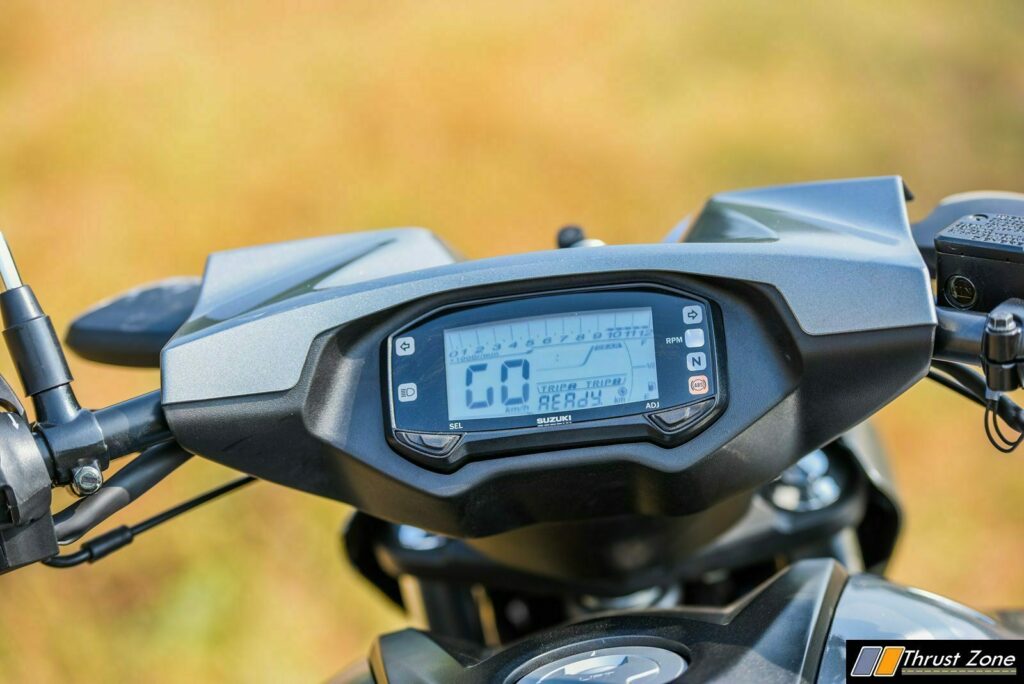 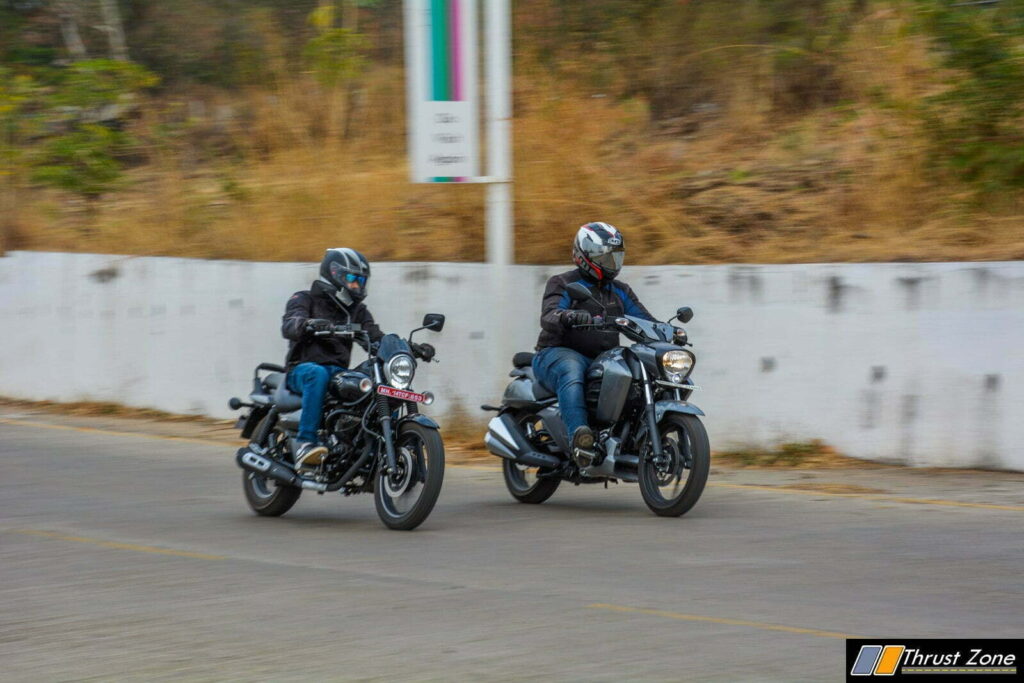 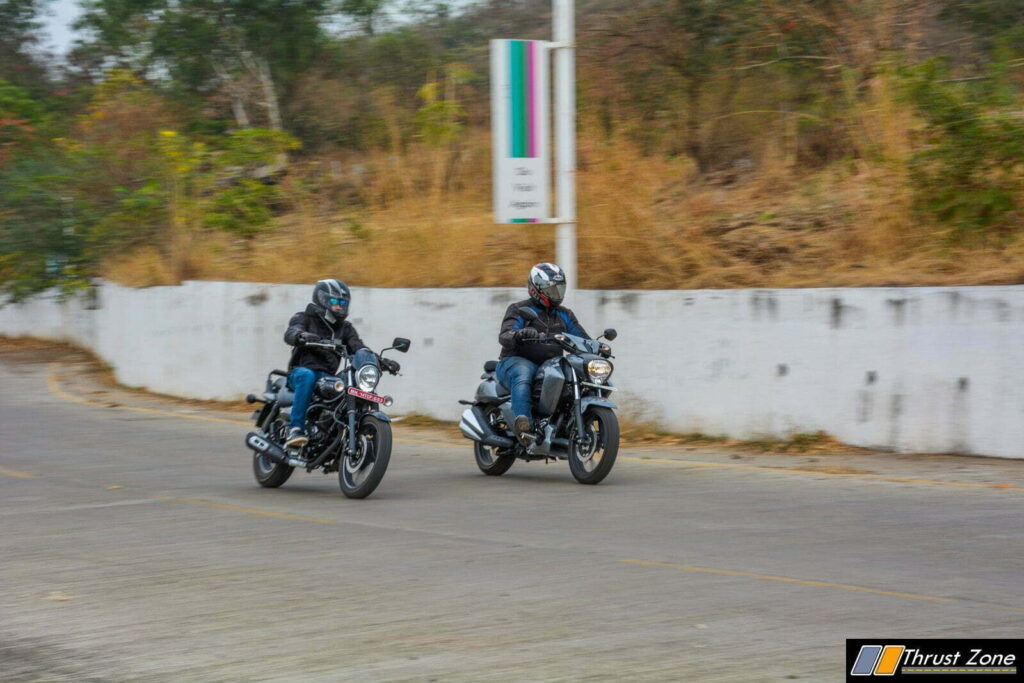 Intruder 150 has a nice balance of gearing and the rev range is nor big or small. The gearing and the torque wave have been tuned perfectly and the Intruder feels slightly peppier. This is due to a shorter throttle action over the Avenger 180 and lumpy carburetor engine on offer with a throaty exhaust and intake. Meanwhile, the Avenger 180 has a throaty exhaust note only, which is an improvement by a big margin when considered to the previous version.

Dynamically, the Intruder 150 with a shorter wheelbase and gripper tires and a great chassis feels like a relaxed motorcycle to ride. It is agile in corners and nimble in the city but does feel a bit hairy on the highway when compared to the Avenger 180. Avenger 180 Street remains composed and relaxed by a good margin over the Intruder 150. 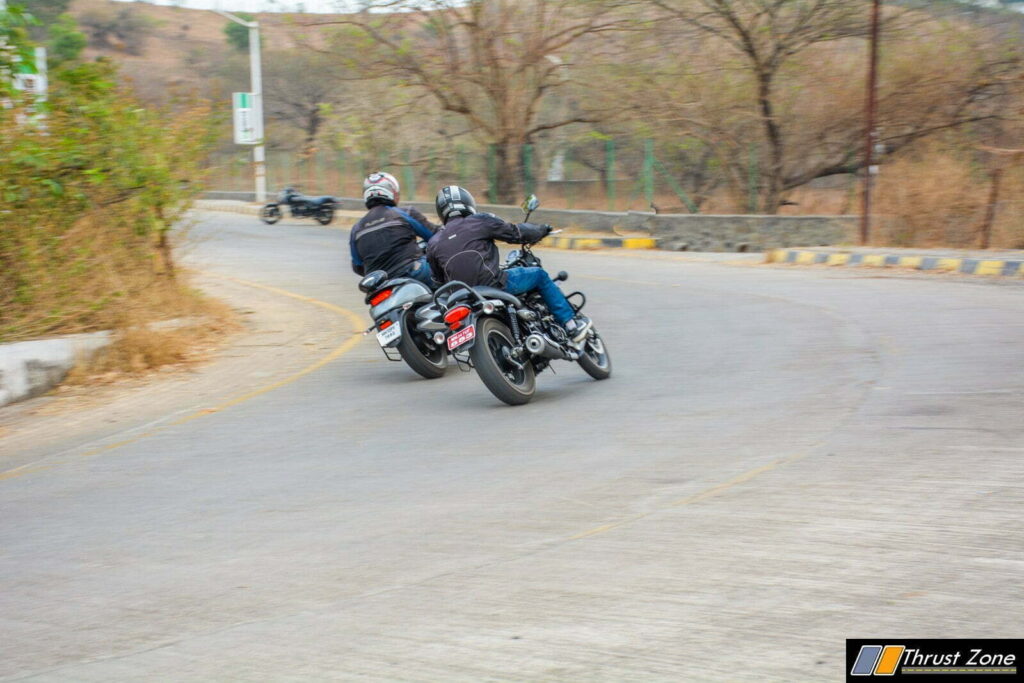 Avenger also has a typical Bajaj chassis so that means it is very nimble in the city and quick to turn into corners. Avenger 180 has a better balance with its well sorted suspension and offers best in class ground clearance. It doesn’t feel the most sportier of the lot which the Intruder feels like, but it being very close to a motorcycle, which makes one feel like its better to own the motorcycle itself as the Avenger 180 Street is laidback and still provides good fun in the corners. 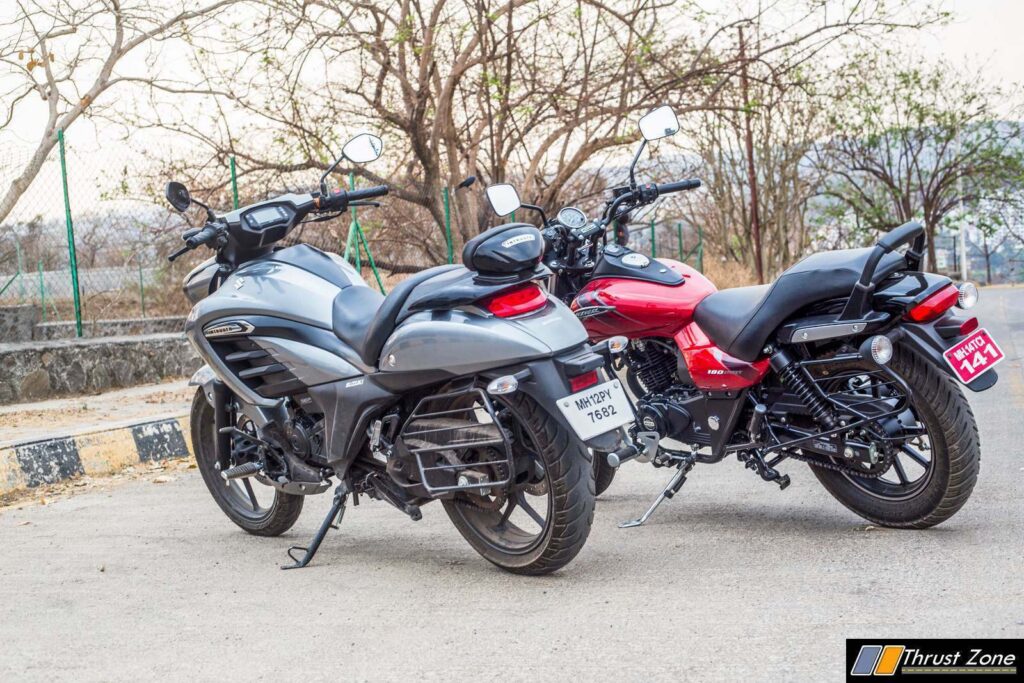 Bajaj on paper is offering even more value to begin with. Prices have gone higher, but the 180cc engine with more power and torque makes it stand out. How big is the difference? A full-fat Rs 15,000 over the carburetor version of the Suzuki Intruder 150. Fuel injection version is also launched and that cost 21,000 more over the Avenger Street 180.

That huge some of the money gets you a feature loaded cluster, ABS, Fuel injected motorcycle ready for the future. If you want, you can go ahead with it if you also like the design. However, Avenger offers a similar experience at a far lesser price tag that also comes with a well-loved brand, a universal styling approach and a bit more performance too. All of this makes the Avenger 180 win the test this time around.