Hero, just like their erstwhile partner Honda hasn’t had a huge success in the performance department. Time and again with every model, the rival from Pune has taken their share by a huge margin and now it has 50% of the market share. Yes, we are talking about Bajaj who has dominated this segment from 200 to now, 400. Hero isn’t giving up. With the launch of TVS Apache RTR 200 and the endless popularity of the Pulsar 220, Hero wants a share of it too.

Now pitching directly could help them again them sales and popularity in the segment. Hero Extreme is already a popular name in the sports segment for Hero, using that name and 200 cc capacity engine under the tank can help them? We have some details to tell you what the Hero Xtreme 200R is like as it has been launched at Rs 89,000. These are numbers now that apply for Pan India.

Read this too: 2016 HeroXtreme 200R Video and Text Review

The design and dimensions seem quite familiar that has been seen on the 150cc counterpart. However, there is a change and it is evolutionary and not revolutionary. The side panels are big and flow downwards, the tank is much sportier and chunkier in looks. Headlight cowl has been stripped of the existing motorcycle to give this bike a more naked appeal. Fatter rubber, a long exhaust and new design for alloy wheels are on offer.

Launched in July phase wise and officially in August, prices start at Rs 89,000 which is quite good for a that it offers and targets the 160’s from Bajaj/TVS and Honda. 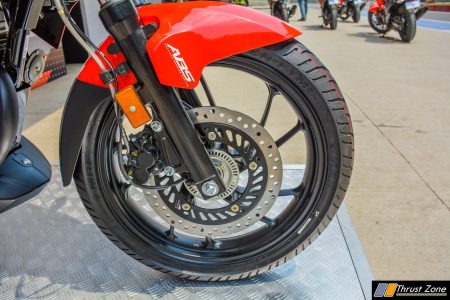 What we can see in the pictures is similar equipment as before. However, everything has been tweaked. Concept bike had a sports bike inspired rear swingarm and subframe but, normal, production version has something more practical and usual stuff that we have seen before. Fatter front forks, tyres, bigger disc brakes and much more can be seen in the bike.

Read this too: 2016 HeroXtreme 200R Video and Text Review

Single channel ABS is being offered as standard. Features list include Dual disc brakes, LED lamps at the rear and a cluster with digital speedometer and analogue tachometer.

Read this too: HERO SPLENDOR plus launched with BSIV engine/a>

Read this too: HERO PASSION PRO launched with BSIV engine/a>