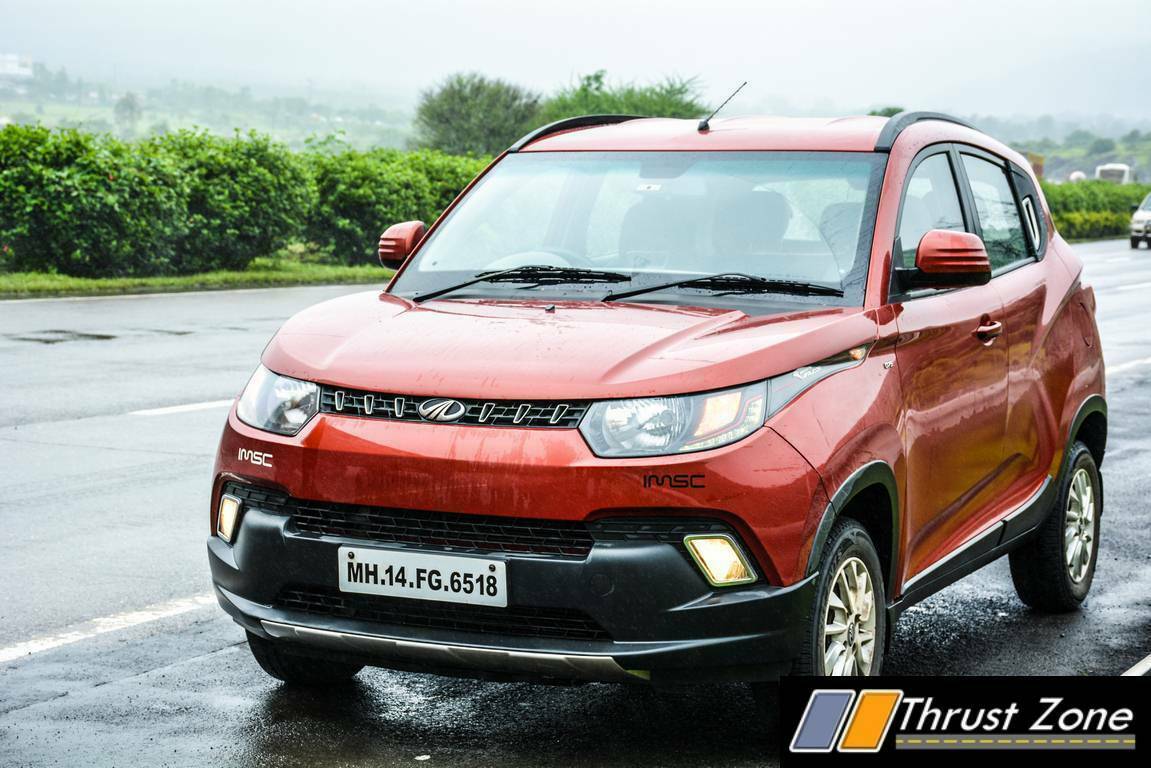 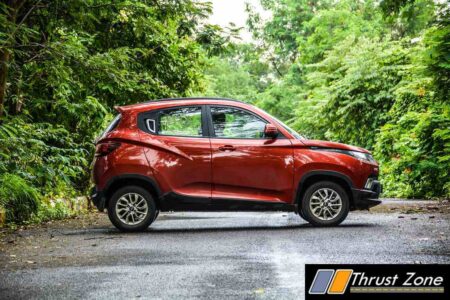 If there has to be an ambitious car in the Mahindra stable after the Scorpio and XUV 500 it has to be the new KUV 100. Launched in the year 2016, it is the smallest SUV in the stable and will be the same from now. The KUV 100 is the second monocoque chassis that the brand developed in their stable after the much successful XUV 500. KUV 100 was the most anticipated SUV of all time from the brand. KUV 100 has a lot of expectations from consumers and critics. We know how good the XUV 500 is thanks to its one major point which was the uni-body chassis. How good is the KUV 100? After riding it on the Mahindra’s test track at launch, today we have a comprehensive road test like no other as we spend quality time with the car and hand out exact numbers and a detailed review for you.

Design Styling has to be one of the major factors for the KUV 100. Reason? The SUV grabs attention on the road despite being the youngest. The KUV 100 is flashy in all color options that it is available in. The front is outright modern and is very youth oriented in its design as the headlight resemble the ‘latest’ sunglasses, which has cool looking LED lights as well. The design of the headlamp gives great illumination and spread as well. The front grille is minimalist and has 6 ‘Jeep’ inspired slats on the mesh grille. The large bumper which is split and has a skid plate and protruding fog lamps. 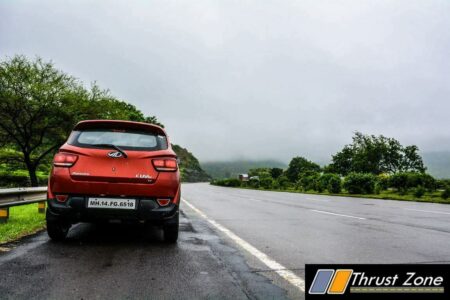 Decent amount of ground clearance, cladding on all four sides large wheel arches make sure it as an SUV for the road and not beaten tarmac. The claw design mirrors is also a different approach towards ORVM’s. Rear again is one of the best angles to look at the car as it gets the ‘Audi Q7 esque’ design and pattern of the tail lamps. The door handle is mounted at the top giving it a coupé look which we first told you when it was spied. The idea was first seen on the Chevrolet Beat! The split bumper yet again adds to the SUV look. Overall, apart from the side profile which is slightly ‘not-so’ proportionate, Mahindra has done a great job of how you can squeeze a vehicle in the 3800 meter mark. 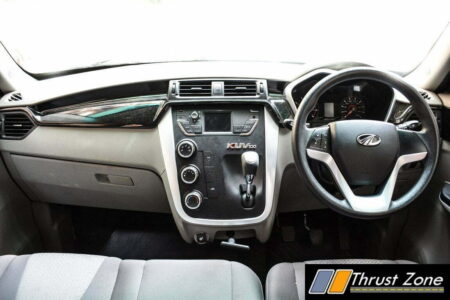 Interior Cabin is another place where the KUV 100 shines. Good use of texture on the top of the dashboard with the right color used adds brightness to the cabin. The second has a piano black running from one end to the other looks good but it is borderline tacky. Overall plastics used on the center console below the screen which houses buttons and knobs could be better. Sound quality from the speakers is down right brilliant at this price point this is best sound system you can get as a stock unit on the top-end variant. Bluetooth works well and is fast enough to connect at first time too. 12V volt socket is provided at the front.

The large center console has a very tiny screen which shows information about audio connectivity options. The screen also shows fuel information, which stopped working after a week of testing. The fuel info is clearly a forgotten task as on a 35 litre tank, it shows a range 950 kms. Clearly not possible in any way, we think the software has been taken from the bigger vehicles and then not tuned for this specific fuel tank. The speedometer housing is curved and houses two dials which show two trip meters, odometer and fuel gauge with a good old temperature gauge along with a host of warning lights. 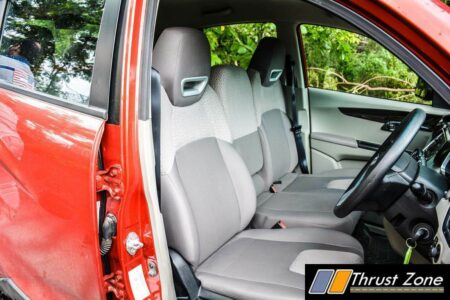 Seats are comfortable, but a lack a bit of under thigh support at the front. Integrated headrest does a fine job of keeping things comfortable and back support could be better for long distance journeys. However, what aids in the comfort of our 6-seater car is the huge armrest for passenger and driver who can rest their arms.

Tilt the steering into the lowest possible range and rest the right hand on the armrest on the door panel and continuing cruising. A/C is a chiller in the hottest weathers and cools all five occupants in very less time. Handbrake design comes from the 80’s but there wasn’t any option for Mahindra with this kind of dashboard and gear shifter layout left to apply. Electronic handbrake? Not on a budget car for sure!

Space in the front of the 6-seater is good and it can seat 3 adults, however, it isn’t safe as it doesn’t have a seat belt and no airbags are provided in the event of a forward collision is given either. Space in the back is adequate with limited legroom, but good amount of shoulder and head room by segment standards. Boot space is low as well and can be used four 2-3 medium size bags and nothing more. 6- seater disadvantage is the lack of cubby holes in the car to keep your daily items. 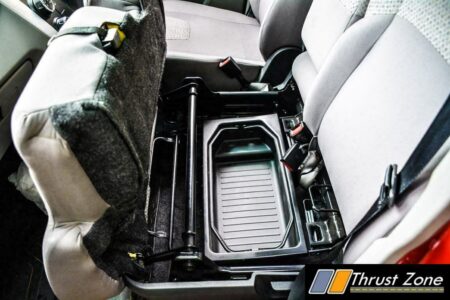 There is a small coin box in the front, which is below the power/eco mode. Also, there is storage under the front passenger seat and below the carpet at the back, but cannot be used for things such as wallets, mobiles and other daily items. Once the armrest is down you can use the small area to keep things.

Electric ORVM’s, power and eco mode, puddle lamps, door handle lamps which can be controlled via a switch on the roof works. Blue Sense App provides a lot of information via App. Both ‘light options’ add to the cool quotient and the features list. Start-stop button is marked as ESS, but it doesn’t work flawlessly. Turning back the engine on is via the depressing the clutch results in shaky start-stop than normal and can stall vehicle twice. Best is to keep it switched off or restart the ignition completely. 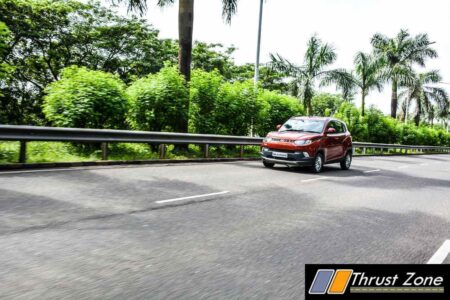 Engine and Gearbox
Powering our test car was the diesel engine that Mahindra has made from the scratch. The 1.2 turbocharged diesel motor makes 75 PS of power and 190 Nm of torque. Mahindra claims it is the lightest in the segment and is efficient and meets upcoming and current emission numbers well. The engine NVH levels are good-by small car standards. The engine is smooth and rev friendly and revs till 4000 RPM. Eco mode limits the RPM till 3500 RPM post that you have to push power mode button to go higher.

There isn’t much of low-end torque thanks to turbo lag. However, since the gearing is on the lower side there is always power on demand at any given speed. Mid range is good and top-end power is quite good as well. The clutch is light, travel is slightly long, gearbox is the smoothest in the business. However, it can get a noisy if you shift enthusiastically or even normally. 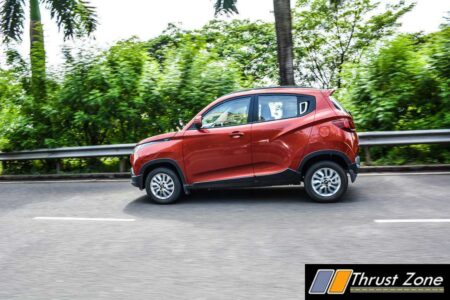 Some reports complaining that it doesn’t go above 110 km/hr isn’t right as the SUV will be in Eco mode. Switch to power mode, you can reach 150 km/hr where there is speed limiter beep sound can be heard. Shorter gearing also allows for load carrying capability as the SUV is on high on kerb weight and low on power which cleverly mask’s the situation. We got an average fuel efficiency of 14.6 km/l and highway mileage went upto 18 km/l only. Less for a diesel, but the SUV meant for the city, it is still a commendable number.

The pull from 80 to 110 km/hr is done well, which makes it a good pulling machine, but the motor is extremely stressed at that time and drone ‘sound’ enters the cabin. Once you reach top-speed the engine makes a pleasant noise to a certain extent. However, all the engine noises are masked by excessive wind noise that enters the cabin through the A-Pillar. 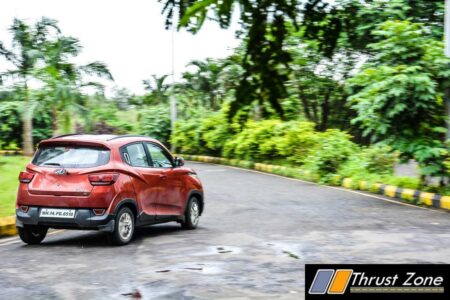 Dynamics
The only downside to the entire package are the dynamics. Mahindra clearly forgot to tune the steering as the lock to lock ratio is relentless. The steering weighs up when it wants to, no feedback from it either and at dead center it is extremely vague. Brake pedal play is a lot higher than expected. However, braking power is good enough and sheds speeds easily at all speeds.

The best part is the ride quality for the KUV 100. It glides over all types of bumps and potholes and even off-road like road conditions that Mumbai city has. The core traits of an SUV exists with this Mahindra, but it could have been better and more like XUV 500. Turn-in into a corner and there is a lot of body roll from the start itself. 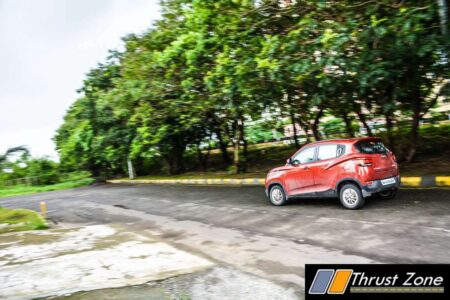 However, it is controlled, but we don’t suggest you got to twisty road and drive it aggressively, atleast not without upgrading the tyres to bigger dimension one’s. Overall, we wish Mahindra uses the monocoque advantage and tunes the chassis better, especially the steering, which is light but can be a pain while parking in tricky situations. 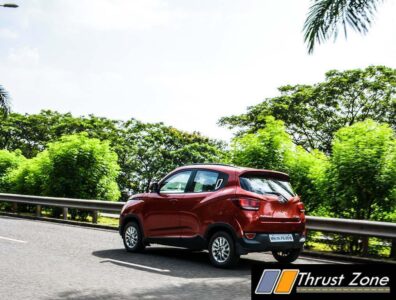 After spending quality time with the KUV 100, we can tell you one thing for sure. The KUV may not be a fun to drive vehicle, but it is an outright commuter like no other we tested. It took bad roads like no other small car in the segment, it had the best engine to live with despite fuel efficiency is slightly lower than the competition. Mahindra has made great engines, we have no idea why there are not going through the roof and shouting that they have done the same.

Read this too: Variant by variant and complete price list here

Only if the KUV was lighter and more dynamic, there was no stopping this vehicle. For now, what it has on its side is a great price tag, a lot of bespoke features, unique cabin layout and a lot practicality on board which makes it a ‘Kool’ option in the market that deserves a chance.