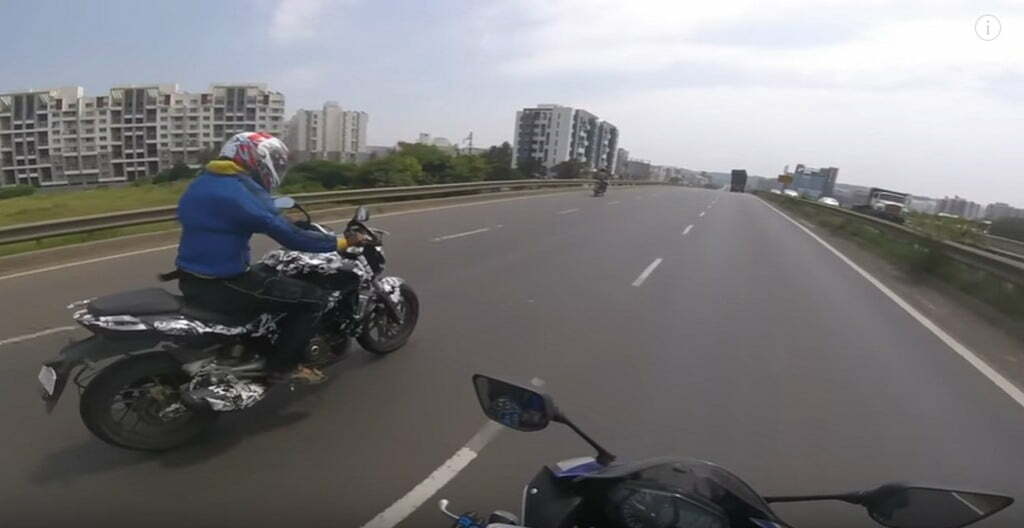 Bajaj Kratos VS400 Gets Chased By YZF-R3 on Pune-Bangalore Highway. Last time we saw this when an R15 for Duke 200 were doing the same.

Go Pro’s. They are changing the way things are happening in the automotive world. Spyshots and Spy videos of bikes testing is now a regular affair. Last time we saw a Duke 200 trying to chase and Kratos VS400 and it just couldn’t catch up with the Kratos for reasons called as ‘logic’. The same scenario took place when an R15 tried to do so and the same law of physics applied. This time, the fight is intense, more Bollywood than the last time. The R3 tries to catch hold of the bike just to make sure he gets to look at the front-end. Test rider already acknowledges the presence of the bike and the chase continues for some time.

Video shows that the R3 guy finally gets what he wants and this entire video confirms that the testing is far from over for the Kratos VS400 that is set to launch in November anytime now. Dates are not confirmed but the month is surely is. First leak suggested that the CS400 is named VS400. Second leaked confirmed the power rating would be 34.51 BHP. Third leak confirmed the god of war aka Kratos is the real name of this new Pulsar.

Read this too: VS400 will not be a Pulsar

Read this too: kratos Is the new Power Cruiser

Read this too: High Resolution Picture Gallery OF VS400

Read this too: LED lights for Kratos VS400 confirmed

Read this too: Kratos Benchmarking against Versys 650

Since the only thing we need to know is the price tag of the bike and the specification are missing, so we also would like to ASAP the kerb weight and torque of the bike that it makes. VS400 could start a revolution in the Indian performance motorcycling market as it is set to offer value and performance in the segment like no other. Launch isn’t far away and we should expect more details and probably more surprises at the launch! Stay tuned we have more on the same.