Recently there has been in a buzz in the SUv segment with the unveiling of the Hyundai Venue. With thi, the Venue will be Hyundai’s first product in which they will venture out in the sub 4 meter SUV segment. The Korean Automotive manufacturer is all set to launch this SUV in the mid of May 2019. Hence we get to you the on paper comparison of the upcoming Hyundai Venue with its rivals in the Indian market.

In terms of the on paper comparison the Hyundai Venue isnt big or spacious in comparison with its rivals, but it does get the right dimensions. All of the vehicles in the comparison are all most about the same dimensions. But if we have a closer look into them, we get to know that the wheelbase of the Venue and the Vitara Brezza is the same. On the other hand, the Venue is also as long as the XUV300 and the Vitara Brezza but the longest of all is the New EcoSport. The Venue is wider than the EcoSport but it is outshined with the XUV 300 which is the wides of all providing ample amount of cabin space. The tallest of all is the New EcoSport whereas the Venue is the shortest of all.

The Hyundai Venue will get two petrol engine options- 1.0 litre three cylinder turbocharged unit that can produce 120 bhp of power and 171 Nm of twist. Whereas it will also get a 1.2 litre engine option that can generate 83 bhp of power and 114Nm of twist. It also gets an option for a 1.4 litre diesel engine which is capable of churning out 90 bhp of power and 291 Nm of twist. The Maruti Suzuki Vitara Brezza is the only car to come with only an option of a diesel mill and along with the Tata Nexon they are the only cars to be offered with an AMT unit for the diesel engines as option. In addition to this, the Tata Nexon is also the only the car to be offered with an AMT unit for its petrol Motor but the Hyundai Venue also is the only one to get a 7 speed DCT unit. In terms of power output the 1.2 litre petrol unit of the Venue is underpowered whereas the EcoSport produces the highest power with its 1.0 litre petrol motor. 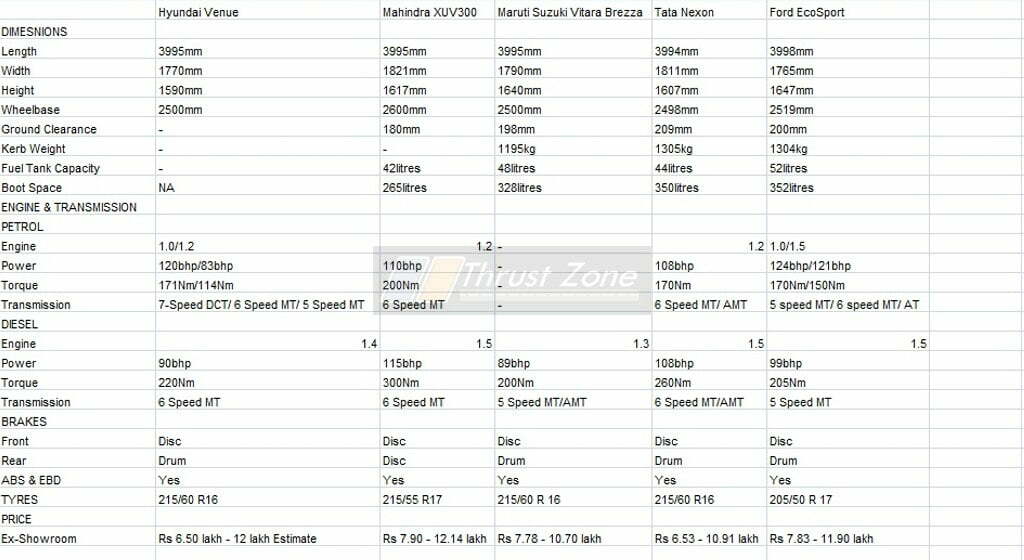 Here the Hyundai Venue will lead the pack as it will be the first SUV in the country to come loaded with connected features. It will be equipped with eSIM which offers vehicle settings to be controlled via an app. This app will include engine start, AC control door lock and unlock. On the other hand it will also also get features to contact emergency services and also inform emergency contact during an emergency. In terms of the infotainment unit all of the competitors get them which are also compatible with Android Auto and Apple CarPlay. Looking at the size of the screen, the Nexon gets a smaller 6.5 inch unit whereas the Vitara Brezza and the XUV 300 gets slightly bigger 7 inch units. The largest one is available on the New EcoSport measuring 8 inches whereas the Venue will also get a similar size unit as well.

In terms of safety features both the Vitara Brezza and the Nexon only get front dual airbags in all its variants. On the other hand the Venue and the EcoSport is offered with six airbags while the XUV 300 leads here with a total of seven airbags. Mahindra has also taken a step ahead with the addition of first in class features such as four disc brakes and front parking sensors. As of now, in terms of the recent Global NCAP rating the Nexon outshines as it is has bagged five star ratings. But most of the cars in the comparison haven’t undergone crash tests so its too early to comment into this.

The most affordable SUV of the lot is the Tata Nexon as it retails between Rs.6.48 lakh to Rs 10.90 lakh. Just after it is the the Maruti Suzuki Vitara Brezza which gets a price tag ranging from Rs Rs.7.76 lakh to Rs 10.42 lakh. Whereas the Mahindra XUV 300 falls in between as it bears a price tag of Rs 7.83 lakh to Rs 11.90 lakh. As of now the New EcoSport is the costliest of all but it is expected that the Hyundai Venue once launched will be priced in the 8 to 12 lakh price range making it the highest priced car.