As per the spy shots floating all over the internet we know that Two New Ford EcoSport Variants are coming, namely the Titanium S and Signature Edition. But there is something really special that also add to the EcoSports line up. Ford will be introducing a performance-based 1.0 litre EcoBoost engine for the EcoSport.

Once launched the EcoBoost powered EcoSport Titanium S trim will be the top spec variant. With the launch of this model, Ford is aiming for the customers who want the EcoSport with a peppy engine and something better than the standard car. In addition to this, the EcoBoost Titanium S variant will also feature a stiffer suspension which will provide better handling and quick steering.

On the other hand, the Titanium S variant will also get a 1.5 litre diesel engine as an option which produces 100 bhp of power. This Trim will also get addition sunroof and 17-inch alloy wheels. Whereas standard features on the Titanium S variant include an HID headlight unit, tweaked instrument cluster, tyre pressure monitoring system and a 4.2-inch infotainment system. Well on the exteriors Ford is providing black inserts on the grille, a new paint – Satin Orange with colour coordinated interiors and contrast sunroof.

That’s all for the Titanium S trim speaking about the Signature Edition, this trim will be based on the Titanium + variant. Aesthetically, the EcoSport Signature Edition will get a new design 17-inch alloy wheel, black inserts on the front grille and at the rear, it will get a spoiler. The interiors will get the Special Edition badge all over the seats along with all black theme with blue stitches. This blue stitch is featured as a contrast to the new exterior paint scheme- Anodised Blue. Powering the Signature edition EcoSport will be 1.5-litre Dragon series petrol engine that produces 123bhp of power and an optional 1.5-litre diesel mill that produces 100 bhp of power. 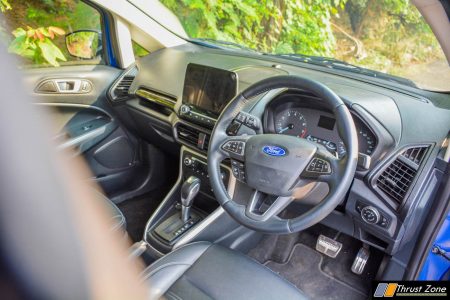 There are some rumours about a new six-speed manual gearbox which will be introduced. But the 1.5litre petrol and diesel engines will be coupled with the same five-speed IB5 gearbox. Both the trims are expected to be launched in the coming of May 2018.