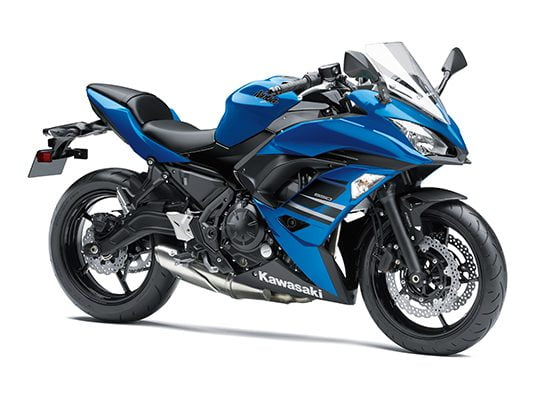 Kawasaki has launched the Ninja 650 ABS in a blue shade which has been priced at Rs 5.33 lakh (ex-showroom, Delhi). With the launch of the new shade, the previous black colour has been discontinued. On the other hand, Kawasaki will continue to sell the Ninja 650 ABS KRT edition which was launched in India last year.

This is the first time that Kawasaki has launched a bike in India splashed with a shade of blue. Mechanically there aren’t any changes and the bikes sits on the same trellis frame made of high-tensile steel. The sports tourer is continued to be powered by parallel-twin, 649cc, liquid-cooled engine. This mill produces 68 horsepower at 8000rpm and 65.7Nm of twist at 6500rpm and is matted six-speed manual gearbox. To stop this 196 kg bike are a set of dual semi-floating 300mm diameter petal discs on the front wheel and a single 220mm petal disc at the rear.

The bookings for this sports tourer have already commenced in all the showrooms across India. The bike will only be available in limited numbers. So if you’re interested in buying the Ninja 650 and want to stand out from the crowd, this could be the perfect one for you.

With the launch of the Ninja 650 Blue Color, marks Kawasaki’s first launch for the year 2018 in India. At the upcoming Auto Expo, the Japanese manufacturer will most likely display the new Ninja 400, Ninja ZX-10R SE, Ninja H2 SX and a bunch of dirt bikes.