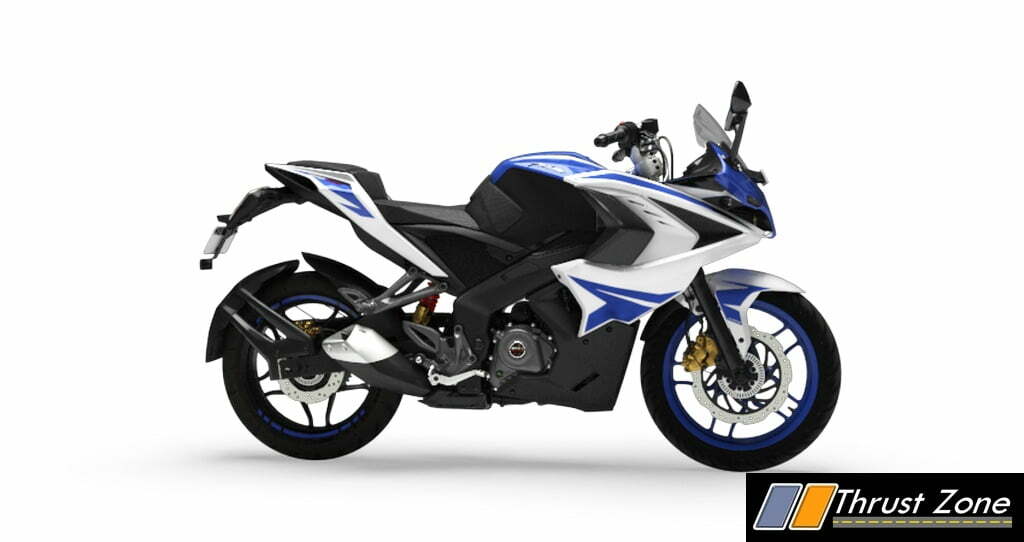 2017 Bajaj Pulsar RS200 BSIV unveiled in a white and blue scheme, is emission compliant and now launched in India

The Bajaj Pulsar RS200 has suffered a bit in terms of its niche ever since the talk of the recently launched Bajaj Dominar 400 gained momentum. Then with the launch of the Dominar 400 and especially its shocking price tag, many wondered if the Pulsar RS200 made sense any longer or not. But Bajaj Auto, as always knows better. The Pune based motorcycle making behemoth has just unveiled the 2017 Bajaj Pulsar RS200 with a BS IV compliant engine at Turkey. The unveiled bike wore a stunning paint scheme that has not been previously seen on the RS200. Today, the India specific model is here with a new paint scheme and other details are here from Bajaj.

The 2017 RS200 continues to have the same design and we reckon, dimensions too as that of the current bike. The bike still being fairly new to the market does not command any elaborate design upgrade in any case. The new paint scheme though, looks stunning with its white and blue scheme looks good and reminds of someone else though. The dimensions of the 2017 model should remain same at 1999mm length, 1114mm width and a height of 765mm. The ground clearance of the 2017 Bajaj Pulsar RS200 does continue to have a 157 mm along with a kerb weight of 165Kg.

Read this too: NS200 BSIV VERSION COMING IN 2017 -DETAILS AND NEW PICTURES HERE

Read this too: NS160 BSIV VERSION COMING IN 2017 -DETAILS AND NEW PICTURES HERE

Read this too: DOMINAR 200 COULD BE THE NEXT BIG THING FROM BAJAJ

As it is evident, there has been no revolutionary work done for the 2017 version except for the aforementioned new paint scheme. Thus the 2017 Pulsar RS200 will continue to have a Perimeter frame that arrived with the erstwhile NS200. The suspension will also be carried forward and will be Telescopic with anti friction bush for the front while a Nitrox mono shock absorber with Canister does duty at the rear. Braking will continue to be taken care by the 300mm single disc up-front and a 230mm disc at the rear, both being a Bybre supply. You will be able to buy the Single Channel ABS as standard version as well.

The engine on the 2017 Bajaj Pulsar RS200 BS IV continues to be the 199.5cc single cylinder SOHC 4-valve, Liquid Cooled, triple spark, FI unit. However, we reckon there might be some changes in the power outputs due to the up-gradation to BS IV compatibility. The engine continues to make 24.5 BHP of power and 18.6 Nm of torque.

As mentioned above, the bike will have a version with single channel ABS as standard. While the new 2017 Bajaj Pulsar RS200 BS IV also get AHO functionality as standard.

Read this too: NS200 BSIV VERSION COMING IN 2017 -DETAILS AND NEW PICTURES HERE

Read this too: NS160 BSIV VERSION COMING IN 2017 -DETAILS AND NEW PICTURES HERE

Read this too: DOMINAR 200 COULD BE THE NEXT BIG THING FROM BAJAJ