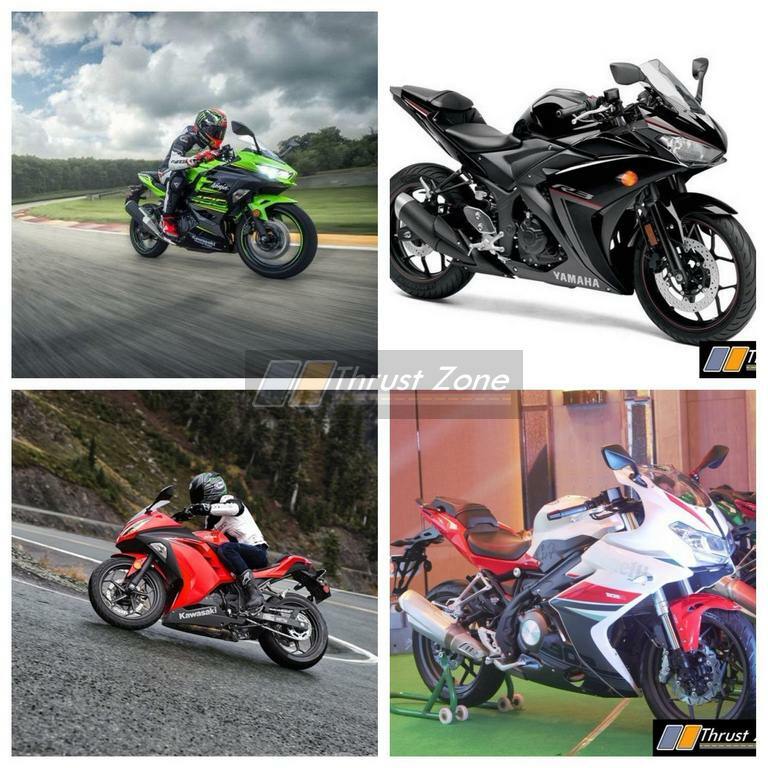 Recently Kawasaki launched the Ninja 400 in the Indian market. The Ninja 400 is placed between the Ninja 300 and the Z650 in accordance with its price. According to Kawasaki India’s Managing Director, the Ninja 300 is for beginners while the Ninja 650 is mainly for experienced riders. With the launch of the Ninja 400, it will cater the need a buying a sports bike between the 300cc to 650cc engine displacement category. So here we compare the Ninja 400 Vs Yamaha R3 Vs Benelli 302R for you to decide.

Kawasaki Ninja 400 Vs Yamaha R3 Vs Benelli 302R vs Ninja 300 Aesthetics and features:

Ninja 400:
Kawasaki has designed the Ninja 400 in a sharp and sporty way. The design has been inspired by its elder sibling the Kawasaki H2. It gets large volumes of body works which gives the Ninja 400 the look of a high capacity bike. In addition to this, the Ninja 400 also gets split LED headlight unit.

Yamaha YZF-R3:
Yamaha recently updated the R3 for the 2018 version. It now comes with new shades such as Racing Blue and Magma Black. In terms of features, the YZF-R3 now gets dual channel ABS, Metzeler M5 tyres and it now comes powered by an Euro-IV compliant engine as compared to its predecessor.

Benelli 302R:
The front end of the 302R is pretty big and has a heavy look, but the overall profile of the bike is long. As compared to the pre-production model, the production model gets graphics. Coming to the features, it was the only bike in the comparison to come with a dual channel ABS when launched. In addition to this, it is the only motorcycle amongst the three to come equipped with an upside down USD fork and twin disc at the front.

Ninja 400:
The Kawasaki Ninja 400 has the highest cubic capacity engine in comparison with the other three motorcycles. Comparing with its younger sibling the Ninja 300, this bike gets a small fuel tank and a lightweight trellis frame. The Ninja 400 has the highest power-to-weight ratio in comparison with the other bikes and it is up to 283.2hp/tone.

Ninja 300:
The Ninja 300 has a kerb weight of 172kg and it produces 39 horsepower, hence the power-to-weight ratio of this motorcycle is 226.7hp/tonne. In comparison with the Benelli 302R which weighs 198kg, the Ninja has a lighter weight and has a better power-to-weight ratio. In addition to this, the Ninja 300 produces 0.5Nm of more torque than the Benelli 302R making it the second lowest torque producer among the four motorcycles.

Yamaha YZF-R3:
The Yamaha YZF R3 produces 42 horsepower and when all the liquids are topped up it weighs 173kg (kerb). In terms of power-to-weight ratio, the YZF R3 fairs decently with a ratio of 242.7 hp/tonne. On the other hand, the R3 generates 29.6Nm of torque which less as compared to the Ninja 400 which produces 38Nm of torque.

Benelli 302R:
The Benelli 302R produces the least amount of power and torque, in comparison with its competitors. It produces 38.2 bhp of power, 26.5Nm of torque and the kerb weight of the 302R weighs about 198kg making it the heaviest bike of all. Hence the power-to-weight ratio also is lower as compared to its competitors and the ratio is 192.9hp/tonne. 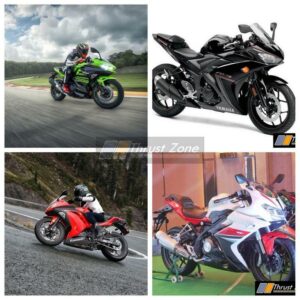 So the Ninja 400 offers much better performance and also comes equipped with the latest technology in comparison with the Ninja 300, YZF R3 and the 302R. But this does come with a price tag of Rs 4.69lakh (Ex-showroom, Delhi) which is almost a lakh more than its competitors.