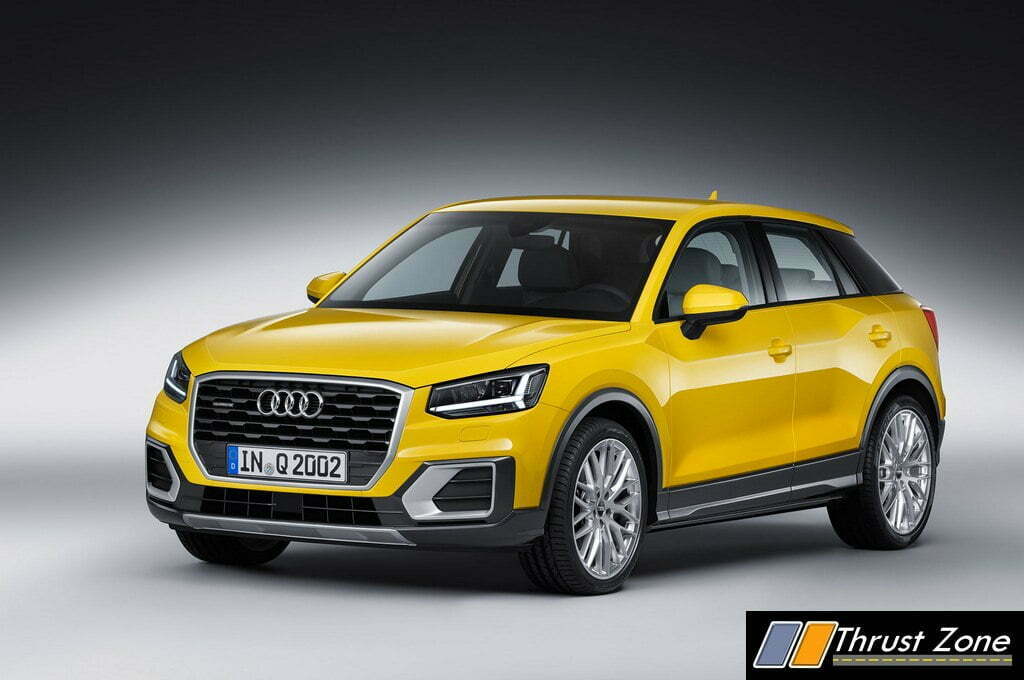 Audi is preparing to launch the Q2 crossover SUV in the Indian market. It is expected that Audi will most probably launch the Q2 during the end of 2018 or somewhere around the mid of 2019. Once launched in India, this will be the smallest model in the Q range and it will be the cheapest SUV to be on sale from Audi’s stable.

Audi would most likely offer the Q2 crossover SUV with a price tag starting from Rs 25 lakh (Ex-Showroom). With this, the Q2 will be positioned above the Audi A3 sedan. Just like the A3, Audi will most probably power the Q2 with the 1.4-litre turbo petrol motor and the 2.0-litre diesel motor. The 1.4-litre turbo petrol had debuted first with the Audi A4 and it produces 150PS of power and 250Nm of twist. But the power and torque configurations of the diesel motor are unknown. The petrol motor and diesel motor will come matted with a seven-speed S-Tronic automatic transmission as standard. But the diesel motor could most probably get the six-speed manual transmission as well in the future.

If we see, the Q2 which is on sale in the international market, it gets many other engine options. Most of the global markets, get the 1.0-litre TFSI petrol engine which produces 114 bhp of power. We could expect that Audi to get this small displacement engine option to the Indian market. If Audi does get this 1.0-litre TFSI petrol mill to India, it will come coupled with the seven-speed DSG gearbox.

On the other hand, there are even chances that Audi will be launching the Q2 with an extended wheelbase version. Just like the Q2 available in the global market, it may come in three trims- SE, Sport and S Line in India. Stay tuned to ThrustZone to know more about the launch of the Q2 crossover SUV.

Read this too: Audi A3 cabriolet Launched

Read this too: Audi A3 Facelift Launched

Read this too: Audi A5, S5 BratPack launched

Read this too: Audi Q5 Launched in India

Read this too: Q7 petrol launched in India

Read this too: Audi A4 Diesel launched

Read this too: Audi A7 India launch soon