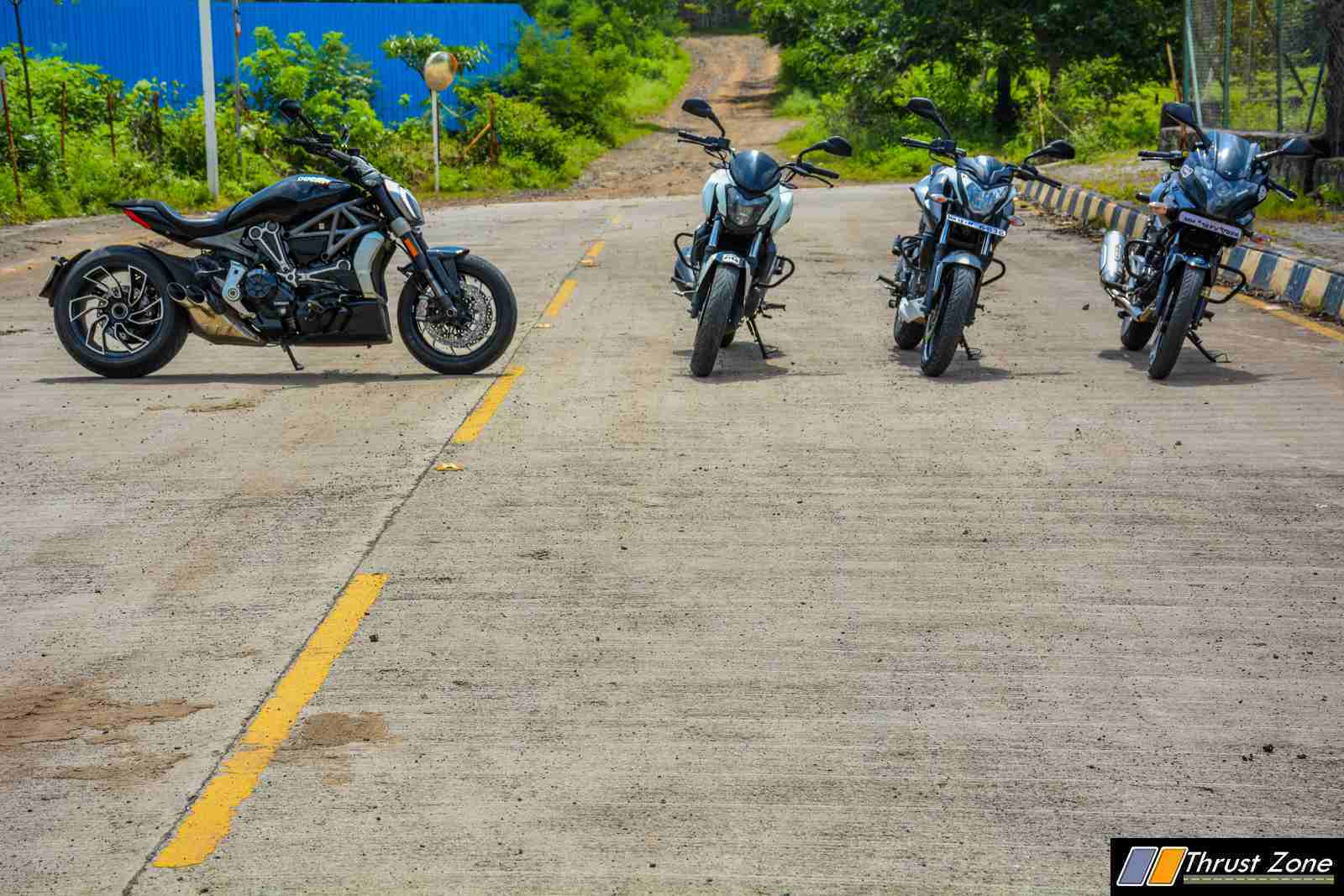 The Puneris and the Italians, they share a special bond, seen on the streets every day. More apparent when, Dominar Meets Diavel

When was the last time you read a story on the Bajaj Pulsar and other new performance motorcycles that the manufacturer has put out in the market over the last 15 years. The last story you heard about the brand is when they updated a motorcycle, cut or increase prices rolled out a Cosmetic update very recently GST rates that have changed the manufacturing dynamics in the country.

Although that is a different story for a different day and lets exercise on the Bajaj group which has been taking industry changing steps all this time. They started off with an automatic scooter and today they don’t believe in that. They ventured into a partnership with Kawasaki and now they have broken it. 50% stake in KTM and they change the way the world looks at entry level motorcycling. If this wasn’t enough hand tied up with another iconic manufacturer Triumph to make bigger bikes and help each other sell and make motorcycles for the world. 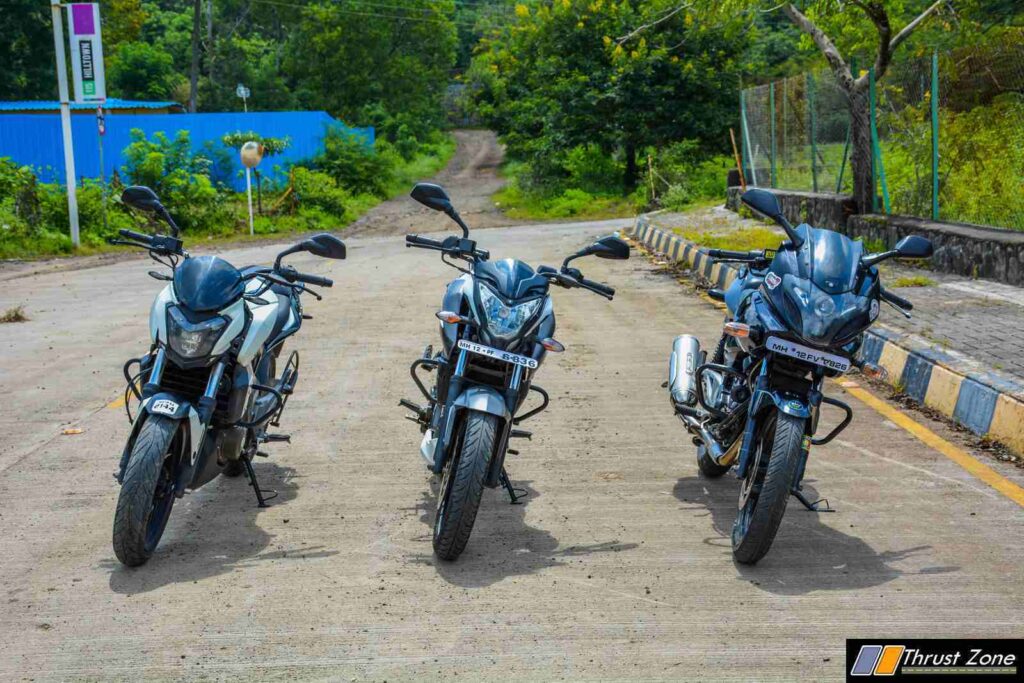 While all of this was happening Bajaj also started working on developing many new brands in the domestic market such as the Dominar and the Vikrant series of motorcycles. Bigger Dominar as rumour suggest are more coming in very shortly. The V series is doing extremely well for the company in terms of numbers and soon we’ll be rolling out updates to the same to make it even more stronger as a proposition in the Indian market. 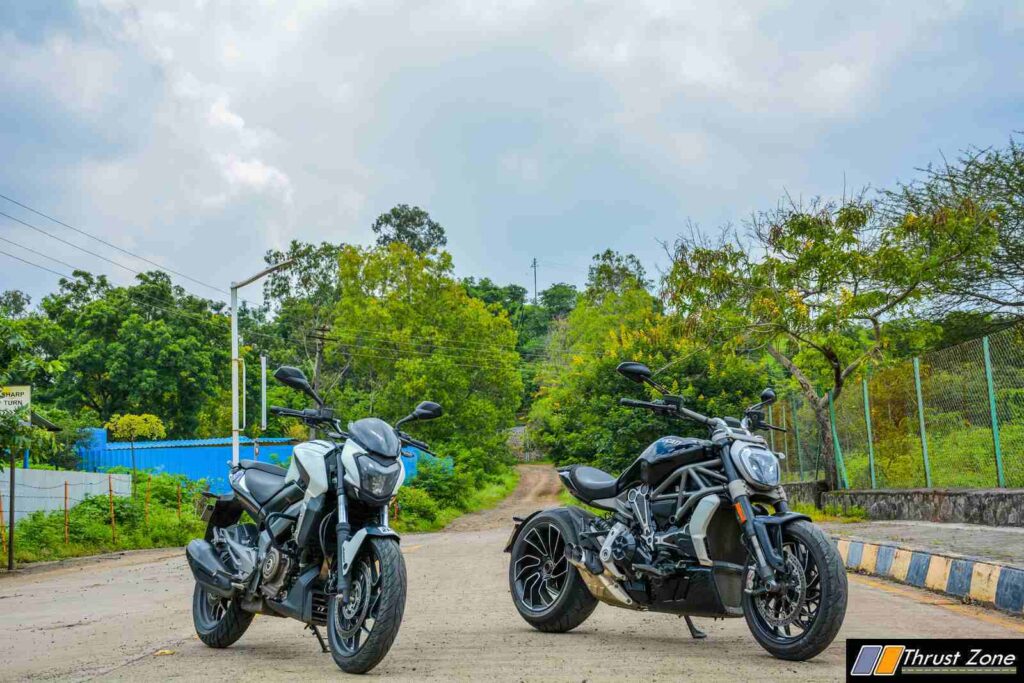 Today’s generation is all about taking it easy. Bajaj meanwhile is taking revolutionary steps in the motorcycle world to give the market something that they probably never thought about. Who knew something like a Duke 390 could exist someday and would be a benchmark for years to come. But we all knew there was a probability of a quarter litre KTM any day. When you start thinking about it you realize that Bajaj has been taking inspiration manufacturers around the world in one way or the other. Bajaj wanted to offer performance motorcycles to the world and mostly to the Indian market. A market that is value driven not cost driven.

The inspiration came from a brand who also makes just motorcycles and nothing more. A brand that is gone through thick and thin changed its fortunes with an adventure motorcycle and then offered a variety of cycles that today are iconic and trend setters in the industry worldwide. 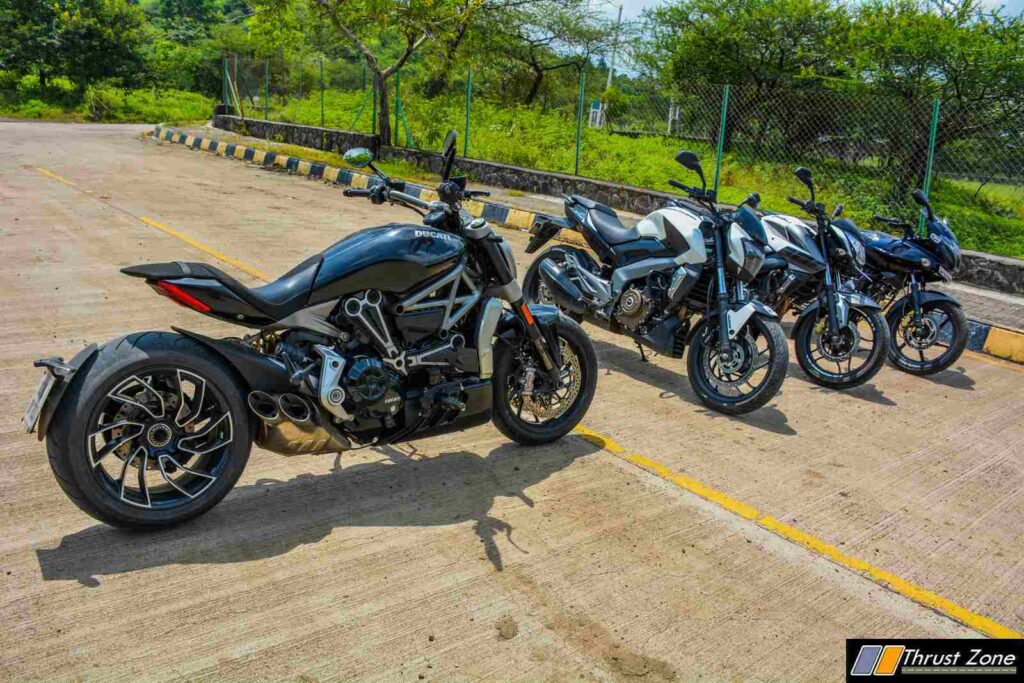 Ducati is that manufacturers if you have not understood by now. Bajaj didn’t exactly copy Ducati in every way but did take inspiration like they mentioned earlier in one way or the other. Both these motorcycle manufacturers had very high similarities when it came to designing the kind of package that would inspire confidence to the rider but still would feel incomplete. This changed dramatically as flexibility to ride and approach these motorcycles became easier thanks to changing conditions of mindsets and financial firepower available for the masses today. Stories went, words flew faster than the motorcycle itself and performance motorcycling in India today is something, the rest of the world stalks us today. 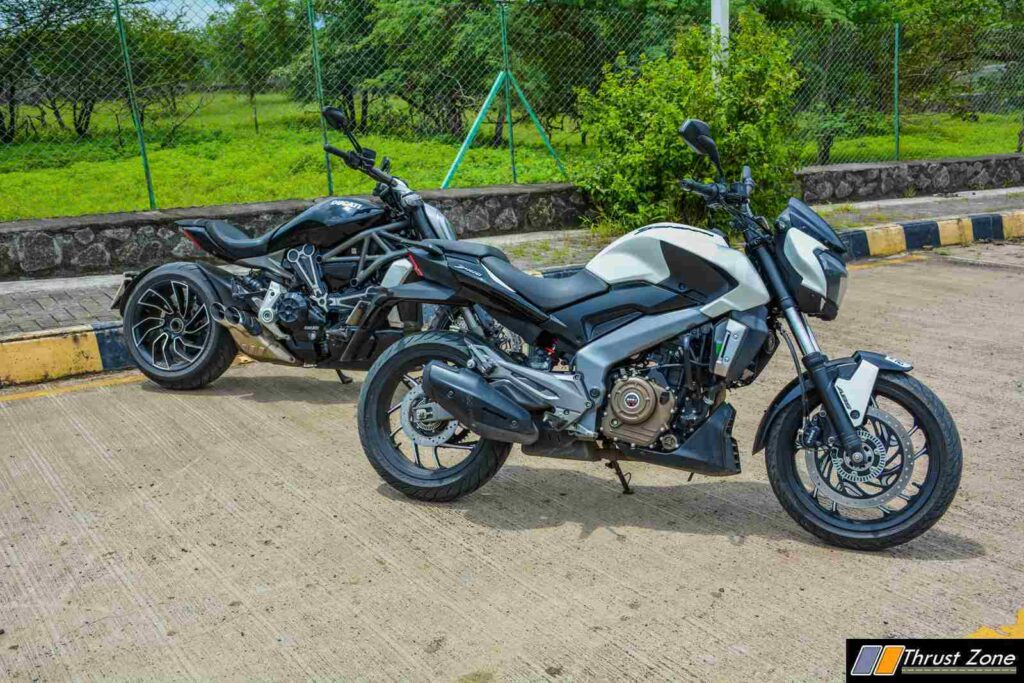 A starting point to something now seems matching the idea of the most demanding customer base, is what we think is how far these brands have come across. But we have seen today that the emotional appeal still exist, but muted. Why? thanks to emissions tightening up along with fuel efficiency standards going up as well that all manufacturers need to meet. 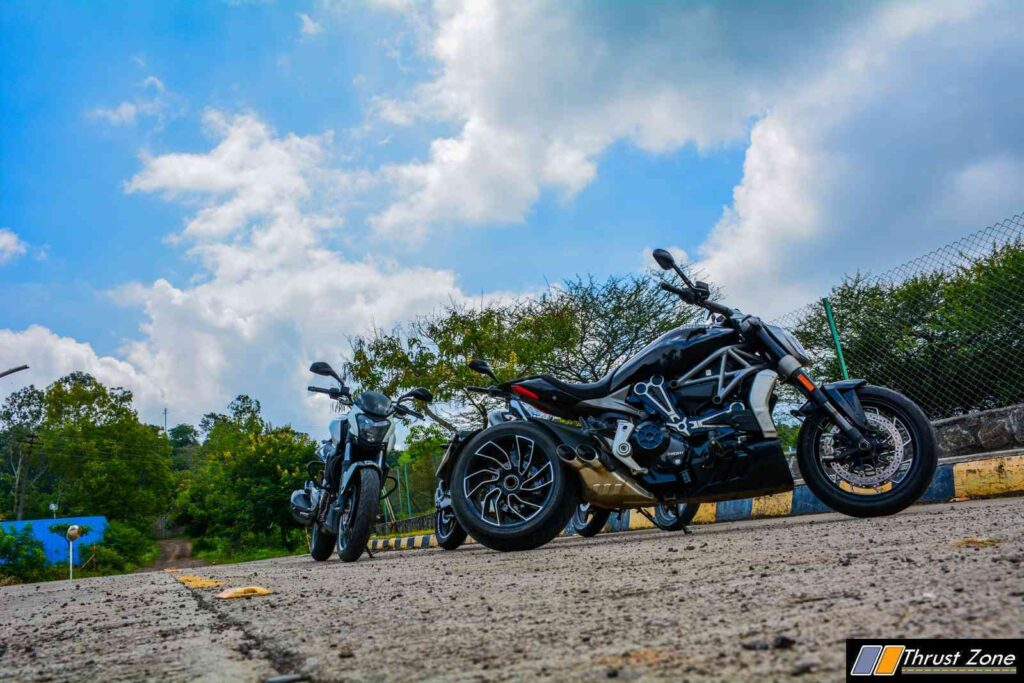 Motorcycles become shorter and sharper to ride. The design language which became more apparent and simple at the same time while maintaining their secret queues in one styling element or the other. Look where the Monster is today and the Street-Fighter was couple of years earlier. Look where the Pulsar 220 is and where that Pulsar 200NS stands. Look how the Ducati Diavel paved way for the new XDiavel. Who knew after offering sporty cruiser Like The Avenger Bajaj would go one step ahead and and offer a highly sporty Dominar 400. This is the drastic change and flexibility that has been offered that i was mentioning a paragraph earlier.

The approach from both companies has always been with a very clean slate but it has been inspired from an Idea. Idea which had to be unique, something different, out of the box the marketing fundas that everybody learns in the MBA classes only if you can manage to put out the real thing on the road. Pun unintended in this case. 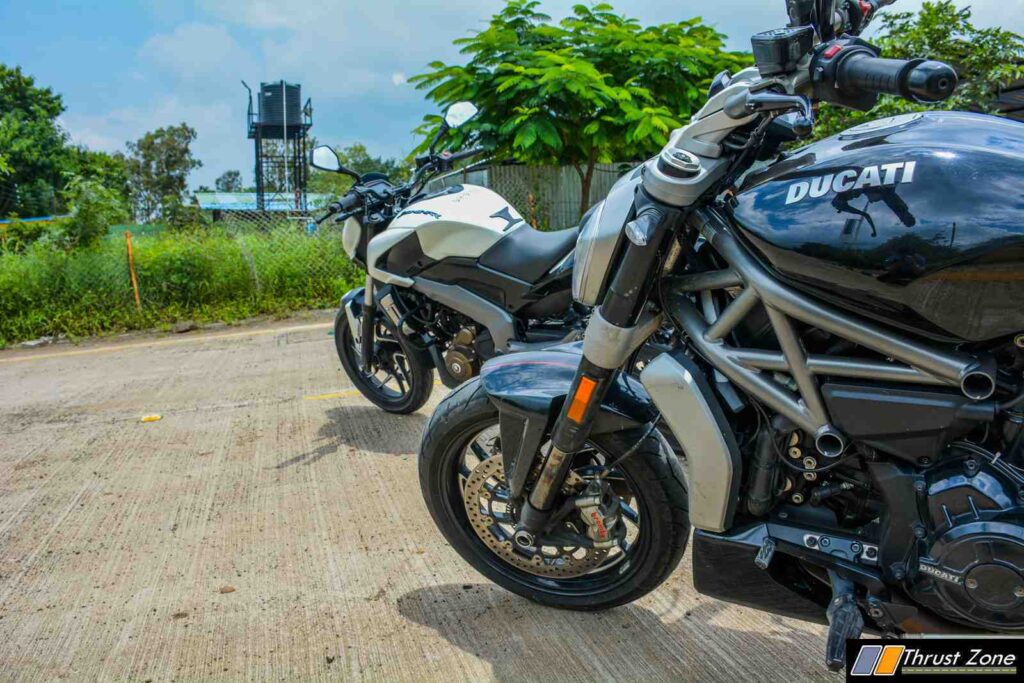 But there has to be a purpose despite taking inspiration from an object. The purpose of being efficient, the purpose of finding the right balance. Balance of aggression and linearity. The balance of striking a cord and making a statement at the same time. The purpose of being focused on many subsets of just one table, to reach the highest level of curiosity and to create a image of relentlessness in the quest of reaching perfection that fulfills the goals of the manufacturer and customer so that the idea of riding Into the horizon never ends on every side of the triangle which connects us all.