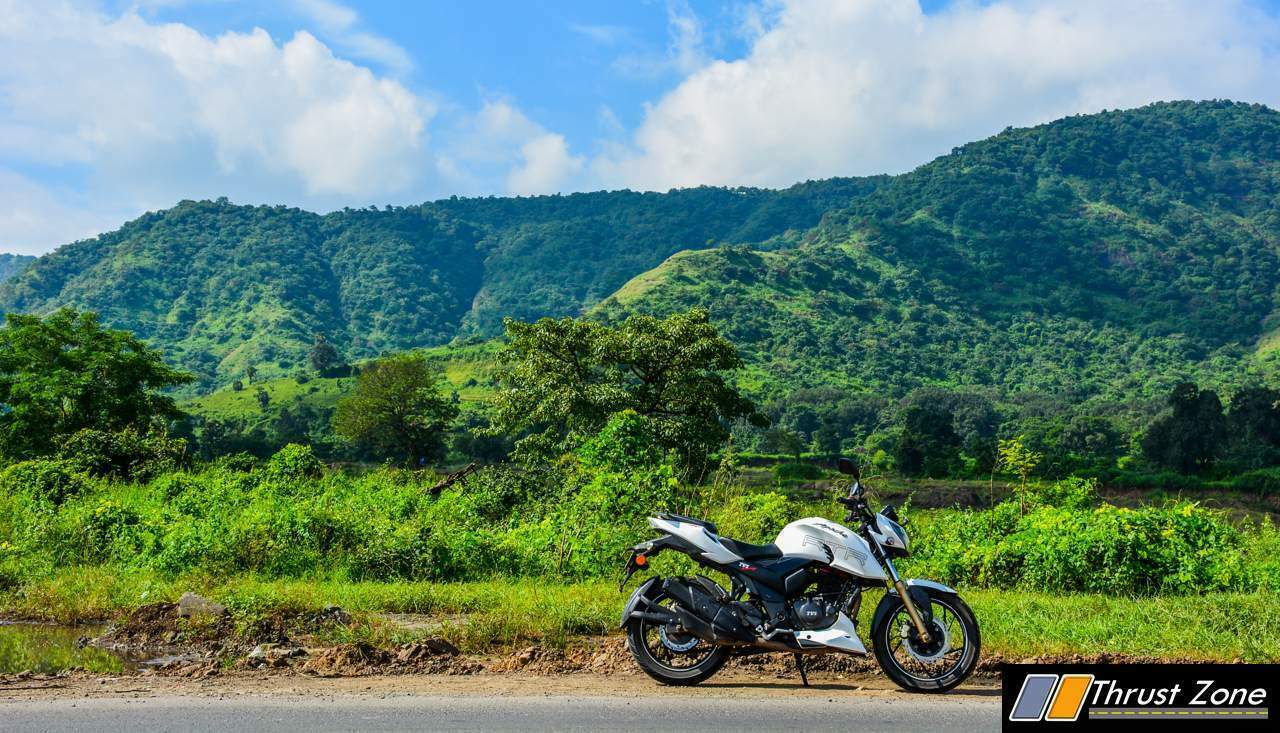 2016 Apache RTR 200 is the ideal bike you need to start off with when it comes to sport riding as it can tour, commute and race at the same time!

“Take your time and make sure reports are right.” This is something we all probably heard off when when we work for some organization. This is, what we think, how TVS works as well. The brand is known for making very good products in its class, but it takes its time and deliver the very best. The Apache 180 came when we were expecting a 200. The 200 came today when we all expected a 250cc. However, no matter what, it is finally here and it promises to shake up the segment. Apache RTR 200 is being offered in multiple options to choose from right from fueling system to tyre options. We drove it on the track last year and today, we have 800 km road test for you to tell you every detail about the bike that we encountered. Is the Apache one of the best bikes under one lakh right now? Let’s find out! 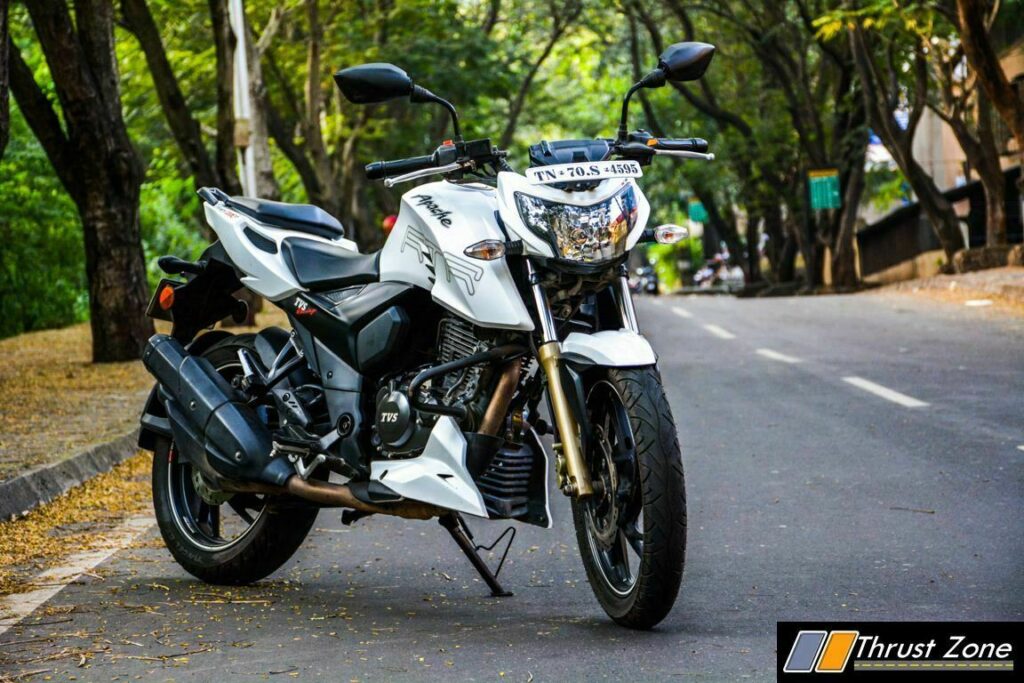 When it comes to the design, the new bike is radical and all new. There is hardly any panel sharing with the new bike here. The fuel tank and the shrouds that it has extends even further and has a sharp end. There are vents in it that pump air on the engine head which has a pipe below to make sure engine stays cool. Headlight is very much inspired from the naked international bikes. The DRL design is very well designed and integrated. That reminds us that the headlight throw and illumination is spot on too. The engine belly fairing is always welcome and makes its way to the new Apache RTR 200. Multi spoke alloy wheels again remind us bikes of higher capacity. 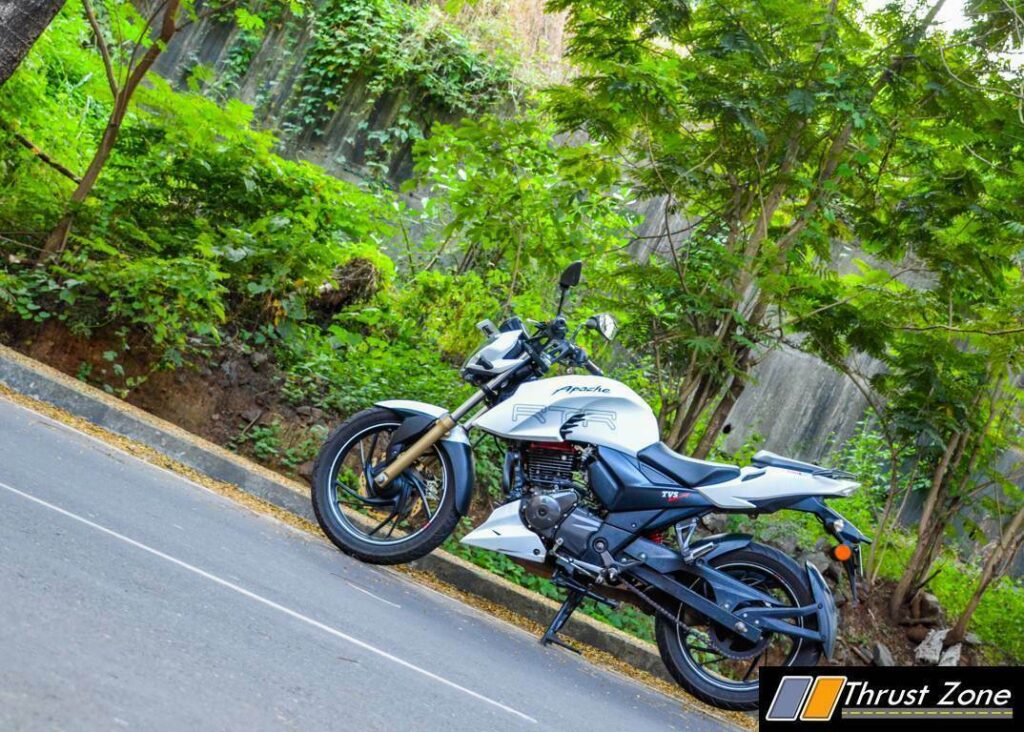 The exhaust on the other hand resembles to the Ducati Street fighter of the past. Exhaust is a dual port unit is large and looks quite futuristic. Side panel is split into as a part of the rear is raised. Remove the rear hugger and the bike will shout sportiness like no other. Golden forks at the front continue to typical Apache and look quite well with the white test bike we had. We must say we have seen black Apache RTR 200 on the road and they are total the best buy right now! 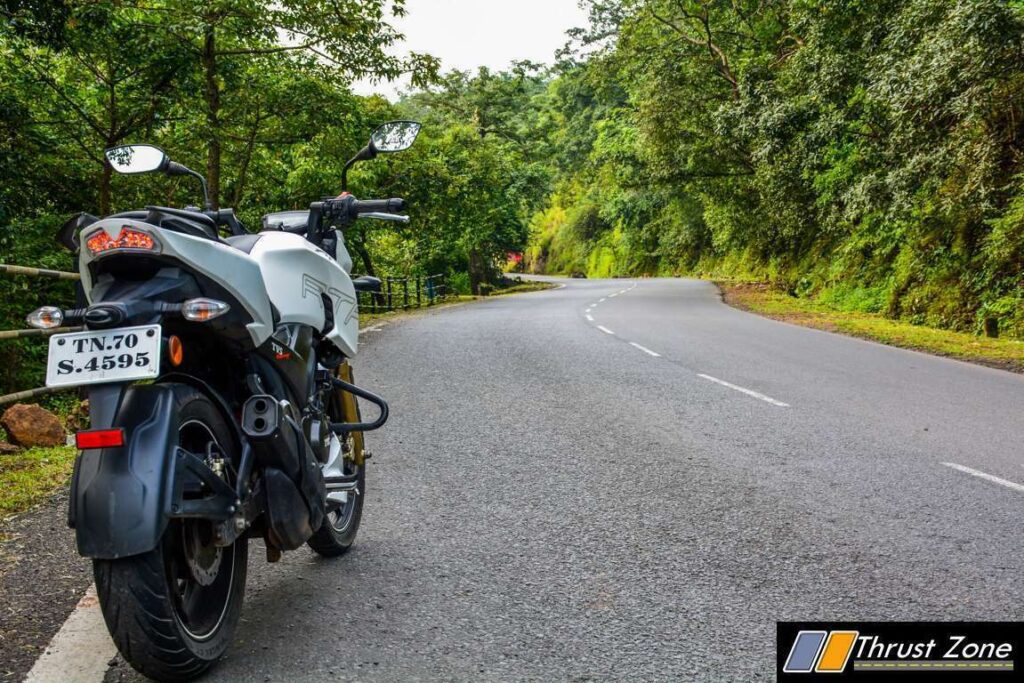 The rear tail piece also includes the new split seat design. The seats themselves are very large and are designed well. The tail-lamps this time are quite odd despite two pod layout. Overall, profile of the Apache 200 continues to typical and in line with tradition with older bikes. Short, purposeful and dynamic looking motorcycles from TVS makes this futuristic panels equipped motorcycle one of the best in the market today. 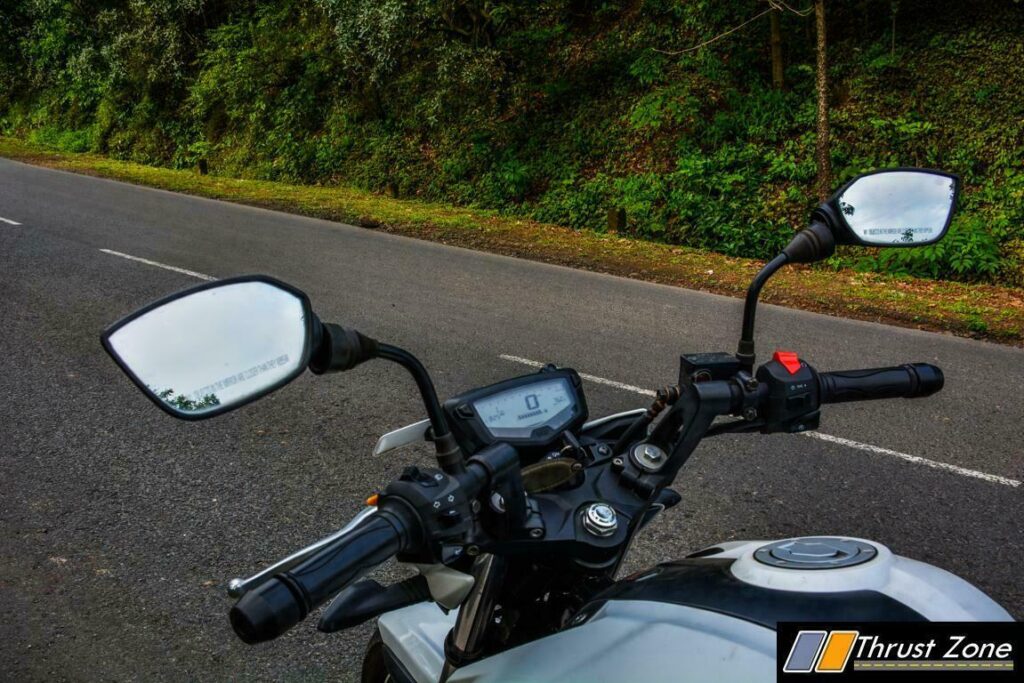 Cluster has all the information you will need. Race timer, lap time, time, dual trip meters, digital speedo and tachometer along with tell-tale, warning lights, service reminder and much more is on offer. Fuel-efficiency readings are not here though apart from the digital fuel, gauge nothing is on offer in that respect. Switches and plastic quality of the same are really good and top-notch quality all around can be seen. What we did not like is the tactility of the pass light switch, which feels flimsy as well. 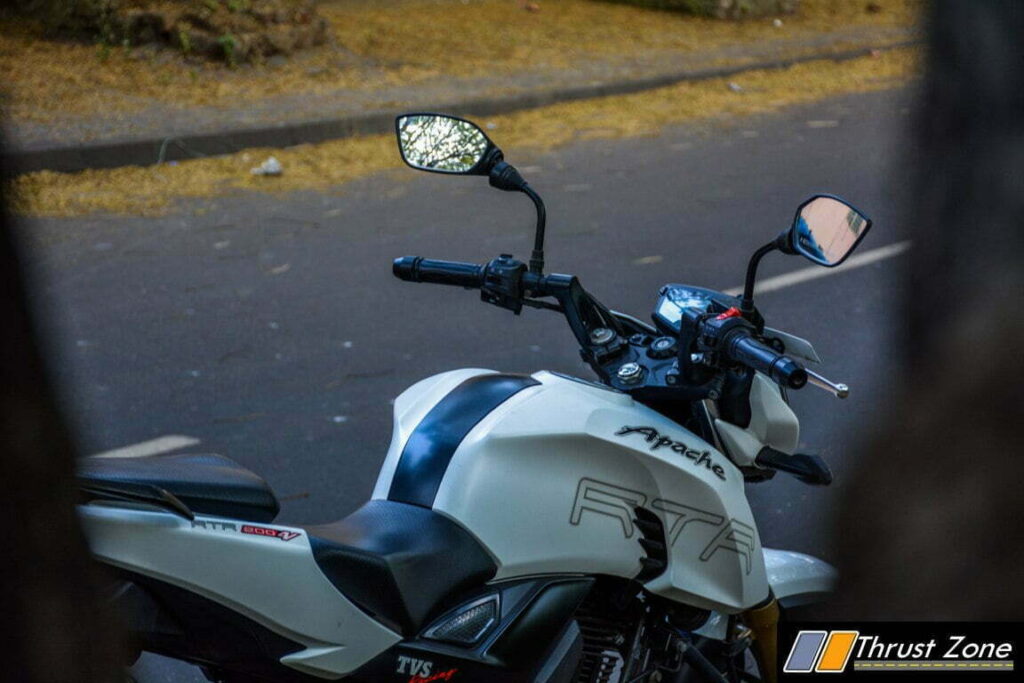 Seating position is upright but you sit lower and the handlebars are raised. All of this means you get a sportier riding position but isn’t uncomfortable. Legroom from the raised footpegs can be slightly tight for tall riders, but people under 6′ should just fine for short or long journeys. Seats are really good and our multiple trips, short and long were not an issue at all. Tank is well shaped and locking your knees into them isn’t a hard task. Grab handles are large and so is the pillion seat for the pillion to be comfortable and balanced. Mirrors are well positioned, but they seem to be coming of loose of every test bike (glass area, not the main mounting point) that we have seen. 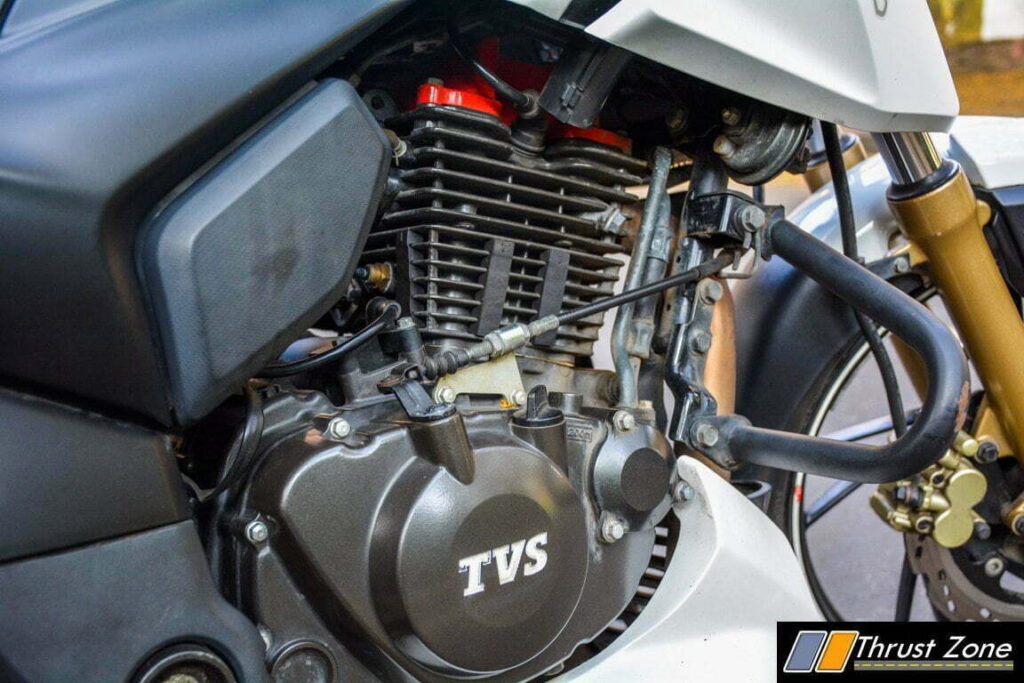 Power comes from a 200cc engine that now has a 4-valve head and an oil-cooler. Both these things plus the typical refinement that we see TVS engines has transformed this engine into the most smoothest engine in this category and above and below it. Simply, this engine is so smooth, you barely feel any friction yourself despite redlining it all day once you sense the piston going up and down. All of this also means that this time there is NO vibrations whatsoever like the previous generation motorcycle. Sure, there is a negligible amount which even Japanese engine have at the redline, but that’s about it.

Low-end torque is just about does the job, but the mid range of the bike is stellar as it picks up pace from 60 km/hr to 115 km/hr real quick. There isn’t top-end power like a 4-valve bike should. The reason behind is that the power band and gearing have been matched together and they have tuned for rideability. The power is in a specific tailored area which is the mid-range and top-end to an extent (We all expected more). 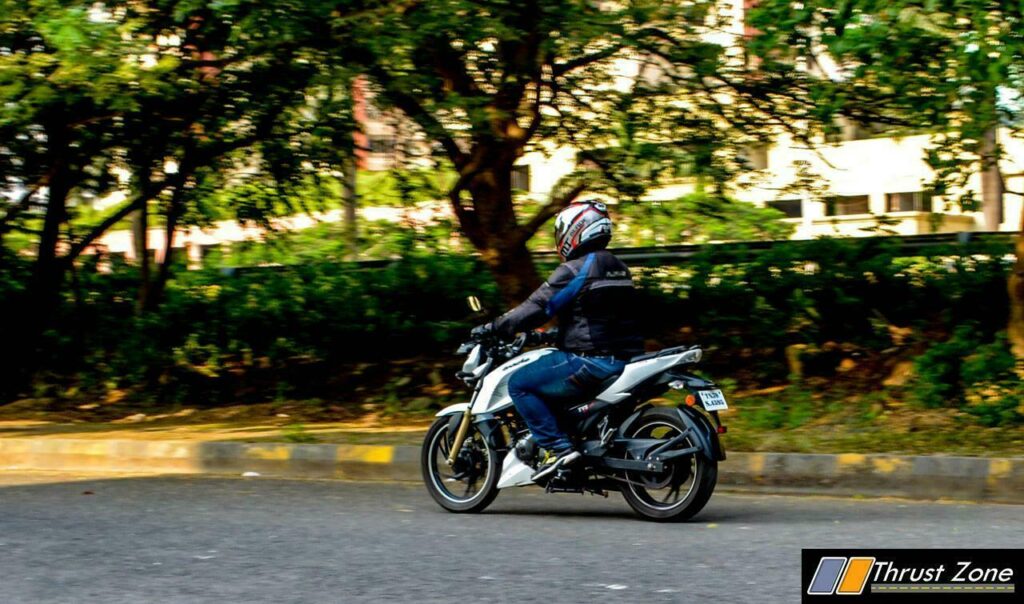 Overall, you won’t be complaining much because according to this segment it has on-par top-speed along with stellar off the line acceleration. TVS claims 60 km/hr comes in 3.9 seconds and 100 km/hr comes in 12 seconds from stand still. Throttle response as always is stellar and the exhaust note along with induction note is the reason you can fall in love with the motorcycle immediately. It is very intimidating along with spectacular overall performance makes it one of the best performer in the market today. 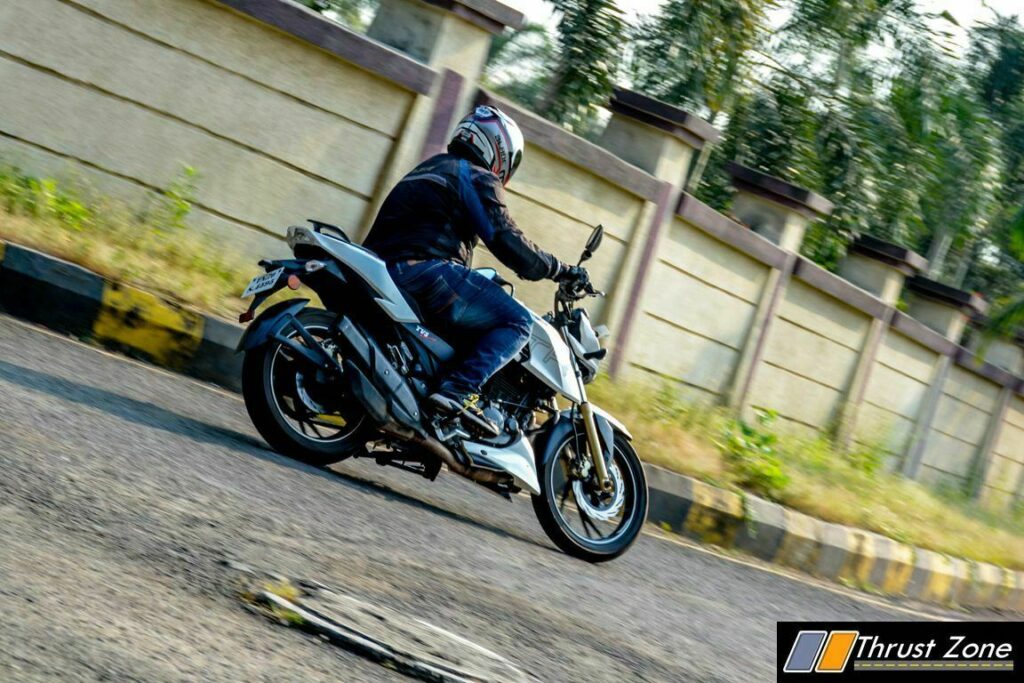 The moment we saw the fact that the motorcycle has a twin-tube tubular frame we were disappointed with. Every aspect of the RTR 200 was suppose to be on the higher side. However, when we rode the motorcycle with completely new suspension (fatter front forks) on both ends and the completely revised chassis we were in for a surprise.

The agility and nimbleness that the RTR 200 offers is just like its sibling. The new monoshock does wonders for the new motorcycle. ‘Apache Dynamics’ is what enthusiast call on the road, is witnessed while riding. Corner carving continues and thanks to highly improved TVS Remora tyres and Pirelli optionals (Sport demon at the front and Angel GT at the rear) on our test bike made sure we were cornering beyond the limits of we thought of. TVS has opted for larger tyres than this segment has seen before. 100 section at the 130 section at the rear. 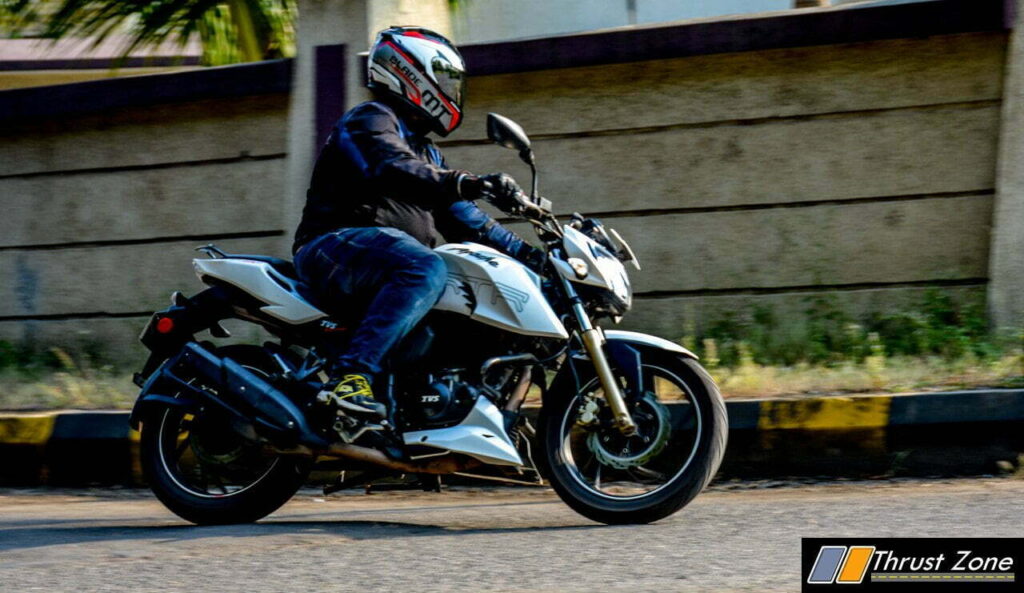 Turn-in is what we particularly did not like but despite that, it is quick enough to turn. We wish the front geometry was lower on rake angle. However, as always, that has its advantage too. Higher rake angle gives rock solid high speed stability and there isn’t any nervousness from the motorcycle despite heavy cross-winds like the previous bike, you do feel a bit a weave, (very minutely) at the very edge of its performance. 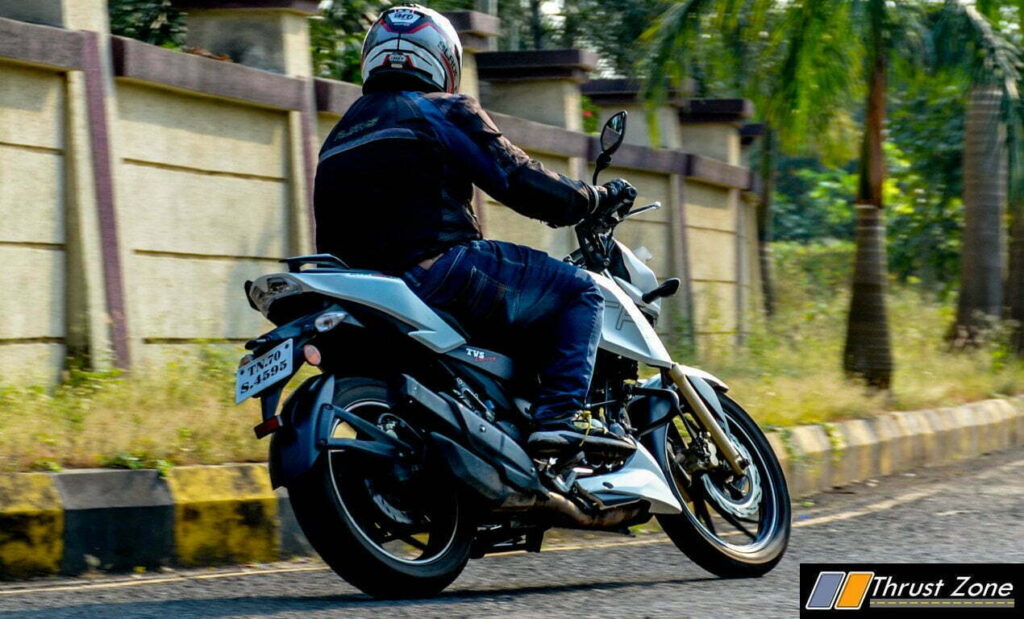 The motorcycle, despite these characteristics has good ride quality, but it is substantially more stiffer than the previous motorcycle. However, it isn’t downright harsh like, such as, the KTM motorcycles. Petal brakes at both ends worked really good as there was enough initial bite on both ends but we expected it to be better. 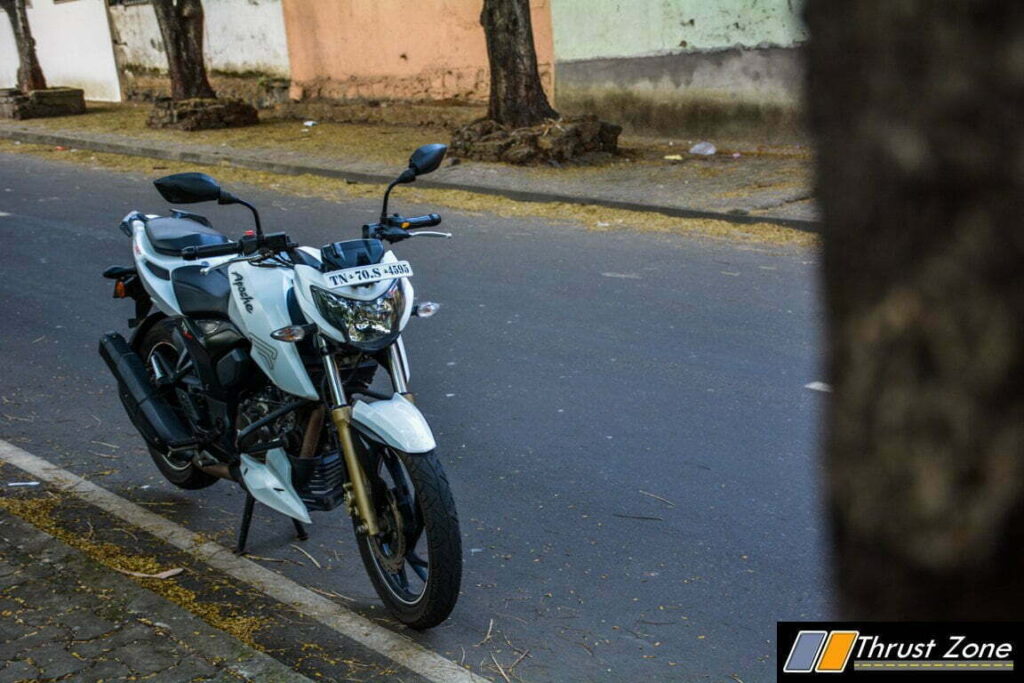 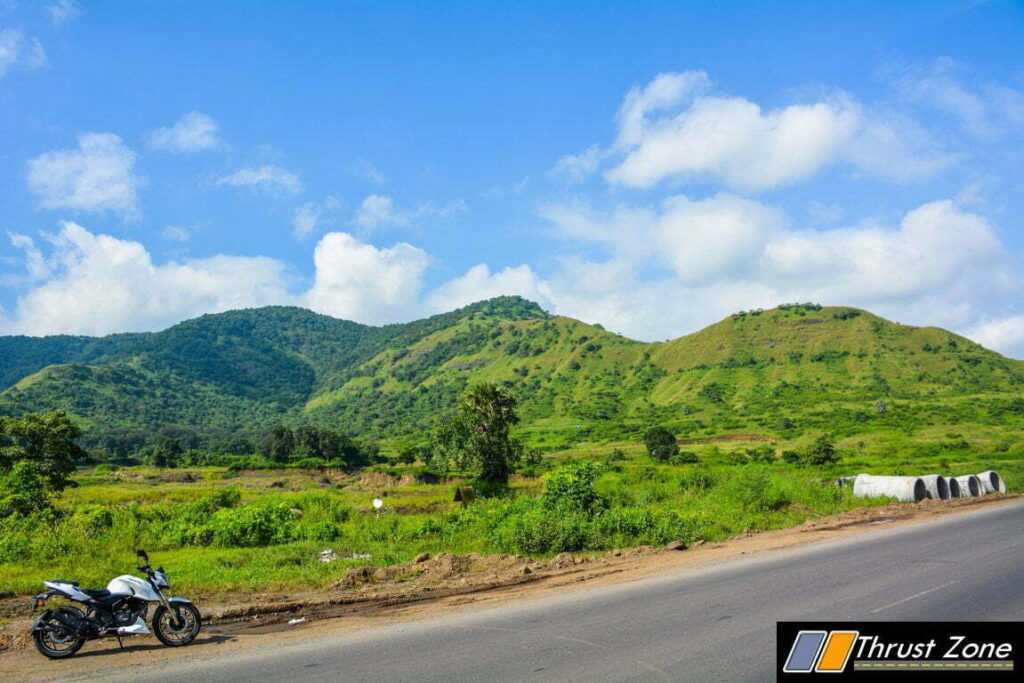 We spend real quality time with the bike and we tried to cover every aspect of the motorcycle for you. We have done the same with its direct rivals and the rivals that aren’t in the same segment but in the same price tag. Allow us to make a bold statement by saying that the Apache RTR 200 in carburetor variant is the best bike in the Rs. 1 lakh bracket. The price is on the road in major cities which makes it a deal of the decade overs the Japanese 150cc rivals. 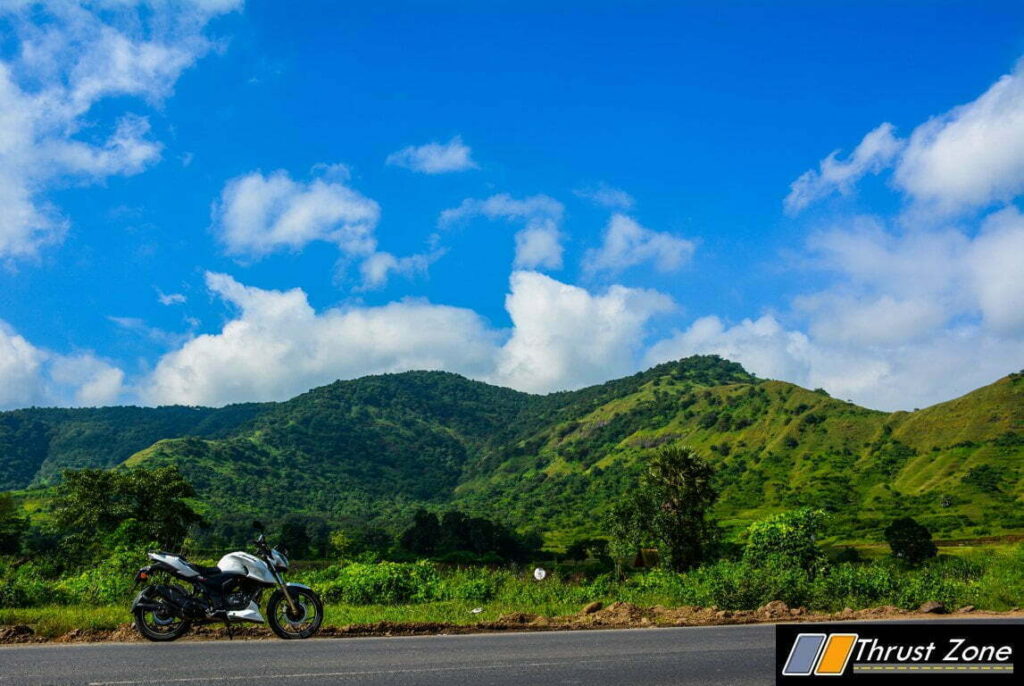 As always TVS continues to with its quality, refinement agenda along with certified best in class after sales and service. There is hardly any reason you should be skipping this motorcycle over any other bike in the sports category which falls in and around the Rs. 1 Lakh mark. If you can spend a bit more wait for the Fi and ABS variant which will sweeten the deal and offer even more for the asking price.