TVS Jupiter is one of the few scooters in the country which is the complete package one needs. The scooter is the highest award winning scooter and has turned the very best Hosur based manufacturer has made till date. The feature, essentials, the performance and practicality are on spot on. The value for money proposition and the design all deserve a mention everywhere. Today,the BSIV equipped motor has been launched and we have all the details that you need to know.

Design wise, everything is set to be the same as before. The round shape side panel, the well designed front apron and the headlamp section is the most unique of the lot. The headlights are crystal clear unit which help illumination to be segment best. Pristine white, Volcano Red, Titanium Grey, Sparkling Silver, Midnight Black, Stallion Brown, Matte Blue and new colour Jade Green and Mystic Gold are the new colors on offer.

Underbone type chassis, telescopic front forks with monoshock at the rear along with 12-inch large wheels offer best in class ride and handling package. Brakes are drum units at both ends in the base variant. Disc variant is available in ZX variant. 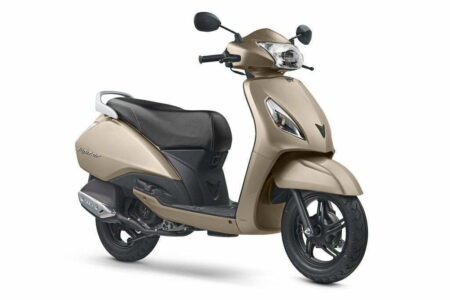 The 109cc motor makes the same 8 PS of power and 8 Nm of torque from its engine. The engine is BSIV compliant now which is the highlight of this MY2017 model. The motor has already proven to be great in ever regard and it will continue to be high on refinement, fuel economy and reliability that it is already offering.

AHO is seen on higher variant for now and it should be standard on all variants by 2019 as the safety norms will be applied as compulsory. SYNC braking system can be seen on the scooters as well. Feature list includes fuel gauge, economy and power tell-tale light, fuel warning light, LED tail-lamps, pass light feature, external fuel filler, ignition lock and storage bin light along with USB charger.